Revered by some and feared by many others, peyote is one of the most recognized psychoactive plants in the world. This cactus plays a central role in the traditions of indigenous groups all across North America. It’s also one of the most consumed natural hallucinogens and the center of innumerable controversies among governments and groups fighting for their self-determination rights. It is spiritual medicine and one of the so-called master plants associated with shamanic practices in ancient religions.

The importance of peyote is undeniable. Not only is it a fundamental part of the worldview and spiritual life of different indigenous groups, but it has also been the center of countercultural movements and heated discussions between governments and people fighting for their self-determination. More than a hallucinogenic plant, peyote is a cultural element of great importance for peoples indigenous to North America as a physical and spiritual medicine, as well as a tool for personal growth for those who consume it responsibly.

Here’s everything you need to know if you’re considering trying peyote.

What is peyote and where does peyote come from?

Peyote (Lophophora williamsii) is a plant that grows in northern Mexico and southern Texas, mainly in the desert strip that surrounds the Tropic of Cancer. In Mexico, peyote is principally extracted from the Wirikuta Desert in San Luis Potosí.

It’s a small cactus that’s bluish green in color, and, unlike so many other cacti, it does not have any spines. Peyote is a widely used hallucinogenic plant, and it’s also recognized for its medicinal properties and has historically been used to treat arthritis, stomach problems, asthma, influenza, diabetes, and poisonous animal stings and snake bites .

The lack of spines leaves the little peyote vulnerable to predators in its natural habitat. It instead has an unpleasant taste to try and prevent desert animals from eating it. Behind this peculiar taste are more than fifty substances known as alkaloids, many of which have psychoactive properties that alter the perception of reality when consumed in adequate amounts. The best known of these substances — and the one responsible for the effects associated with the consumption of peyote — is mescaline. 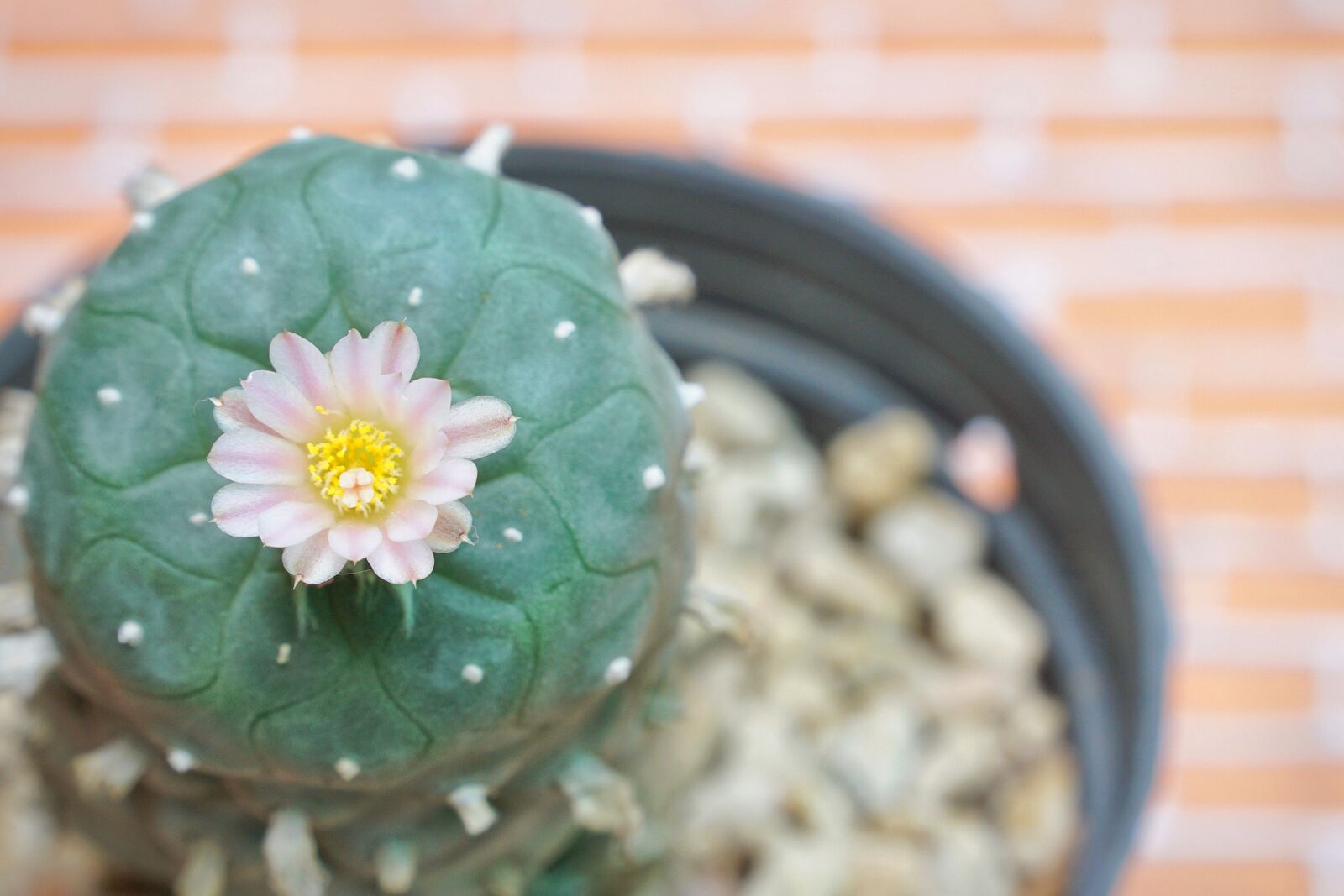 The active substance of peyote is mescaline, an alkaloid capable of causing strong hallucinations and uncontrolled states of ecstasy. The experience differs depending on the amount of mescaline consumed. A low dose can cause euphoria with extended periods of concentration and relaxation, accompanied by strong feelings of empathy. Higher doses cause visual hallucinations characterized by the presence of bright colors, geometric figures, and synesthesia (the perception that your senses are mixing with each other).

The strongest hallucinations involve loss of time-space context, depersonalization, and what many describe as the presence of the divine.

A trip with peyote can be enriching, but also dangerous. When consumed as a hallucinogen, peyote produces some physical reactions such as changes in heart rate and blood pressure, suppression of appetite, nausea, and vomiting. All of these symptoms are mild in nature and rarely pose a risk to the consumer. The biggest problem with the consumption of peyote is related to the psychological alterations it produces. These can cause changes in personality and states of excessive euphoria that could put the life of the user at risk if they are not under proper supervision.

This is why people familiar with using peyote have so many preparation rituals around the consumption of the plant. If you’re going to consume mescaline, do it with someone who has had previous experience with the drug rather than trying it on your own.

While studies are limited, research hasn’t found negative effects from longterm peyote use.

How is peyote used? 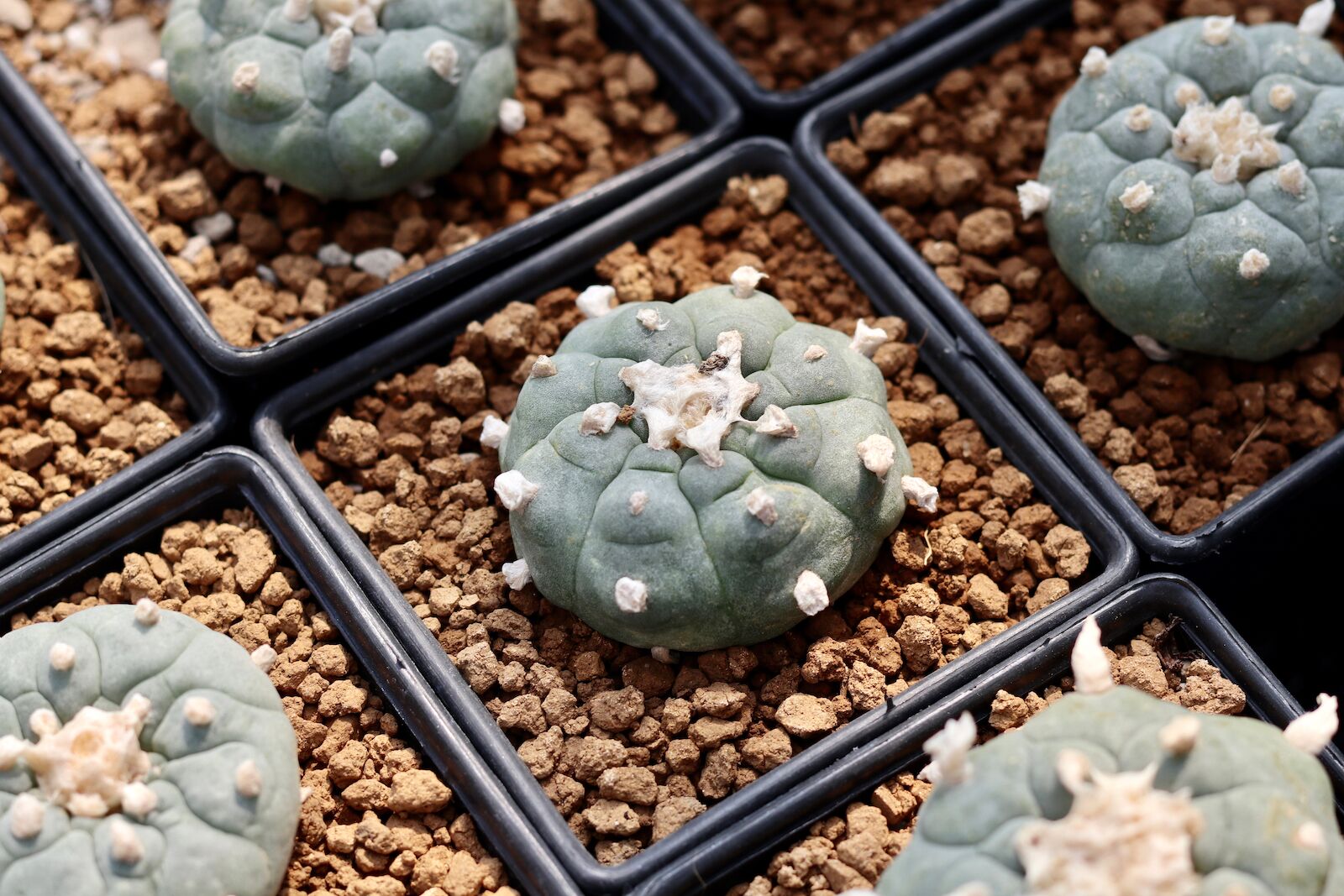 To experience the effects of peyote, one must consume the mescaline from several heads of the plant. Up to three heads of peyote is considered a low dose (depending on the size of the heads and the concentration of alkaloids). Marakame and other priests often consume more than 10 buttons to experience deep alterations of consciousness.

Peyote is extremely bitter, and is usually accompanied by a sweet drink to make the taste more bearable. It is usually consumed fresh, but it can also be dehydrated, preserved with honey, or prepared as an infusion. The effects of peyote start appearing one or two hours after consumption and can last up to eight hours.

In traditional medicine, peyote can be applied topically — either fresh or as an ointment — to relieve pain in muscles, bones, and joints, as well as to treat skin infections and superficial wounds. 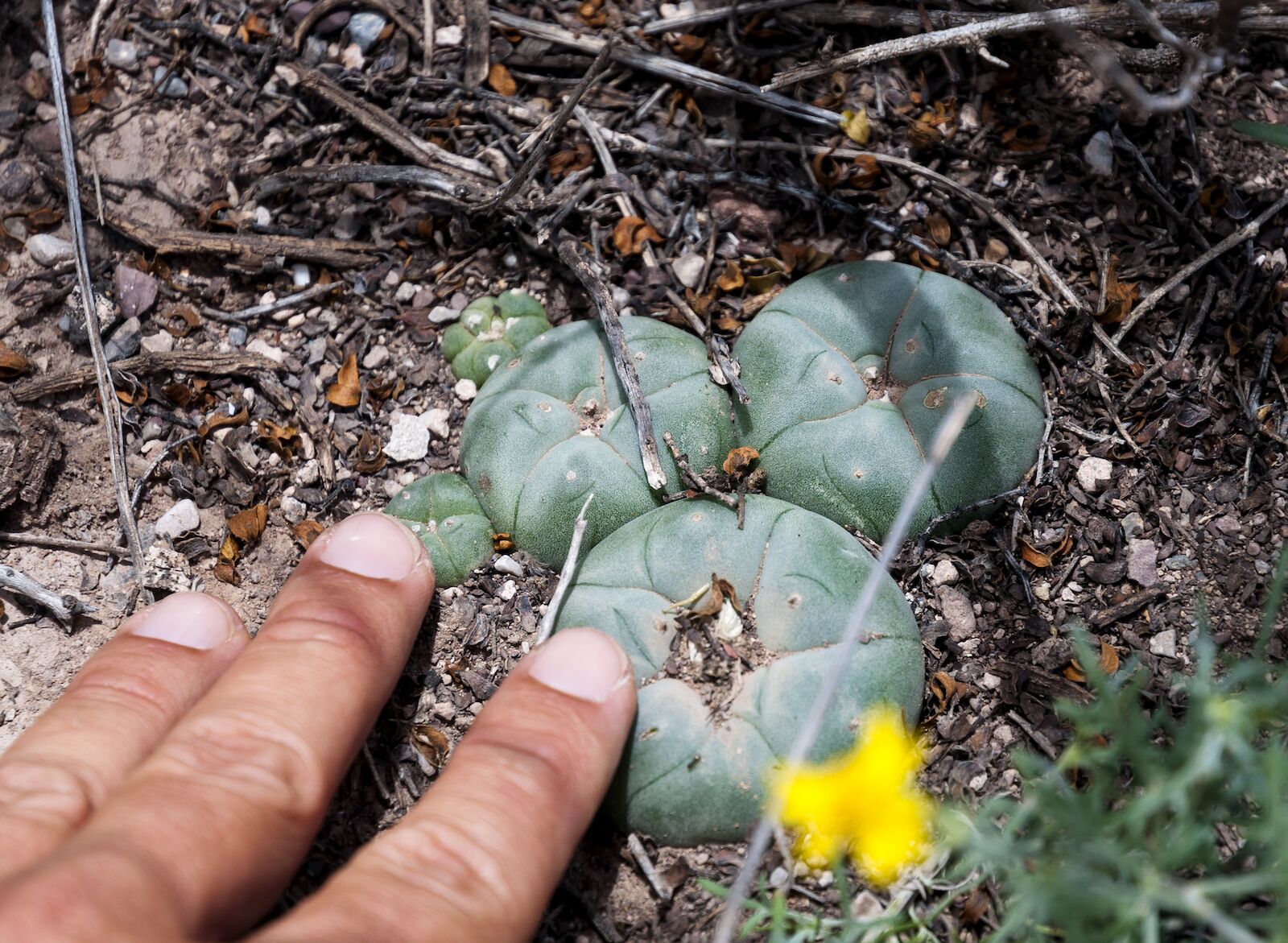 Ritual consumption of peyote is associated with the Wixarika or Huichol people in northern Mexico, but also with the Náayeri, the Tapehuánes, and the Rarámuri. In the United States, some Native American groups, such as the Kiowa, Diné, and Comanche, have also been historically associated with ritual uses of the plant. According to pre-Hispanic accounts, the Chichimecas and Toltecs in Mexico long knew about the hallucinogenic properties of peyote. There is plenty of proof that different groups have used peyote on a regular basis for at least 5,000 years.

Today, the Native American Church, founded in the late 19th century, is responsible for the largest consumption of peyote in the world. Popularly known as the peyote religion, the church has followers throughout the United States and Canada who mix Christian ideology with elements of Native American religions.

The Wixárika and other Indigenous groups treat peyote as a sacred plant and consume it for spiritual growth. However, Western societies have in most cases treated it as an illegal and dangerous plant.

In colonial Mexico, scholars demonstrated academic interest in traditional medicine and herbalism practiced by Indigenous peoples, but peyote was always viewed with disfavor. This is because the relationship of Indigenous groups with the plant contrasted with the use of other medicinal herbs. The visions and knowledge obtained from peyote and its importance within the indigenous cosmovision were not well received by the Catholic Church. Its use was immediately condemned and the plant got labeled as dangerous, sinful, and illegal. In Mexico, the Holy Inquisition vetoed any use of peyote by the 17th century, and the colonial government implemented measures to eradicate the plant and its consumption.

For the past several decades there has been a boom in spiritual tourism related to peyote. Although it is not possible to divide the world between people who should or should not have access to peyote, new age practices centered on the plant — carried out excessively and inappropriately — promote conflict between indigenous groups and local authorities, putting in risk the future of ritual practices and the self-determination of the indigenous groups associated with peyote. 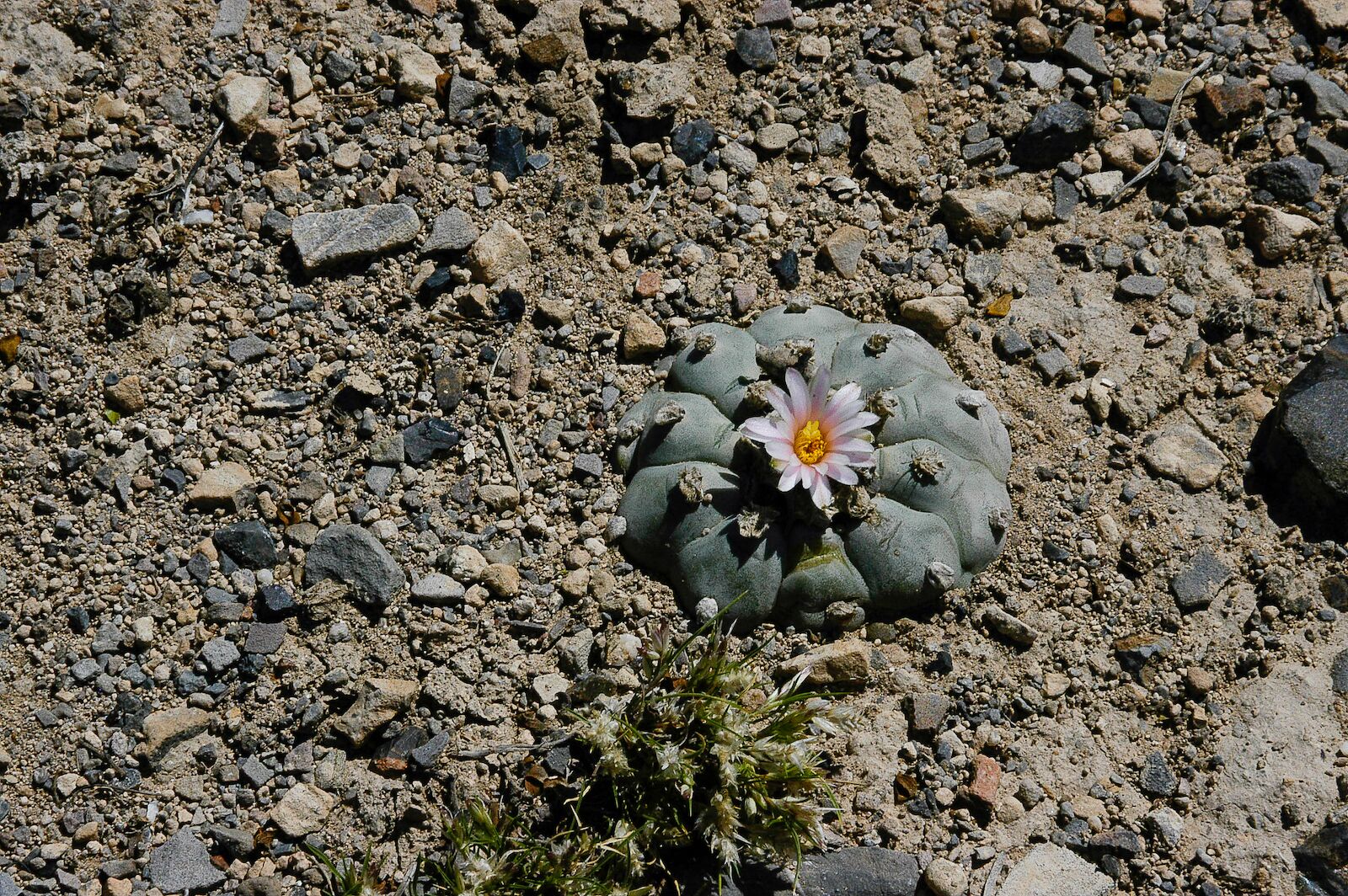 Peyote is threatened by habitat loss, but also by the increased demand of plants for psychotropic and ritual experiences. Like all cacti, peyote has an extremely long life cycle and the lack of regulation in its extraction could put the natural populations of peyote at risk, and also affect the health of entire ecosystems.

Most of the indigenous groups who are historically related to peyote have special harvesting techniques that consist of cutting off only the upper part of the plant (the sections called buttons or heads), leaving most of the stem and the roots intact. These cuts — common in the vegetative reproduction of many other cacti — allow the stem to regenerate and produce even more peyote heads in a relatively short time. Removal of the entire plant should be avoided at all costs.