SITUATED ON the plains of south-central Montana and sprinkled with oil refineries, on paper, Billings doesn’t hold the same appeal as the state’s rugged, mountainous, and notoriously scenic cities like Bozeman and Missoula. However, it turns out that the state’s most populous city (109,843) is called “Montana’s Trailhead” for a reason. Over the last 18 months, more and more remote workers from big cities around the U.S. are discovering its appeal. With its many breweries, creative cuisine, and outdoor recreation offerings, Billings is becoming a hub — and it’s about time.

“I’m 30 minutes from world-class trout streams,” says Nick Steen, chef and general manager at Walkers Grill, which in itself encapsulates all that is surprisingly enticing about Billings. “I can mountain bike all around me. I’m an hour away from skiing. On top of it all, I have an incredible education system for my kid. There’s more culture here, too, because it’s a bigger city than a Bozeman or a Missoula.“

The recent wave of remote workers has begun setting up shop around town – in local coffee shops, breweries, and distilleries (the Billings Brew Trail is a mile-long stretch in downtown along which you can hit 11 breweries and distilleries). They’ve even begun saddling up at Walkers’ bar.

“They sit themselves in the corner of the bar and work from here,” Steen says. “When Covid hit and people got to work remotely, some people were like, home can be anywhere, why not Billings? It’s not as beautiful as Bozeman, but damn, it’s pretty. It’s also affordable. I have a friend who just moved back from Seattle. He sold his 1,200-square-foot townhome there for a million dollars and bought a brand new, 3,000-square-foot home here for a half million.”

Steen is a Billings native. He spent 13 years living in Big Sky and Bozeman and turned down job offers in Austin and San Diego for the opportunity to move back to Billings and take up the role of executive chef at the historic Northern Hotel before moving onto the opportunity at Walkers.

“After working at dude ranches and hotels, I wanted to do my own thing,” Steen says. “I didn’t want to be pigeonholed. We’re trying to make ourselves relevant in a regional market. We’re in Billings, so we have to do some things that people expect. If you live in Billings and don’t serve steak, you’ll be in trouble. But most steakhouses are buying beef from the same company, so for us, it was time to be something new. We can tell you exactly where our steak comes from. We can source-verify everything on our menu.”

Billings’ largest industry, as it turns out, is not oil, but agriculture. This is evident every Saturday from spring through fall when several blocks of downtown become a sea of tents selling fresh produce, cheese, meat, fish, honey, sauces, crepes, chocolate and tasty treats of all sorts at the Yellowstone Valley Farmers Market. Walkers’ menu changes regularly depending on what is seasonally fresh, but in late September, you’ll find succulent pork soaked in sliced apples so sweet the dish is reminiscent of a fresh Danish, crispy brussels sprouts bursting with flavor from one of Steen’s secret sauces and eye-popping whiskey cocktails tinged with festive autumn spice. A semifinalist for a James Beard award, Steen has quickly gained notoriety as one of the finest chefs in Big Sky Country. 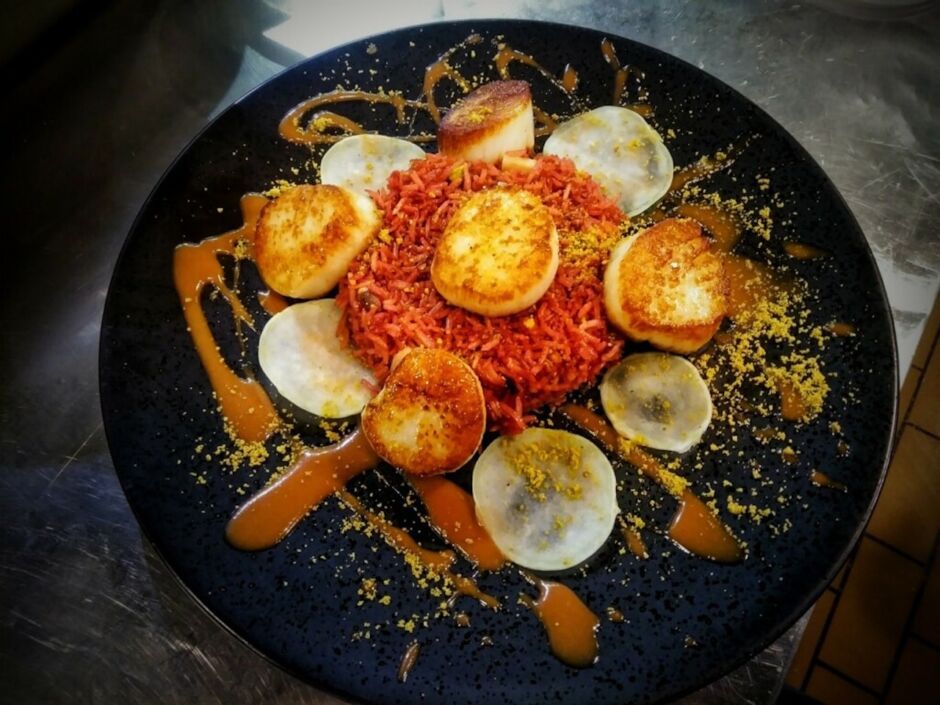 “The cool thing is, there’s still all of the stereotypical elements you’d expect to find here,” Steen says. “This is a blue-collar town. This is an oil town, a cattle town. We still have cattle drives. This is a place of working-class people. For the younger of us, we want to put our heads down and do a good job of keeping it real but also making it new and exciting.”

While Walkers is Billings’ fine-dining standout, it’s not downtown’s only farm fresh culinary haunt that ventures beyond the boundaries of the predictable, overpriced steakhouse. Bin 119 puts a creative, gourmet spin on pub fare, its lunch dishes (ex. crab cake burger slathered in housemade coconut curry sauce or cheesy chicken & artichoke panini) filling and affordable. The elevated comfort food at The Marble Table sees a line out the door on weekends and the savory and sweet varieties of waffle-pressed biscuits at The Sassy Biscuit hit the spot on cold mornings as do the mountainous skillets (including a vegetarian-friendly version with meatless sausage) at Bernie’s Diner. Sweet tooths shouldn’t miss the salted caramel chocolate balls at Brockel’s, which has quietly been conjuring up local chocolate treats for 40-plus years.

Of Billings’ impressively robust lineup of breweries, Uberbrew is a step ahead, especially its Great American Beer Festival gold-medal-winning unfiltered wheat beer (White Noise) paired with a giant pretzel. With two locations in downtown, Thirsty Street Brewing is another hot spot, its Lemon Drop sour a refreshing sipper for warm afternoons and its rotating porter reliably warming on cold days. 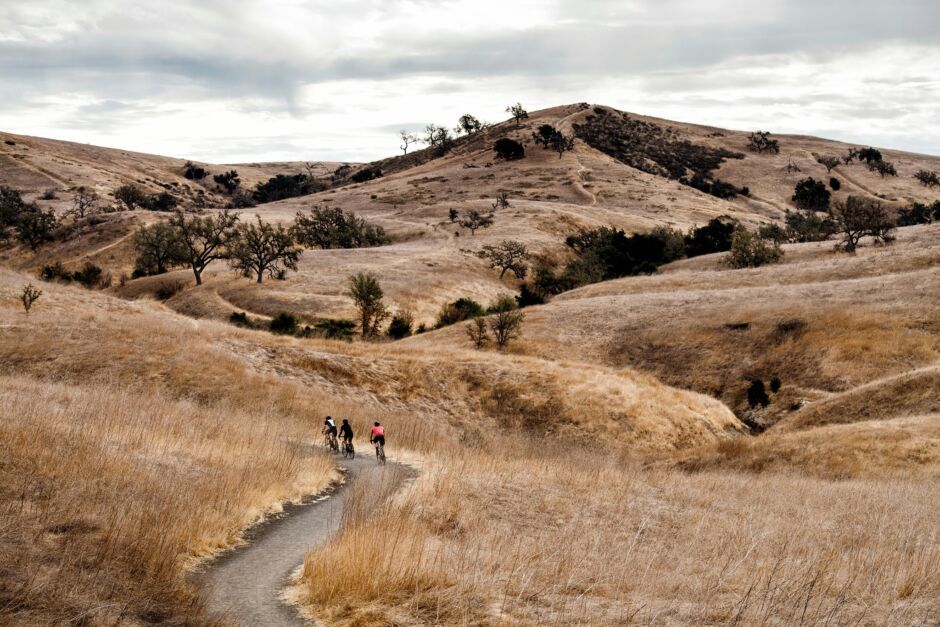 Contrary to what you may have heard and even to your own view across the horizon, Billings is not entirely surrounded by plains. A wall of stunning sandstone cliffs – the Rimrocks – enclose the northwestern side of the city. Swords Park, featuring a few miles of paved trails and footpaths among its sandstone dunes, offer sweeping panoramas of the city for walkers and runners.

Zimmerman Park, also located atop the Rimrocks, features about 15 miles of singletrack, much of it hilly and technical, meandering in and out of hidden pine forests, a pedal-in paradise for mountain bikers as well as trail runners. The city’s mountain bike scene is quickly gaining traction thanks to its resident bike shop (which happens to be the largest in Montana) – The Spoke Shop. Shop owner Dean Cromwell along with his family and team of avid mountain bikers (who regularly race e-bikes on local trails and are not afraid to catch air or rip through rock gardens) spearheaded and built the Acton Recreation Area. Lying about 30 miles outside of Billings at the end of a gravel road, Acton is a true oasis disguised amid the plains, home to 30 miles of pristine singletrack full of flowy turns, jumps, pine forests and rocky valleys. Pictograph Cave State Park is another gem located just 8 miles from downtown Billings, home to a series of caves marked with 2,000-year-old rock art by the area’s earliest human inhabitants.

Keep in mind that the Yellowstone River runs directly through town, sections of its water and tributaries prized among anglers for trout fishing and others offering tranquil stretches of paddling and even swimming (Duck Creek) in the summer months.

Lastly, for winter sports, Red Lodge is one of Montana’s best-kept secrets. Its ski area offers nearly 2,000 feet of vertical and about 60 trails, its daily lift tickets about a third the price of most resorts. The charming town of Red Lodge lies less than an hour’s drive from Billings and also serves as the nearest gateway to Yellowstone National Park (an additional two hours’ drive on the stunningly beautiful Beartooth Pass, which is closed in winter), and abounds with numerous hikes, mountain bike trails and alpine lakes accessible from the city in less than two hours.

“Billings is definitely coming out on the map as a cool place to live,” Steen says. “For people coming from a big metropolitan area, it’s not too big, not too small. Any kind of recreation you want is less than an hour away. We have more award-winning breweries than most cities, great food, culture and a super-easy airport. It’s a comfortable life here.”

NewsMontana Is a Hot Destination for Remote Workers, but Not Everyone Is Happy About It
Tagged
Beer Cycling Restaurants + Bars
What did you think of this story?
Meh
Good
Awesome