Wild horses represent ideals of unbridled freedom and are an iconic symbol of the American Old West. First descended from Iberian horses brought over by Spanish explorers in the 16th and 17th centuries, today, mustang herds roam not only grasslands and deserts, but coastal regions as well. That includes the Outer Banks in North Carolina and Nova Scotia’s remote Sable Island. And by the way, the name “mustang” actually comes from the Spanish word “mestengo,” meaning “stray beast.”

Thanks in large part to early animal rights advocate Velma Johnston (a.k.a. “Wild Horse Annie”), Congress passed the Wild Horse Annie Act in 1959 to ban the use of vehicles to hunt and chase wild horses on federal lands. That was followed by the Wild Free-Roaming Horses and Burros Act of 1971, which made the Bureau of Land Management (BLM) and the United States Forest Service responsible for protecting and managing wild horses.

But this legislation has not been without controversy, and differences between Congress, ranchers, conservationists, and the BLM have made wild horse management a contentious issue. Thankfully, advocates have rallied to defend wild horses for decades, helping to suspend or stop government roundups and work to manage herd population sizes humanely.

Are there still wild horses in the US? 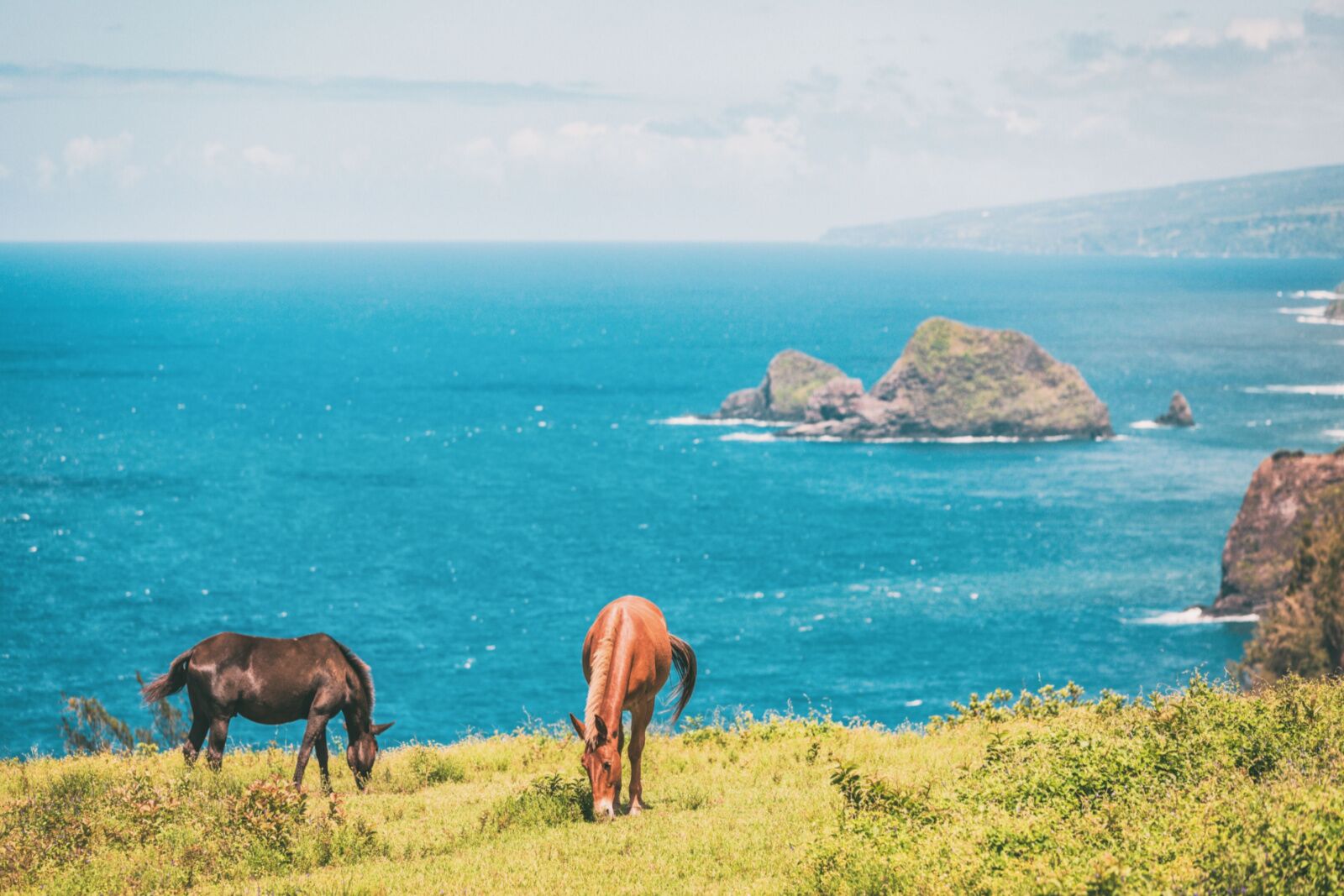 Yes, there are still many places where there are wild horses in the US. It’s currently estimated that around 86,000 wild horses live across 10 western states. There are even wild horses in Hawaii – the Big Island’s secluded Waipio Valley is home to a small but hardy herd; however, access is restricted for the foreseeable future due to safety and road access issues.

Whether you prefer to kayak, hike, take a boat trip, or ride out on (domesticated) horseback, there are plenty of places and ways to see the most famous and celebrated herds of wild horses across America and Canada, many of which are considered national treasures.

As with viewing any wildlife, keep a 50- to 100-foot distance and turn off your car engine. Never try to feed, touch, or follow the horses, and always keep dogs on a leash. Be respectful of their space and behavior, especially mares and their foals, or stallions (males) challenging one another.

Where to see wild horses in the US 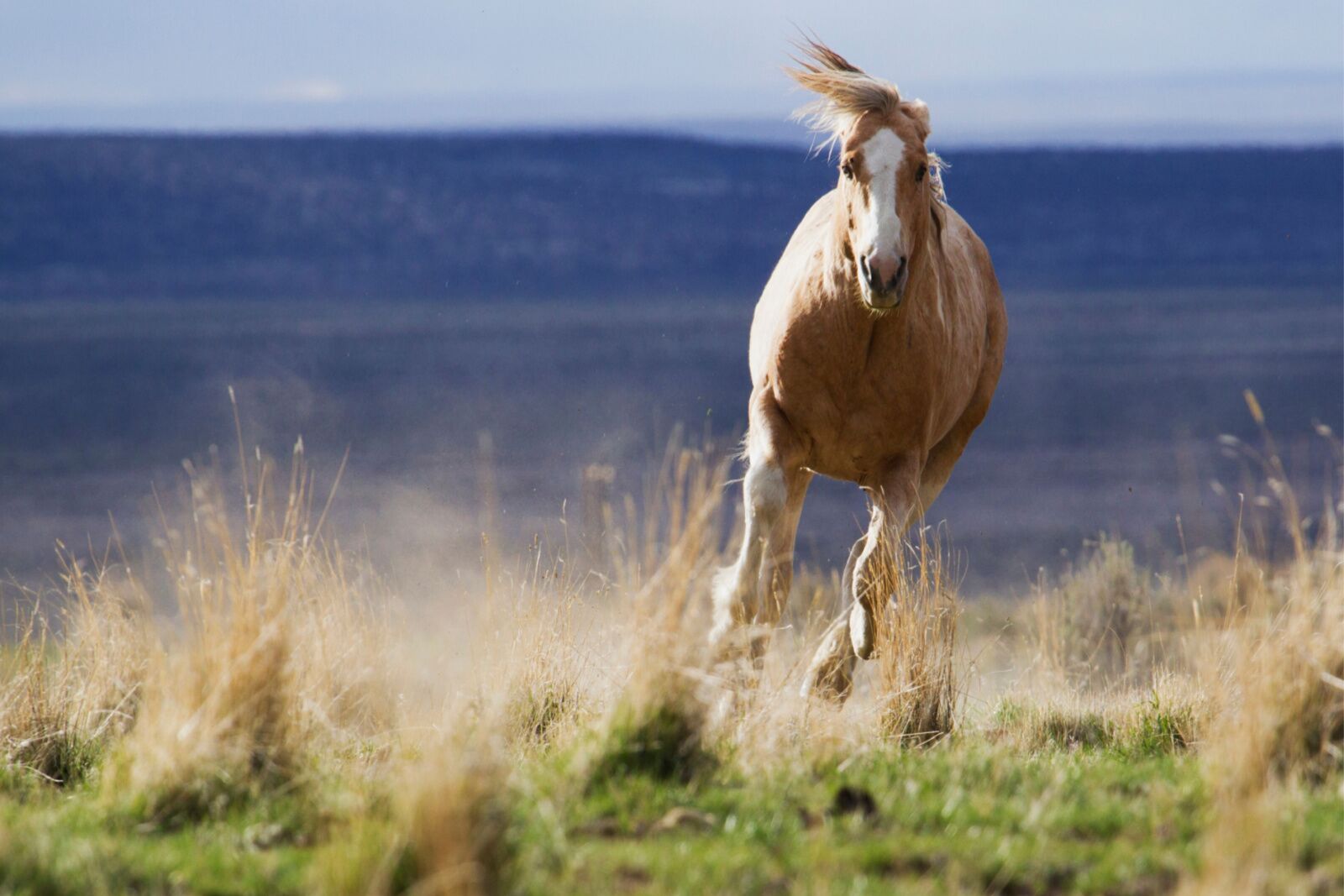 One of Oregon’s most rugged and remote locations is also home to one of the country’s most magnificent wild horse herds – the Kiger mustangs. They’re known for their light brown bodies, dark tails, and semi zebra-striped legs. They’ve long been associated with the Wild West, and Steven Spielberg’s DreamWorks studio purchased a Kiger mustang colt to use as its model for its 2002 animated feature film “Spirit: Stallion of the Cimarron” about the life of an 18th-century wild horse in America.

The best way to view Kiger mustangs in the wild is on a guided ride with the Steens Mountain Guest Ranch or by setting up camp for a night at the South Steens Campground. 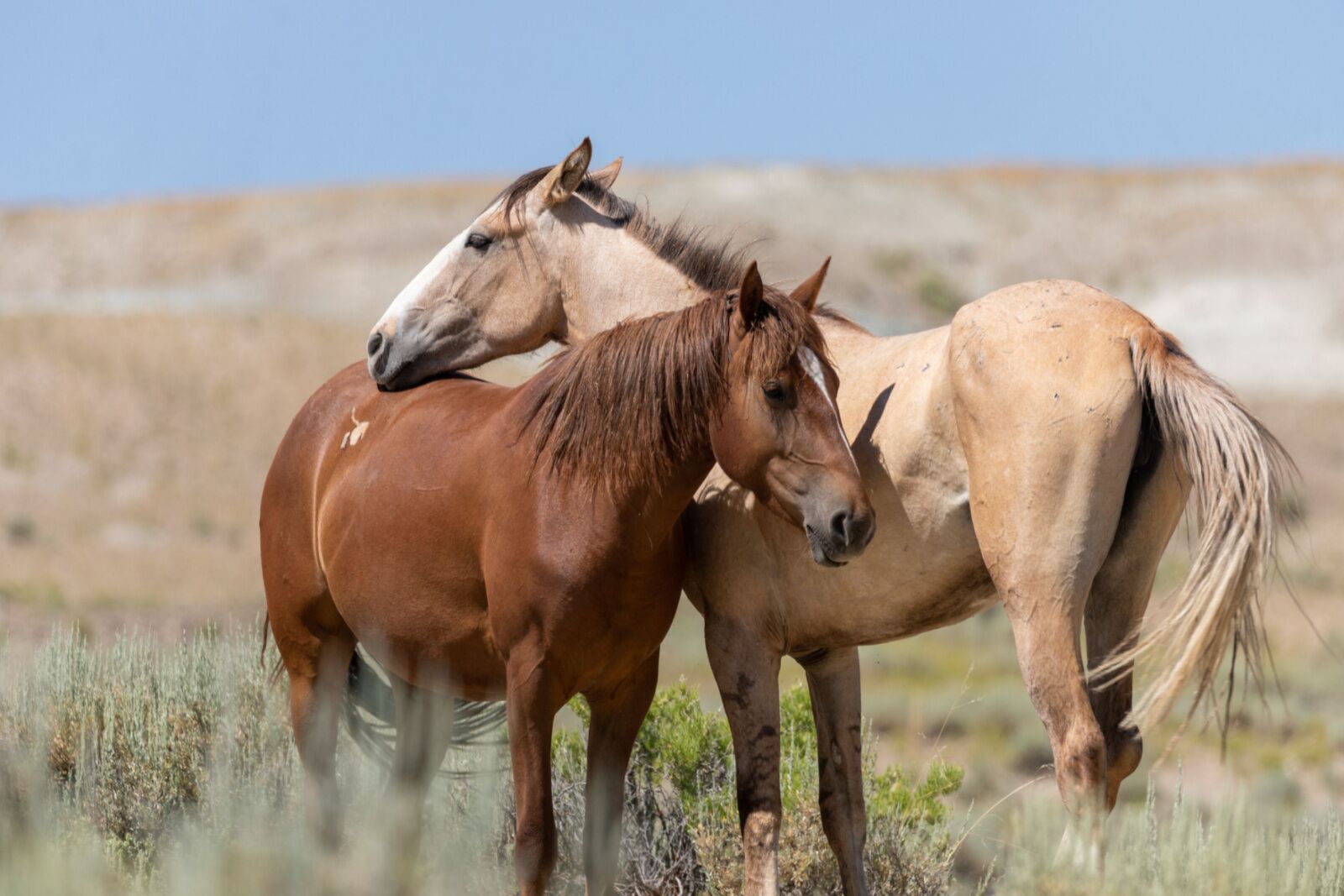 It would be remiss to talk about wild horses without mentioning potentially America’s most famous one – Picasso. The handsome pinto stallion was a fixture of the Sand Wash Basin HMA (Herd Management Area) for more than 30 years, drawing fans from around the world. The HMA is in the northwest corner of Colorado and most roads are gravel, dirt and, sand, so a high clearance AWD or 4WD vehicle is recommended. First-time visitors can follow the “Wild Horse Loop” (marked in red on the map) to look for new stallion stars, Hoot, Jasper, and Cresciente. 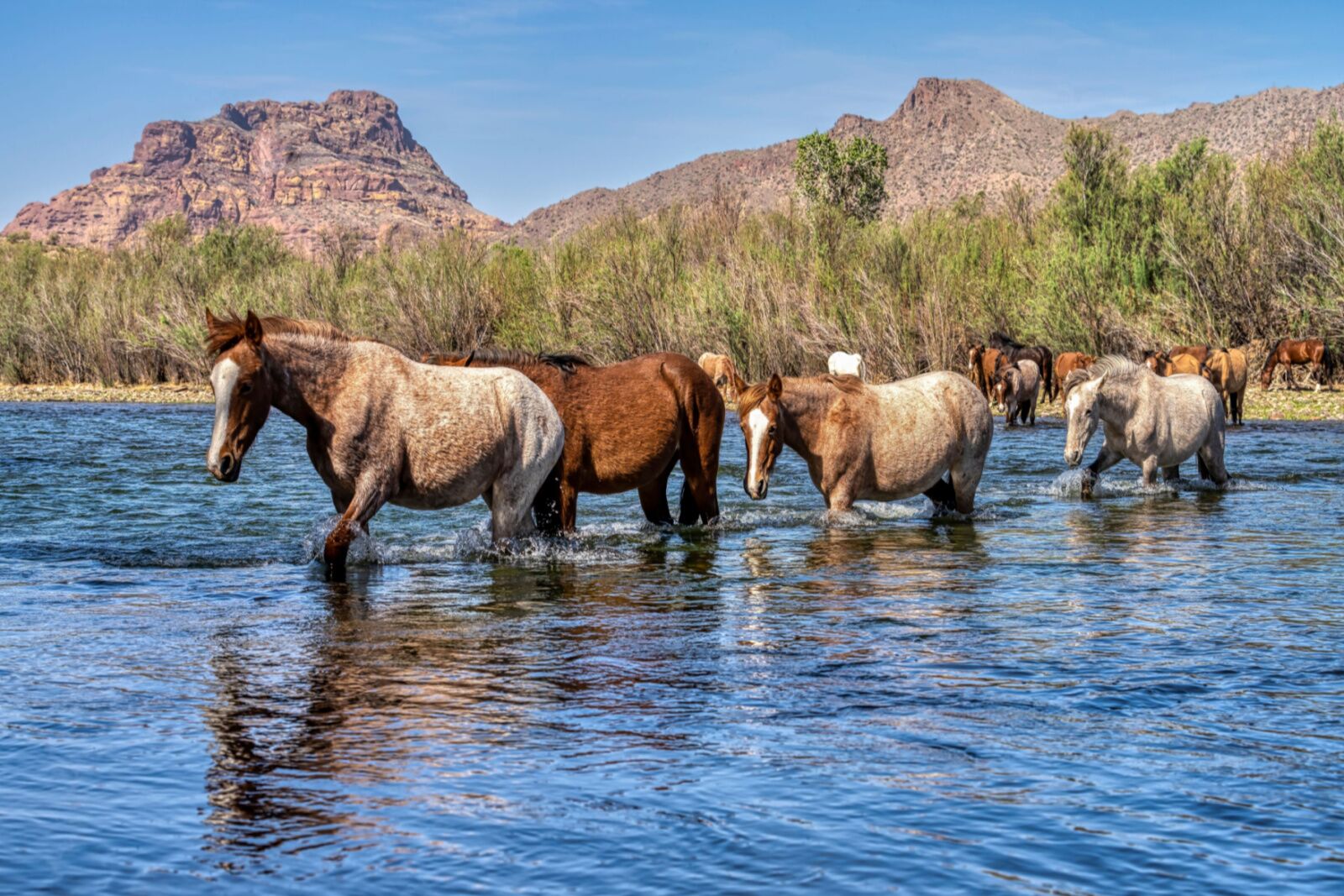 Wild horses had lived around the Salt River in Mesa long before the Tonto Forest received its national forest designation in 1907. Saved from removal five years ago by the non-profit Salt River Wild Horse Management Group, visitors today can usually see families of horses at recreation sites along Bush Highway, including Coon Bluff, Phon D, and Pebble Beach. You’ll need to purchase a Day Use or Discovery Pass to park in or explore Tonto National Forest.

Booking a kayak or paddleboarding trip is probably the most popular way to see the horses during the warmer months when they come to swim and cool off along its banks. 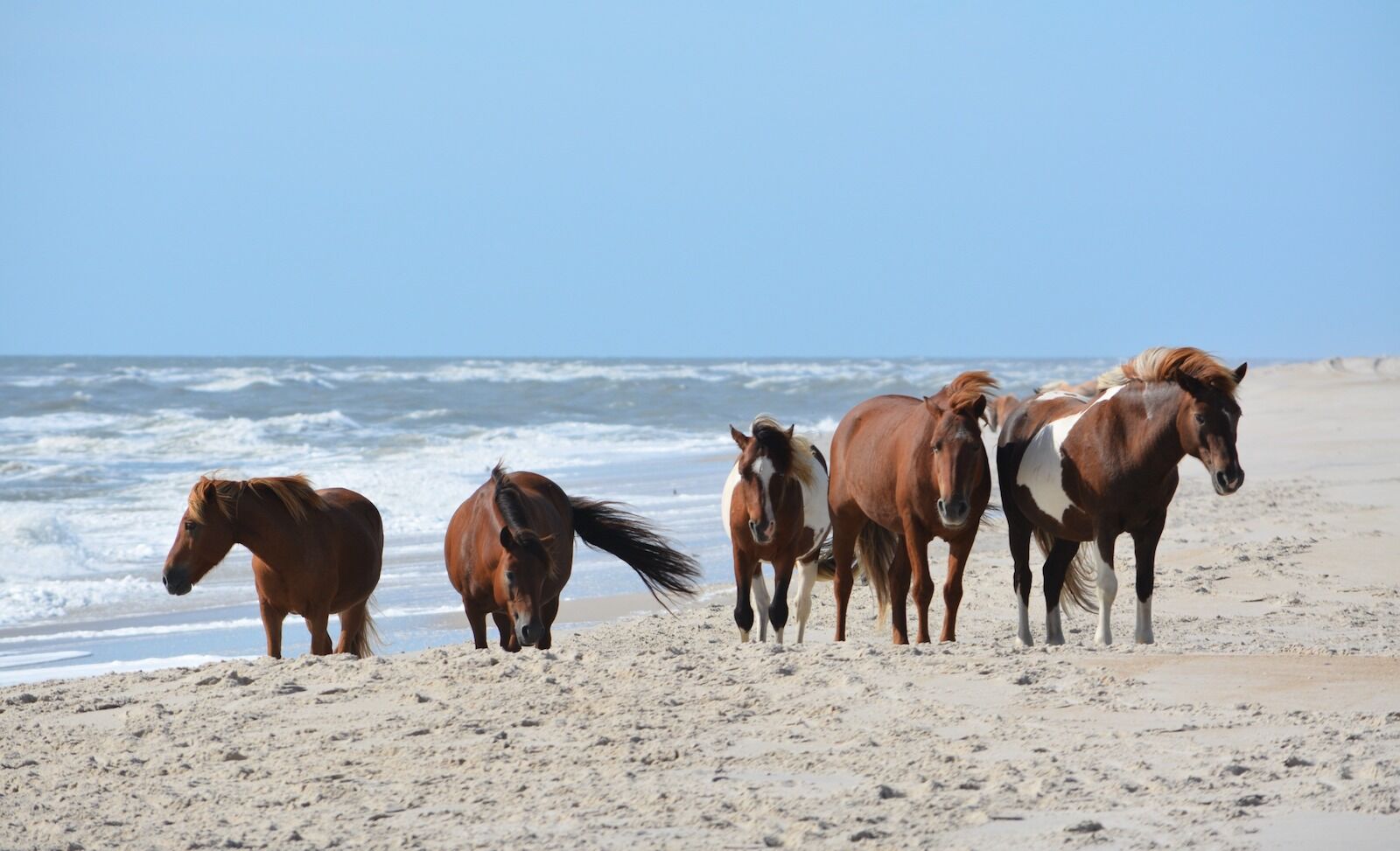 A barrier island isn’t the first place that comes to mind when thinking about wild horses, but 300 of them freely wander the beaches and park roads on Assateague, and kayaking or taking a day cruise are popular ways to see them. Once thought to be descended from horses that swam ashore from a Spanish galleon, historians now believe they’re descendants of horses brought over to graze from the mainland.

The Maryland herd roams the Assateague seashore and is managed by the National Park Service, while the Chincoteague Volunteer Fire Company privately owns the Virginia herd. Every July, “Saltwater Cowboys” – mostly firefighters and volunteers – swim the Chincoteague ponies across the channel at low tide to auction off foals before swimming adult horses back again. 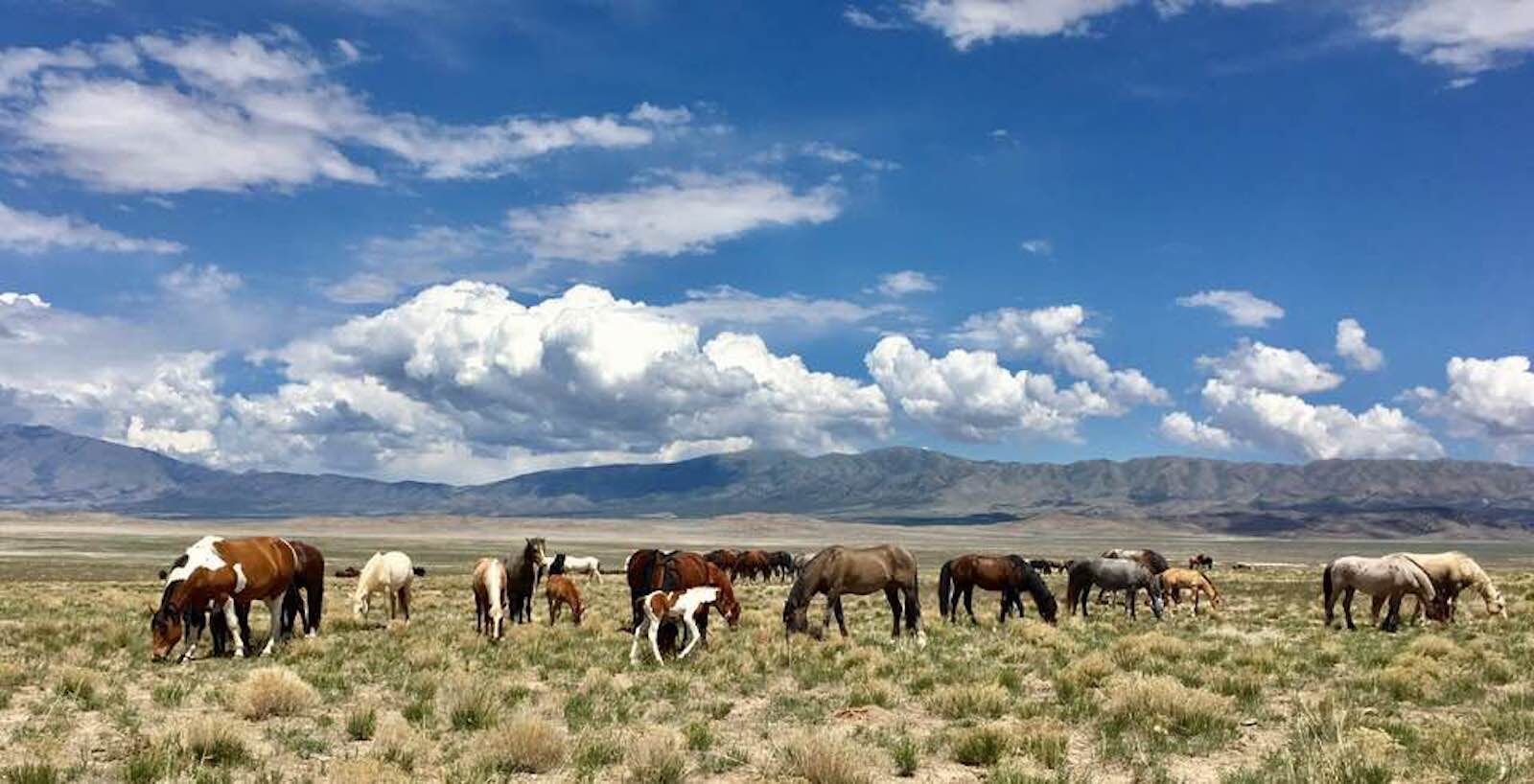 The foothills between Rush Valley and Vernon are the best places to spot the wild horses of the Onaqui Mountain Herd, reachable with an easy 60-mile drive southwest of Salt Lake City. It’s thought that US cavalry and early settlers brought horses to this area in the late 1800s. It’s a relatively large herd with around 450 horses.

One band lives along The Pony Express Road, once used by the famous mail delivery service of the late 1800s. Take I-80 west to Exit 77, then turn left at the stop sign and follow UT-196 to the Dugway Proving Grounds main gate. A dirt road west of the church will take you to Pony Express Road, where you should be able to see horses of all colors and patterns, including sorrels, roans, pintos, and palominos. 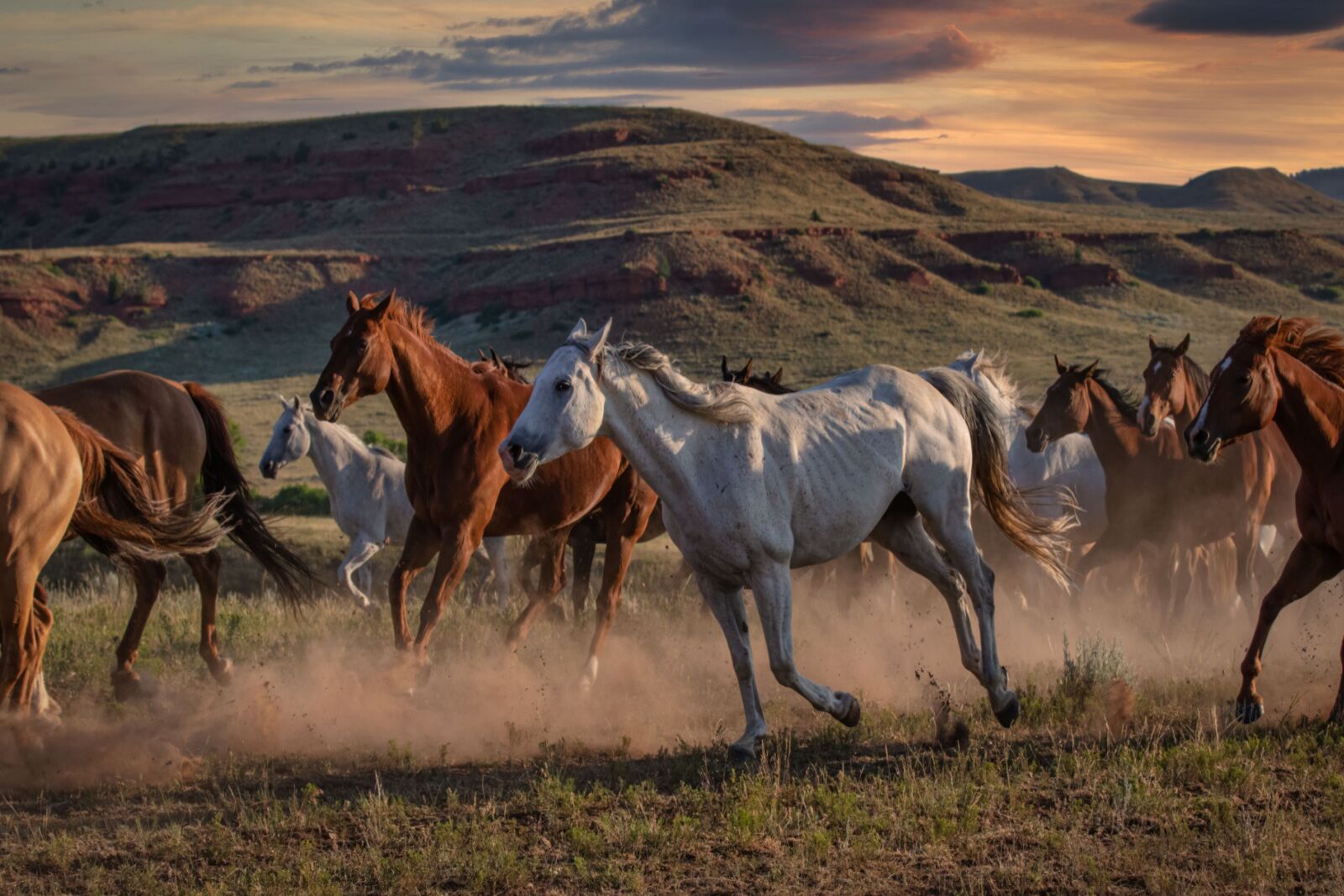 The first nationally designated area established to provide a home for free-roaming wild horses, the Pryor Mountain Wild Horse Range is home to around 120 members. It’s 50 miles south of Billings and covers acres of desert shrubbery and subalpine forests across its roughly 43,000 acres. It straddles the southeastern section of Carbon County, Montana, and northern Big Horn County, Wyoming – about as quintessentially “Wild West Country” as you can get.

Stop by the Pryor Wild Mustang Center in Lovell for maps and directions on where best to catch a glimpse of the horses. For an organized activity, the best way to see Pryor Horses in their homeland is on a Jeep tour with local outfitters Pryor Wild, which runs tours May through September. 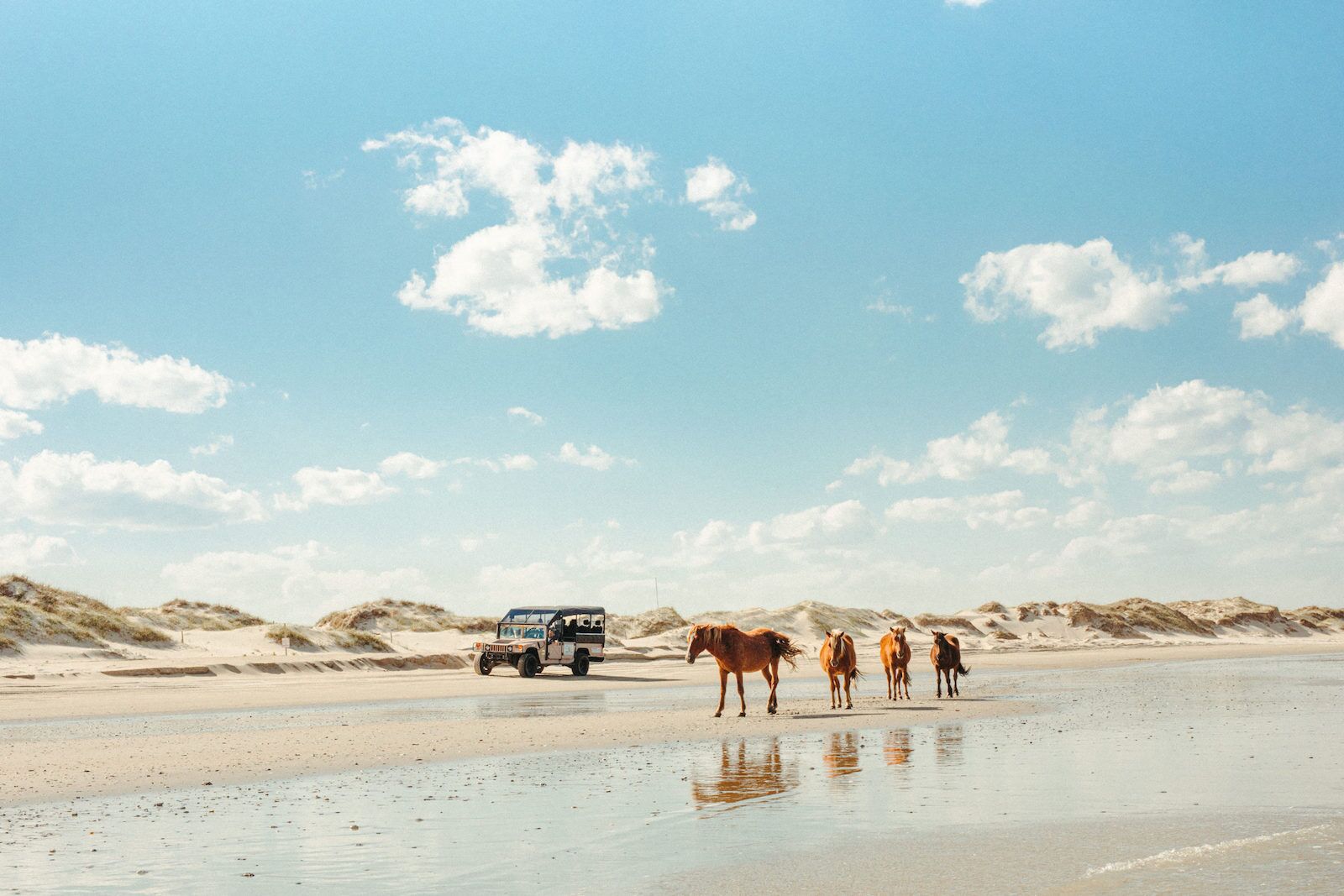 Get behind the dunes with a self-guided walking tour or take a Wild Horse Adventure Tour to see the famous Colonial Spanish Mustang wild horse herd that roams Corolla and Carova beaches in the northern Outer Banks. There’s also a second wild herd at Shackleford Banks on the Cape Lookout National Seashore. Historical research and genetic testing indicate that the present-day Ocracoke and Corolla wild horses descend from Spanish breeds whose history dates to the 1500s. 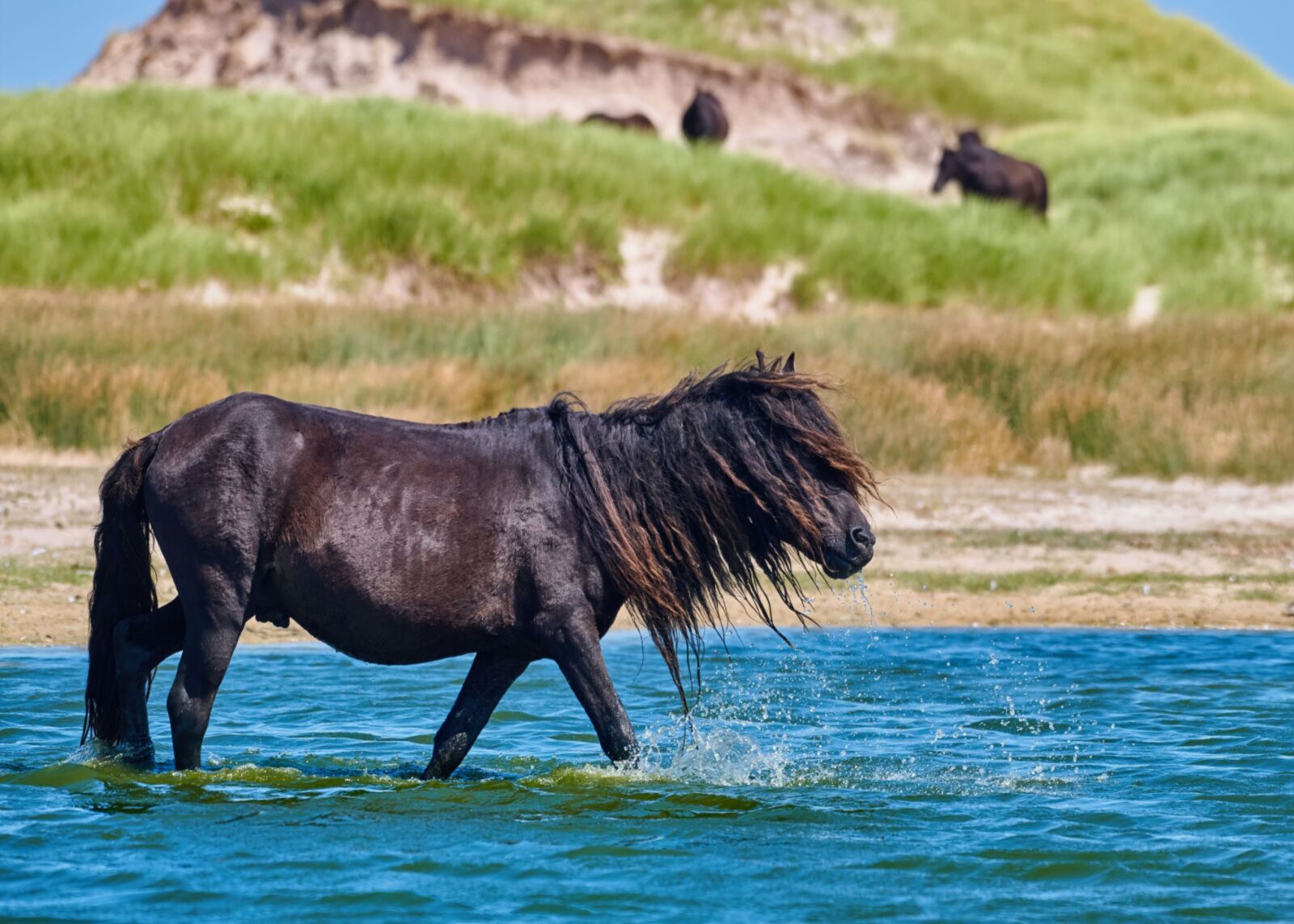 More than 100 miles off the Nova Scotia coast, Sable Island became Canada’s 43rd national park in 1993 and is a testament to survival in an unlikely environment. Its hardy, pony-sized wild horses, introduced in the 1700s and federally protected in 1961, roam freely, sharing the island’s sandbanks and beaches with the world’s biggest breeding colony of gray seals.

Visitors can arrive by charter boat and plane between June and October but should be prepared for weather delays, which can run for days. An employee-guided, two-hour walk with Parks Canada costs $153.50 on top of the $25.50 day-use fee. You can also book flight and tour combos with Kattuk Expeditions or Breton Air.

OutdoorI Spent a Weekend at a Dude Ranch in California. This Is What It Was Like.
Tagged
Outdoor Wildlife Nova Scotia, Canada
What did you think of this story?
Meh
Good
Awesome