Zambia is commonly referred to as the “Adventure Capital” of Africa, and whitewater rafting down the Zambezi River is the adventure of a lifetime. Getting their energy from the world’s largest waterfall, the rapids of the Zambezi are some of the most challenging — and most thrilling — you’ll find anywhere on earth. On the list of extreme sports, rafting the Zambezi River should be its own category.

Victoria Falls — the smoke that thunders 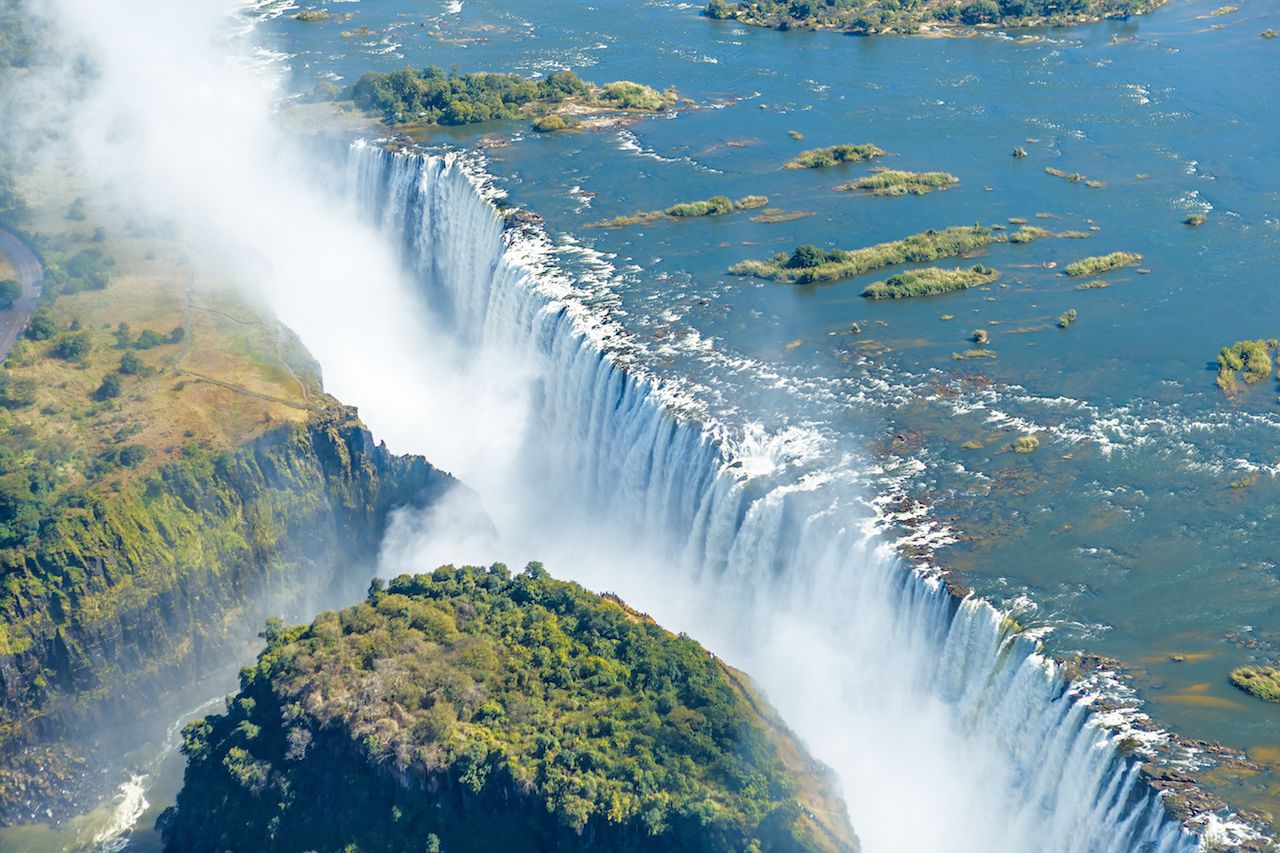 The mighty Zambezi River flows 1,600 miles through six countries and, for much of its length, forms the border between Zambia and Zimbabwe. The river feeds Victoria Falls, the largest waterfall in the world, stretching an astounding mile across and reaching 2,900 feet high. Known locally as Mosi-oa-Tunya, or “the smoke that thunders,” Victoria Falls is the magnet that draws thousands of people to Zambia and Zimbabwe every year.

At Victoria Falls, the Zambezi River hurtles down with no sign of the bottom; all that’s visible is a boiling swirl of clouds pierced by a series of rainbows. It’s here, just after the Zambezi takes its awesome plunge down one of the Seven Natural Wonders of the World, that you begin your own descent down the fierce river.

There are 25 rapids to face going down the river, many of them being Class 5 rapids. This part of the Zambezi is set deep within sheer black cliffs with lush greenery and the African veld (grasslands) looking down on you. You can admire all this from a little red raft — when you dare to look up from the swirling water ahead of you. The magnitude of your surroundings reminds you just how small we are.

Feelings of exhilaration and panic 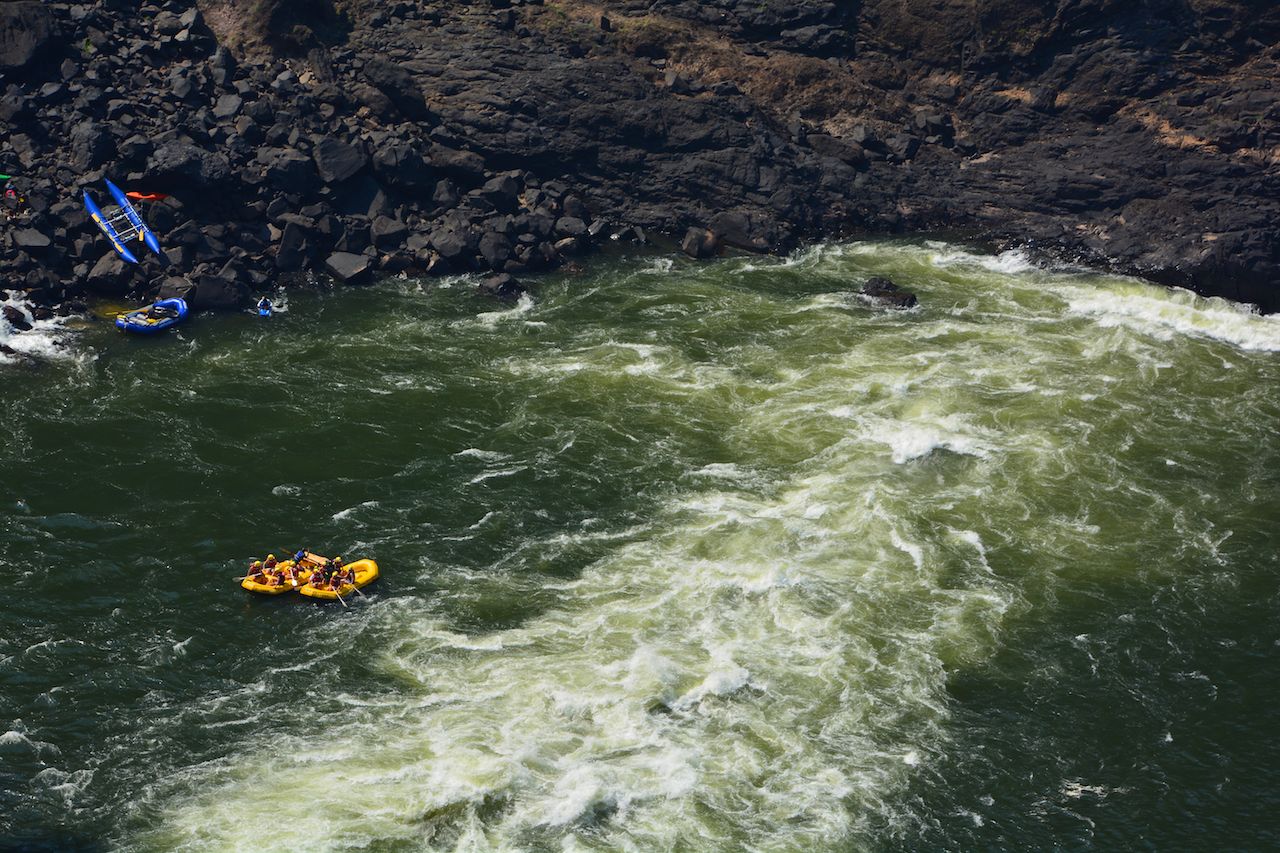 Adrenaline starts coursing through your body before you even tackle the first rapid. After asking what’s the worst thing that could happen and getting “death” as a response, you know you have to brace yourself for the journey to come. Your main focus will be trying to remember the safety instructions. These consist of listening to your river guide and keeping your feet pointed upwards if you do fall in — so that they don’t hook on rocks. Above all, you want to keep yourself in the raft. Keeping yourself in feels like an especially important goal after you see a crocodile slide into the calmer water not so far away. You’ll flit between the ambivalent feelings of exhilaration and panic, giving you an intense sensory thrill.

Class 5 rapids are the highest level rapids that are commercially available. Class 6 are the most difficult and dangerous rapids, so that puts the Zambezi rapids into perspective. At one point you will come across a Class 6 rapid. Everyone has to get out of the raft and walk along the side of the cliff while watching as the guides conquer the rapids alone. It’s a spectacular sight to see but — unless you know what you’re doing — not an enviable task.

The guides — nerves of steel and a sense of humor 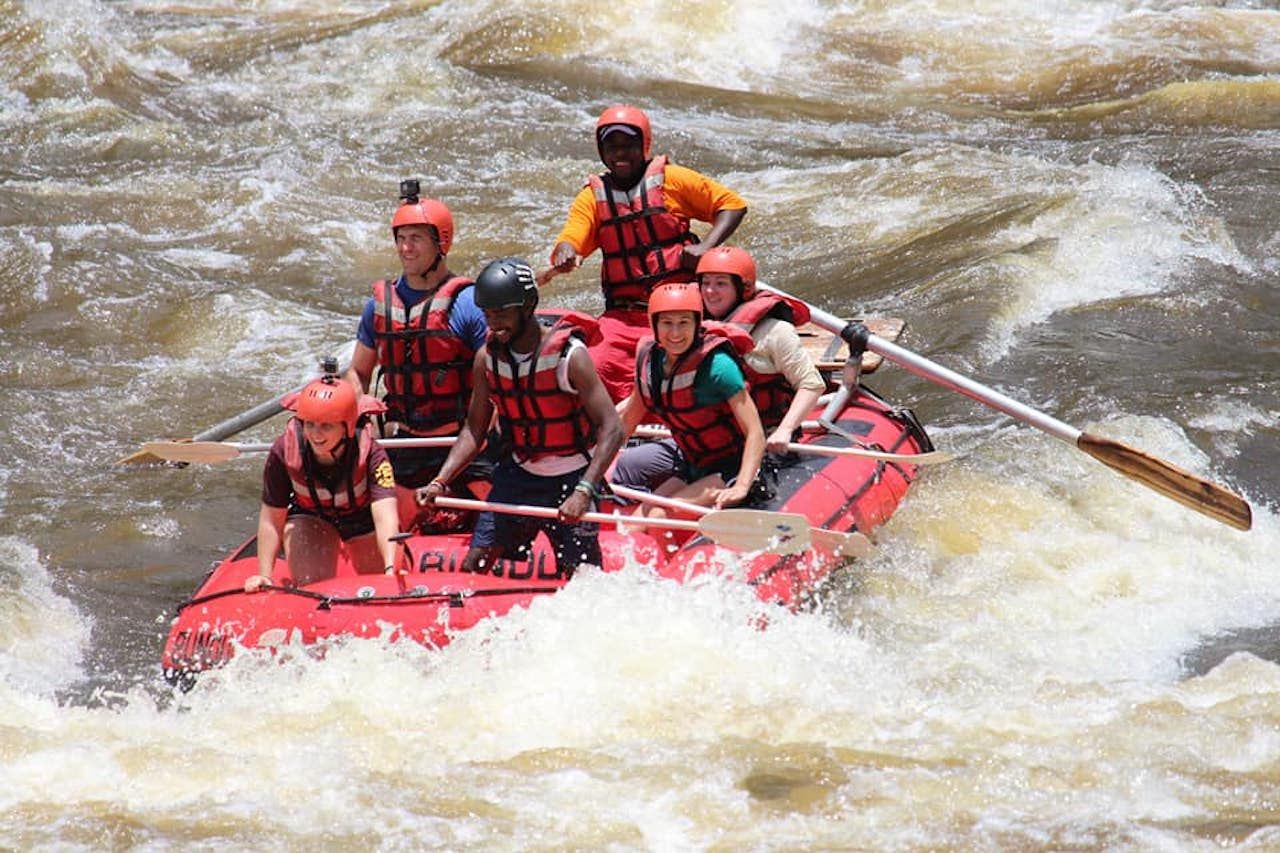 Our river guide was Doc, a shortened version of his nickname, the River Doctor. Doc was given this name after spending many years as a river guide on the Zambezi and having trained many of the guides who still operate today. He left life on the river after losing a friend to it. Doc has a gammy leg and walks with a limp since he tried to rescue his friend who was a kayaker on the whitewater rafting trips. The kayak flipped over, and he was unable to flip himself back up.

This was a tragic wake-up to the dangers of the river. Yet Doc’s easy smile, quiet confidence, and lightheartedness set us at ease — even after seeing his photographs of a client whose foot was bitten by a crocodile. Doc was able to convince his old company to let him be our guide for the day. After his stories, I probably would not have done it with anyone else. Doc refers to river rafting on the Zambezi as “the Everest of whitewater rafting.”

The guides from the three other rafts exuded the same confidence and calmness as Doc. They would disrupt moments of fear and panic with jokes and silliness. Many of the guides go by their nicknames, one being Potato. I’m not sure about any resemblance to a potato, but he got lots of laughs. Even if the adventure is an unpredictable one, and you are mostly at the mercy of the river, you feel safe knowing that you are in the hands of skilled guides who have years of experience. You are also protected by the kayakers who follow alongside you to get you out of the water if you do go in — which, more likely than not, you will.

Taking the Plunge — the Washing Machine and the Terminator 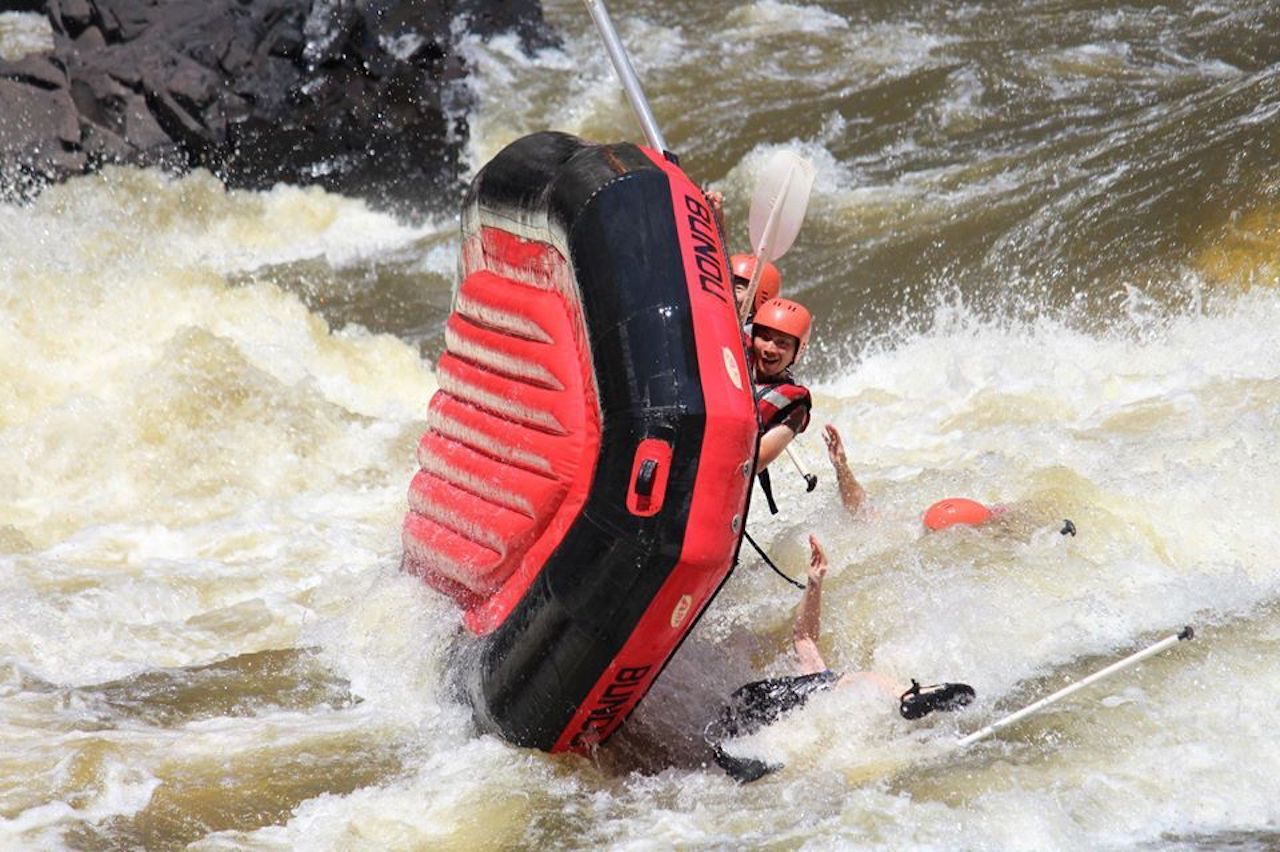 The rapids to look out for are the Washing Machine and the Terminator. With those names, there’s not much need for an explanation. These two notorious rapids come up near the end of the rafting trip. They were mentioned at the beginning of the trip, but nobody paid them much attention as we were more focused on the rapids being directly faced. There was no hiding from them when we saw them approaching. At this point, Doc told us all to stop trying to paddle and to get onto the floor of the raft. The guides were the only ones paddling and steering in each of the rafts. Not one person in our group stayed in the raft going through those two rapids, except for Doc. If you managed to hold on through the Washing Machine, you were going to get tipped out at the Terminator.

I fell out going through the Washing Machine. Trying to come up for air I hit my head on something; assuming someone had fallen on top of me, I moved to the side to try again but hit my head a second time. I very quickly realized I was caught under the raft and the rapids kept pushing us in the same direction. It felt like I was stuck under there for ages, and the thought that those moments could be my last was very real. All I could do was hit the underside of the raft.

The ordeal didn’t last too long, at least not as long as it felt, before a hand grabbed onto my life jacket to pull me out from underneath and back onto the raft. The guides and the kayakers move fast, and you are back in the raft within minutes, filled with relief. We were all a bit shaken, some people missing a shoe and others a bit bruised or bloody from hitting rocks, but ready to take on the last few rapids to get to the well-deserved beer. 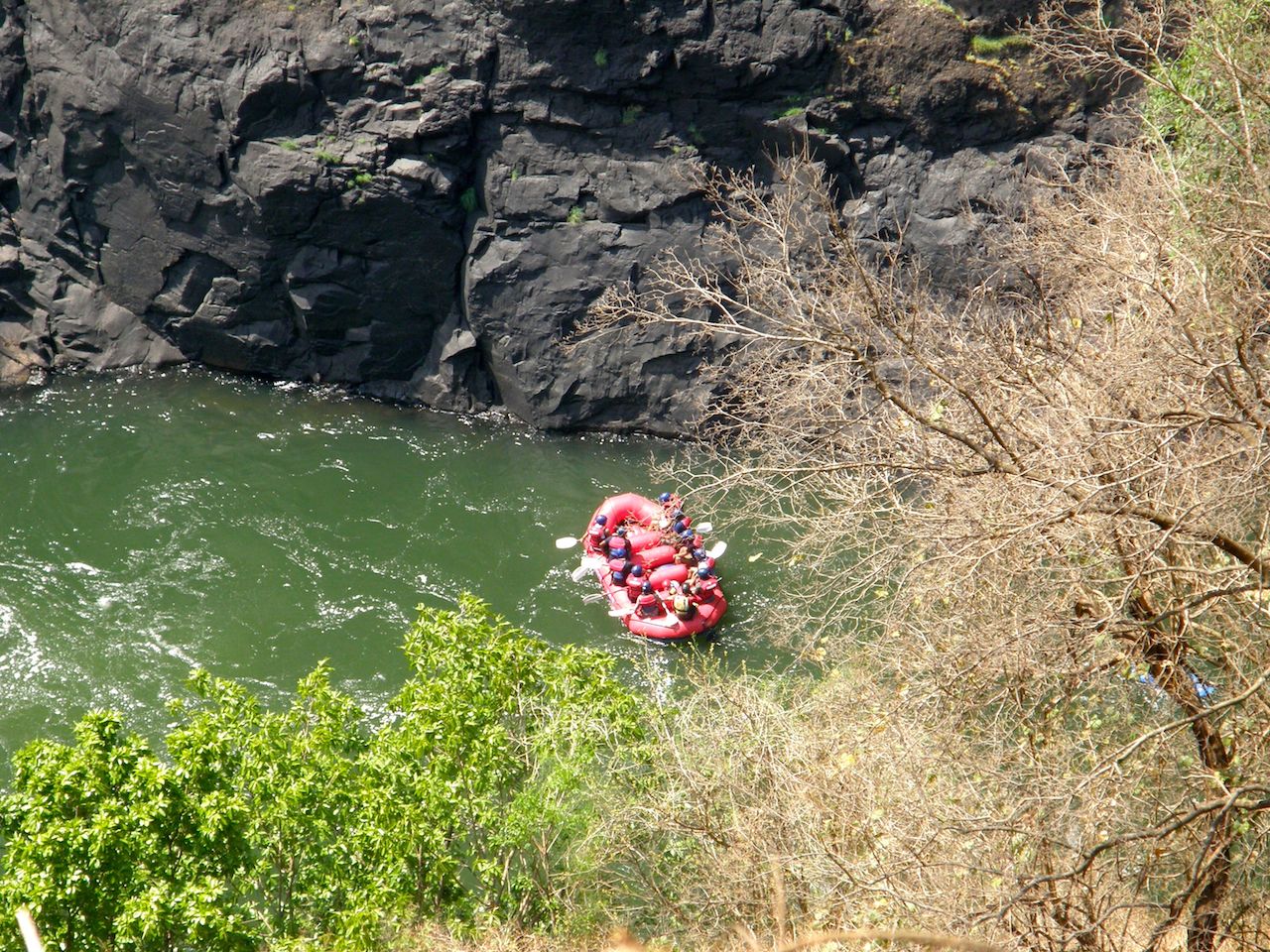 You’re not speeding down the river and facing the rapids for the whole trip. There are calmer moments on the water when you can take in your surroundings. You can also slow down your heart rate and take a little dip in the river while swimming alongside the boat if you’re sure there are no crocodiles skulking about.

It’s terrifying and invigorating at the same time. If you get the chance to go down the “adrenaline river,” you have to take it.

When to go and with whom 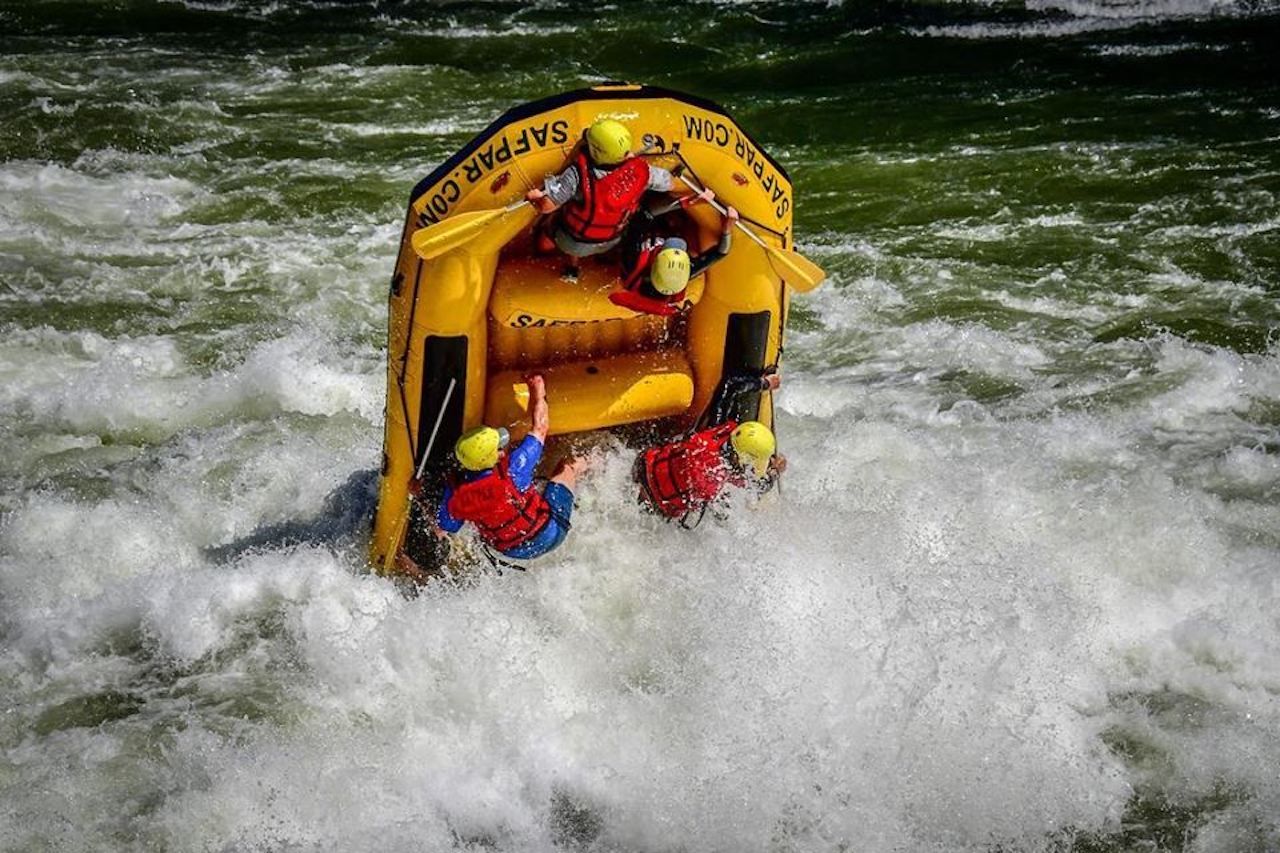 Bundu Adventures and Safari Par Excellence are both good companies to go with, with their prices being very similar. All the guides are fully qualified and have many years of experience; you can feel confident that you’re in good hands.

Canoe trips on the Zambezi 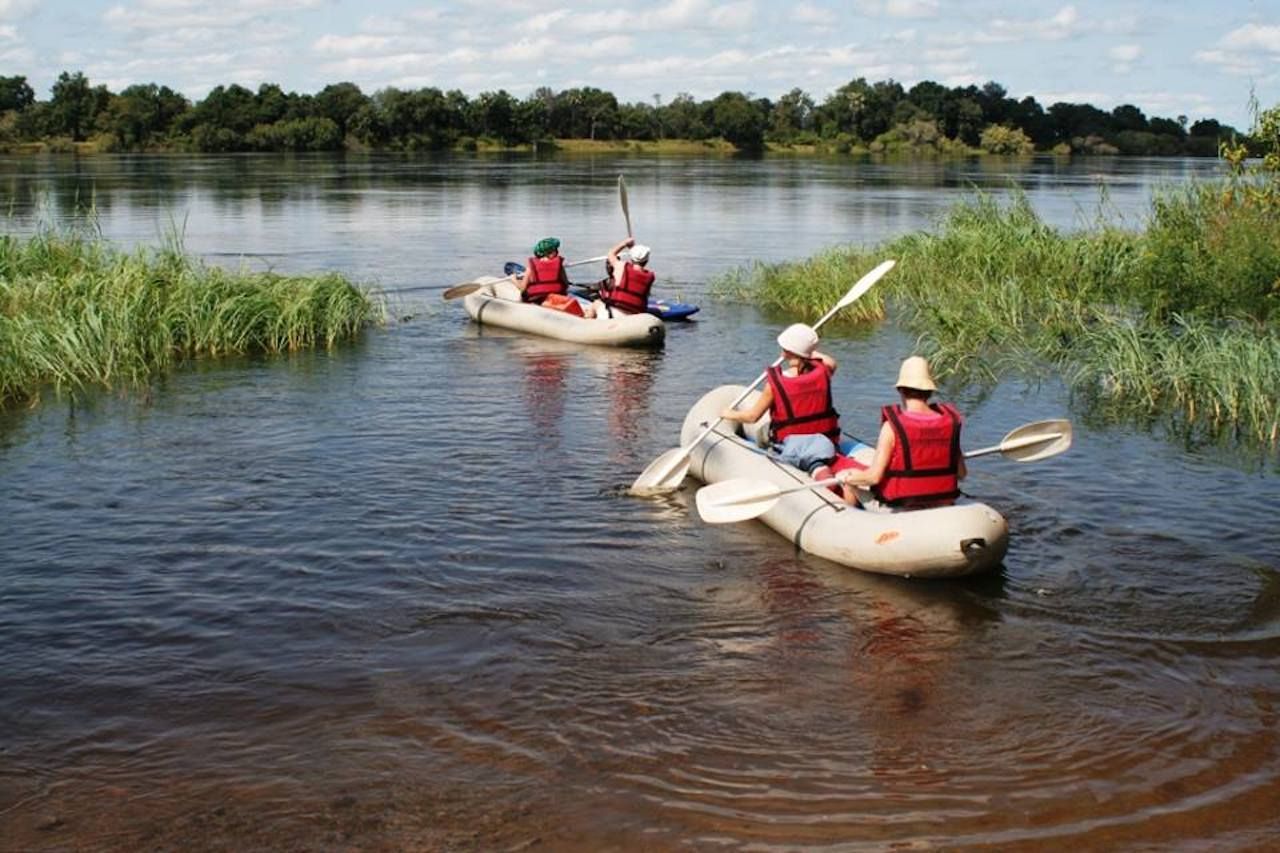 If the whitewater rafting doesn’t sound quite like something you would be interested in trying, but you would like to get out onto the Zambezi River, the same whitewater companies offer alternative ways to descend the river. Canoe trips, for example, are much more relaxed and allow you to focus on taking in the sights of the animals around you and on the natural wonder that Zambia and Zimbabwe are renowned for.

Look out for the river god known as Nyami Nyami, a giant dragon with the body of a serpent and the head of a fish. He is one of the most important gods of the Tonga people. That said, you’ll probably only come across him attached to a necklace being sold in town or around Victoria Falls.

RunningWant a Real Resolution? Go Ultrarunning in South Africa This Year
Tagged
Paddling Insider Guides Zambia
What did you think of this story?
Meh
Good
Awesome

The Art of Picking Up Trash