After decades of sanctions, Moldovan wine is finally starting to hit the world’s palates, and the small Eastern European country is transforming into an increasingly popular destination among wine connoisseurs. It’s only a matter of time before Moldova’s wines are at the tip of everyone’s tongues stateside, so stay ahead of the curve by heading straight to the source before the crowds do. Discover the story of this nation’s affiliation with — and affection for — wine and why intrepid grape-hunting travelers should start planning a trip now. 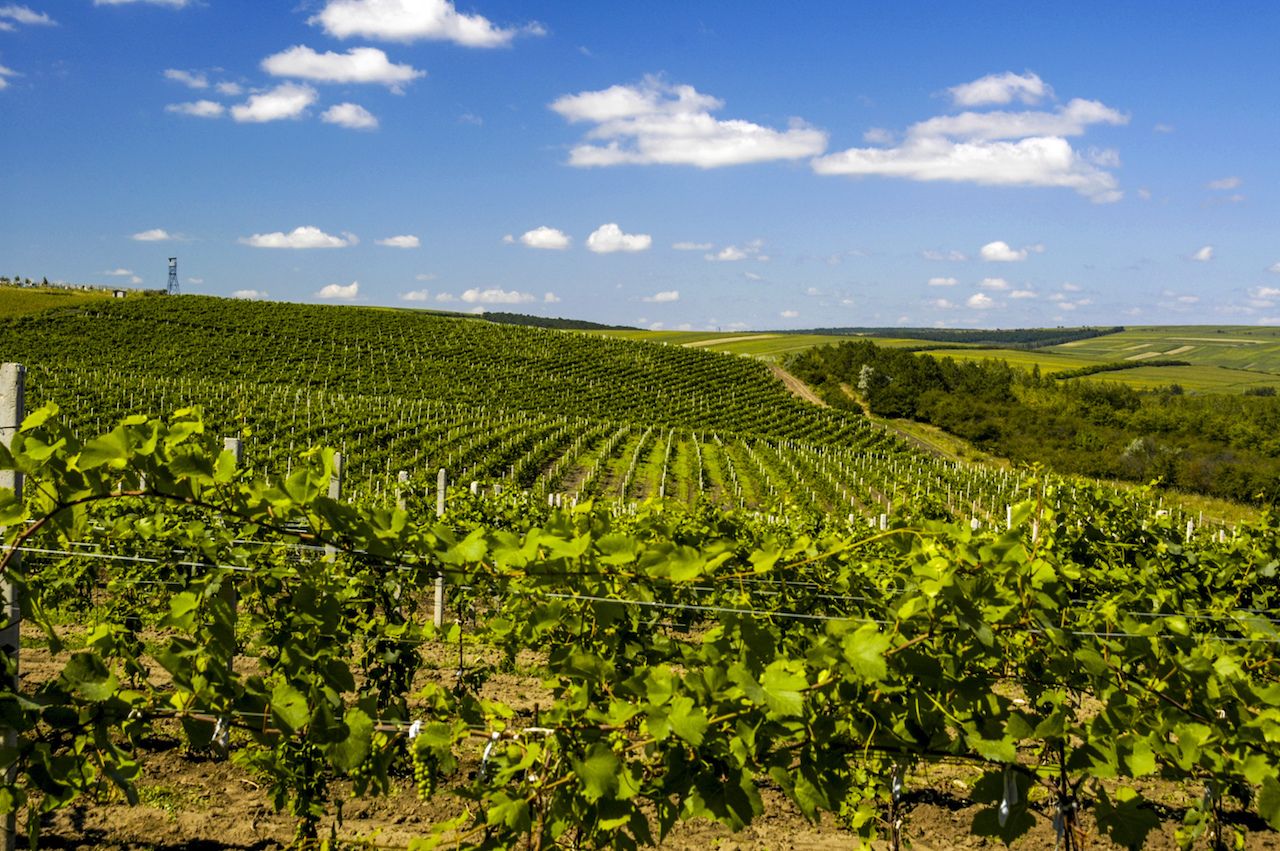 Moldova, sandwiched between Romania and Ukraine, holds the unenviable titles of both the poorest and third-least visited country in Europe. But the nation of 3.5 million has an open secret that captures more attention as each day passes: It’s an incredible destination for fermented beverages. In particular, wine and brandy. The wine industry produces over 125 million liters of the good stuff each year, which amounts to about one billion glasses of wine.

Moldova even looks like a bunch of grapes on the map, with some imagination. During its time as part of the USSR, one in two bottles of wine produced across the vast empire came from here. Today, it’s the world’s 20th largest wine producer. They take the stuff seriously here, so much so that Milestii Mici, near capital Chisinau, holds a Guinness World Record for the world’s largest wine cellar. It stretches more than 250 kilometers and houses over two million bottles. The country’s international airport was even recently dubbed the Wine of Moldova Airport. 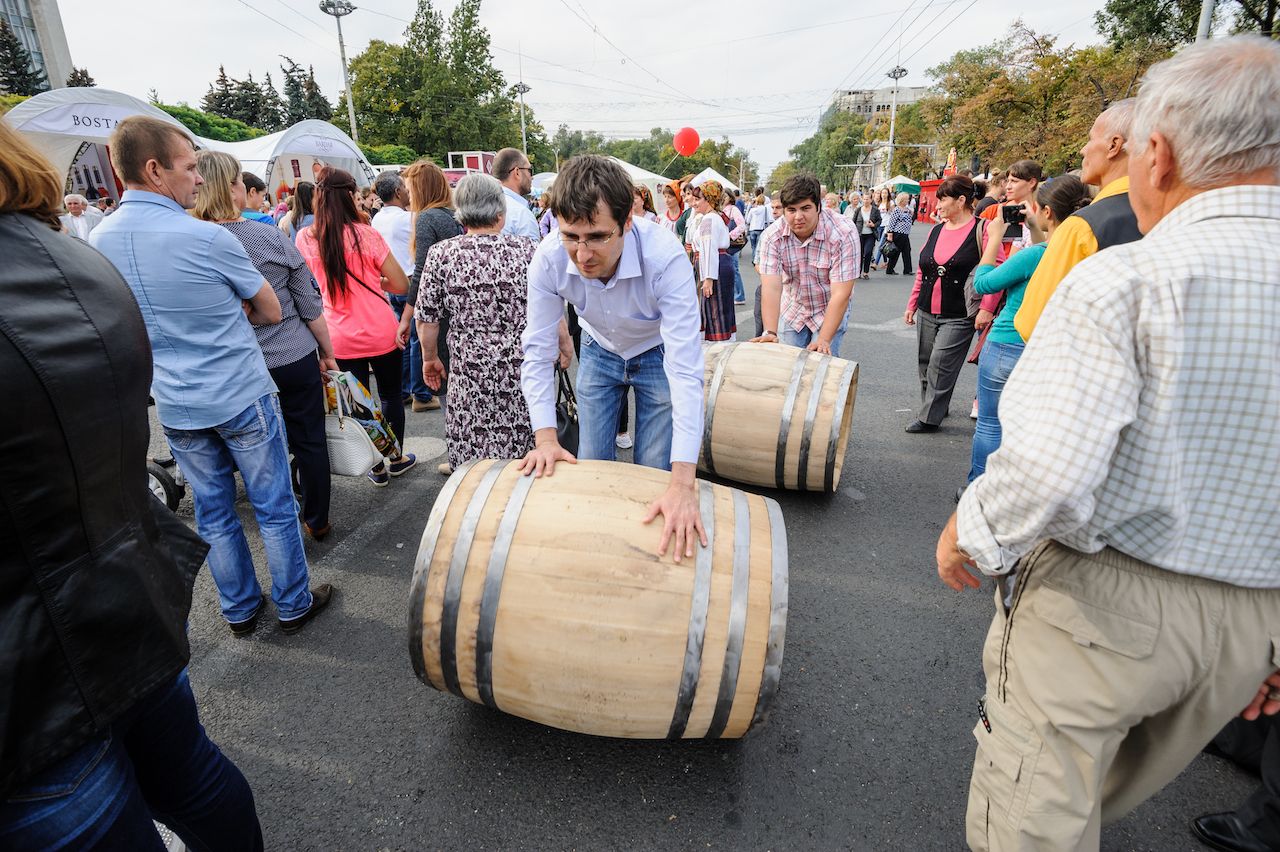 Almost a fifth of Moldova’s population has a role in wine production. Some grow grapes and make wine, others work in wine cellars and export. The industry’s growth across the country hasn’t happened without hardships, however. Moldovan wine almost vanished on multiple occasions in the last three decades alone, beginning with Mikhail Gorbachev’s anti-alcohol campaign in the 1980s. Then came the collapse of the Soviet Union, followed by recent sanctions in both 2006 and 2013 imposed by Russia, slashing imports from its biggest buyer.

Fortunately, closer ties with Europe inspired an explosion of sales in the West. The state-sponsored campaign is slowly putting Moldova on the map. Despite remaining relatively unknown, the country’s exports soared almost 20 percent between 2015 and 2017, and the investment in the industry promises a firmly established position in the future. In turn, this is driving tourism to Balti and other prominent regions across Moldova, so the country, in general, is definitely on the rise.

Moldova has produced wine since antiquity. 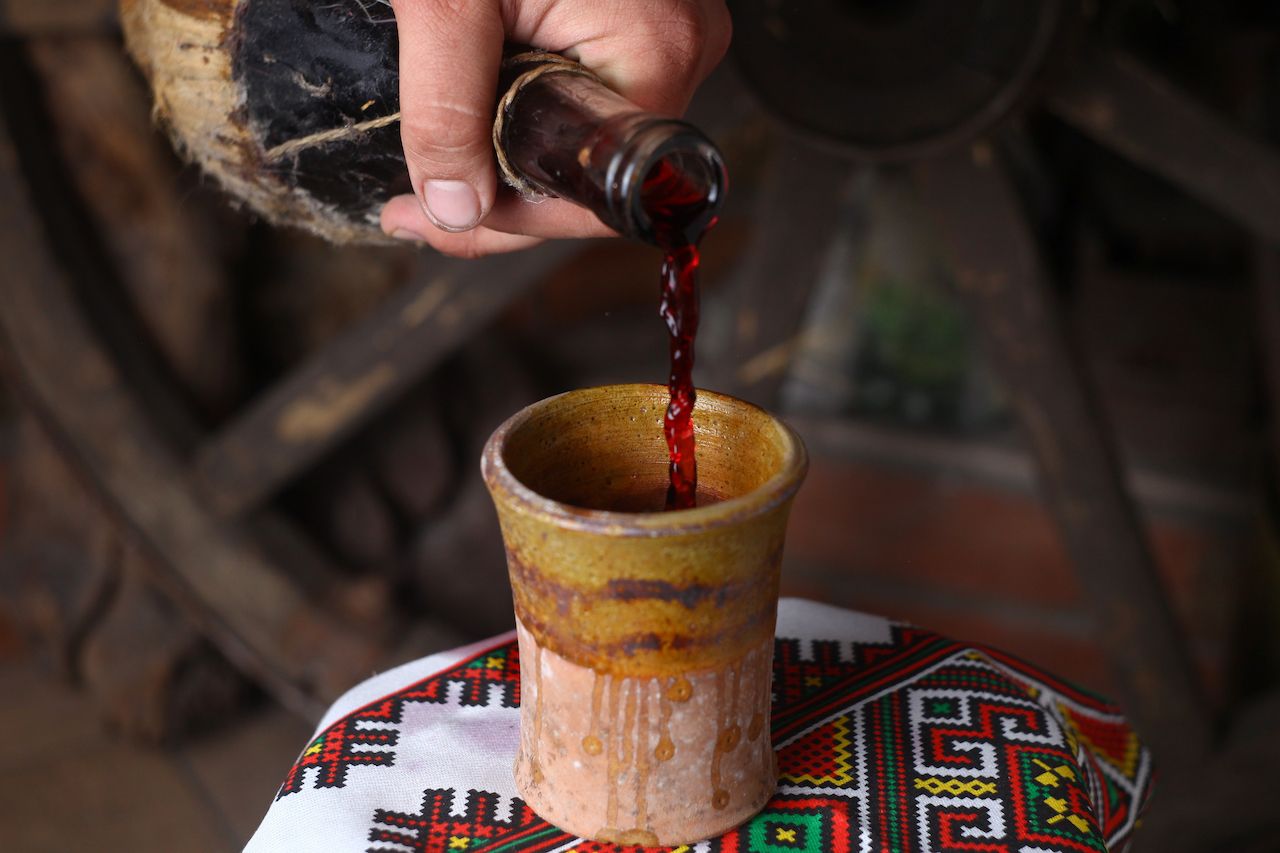 Winemaking in Moldova isn’t new. The country’s grape varieties, cultivation, and brewing techniques have been refined over thousands of years to perfect today’s flavors and brands. Moldova’s earliest grape vines grew 9,000 years ago, and archeologists believe early inhabitants of the region brewed wine at least 5,000 years ago. This is just 1,000 years after the world’s oldest known winery, Areni-1, which was found in an Armenian cave and thought to produce wine some 6,100 years ago.

Ancient Moldovans used their wine as a currency and to reward bravery. As Western Europe entered the Renaissance in the 15th century, so did Moldova’s wine industry. King Stefan the Great has two legacies: He defended against the invading Ottomans, and he revolutionized wine production. The king built cellars; imported and bred new grape varieties, many of which still grow today; and introduced better technology. Almost every city in Moldova now has a Stefan cel Mare Street as a testament to the country’s beloved king. When the Russian Empire and later the Soviet Union absorbed the tiny nation, tsars imported French grapes, including cabernet sauvignon. Soviets built underground cities to store the wine including those at Cricova, Milestii Mici, and Branesti.

The country grows some of Europe’s best grapes. 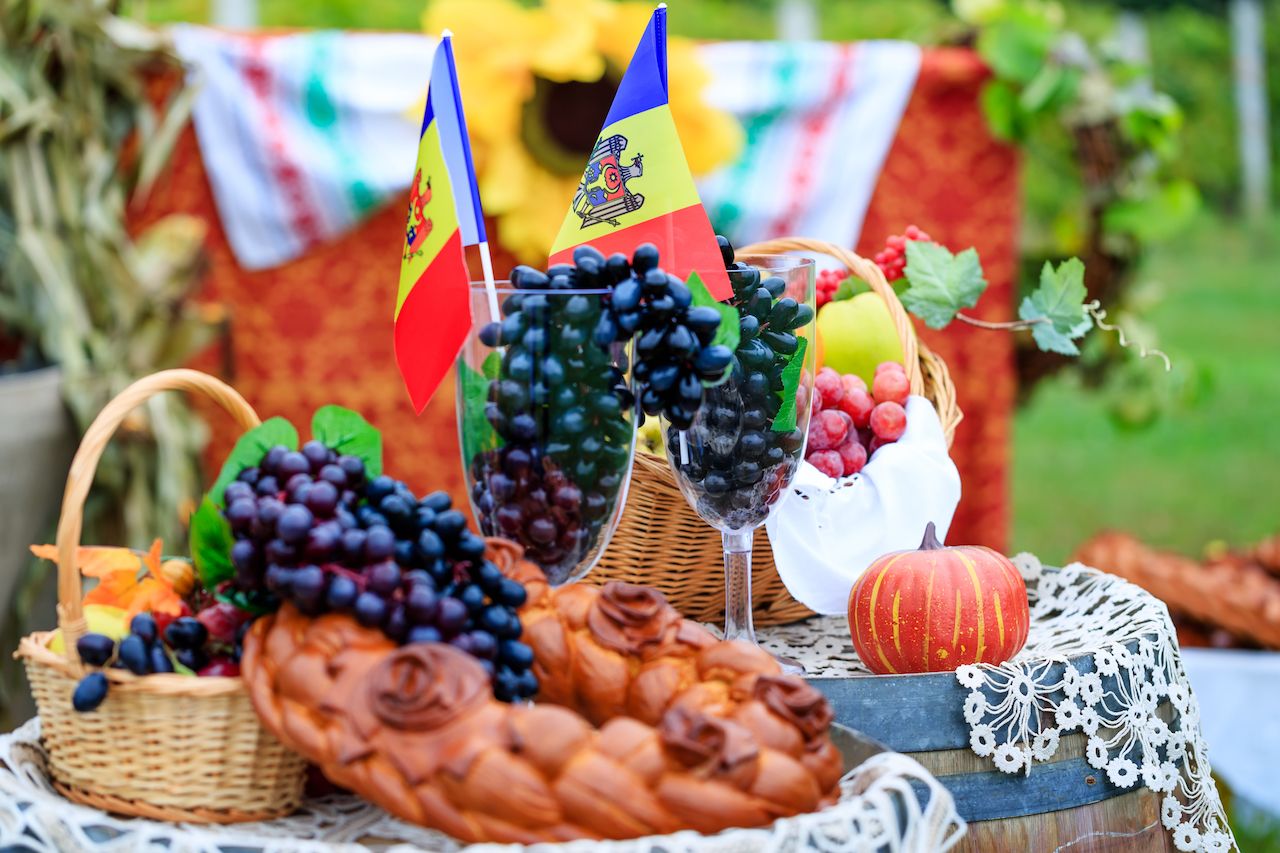 Shelves burst with Bordeaux wine in supermarkets and wine shops across the world. Moldova sits on almost the same latitude as Bordeaux, giving a similar climate. Moldova’s fertile soil rests on a limestone bedrock, which infuses nutrients and minerals creating grapes found nowhere else in the world. Moldova has four wine regions: Condru (central), Valul lui Traian and Stefan Voda (both southern), and northern Balti (pronounced ‘Belts’). Each region has slight variations in climate and soil, but throughout each, most of the grape varieties were imported over the course of multiple centuries. Approximately 10 percent of Moldova’s grapes are indigenous.

Each region is an affordable wine-touring destination. 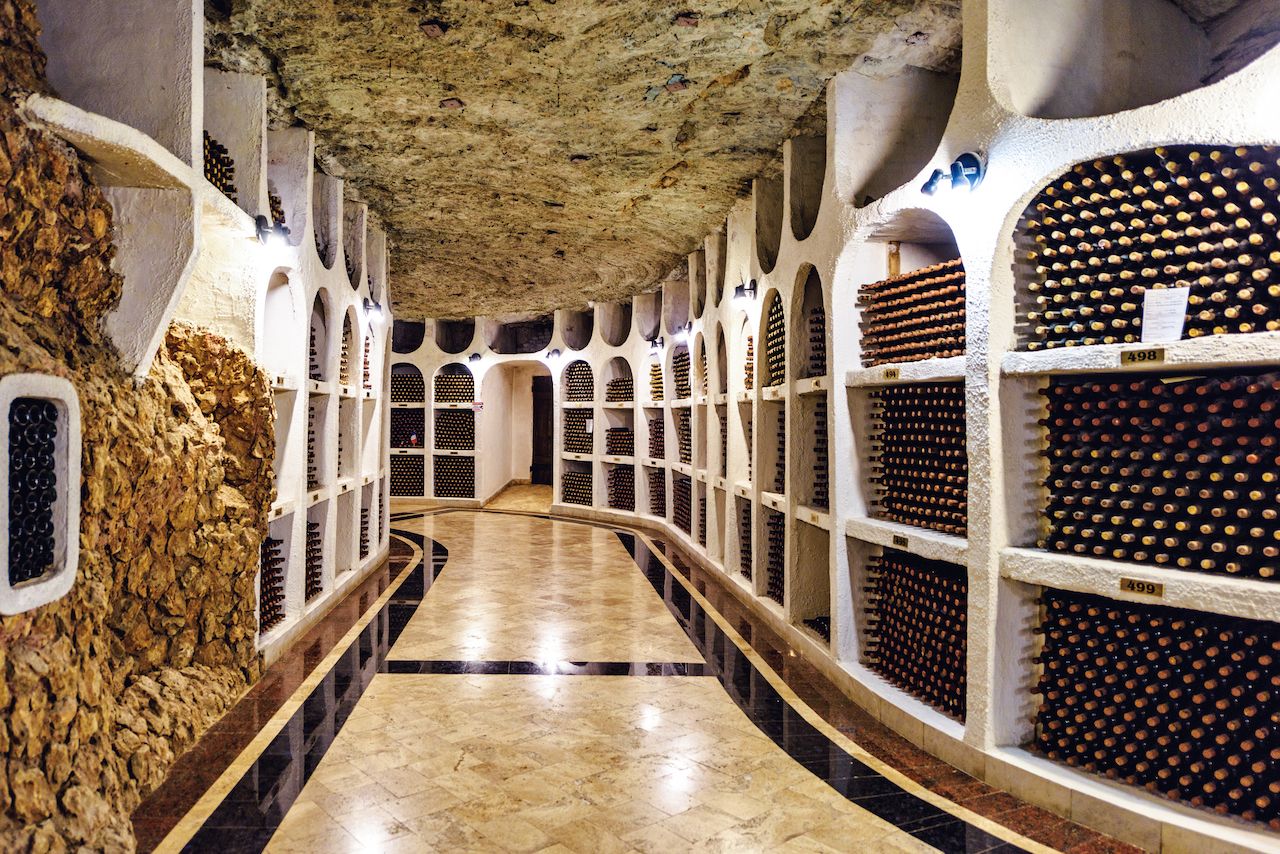 The first thing you’ll find in Moldova is how affordable wine touring is. You can have an affordable, luxurious, and classy adventure for a fraction of the cost of a similar experience in Italy or France. A glass of Italian wine in Tuscany costs about the same as three bottles in Moldova. Eat at a classy Chisinau or Balti restaurant, order a meal for two and a bottle of sparkling wine, and the bill often costs less than $20. Or sit in a street-side café and have a glass for less than the cost of a soda back home. Four-star accommodation hovers around $50 per night in both Chisinau and Balti, and winery tours start as low as $15. Those heading to northern Moldova will find travel even more affordable.

You can whet your palate with Moldova’s version of Cognac. 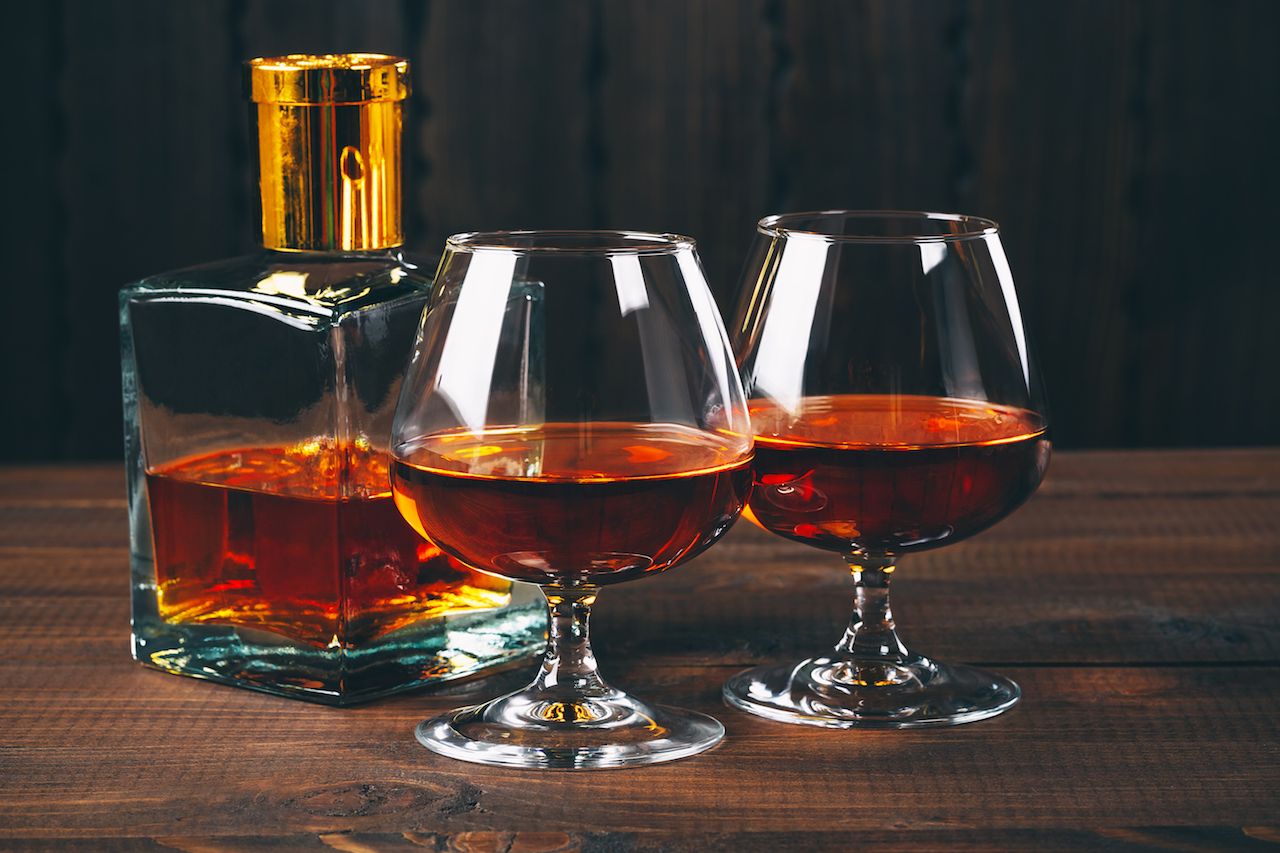 Moldovan brandy makes headlines for all the right reasons. The amber-colored, fruity beverage — popular and common throughout Moldova — was also as famous in the Soviet Union as its wine. Moldovan brandy is essentially Cognac, but the patented French drink prevents Moldova from using it. Instead, Moldovan Cognac is called divin. Locally sourced grapes produce VS, VSOP, and XO brands, which are available in supermarkets and restaurants throughout the country. Rather than a steep price tag, a bottle of XO (the highest quality) often costs less than $15. Moldova has two divin producers: KVINT in Tiraspol and Barza Alba in Balti. Both distilleries are open to guided tours and divin-sampling sessions.

There’s plenty to do besides imbibe. 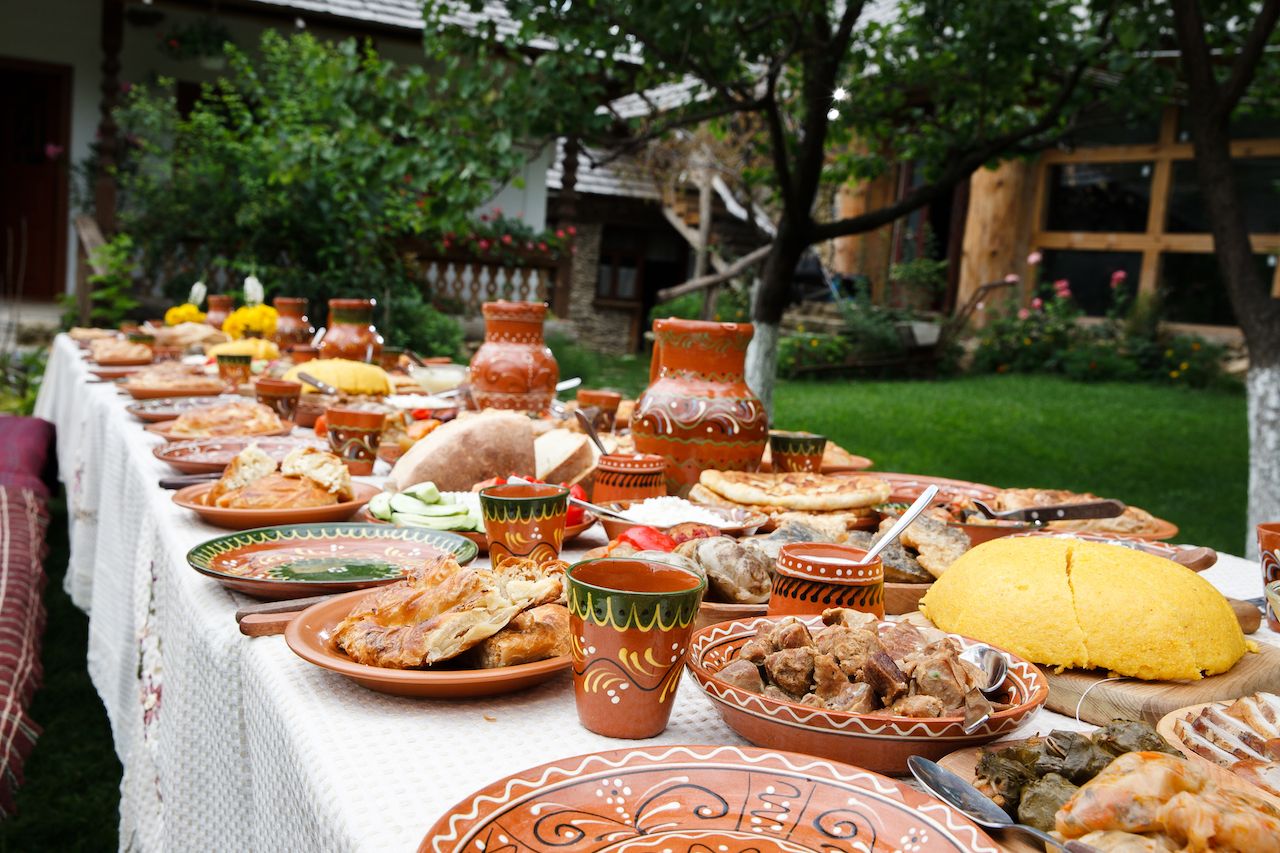 Moldova has much more than just wine for inquiring minds. Cities across the country resemble a Soviet time capsule, offering a history lesson and making for some great photos and walking tours. Almost forgotten monasteries doubling up as wine cellars fill the countryside. Breakaway state Transnistria and “capital” Tiraspol, a favorite day trip from Chisinau, resemble the Soviet Union as much now as they did 50 years ago. Soviet-style architecture lines Tiraspol’s clean streets with statues of Lenin.

Balti sees hardly any tourists despite its incredible wineries, providing the ultimate off-the-beaten-path adventure. Gold-domed Orthodox cathedrals sit near an almost forgotten synagogue, and the Balti National Theater hosts regular plays and operas with tickets costing just a few dollars. Tour companies can arrange a trip to the Royal Forest, Padurea Domneasca, a sprawling nature reserve 50 kilometers (31 miles) from Balti. Or you can day trip to Moldova’s “Gypsy Capital” in nearby Soroca, whose highlights include elegant Roma mansions and the stunning Soroca Fort with watchtowers that look as though they’re wearing pointed witch hats.

Tips for traveling to Moldova: 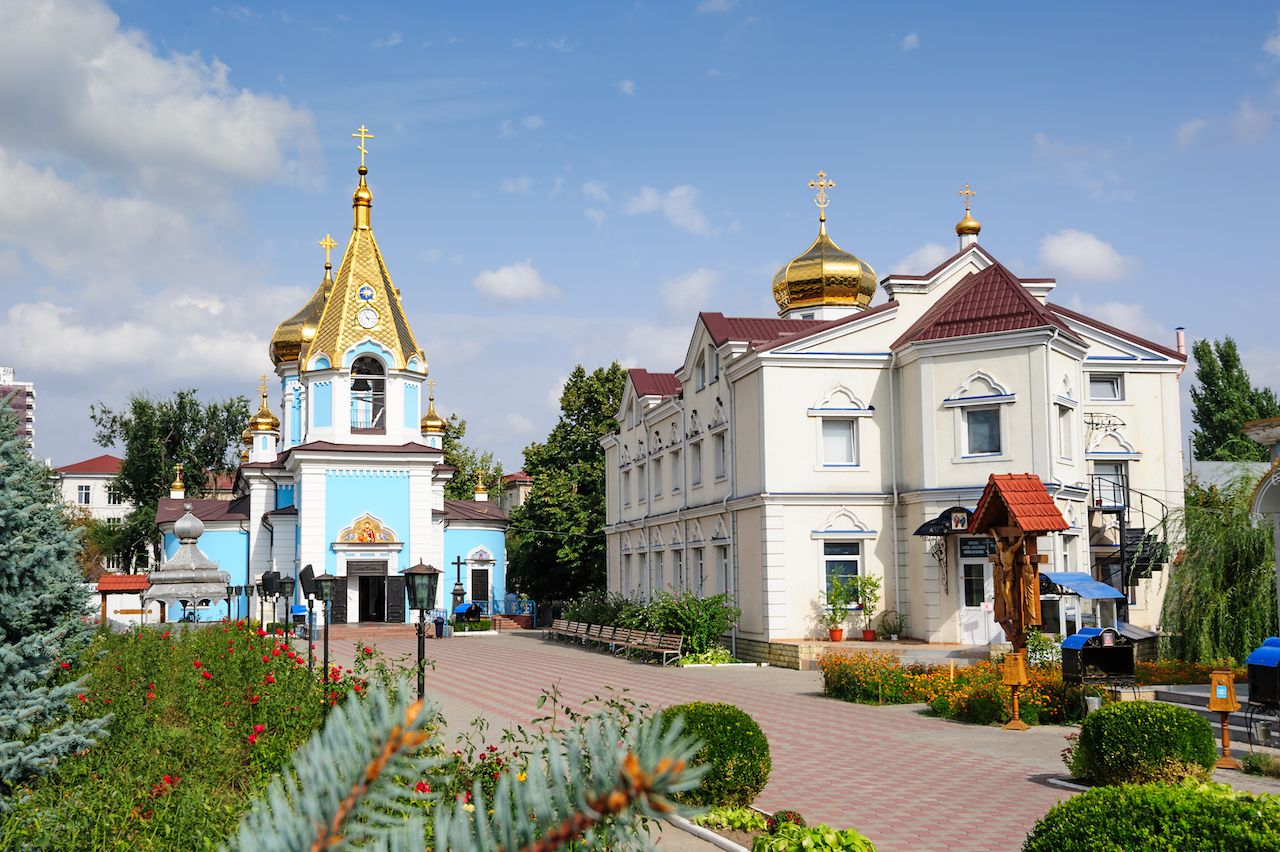 The fastest way to get to Moldovan wine country is to fly into the Wine of Moldova Airport (formerly Chisinau International Airport). Chisinau, the capital city, acts as a gateway to the rest of the country with hourly bus connections to both Balti and Tiraspol. All three cities have mid-range to luxury accommodation at affordable prices; however, options are more limited in Balti. Book in advance if you can. Direct flights connect Chisinau to a handful of Italian cities, along with Barcelona and London. Others link to dozens of European destinations. Travelers can also take a bus from Eastern Romania’s Iasi (pronounced ‘Yash’) to both Chisinau and Balti.

Getting around Moldova is both an adventure and a challenge. Local minibuses overloaded with passengers and luggage travel to almost every corner of the country — if you’re up for a cheap and crowded road trip. The journey from Chisinau to Balti takes approximately two hours and costs just a few dollars. Prepare for chaotic bus stations, cramped seats, and bumpy roads, but marvel at pastoral Moldova and the occasional vineyard from the window. Private transfers can provide a more comfortable way to get around.

Guided tours are the best option to explore the wineries and divin distilleries as deteriorating road conditions and poor driving standards can make it difficult to drive or cycle. The same climate that makes Moldova a wine-producing giant protects it against extreme weather. Summers are long and sunny with the mercury topping in the high 70s, and winters hover around the freezing point. Summers are better for a longer Moldovan adventure, but visit in fall for the grape harvest and National Wine Day during the first weekend in October.

Trip PlanningThis Underrated Canadian Wine Region Is the Next Napa Valley
Tagged
Trip Planning Wine Moldova
What did you think of this story?
Meh
Good
Awesome

7 Myths About Moldova That Need To Die

What Running in Moldova Means To Me