Increasingly, it seems that today’s most widely revered artists aren’t the traditional masters whose work is on display in galleries in New York and Paris, but street artists, who use walls and sidewalks as their canvas. They may not be household names, and indeed, may not even have names at all, but when you pass one of their pieces on your way to work, you’ll definitely stop and marvel at it, and probably take a few pictures.

Street art comes in many forms, but the most jaw-dropping pieces are typically those that play tricks on your eyes — that convert a mundane wall into a 3D masterpiece or a simple sidewalk into a world of many layers and perspectives. From a massive hole that makes you feel like you’re falling into the center of the Earth to artwork that blends in with the natural environment, these are a few of the coolest street art murals in the world. 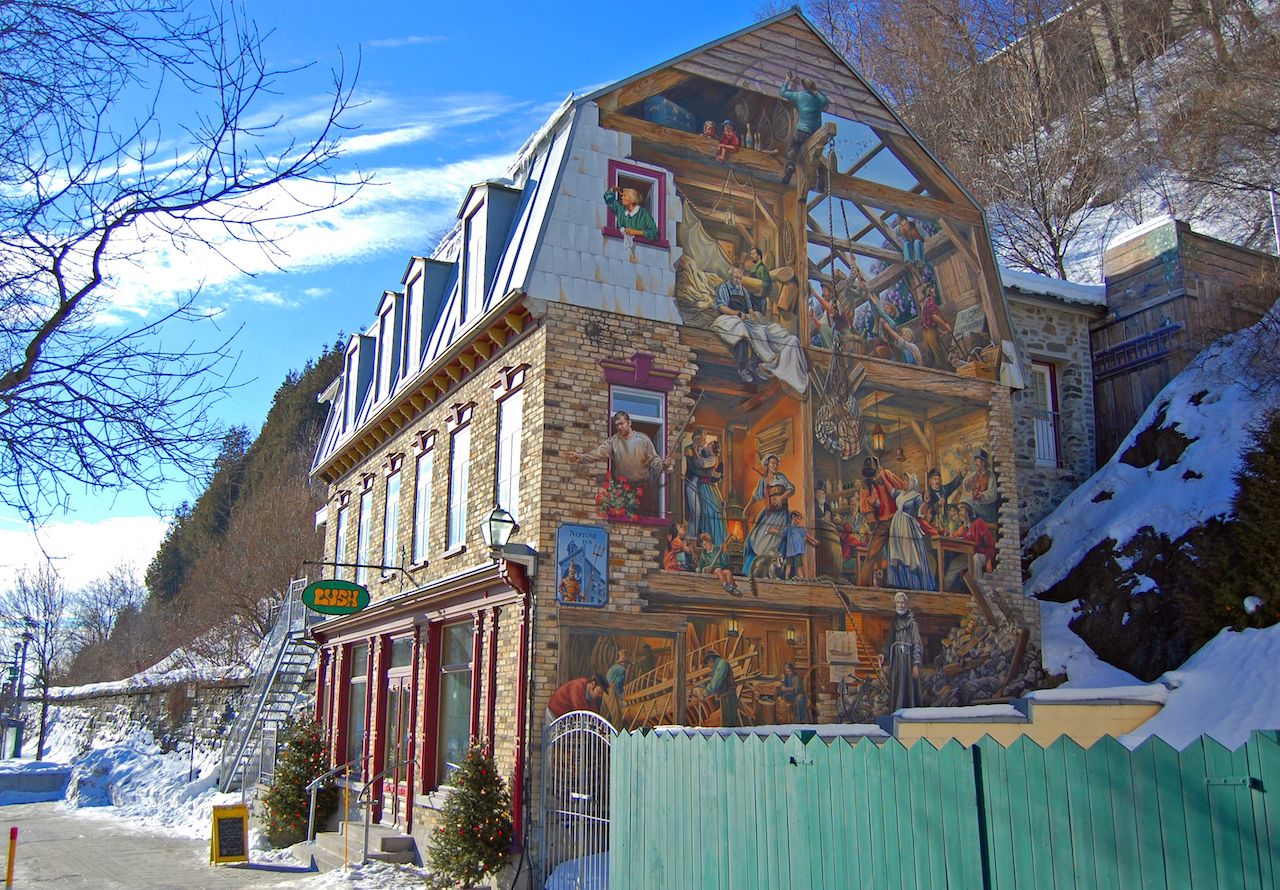 Next time you visit Quebec City, make sure you take a stroll around the Petit Champlain district — the oldest neighborhood in the city. At 102 Rue du Petit-Champlain, you will find a mural by an unknown artist, painted in the trompe-l’oeil style (an optical illusion meaning “deceptive to the eye”). You’ll feel like you’re looking into the interior of a ravaged old house, but you’re actually looking at a series of scenes depicting the history of the neighborhood. The mural shows the bombardments of 1759, landslides of 1889, and a fire in 1682. 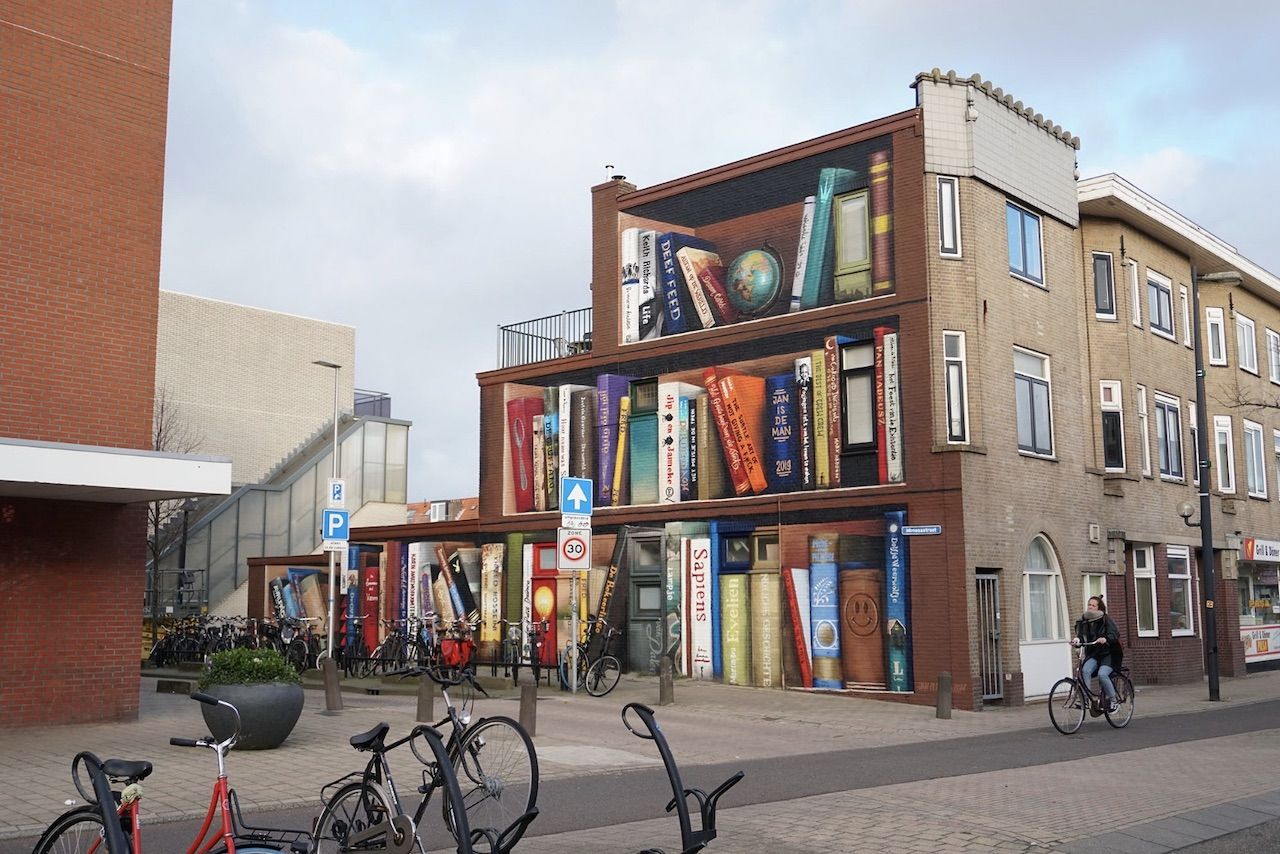 It might look like the side of a library or bookstore at first glance, but it’s actually just an ordinary building, with the world’s largest bookshelves as a facade. Street artist Jan Is De Man was commissioned by the building’s owners to create a mural, so he asked local residents to suggest their favorite book titles to be featured in the piece. As a result, the titles are truly representative of the community’s broad and diverse tastes. The artist told My Modern Met, “We’ve noticed that this project brought people together without pushing it. They met each other through books. Regardless of the differences in cultures, regardless of the differences in political point of views.”

This mural may be visually stunning, but it’s even more notable for its location. Inside Mexico City’s Chapultepec Park, there is a hydraulic complex called the Carcamo de Dolores where the river once fed the city’s water supply. The building was built by architect Ricardo Rivas as a tribute to water, celebrating the use of water throughout Mexican history. The little-known and infrequently visited mural can be seen inside a tunnel — once fully submerged in water — that leads to a tank in the center of the building. The tunnel itself and all sides of the storage tank are painted, telling the story of water’s role in society. Since originally the mural had to withstand a constant flow of water, the mix of paint had to be tested in laboratories to ensure it would hold up. The mural is just a half hour’s walk from the Auditorio metro station. 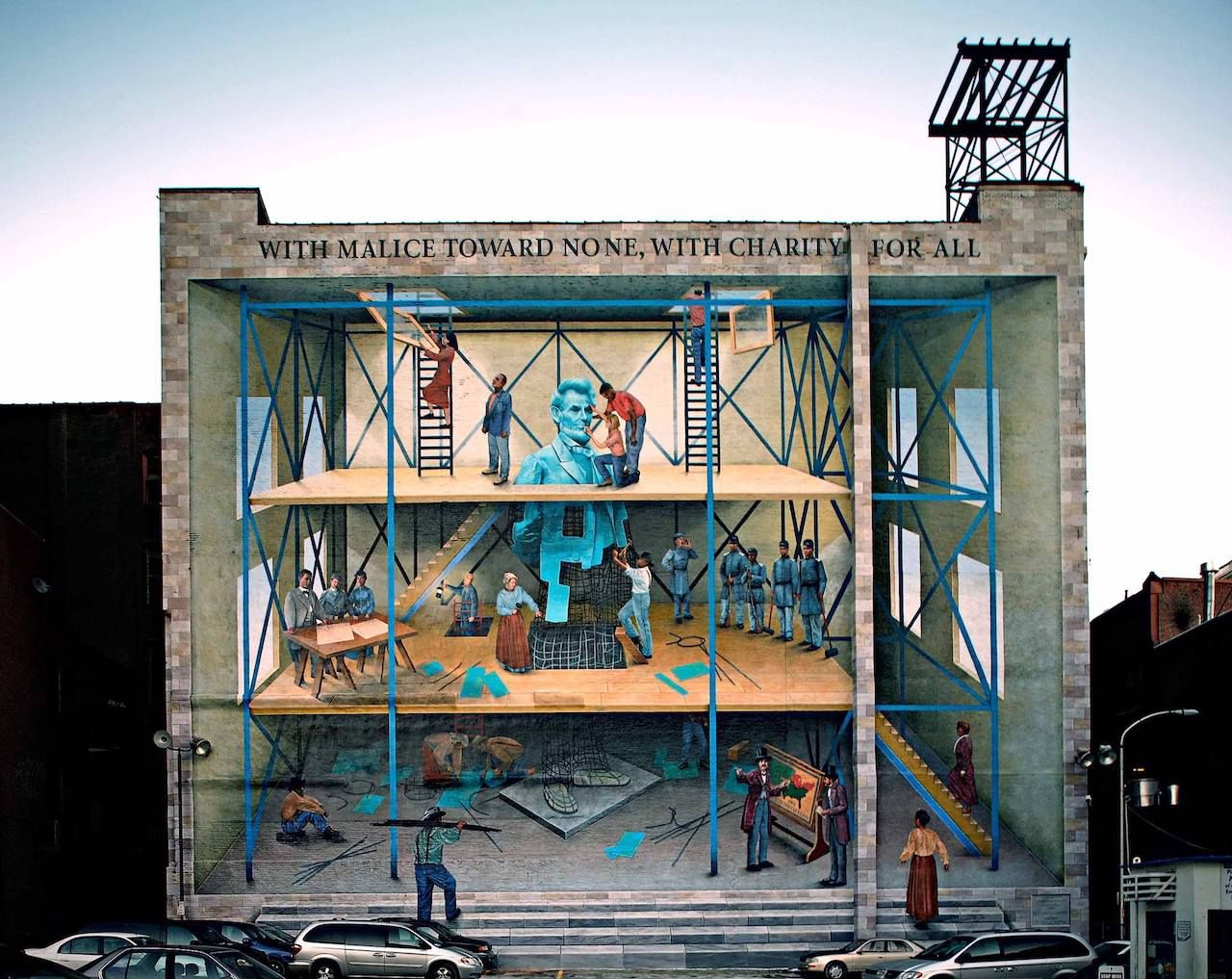 Street art lovers in Philadelphia certainly aren’t lacking works to admire. The “Mural Mile” is the term used to describe the city’s plethora of murals, consisting of over 3,600 designs across Philadelphia. Among the most well-known and impactful of these murals is “The People’s Progression Towards Equality,” which depicts the struggle for civil rights. Much like the mural on the Rue de Petit Champlain, this piece of street art creates the illusion that the viewer is looking through the side of a transparent building, glimpsing the rooms within. The scenes powerfully depict how African American culture was incorporated into the American lifestyle during the period of Reconstruction, and the role of Abraham Lincoln in the fight for equality.

Portuguese artist Odeith takes optical illusions to the next level. In Chase Your Dreams, painted on an unnamed wall, he uses anamorphic techniques (vantage point manipulation) to create a 3D illusion. He is particularly well-known for his spray-paintings of massive insects, which appear to be leaping off the walls and terrorizing the viewer. Chase Your Dreams is somewhat more innocuous but has become one of his most popular and well-recognized works. Notice the shadow on the ground, which makes it appear like the airplane is popping out of the wall. You can check out some of his other eye-popping works, including his popular 3D insects, on his website. 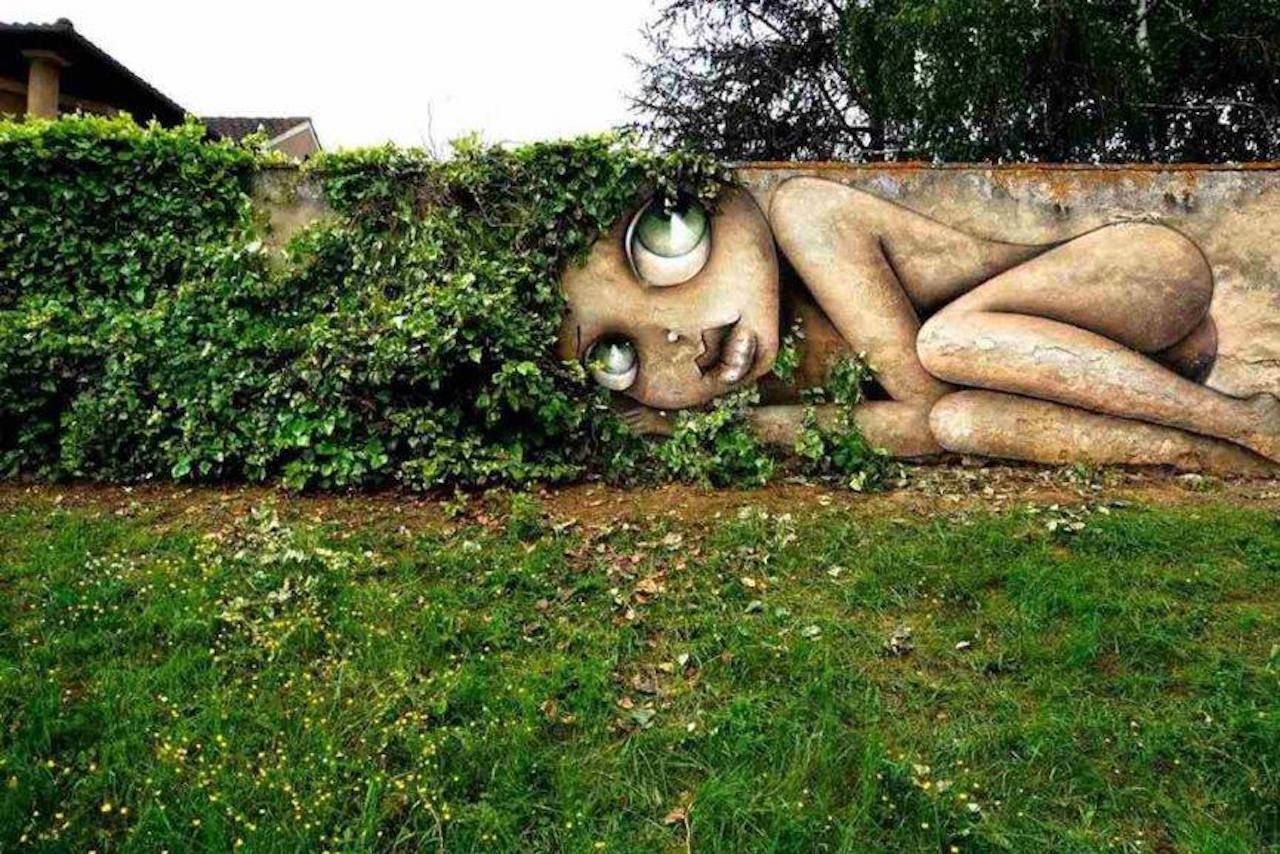 Street artist Vinie is known for incorporating elements of the natural world into her art, and this Reclining Lady piece is no exception. Created for the Magnac Eauze street art festival in Eauze in the south of France, the mural shows a voluptuous female figure reclining in the grass. In keeping with Vinie’s classic style, the greenery growing along the wall blends seamlessly with the figure’s head of hair, becoming part of the work itself. 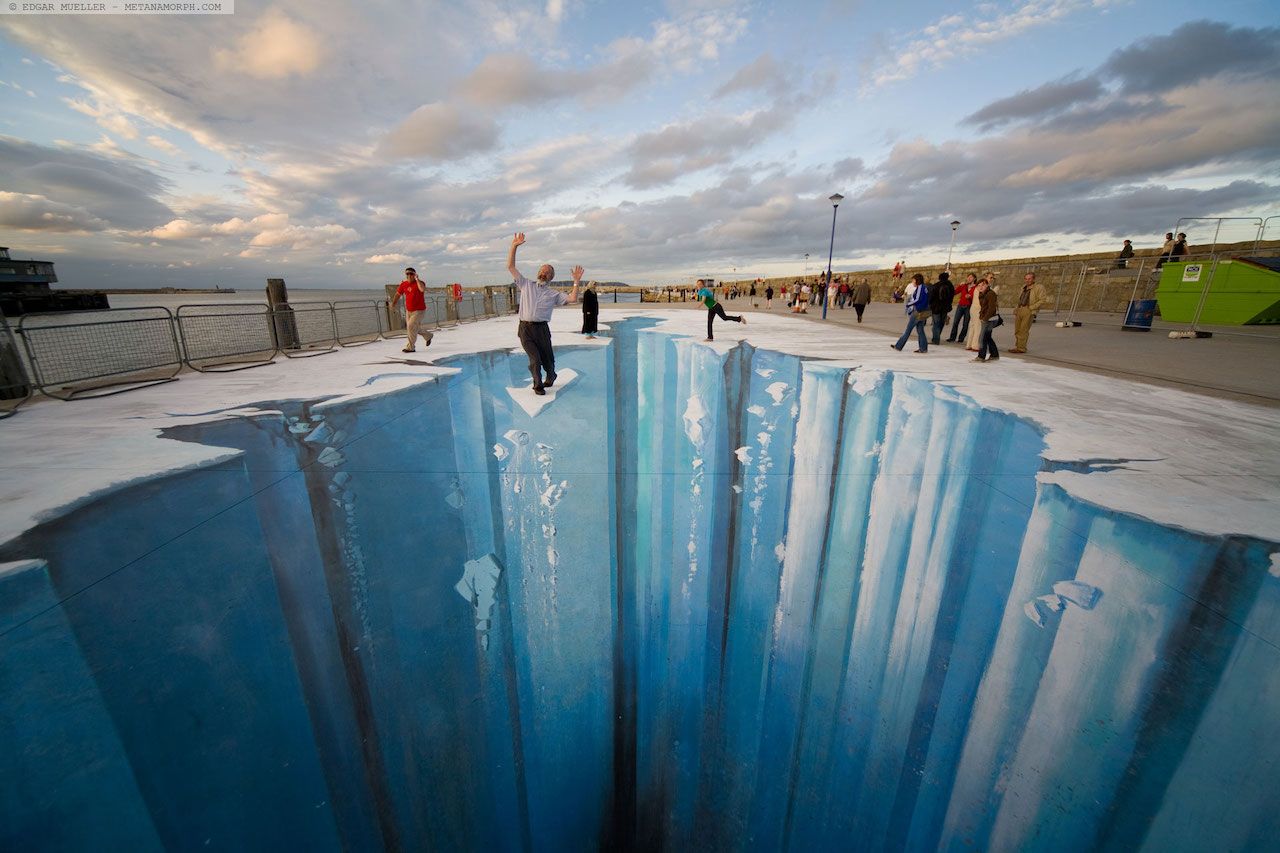 This work was created back in 2008 during the “Festival of World Culture” in Dun Laoghaire and is perhaps the best example of linear perspective in the world of street art. If you’re afraid of heights, this piece might make you break into a cold sweat just standing at its edge. Edgar Muller’s manipulation of vertical lines creates a convincing illusion that the viewer is about to step off a precipitous ledge and tumble down into a dark abyss.

These are the prettiest public toilets in the world