Every winter, around the second week of February, the setting sun backlights Yosemite’s Horsetail Fall at just the right angle to appear as though lava, rather than water, cascades down the 176-foot rockface. This phenomenon is known as the “firefall.” Lasting roughly two weeks, the miracle of nature coaxes thousands of visitors out of hibernation and into the park each year, drawing as many as 2,000 spectators on a single day in 2019.

Peak season in Yosemite otherwise falls in summer, with the masses descending on the park between Memorial and Labor Day. With the exception of the firefall crowd, a relative lack of visitors is among the most convincing reasons to plan a winter trip. Seeing the landscapes that earn the park its renown all snowy is another — of which Horsetail Fall is just one.

From ethereal cold-weather phenomena to the best of the winter wildlife, the following sights prove there’s no place like Yosemite between December and February, far away from the firefall mob and everyone else unwilling to brave the cold. 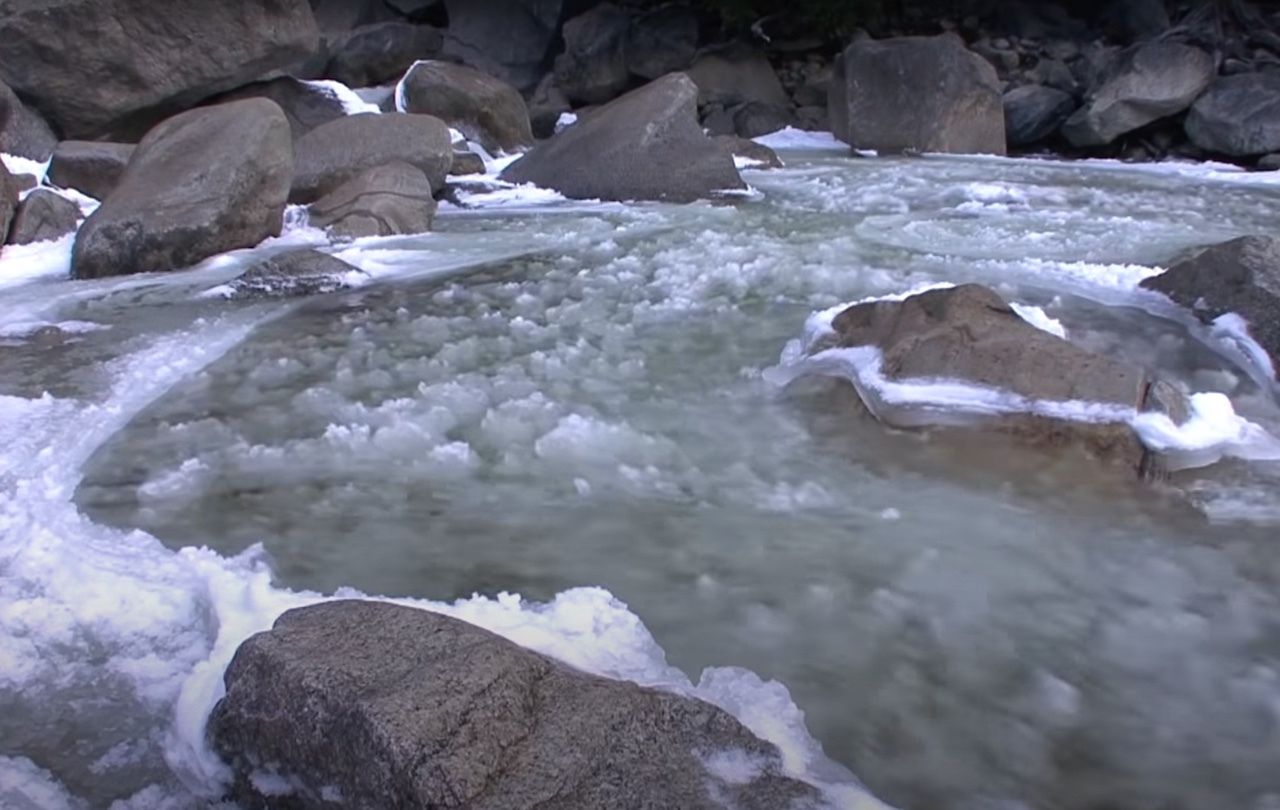 When ice crystals form on below-freezing yet still-flowing water, such as when mist from Yosemite Falls crystalizes and floats down Yosemite Creek and into the Merced River, the result is known as frazil ice, and it’s one of the most magical phenomena a person can witness in the park. It’s also one of the most ephemeral, according to Tony McDaniel, the communications manager for the Yosemite Mariposa County Tourism Bureau.

Frazil ice can occur any time of year, depending on the temperature and conditions. While it’s never a guarantee, late winter through spring provides the best chance of seeing this icy, lava-like slurry flow through the valley. Early morning visits, before 9:00 AM, also increase your odds of experiencing frazil ice — since the phenomenon depends on overnight lows.

If you’re in the park during the colder months, start your days in Lower Yosemite Fall above Yosemite Creek for the highest likelihood of a slushy show. Frazil ice has also been observed from Bridalveil and Ribbon Falls, Sentinel and Salmon Creek, Royal Arches Cascade, and elsewhere in Yosemite Valley. Even if you wake up early and there’s no frazil ice in sight, expect to enjoy some of the quietest, stillest, and most spectacular winter views, practically to yourself. 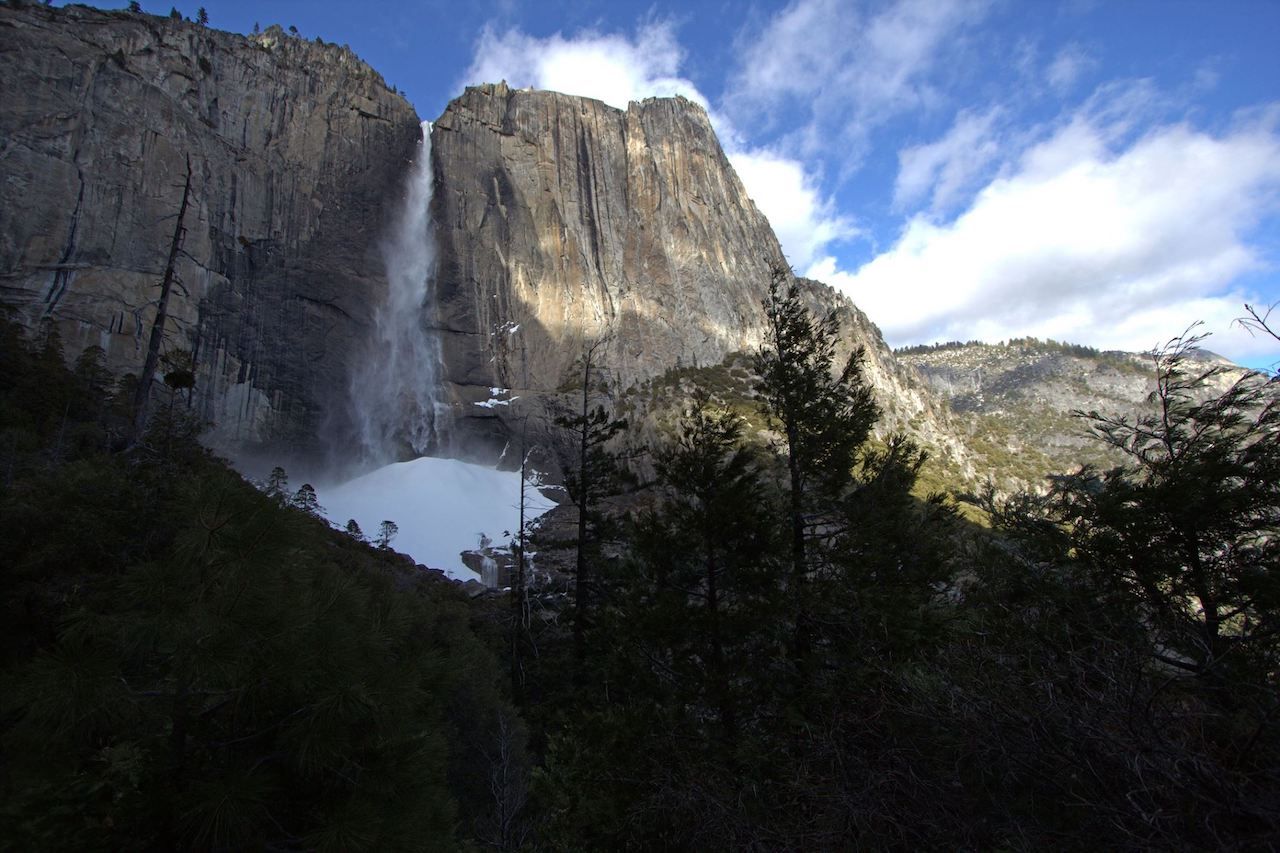 Landmarks like Half Dome and El Capitan look undeniably good in winter white. That said, no place in the park is as striking post-snowfall as Upper Yosemite Falls thanks to the giant snow pile that collects at its base. This phenomenon is known as the snow cone, so named because it looks like a frozen treat flipped upside down, and it can get to be hundreds of feet tall.

Unlike frazil ice, McDaniel assures, the Yosemite Falls snow cone is likely to be visible on any given winter visit. This mammoth mound of frozen mist, fallen ice, and fresh snow is easy to see from Upper Yosemite Falls, though you may be able to catch a glimpse from lower Yosemite Falls. (Either way, avoid the middle cascades as a viewing base.)

On occasion, visitors will even hear thick sheets of ice scrape off the granite walls of Yosemite Falls as the sun begins to warm its icy coat, sending a thundering crash through the valley as ice plummets thousands of feet to the base of the falls. Have no fear if you do; that only means the snow cone below will be that much more epic. 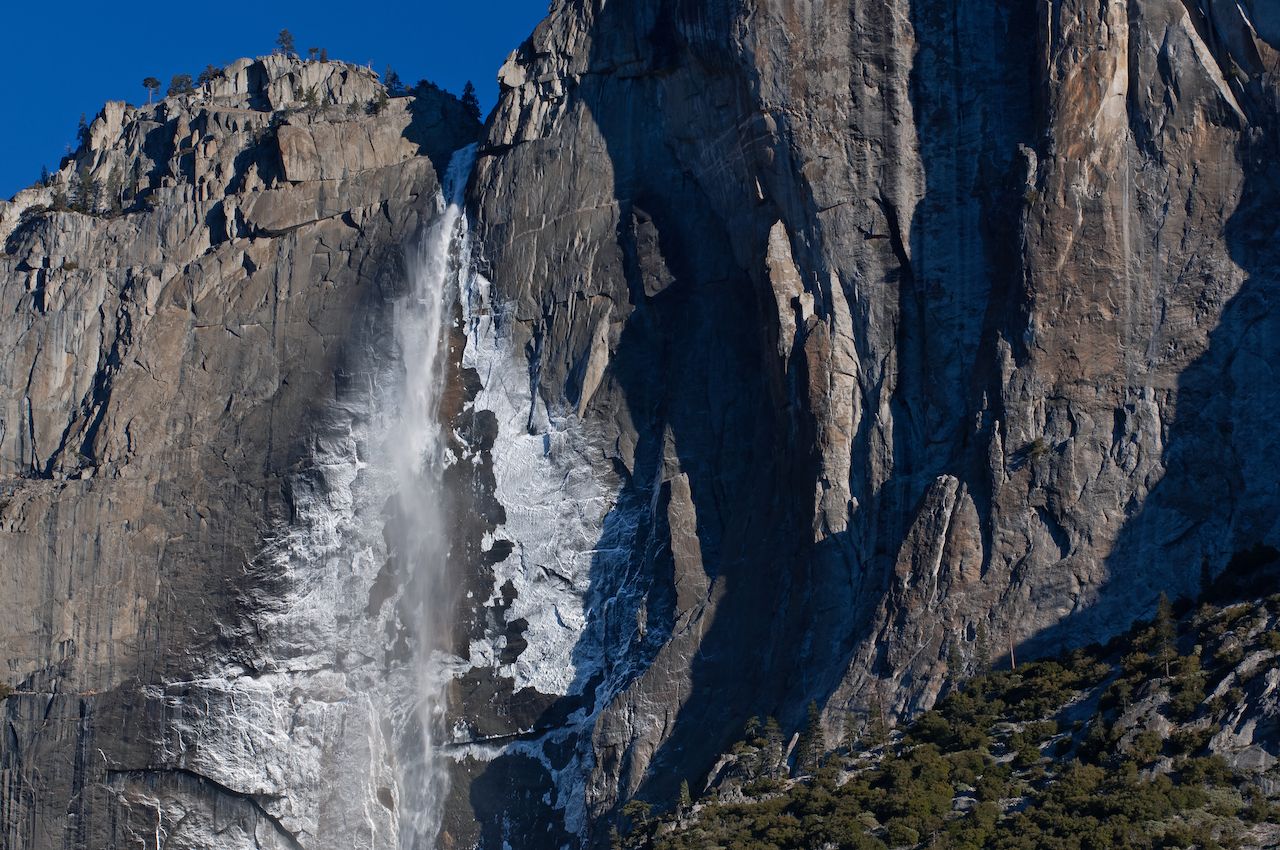 Both the snow cone and frazil ice depend on Yosemite’s falls freezing to some degree, but sometimes, entire waterfalls ice over in winter. Silver Strand, one of the park’s most overlooked falls, often makes that list, a fact that intrepid climbers have caught onto.

To see Silver Strand Falls in all its frozen glory, position yourself at the lightly trafficked Tunnel View overlook. This also happens to be one of McDaniel’s most highly recommended winter viewpoints, no matter the state of the falls. From Tunnel View, he notes, you can see all the way down Yosemite Valley, admiring the snow-covered upper elevations and what’s left of the greenery down below, all in one epic panorama. 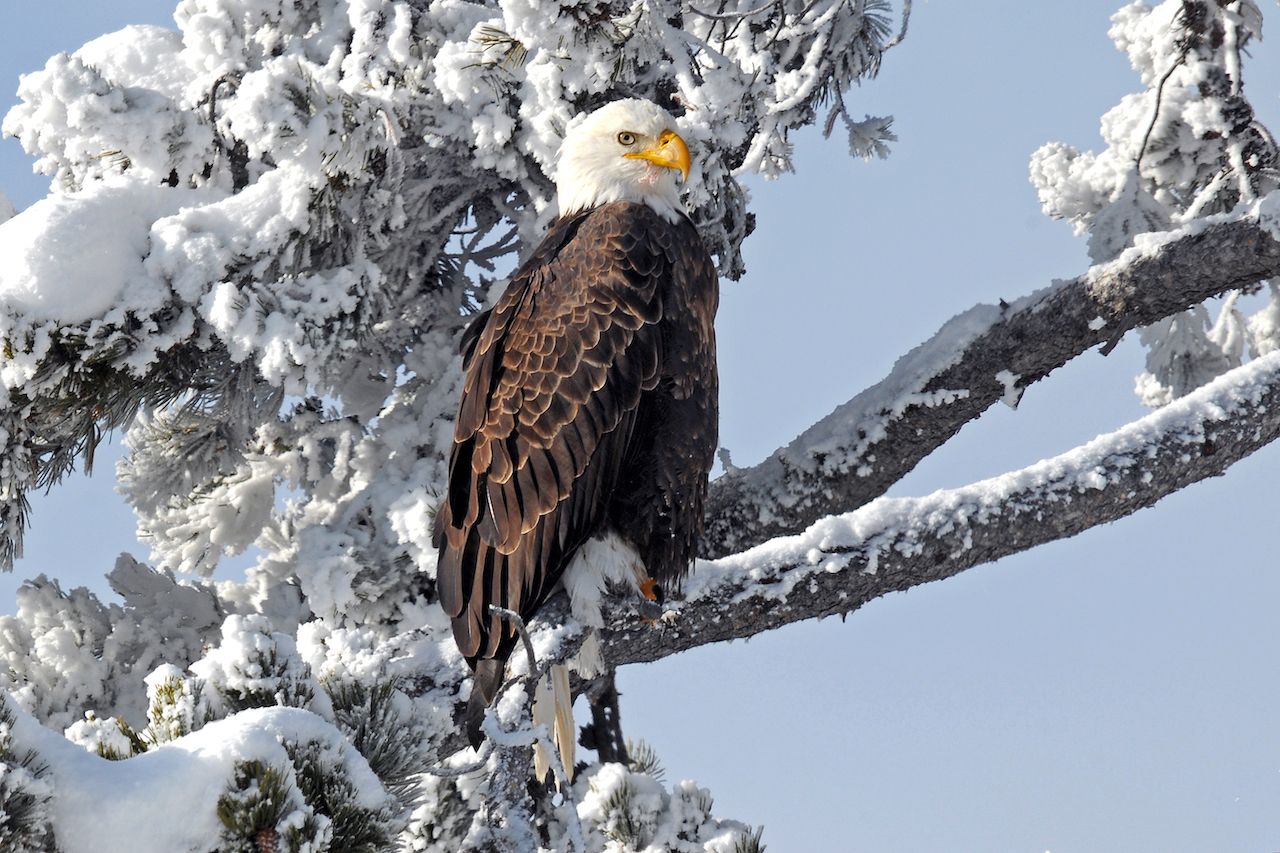 Winter in Yosemite is wildlife-spotting season. As visitor numbers dwindle, the native fauna is emboldened to take back its territory, meaning more frequent and intimate sightings for those who do visit. Of particular note, says McDaniel, are bald eagles.

Both bald and golden eagles call Yosemite home. Bald eagles are rare, but winter is your best bet for seeing them roost as they tend to leave the park in the warmer months to spend them in colder climates. Stick to lower elevations near bodies of water in Yosemite Valley, such as around the Merced River, if you’re eager to see eagles. Sightings have also been noted around Hetch Hetchy, Bower Cave in Mariposa County, and Blackhawk Lake in Madera County.

Throughout the park, keep an eye out for bird species like Stellar jays, Western bluebirds, woodpeckers, chickadees, and red-shouldered hawks. Other year-round wildlife that’s likely to be more brazen in the face of thinner crowds includes mule deer, coyotes, mountain lions, and red foxes. Also worth noting is that the park’s bighorn sheep, which stick to the tallest peaks during summer, tend to come down to lower elevations during winter to avoid the harsh weather. 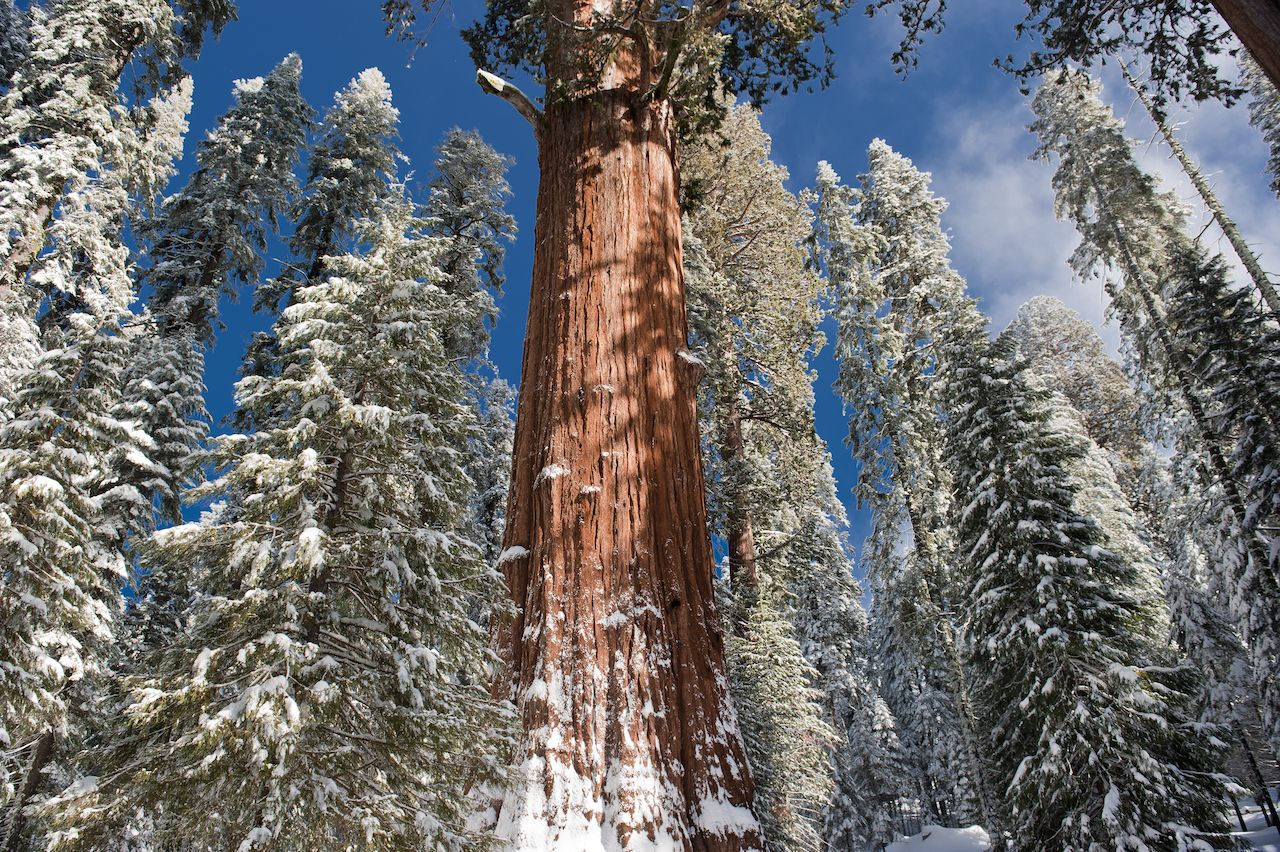 Yosemite plays host to three giant sequoia groves: Mariposa, Tuolumne, and Merced. The natural skyscrapers that have been growing here for as many as 3,000 years, reaching heights up to 200 feet, are always astonishing, but there’s something special about seeing their reddish hues accentuated by bright white snow. While this is not so much a natural phenomenon as it is an annual occurrence, it is pretty phenomenal, says McDaniel, who notes that these groves also make for some of the best snowshoeing in Yosemite. (Note that Mariposa Grove is currently closed while Tuolumne and Merced are open to the public.)

Where the best winter walks are concerned, McDaniel has one more suggestion: the 12-mile Valley Loop Trail, which looks out on El Capitan, Bridalveil Fall, Sentinel Rock, Three Brothers, and Yosemite Falls, among other park favorites. Budget roughly six hours or longer to complete the loop as the terrain can be tricky — and slippery — during winter.

National ParksMariposa Is the Best Place To Base Your Yosemite Trip, Even if It’s Out of the Way
Tagged
National Parks California, United States
What did you think of this story?
Meh
Good
Awesome