Before 1992, the countries of Bosnia and Herzegovina, Serbia, Croatia, Slovenia, North Macedonia, Montenegro, and Kosovo were united under one republic called Yugoslavia. Between 1991 and 2001, this region suffered a series of violent secessionist conflicts known as the Yugoslav Wars. In the early ‘90s, the Yugoslav People’s Army (JNA) worked to combat the secessionist governments, believing that unity was best for the country. However, Belgrade was the capital of Yugoslavia, and the JNA soon became an instrument for the whims of the Serbian government. Slobodan Milošević, then President of Serbia, used the Yugoslav military in an attempt to create a “Greater Serbia,” and he was ruthless in the pursuit of this goal. As Slovenia, Croatia, Bosnia, and Kosovo all attempted to declare their independence, Milošević sent JNA forces to combat the insurgencies and keep the Balkan region under Serbian control.

The Yugoslav Wars were incredibly violent, and certain parts of the Balkan region are still recovering two decades later. In fact, this is widely looked upon as Europe’s deadliest conflict since World War II, with an estimated 140,000 casualties. If you are ever in the region, consider visiting these sites to gain insight and pay tribute to the hardship, violence, and grief faced by the people of former Yugoslavia during this tumultuous time.

1. Stari Most, Mostar, Bosnia and Herzegovina 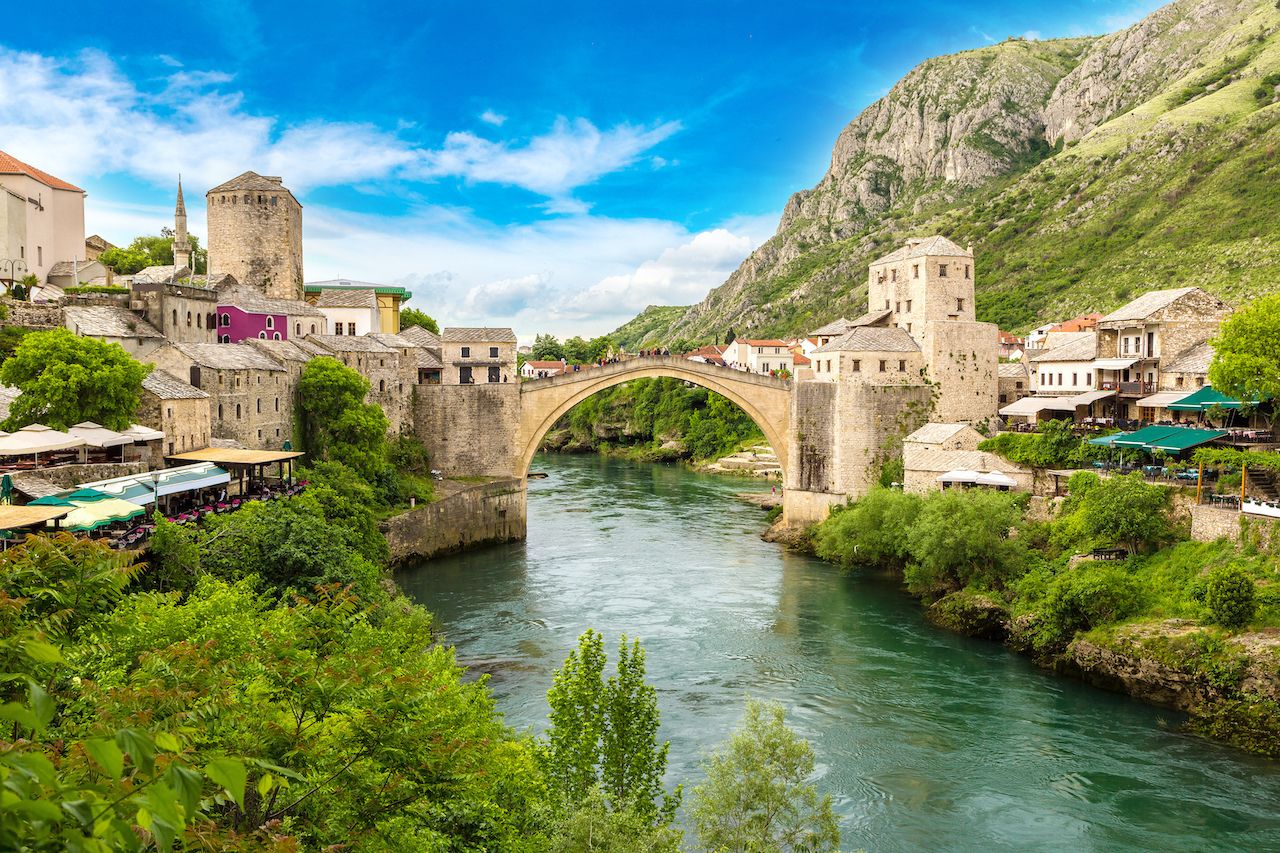 The town of Mostar is best known for Stari Most, or the Old Bridge, which was initially built by Ottoman rulers in the 1560s. The bridge is an official UNESCO World Heritage site, and it stood in its original form for over 400 years. On November 9, 1993, most of the historic town of Mostar was destroyed by the Croatian army — including Stari Most. This was a part of a military campaign where Serbian and Croatian forces worked together with the goal of overtaking Bosnia and dividing the territory to expand their respective countries.

Before the war, Mostar was home to disparate ethnic and religious groups: Muslims, Jews, Orthodox Christians, and Catholics coexisted in peace. Stari Most was a universal symbol of this tolerance. The destruction of the bridge is widely perceived as deliberate and unnecessary — rather than shelling the bridge for strategic purposes, the Croatian military wanted to send a ruthless message to all Bosniaks.

Stari Most was reconstructed in 2004 with impressive fidelity to its original form and materials. Today, the bridge represents reconciliation and hope for the future of Bosnia and Herzegovina.

Where: Stari Most, Mostar 88000, Bosnia and Herzegovina 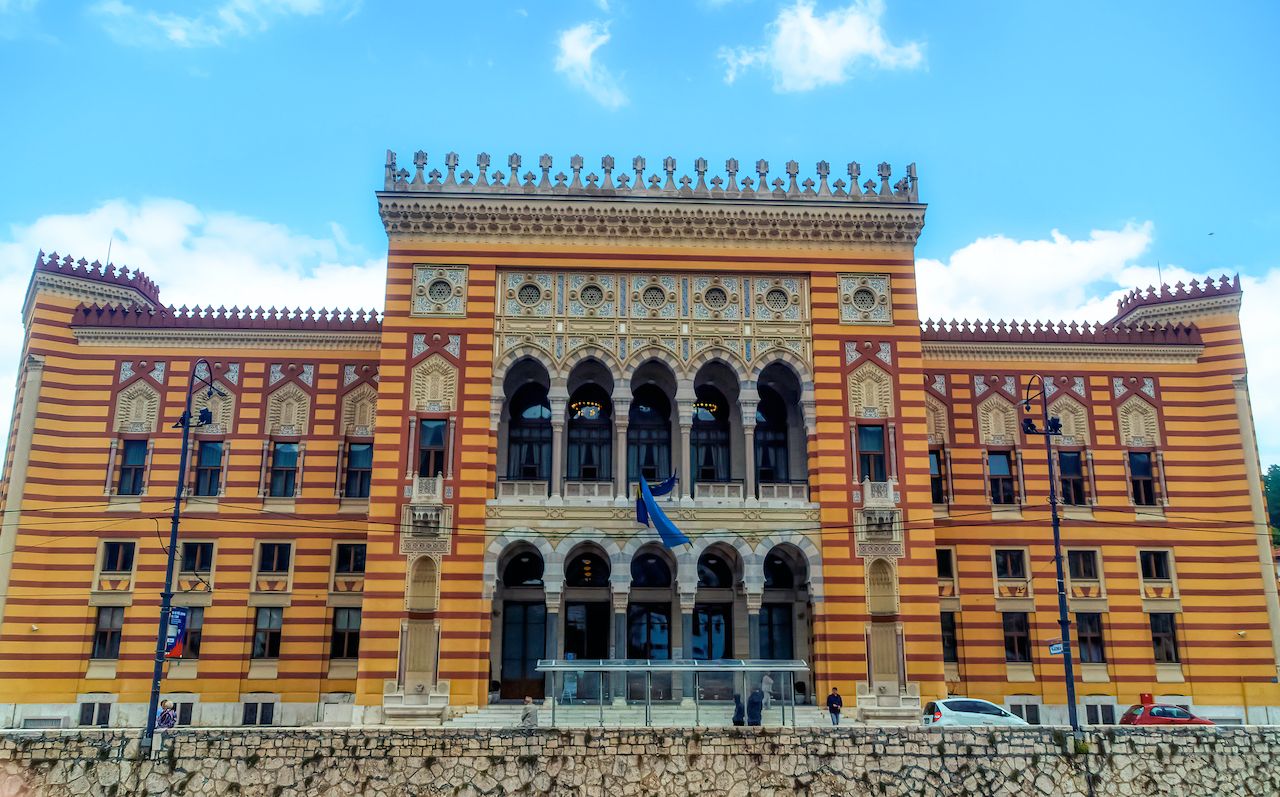 The Vijecnica, or City Hall, is located in Sarajevo, which is the capital of Bosnia and Herzegovina. This building was initially built in the 1890s when the city was part of the Austro-Hungarian Empire. Between 1949 and 1992, the Vijecnica housed the National and University Library of Bosnia and Herzegovina, including a collection of over 155,000 rare books and manuscripts.

On August 25, 1992, Serbian forces destroyed the Vijecnica as a part of the Siege of Sarajevo. This siege lasted for 1,425 days, which is the longest siege of a capital city in all of modern warfare. When the Vijecnica was destroyed, Bosnia and Herzegovina lost 80 percent of its contents, including three million books and hundreds of original manuscripts from the Ottoman and Austro-Hungarian periods. Similar to the attack on Stari Most, the destruction of the Vijecnica is believed to have been a deliberate destruction of cultural heritage, without any perceptible military gain.

The Vijecnica was rebuilt in several stages between 1996 and 2013. It reopened in 2014 as a National Monument, and today it serves as the capital’s city hall. You can tour the Vijecnica for $5.50, or you can enter the war crime information center for free. In this portion of the Vijecnica, all publicly available files from the International Criminal Tribunal for the Former Yugoslavia (ICTY) — including documents and videos — are stored and updated in an electronic database. 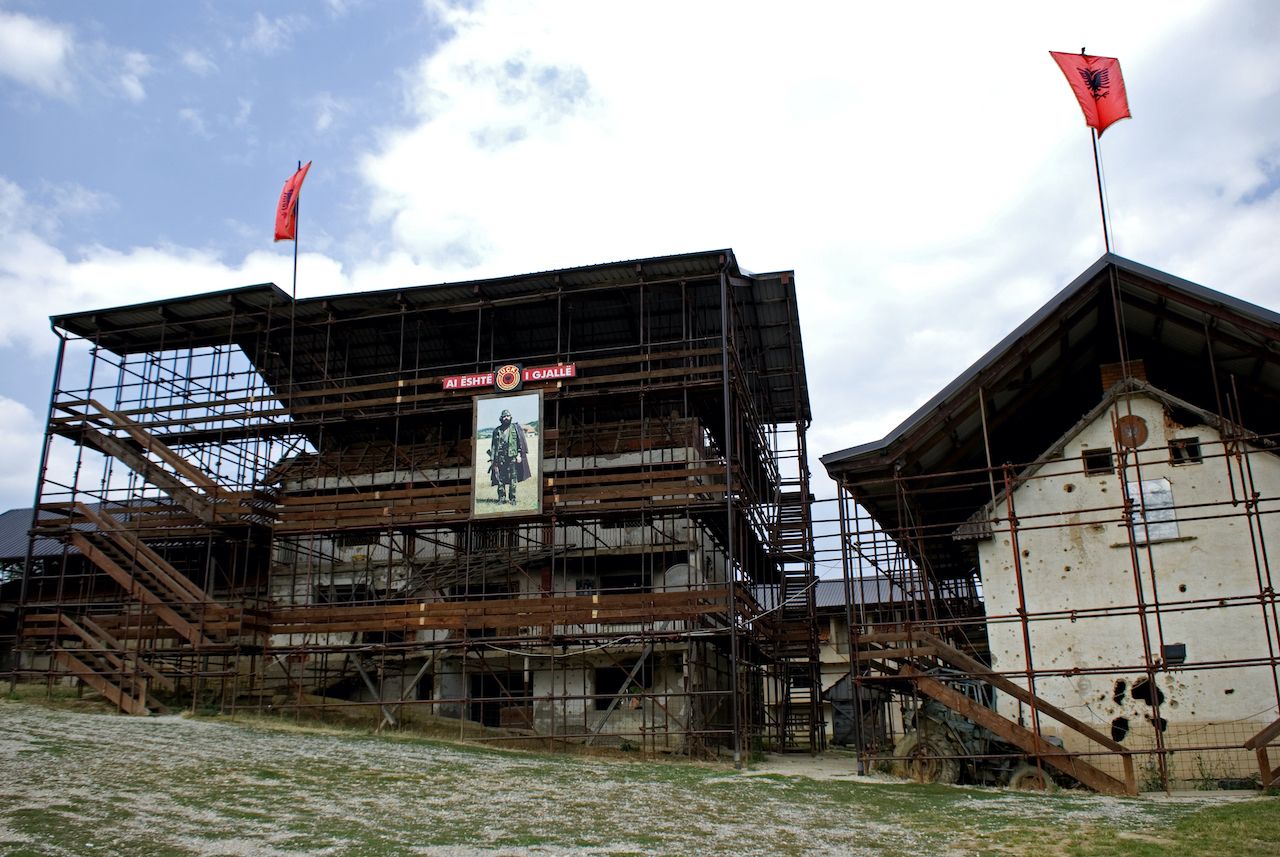 Adem Shaban Jashari was born in the village of Prekaz, and he was one of the founders of the Kosovo Liberation Army (KLA), a Kosovo Albanian separatist group that fought for the secession of Kosovo from the Federal Republic of Yugoslavia during the 1990s. The KLA hoped to detach from Yugoslavia and merge with Albania, which borders Kosovo to the south. On March 5, 1998, the Special Anti-Terrorism Unit of Serbia led an operation wherein Adem, his brother Hamëz, and 60 other relatives were killed. This is known as the Attack on Prekaz, or the Prekaz massacre.

After the attack, the Yugoslav and Serbia media depicted Adem Jashari as a terrorist while the Albanian media and international community viewed him as a freedom fighter. At the memorial, there are the graves of Adem and his 61 martyred relatives, a memorial complex with a museum inside, and the Jashari house. The Adem Jashari Memorial is considered a site of ethnic pilgrimage rather than a tourist destination, so bear this in mind when planning your visit. 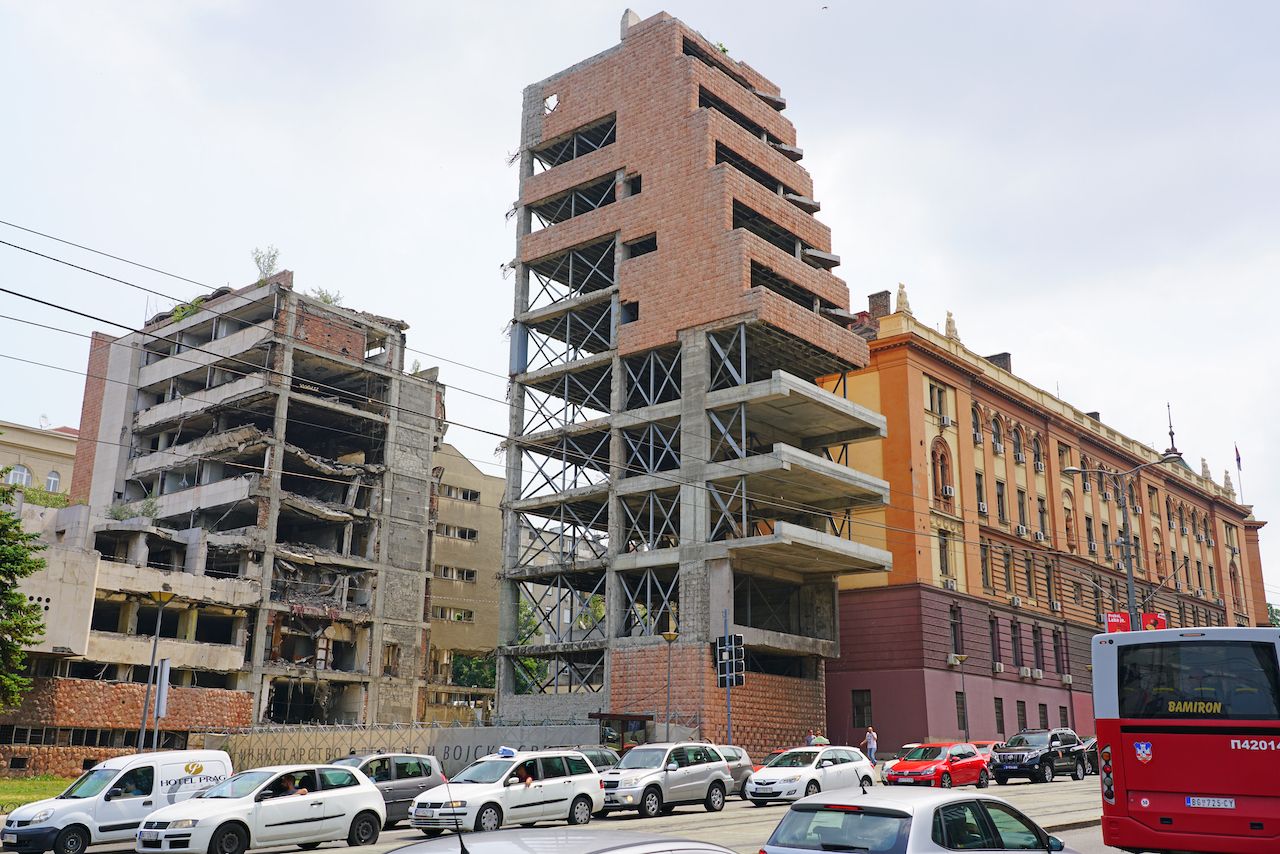 Today, the Serbian Ministry of Defense operates in a small, adjacent building that was unaffected by the bombings. Between 1999 and 2015, the bombed ministry building remained untouched. Currently, the future of the Ministry of Defense building is uncertain. There have been proposals to reconstruct the building according to its original 1957 design, to demolish it, or to convert it into a hotel. The stalemate is mainly due to a lack of governmental funding. For now, the remains are partially standing, with a large middle section of the original building demolished. 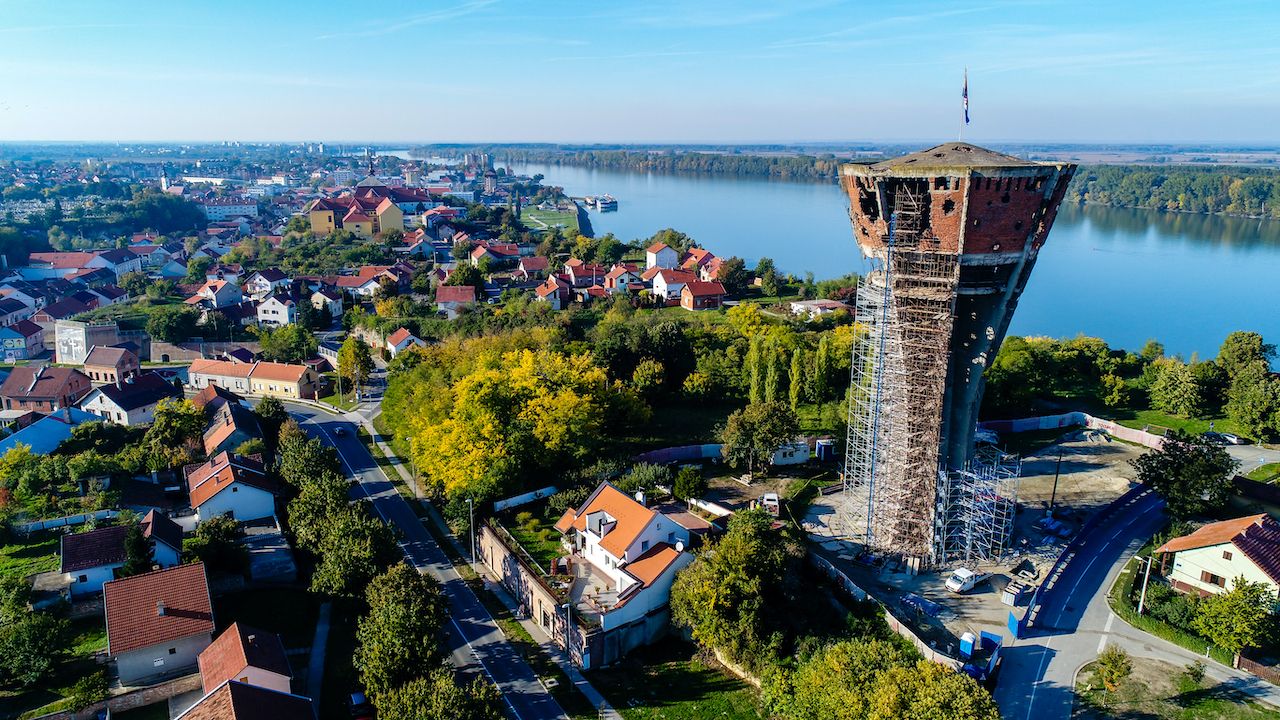 The Vukovar water tower is located on the banks of the Danube River, which also happens to serve as the border between Croatia and Serbia. Due to its location, Vukovar was the site of a major battle during the Croatian War for Independence (one of the many Yugoslav Wars). The Battle of Vukovar was an 87-day siege that occurred between August and November of 1991. Shells and rockets were fired by Serbian and JNA forces into the town at a rate of up to 12,000 a day, and the civilians of a Vukovar lived in constant fear for their lives. Vukovar officially fell on November 18, 1991, and it was ethnically cleansed of its non-Serb population (either through death or expulsion). The city was considered a part of Serbia until it was restored to Croatia in 1998.

The water tower of Vukovar was hit by artillery more than 600 times during the siege. Again, it is speculated that it was targeted for symbolic reasons, rather than military gain. There were initially plans to restore the water tower after the Yugoslav Wars ended, but the Croatian government instead decided to preserve the water tower in its post-siege form, as a testament to the pain endured by the people of Vukovar. In 2018, there were new proposals to reinforce the water tower and reopen a restaurant at the top, and the tower is currently undergoing renovations. 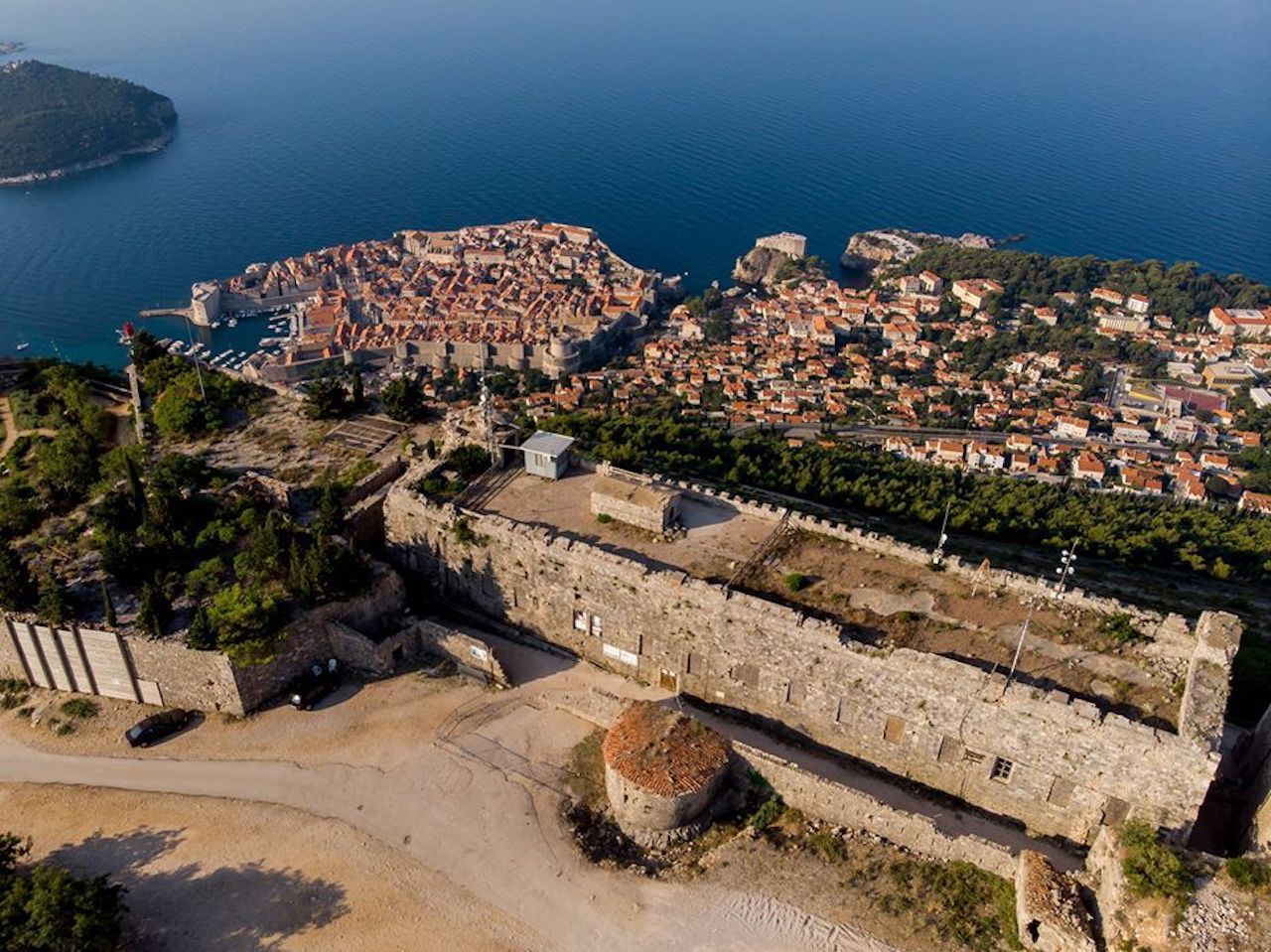 Vukovar wasn’t the only Croatian city to experience a devastating siege. Dubrovnik, a beautiful walled city and official UNESCO World Heritage Site on the Adriatic Sea, was all but obliterated in the Croatian War for Independence. Between October 1, 1991 and May 31, 1992, the residents of Dubrovnik were surrounded and attacked by the Serbian and JNA forces. It was practically impossible for the people of Dubrovnik to defend themselves, as there were less than 500 Croatian troops in the city area, and the Croatian Territorial Defence was disarmed by the JNA two years prior. However, Croatia won the battle by stockpiling and transporting JNA weapons acquired from other battles throughout the region.

The Homeland War Museum is located in an imperial fortress that sits on a cliff overlooking the city. The museum tells the story of the progression of the Croatian War for Independence between 1991 and 1995. As this museum is in Dubrovnik, it places a special focus on the Siege of Dubrovnik, and it showcases objects, photos, videos, and documents from this time period. The opening hours vary depending on the month, so check out the museum website to plan your visit. 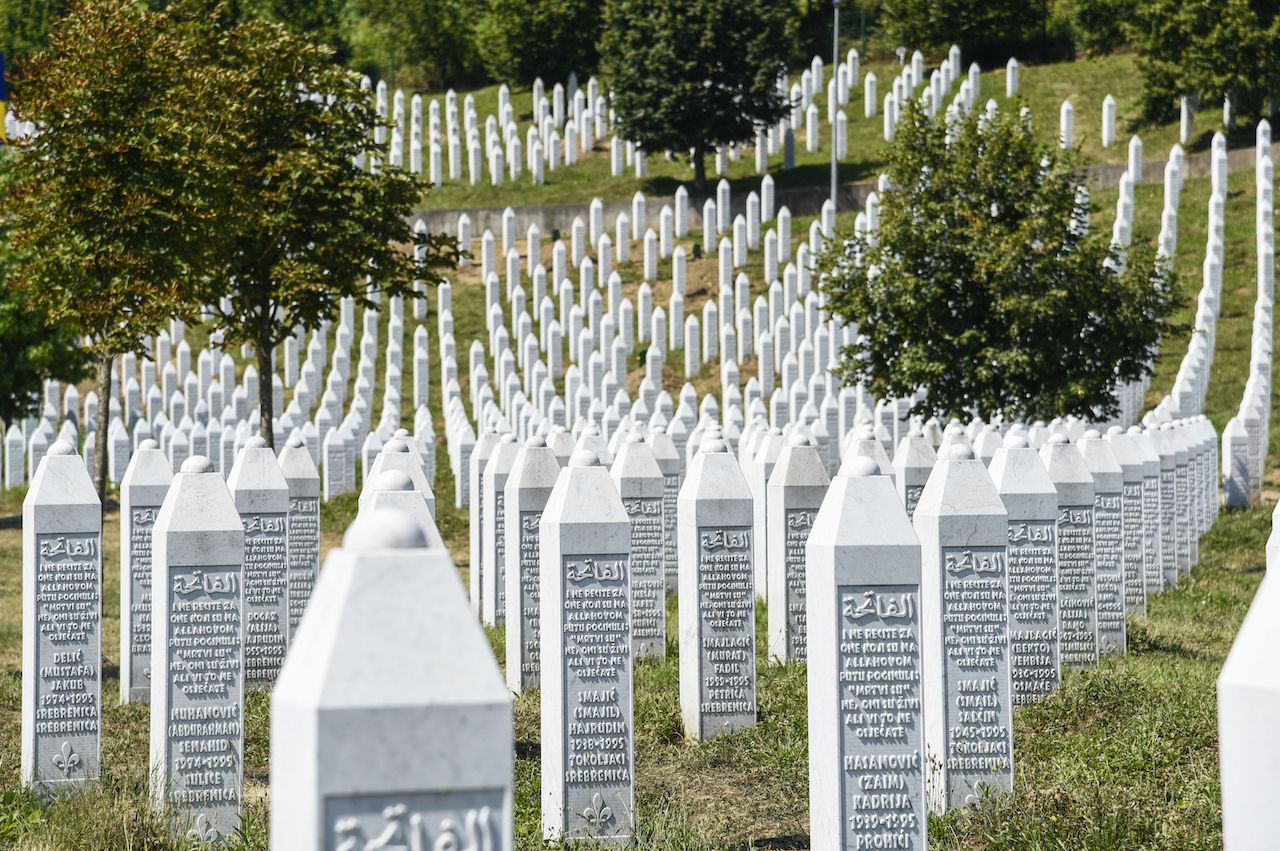 The Srebrenica Memorial in Bosnia and Herzegovina commemorates the Srebrenica massacre which took place in July of 1995. In less than one month, Bosnian Serb forces killed 8,372 ethnic Bosniaks in and around the Bosnian village of Srebrenica. Bosnian Serbs felt an allegiance to the country of Serbia, as they all belonged to the Eastern Orthodox Church. Bosniaks, by comparison, are predominantly Muslim.

The massacre of Srebrenica was perpetrated solely on the basis of ethnicity and religion — but before the Yugoslav Wars, Serbs and Bosniaks lived together in relative peace. The Srebrenica massacre is often considered the worst crime committed on European soil since World War II. However, the Serbian government refuses to use the word “genocide” when describing the events of Srebrenica, and this has impeded relations between present-day Bosnia and Herzegovina and Serbia.

The Srebrenica Memorial consists of two parts: a cemetery and an information center. The cemetery contains graves for roughly 6,000 of the Srebrenica genocide victims. The center is located in the former headquarters of the Dutch UN battalion, who were stationed in an attempt to protect the people of Bosnia. The center serves to educate visitors about the crimes committed in Srebrenica — it houses survivor testimonials, film installations, court documents, and other materials from 1995. The memorial is free to enter, and it is open on weekdays from 8:00 AM to 4:00 PM. 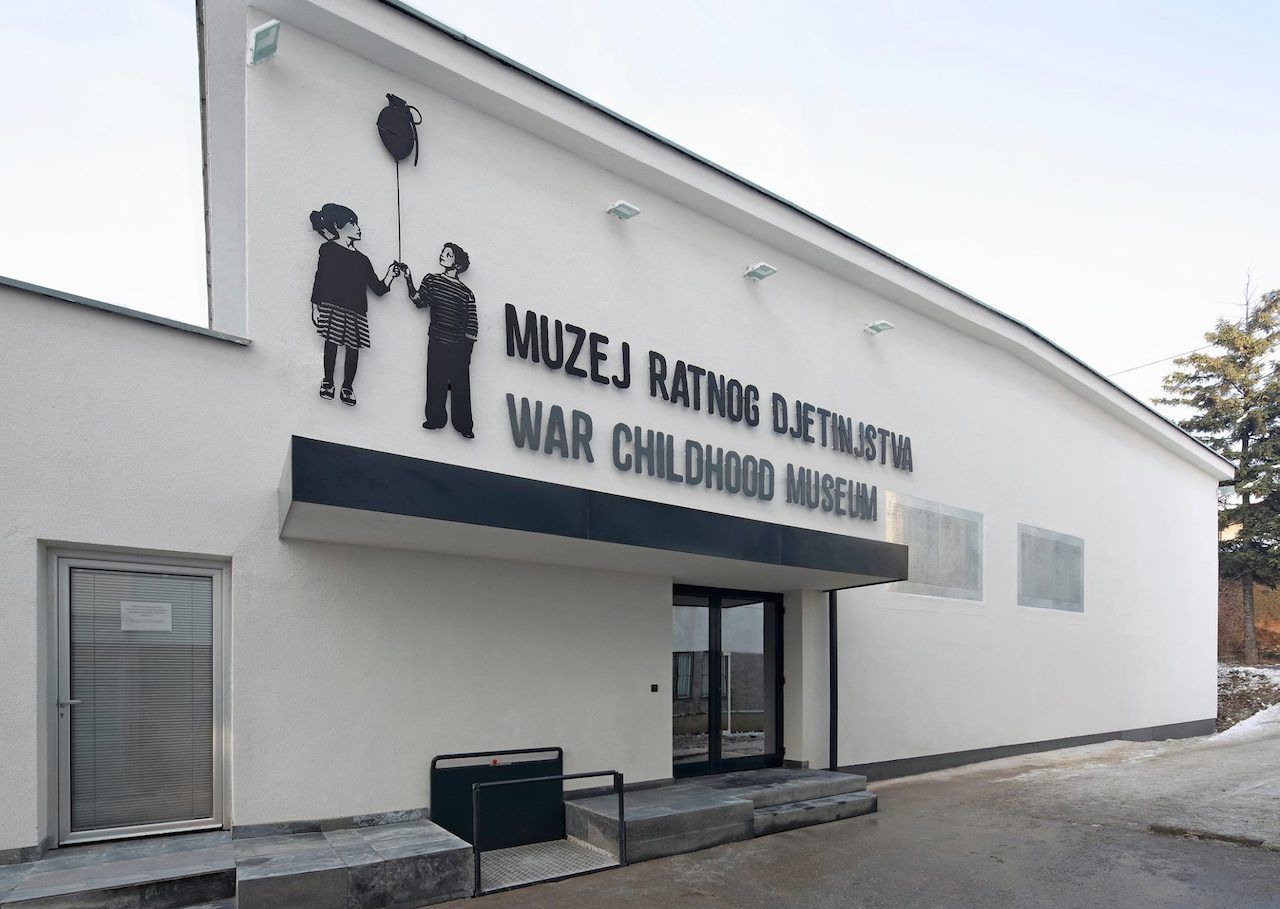 Sarajevo is the city that epitomizes the damage of the Yugoslav Wars. Before the 1,425 day siege, Sarajevo was home to a multi-ethnic population of Croats (Catholics), Bosniaks (Muslims), and Serbs (Orthodox Christian). When Bosnia and Herzegovina declared independence from Yugoslavia in 1992, the Bosnian Serbs launched a siege of Sarajevo in the hopes of creating a Serbian State. The Bosnian Serbs surrounded Sarajevo with 13,000 men stationed in the surrounding hills, and they were supported by the soldiers, arms, and supplies of the JNA. A total of 13,952 people were killed during the siege, including 5,434 civilians.

The War Childhood Museum is located in central Sarajevo, and it contains personal items, toys, writings, drawings, photographs, and videos from individuals who were children during the Bosnian War for Independence. Over 4,000 items have been collected from all parts of Bosnia and Herzegovina (with a focus on Sarajevo), and over 100 hours of survival testimonials have been filmed. This museum is an intimate, emotional exhibition of the ways in which children are damaged by war.

TravelWhy you shouldn’t overlook Kosovo on your Balkan trip
Tagged
Culture Museums Trip Planning
What did you think of this story?
Meh
Good
Awesome

Turkey officially changed its name. These 5 countries recently did the same.
Meet the people helping turn Reno into a bona fide street art destination
29 phrases to get you started learning Pidgin English
The boners of Bhutan: Understanding the country’s flamboyant penis art
50 African proverbs that will get you thinking