The good news is, if you want to experience complete weightlessness, you don’t need to be an astronaut. The bad news is, you still probably have to go to Florida.

Because sitting on the tarmac at Ft. Lauderdale-Hollywood International Airport is a heavily retrofitted Boeing 727-200 lovingly — if not accurately — nicknamed The Vomit Comet. And it’s as close to zero gravity as you’re getting right now without going into outer space.

The plane’s real name is G-Force One, property of the Zero Gravity Corporation, which sells half-hour-ish flights to nowhere where pilots fly in high-speed parabolas creating a weightless environment inside the cabin. There are no bathrooms, no seats, and no sense of what’s up and what’s down.

The plane was the brainchild of NASA engineer Ray Cronus, astronaut Byron Lichtenberg, and Dr. Peter Diamandis. They had witnessed NASA training astronauts for zero gravity for years and wanted to make that experience available to the general public.

“People want that dream of being an astronaut,” says Zero Gravity CEO Matt Gohd. “Ray thought there was research that could be done on the plane without going into space.”

After eight years and $10 million spent buying, retrofitting, and testing the plane, G-Force One finally gained FAA approval for zero gravity flights. It began offering commercial flights in 2005, and since then over 15,000 people have gone for the ride.

“Maybe one percent of people have vomited,” says Gohd.

Experiencing zero gravity not far from the ground 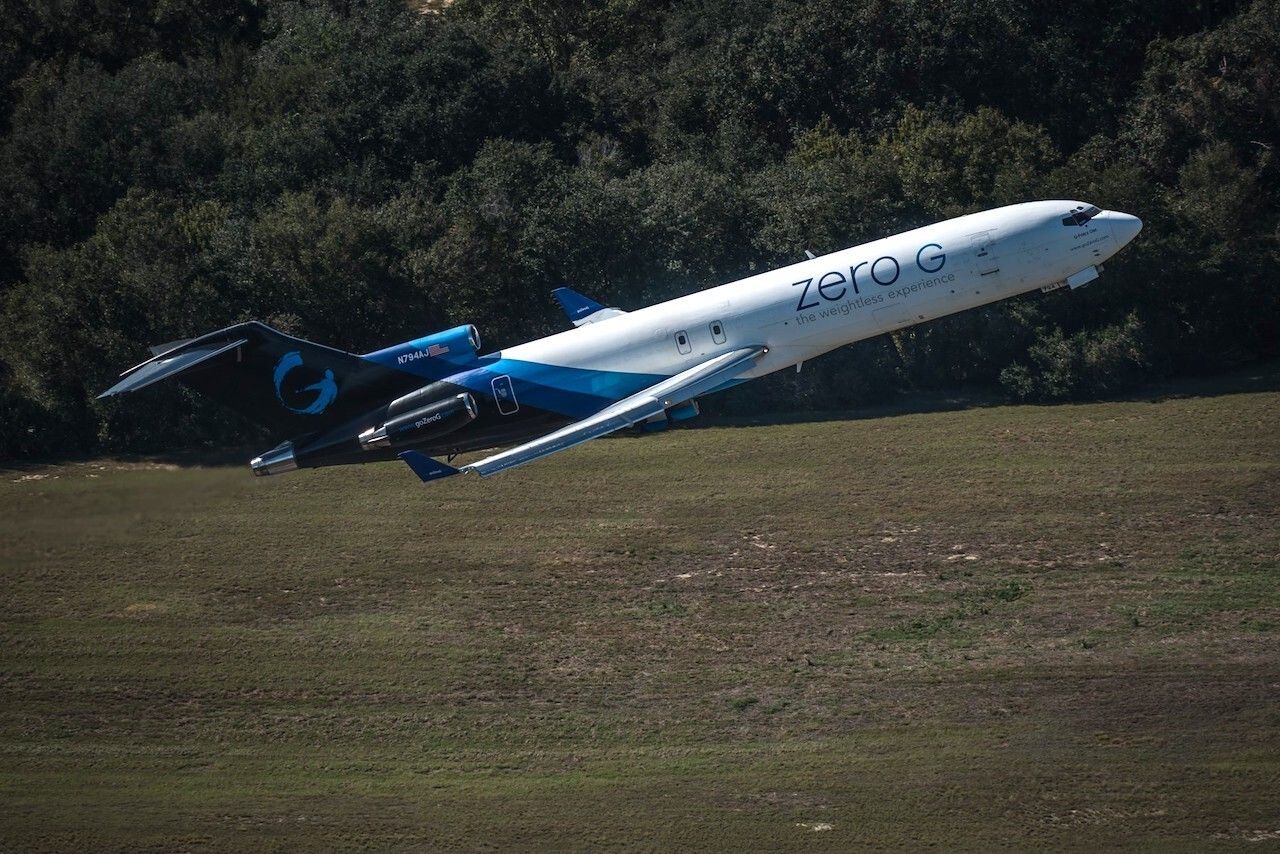 The reason people don’t vomit on the flight is because gravity — the stuff that churns up your elephant ears on the county fair Gravitron — isn’t working on you during Zero Gravity’s flights. Instead, it works on the plane as it makes a series of ups and downs in the sky while you float around giddy as a five-year-old on Christmas morning.

The plane begins with passengers laying on the ground inside the emptied-out fuselage of the 727. The interior is devoid of bathrooms and doesn’t have any traditional airline seats; it’s almost like a yoga studio where you get elevated, literally. Jets fire, and the plane builds up speed, then takes off at a 50-degree angle. For comparison, a typical commercial flight takes off at a maximum of 15 degrees, so the beginning is a bit abrupt.

You’ll feel a bit of gravity as you ascend, about 1.5 to 1.85 Gs. Or “like someone smaller than you laying on top of you” according to Gohd.

When the plane reaches the top of its arc, it begins to tip down, and as it does you feel yourself lift off the ground, experiencing your first bit of weightlessness. This happens because once that downward tip starts, you slowly separate gravitationally from the plane.

“As the plane continues tipping, you continue that separation, there’s no gravity holding you,” Gohd explains. “Gravity works on the plane but not on you. You don’t have the sensation of whether the plane is going up or down, and at that point in the parabola, you have separated from the plane as far as gravity goes. For that period of time, you’re floating.”

Each parabola maneuver lasts about 30 seconds. Once the plane heads back up, gravity softly attracts you back to the plane, and you return to laying on the ground. The highly trained pilots (each needs a special FAA certification) repeat the maneuver 15 times, giving you a total of seven to eight minutes of weightlessness.

Despite the frequent and steep ups and downs, the flight feels nothing like a roller coaster. When you’re screaming down the banks of Magnum Force, a huge part of the thrill is the increased forces of gravity. But there’s no gravity working on your aboard G-Force One. So the experience is more like scuba diving, where you float weightlessly in a calm environment, able to move in ways you can’t when gravity has taken hold.

Most of the flights are flown in zero g, though some parabolas will have forces similar to those on the moon — about one-sixth the force of gravity. No, you’re not allowed to take any golf shots while onboard.

A few rules and a lot of money

Gohd says the vast majority of the people who have vomited on G-Force One didn’t follow the rules laid out beforehand: Don’t drink the night before, eat the breakfast Zero G serves you, and leave your phone in your pocket.

Though that last rule can be tough to follow when you’ve dropped a lot of money on the ultimate piece of social media envy.

How much money exactly? Gohd says the average flight is about $6,000 per person, with as many as 36 people piling into the fastest commercial plane Boeing ever made. Private flights can be booked for $165,000 (plus tax) with a maximum of 34 participants. You can also book weightless weddings, though you should probably leave the cake on the ground.

If that sounds a little too steep, perhaps you should look into becoming a weightless research scientist. About 40 percent of the people who fly Zero G’s flights are researchers, testing everything from biomedical experiments to material science for a fraction the cost of doing it at the international space station. Though the cost of getting a PhD might still be more than chartering your own plane.

Though the flights are a great excuse for a Florida vacation, you can likely experience it closer to home. The plane tours — usually during summer — offering flights in cities around the country. Provided they have a large enough runway.

Or, if you’d like to make weightlessness part of a Euro trip, France has a similar experience run through Novespace called Air Zero G. The flights launch from Bordeaux-Merignac Airport, but only a handful of public flights are available as the bulk of their flights are used for research. If you’re lucky enough to snag a spot, your first flight will run you 6,000 euros.

So if you want to feel the effects of escaping gravity, you don’t have to wait for commercial space travel to become a reality. Just make your way to the tarmac in one of those locations, strap on a blue jumpsuit, and get ready to feel like an astronaut for a few glorious minutes. Though it may or may not change your life, it will certainly give you a sensation no one you know has felt before.

WellnessThese Astronauts Gave Their Pro Tips for Surviving Social Isolation
Tagged
Astronomy
What did you think of this story?
Meh
Good
Awesome

26 Signs You Were Born and Raised in Fort Lauderdale

You Can See Remnants of Halley's Comet Fly by This Week. Here's Where To Look.