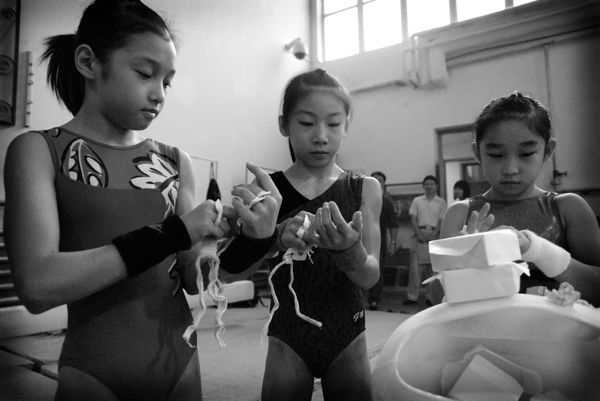 The Chinese women’s gymnastics squad took bronze in the 2000 Olympics. Ten years later, the International Olympic Committee has given the medal to the US team instead.

EVERY TIME THE OLYMPICS roll around, newscasters begin discussing the IOC’s age rules, and it seems like the age of Chinese athletes frequently gets called into question. Though coaches insist that China’s team members are old enough to compete in the Olympics, the question usually remains: Are China’s athletes really as old as they say they are?

Last week, the IOC announced that it was stripping China of its 2000 women’s team bronze medal in gymnastics because one of the team’s gymnasts, Dong Fangxiao, was below the age requirement at the time of competition. The International Gymnastics Federation’s rules state that gymnasts must be 16 years old. The IOC has found that Fangxiao was actually 14 years old when she competed.

China lost its bronze medal in the team event, and the US team moved up from fourth to claim the last place on the podium.

There was a time when it was acceptable for gymnasts to compete as children; Nadia Comaneci was only 14 when she won her Olympic gold medal in 1976. Citing the mental and physical stress that competition places on children, the IGF raised the minimum age to 15 years old in 1981, then again to 16 years old in 1997.

After this latest investigation into underage gymnasts, I have a feeling there may be further probes into another age-related controversy that surfaced in 2008. During the summer games that year, the IOC investigated another Chinese gymnast, He Kexin, after discovering conflicting documents that listed two different dates of birth for her. At the time of the Olympics, she was either 14 or 16, depending on which documents officials consulted.

As of today, Kexin and two other Chinese gymnasts who were under investigation still hold the medals they won at the 2008 Olympics. Still, if the IOC’s ruling on the 2000 Olympic team are any indication, no length of time is enough to bury controversies like these.

How young is too young? Are kids sacrificing their childhoods to be sports superstars?

For the perfect day of hiking and Colombian coffee, head to Jardín 9 epic places in the US to visit on your first #vanlife trip It took 29 years and a pandemic for me to go camping. Here’s what I learned. 9 of the clearest waters in the US to go wild swimming 12 beautiful Portuguese beaches you barely have to share