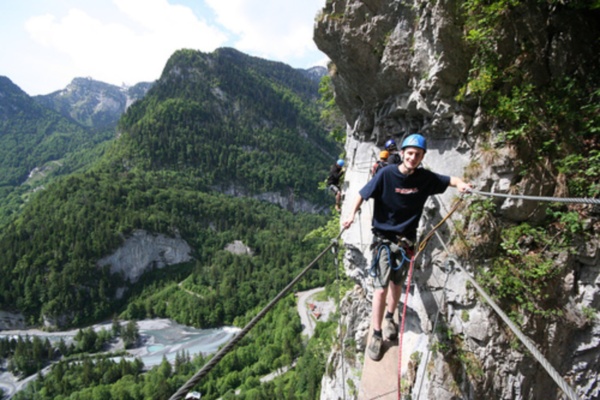 Vie ferrate are a different way to scale peaks, suitable even for those with little climbing experience.

A VIA FERRATA (“iron road” – plural: “vie ferrate”) is basically a footpath built into the mountains which uses cables, bridges, and steel ladders to navigate a vertical route, thus providing a safe way to go higher that doesn’t require climbing experience.

The First Via Ferrata

Vie ferrate began in the Italian Dolomites, back around WWI. Troops battled in the Alpine regions, even using avalanches as weapons to kill thousands. To access such high battlegrounds, they constructed some of the first vie ferrate.

Nowadays, hikers use vie ferrate for recreation instead. The Italian Dolomites have many accessible mountain routes, as do other countries like Switzerland, Canada, England, and Germany. Malaysia’s Mount Kinabalu has the world’s highest via ferrata, reaching an altitude of 3,800 meters. 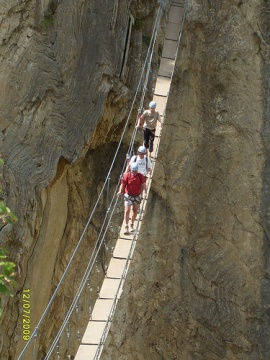 One of the greatest benefits of a via ferrata is that there is little equipment required. The three main pieces of gear are a helmet to protect against falling stones, a harness, and a clipping system.

The via ferrata clipping system is made of a short rope that clips into the harness, with the other end attached to two car for clipping onto cables.

Between the harness and the carabiner is an impact-reducing device which prevents a carabiner from breaking, either by distributing the weight of a fall through a metal plate or by slowly braking with strips of webbing stitched together in such a way that the stitches progressively tear in the event of a fall.

The system can also be used to clip onto a ladder rung or cable to allow the climber to rest.

Twenty-five to thirty meters of rope are necessary for routes that involve rappels. Crampons and ice-axes are generally overkill, but are a good idea for some technical winter routes that may ice over.

While you don’t need to be a pro climber, some training and physical fitness is required. Sometimes rental shops will require you to go through a short orientation course before departure to ensure that you understand how to use the equipment properly.

While via ferrata technique goes beyond the scope of this article, the number-one rule of the sport is to always make sure that at least one carabiner is attached to the safety cable at all times–you should never be moving both clips at once.
Whether they’re semi-automatic or screw-down, always ensure that the carabiners are locked when closed.

Keep in mind that this isn’t a sport for those who have vertigo. While some vie ferrate are fairly horizontal, like the Gorges de Salenys, most are very vertical and often quite high.

-In general, keep some distance between you and the climber in front of you, especially on steep inclines.

-Avoid knocking out rocks. When rocks are loose, move as close as possible to the person ahead of you to avoid large rocks falling before they gain much speed.

-Do not anchor yourself to the same section of a cable as someone else. Make sure there is at least one anchor point between you and the people ahead of and behind you. This will reduce the likelihood that the cable will snap in the event of a fall.

-Ensure that the two carabiners on the brake are facing in opposite directions. This way, if the carabiners’ gates graze against the rock, only one of them will be able to open.

-Check weather before heading out. Getting stuck in a thunderstorm is not a good idea when you’re climbing next to a metal cable at high altitude.

-Make sure your guide is a certified professional.

-Carry sunscreen, as well as snacks and water for the trek.

If you’re passionate about climbing, try your skills on these six American mountains.

What did you think of this article?
Meh
Good
Awesome
Bookmark
Posted In
Climbing
Destinations
Italy

Catania in Sicily is a blend of three distinct cultures, and it’s beautiful

9 traditional Sicilian dishes everyone who loves Italian food should know

The best places in Italy to explore by scooter

7 of the coolest US indoor climbing walls