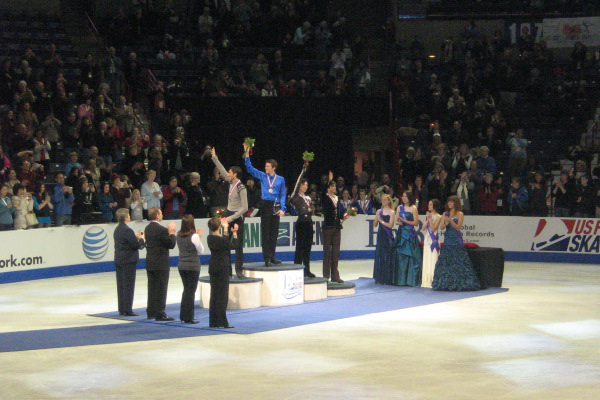 JOHN WEARS HIS WASHINGTON Huskies best: purple and gold sweatshirt, matching baseball cap. He’s a big guy, looks like he played football a couple decades back, probably a lineman. At 1 on a Sunday afternoon in January you’d expect him to be watching the NFL Divisional Playoffs.

Instead his eyes focus on a lone man in feathers hovering precariously in mid-spin a few feet above the ice.

“He pulled it out!” John shouts, ‘it’ being the triple Axel the skater just landed. “Now thirty seconds of footwork, a couple of spins, and he’s on his way to the Olympics.”

This man knows his figure skating.

He is one of numerous, passionate ice skating fans in Spokane, Washington this January. Spokane calls itself Skate City for a very good reason: this is the second time in three years the US Figure Skating Championships have been held here. Tickets for this event went on sale a year ago for this important pre-Olympic competition. The top three competitors in four events: men’s and women’s singles, pairs and ice dancing, will represent the US in next month’s Winter Olympics in Vancouver.

Fan fests at the local mall are packed. The city’s largest sports arena fills each day with skating-obsessed fans anxious to watch death spirals, camel spins, triple jump combos, and the the most difficult aerial move in modern figure skating, the quad. 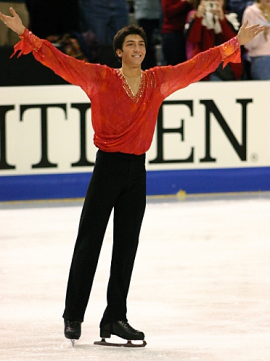 I’ve opted to attend the men’s final. Figure skating is one of the few sports where women command more attention and higher ticket prices. By watching the guys, I can see incredible athletes at a knock-down rate. The current men’s world champion, Evan Lysacek, is American, something US women haven’t managed since 2006.

The world champ sits in second place after the short program, trailing Jeremy Abbott, reigning US champion, by a few points. Johnny Weir, the androgynous king of figure skating, is a close third. Any one of the “Big Three” could win.

It all depends on the free skate, four minutes of quad burning, cardiovascular hell requiring each skater to complete eight jumps, three spins and two step sequences. Don’t ask me about the intricacies of how it’s scored. The tax code is probably less complicated.

The most dynamic performance comes from 26-year-old Missourian Ryan Bradley. He’s steps into the rink dressed like a Jane Austen hero, a Mr. Darcy complete with ruffled shirt and period vest.

“He’s on fire!” cries John off my right shoulder. The crowd claps along to the classical music and gives Bradley a standing ovation.

His split technical and performance scores are high, moving him from sixth place to first. Still, the top men have yet to skate – if one of them bombs, an upset is entirely possible.

But the Big Three are also on fire. Abbott skates perfectly, nailing his quad plus eight other triples. The risk doesn’t pay out for Lysacek, who’s flubbed quad toe loop costs him points and visibly rattles him. Ryan’s charismatic and accomplished free skate gets him a place as an alternate on the Olympic squad. In the end, the finishing order doesn’t shift.

Some may have ended up lower on the podium than others, but the best boys on blades are heading over the border next month.

For all you figure skating freaks, Matador Trips has a guide to finding free accommodation for the Vancouver 2010 Winter Olympic Games.

Why Spokane Is the Pacific Northwest's Next Big Spillover City

Bicycling the 'Recreational Trails of Idaho'

Hoopfest: 3 on 3 Street Basketball at a World Class Level