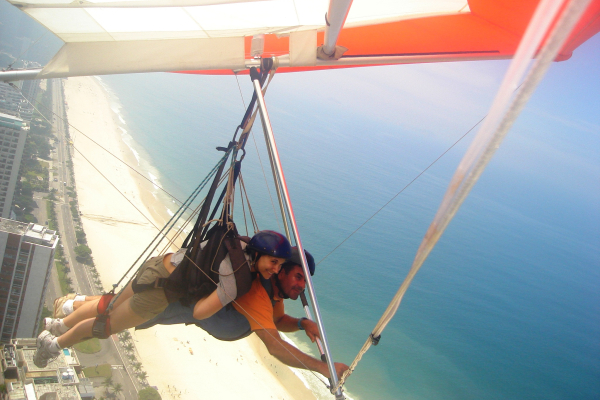 AFTER THE THUNDERSTORM that had hit us the night before, the Hilton Fly Rio Hang Gliding Center would undoubtedly shelve our excursion. At least that was what the concierge at our hotel had said. So I ate yogurt, bacon, piece after piece of candy-sweet pineapple, until I slumped over in my seat.

When your parents are as openly acrophobic as mine, you grow up convinced that you’re also acrophobic. Together my husband Jeff and I had surfed, biked around volcanoes, and dived with sharks as big as sofas. But it was no accident that I’d never agreed to adventures involving heights. That’s why I was puzzled to overhear him telling some new friends he wanted to impress that sure, we would love to try hang gliding.

I knew hang gliding was a tourist tradition in Rio—since the mid-1970s, I’d later learn—with nearly 10,000 tandem flights each year. I’ve never been one to decline a challenge, and this felt like a triple-dog dare. Jeff took me aside to coax, and I ultimately conceded.

Now, my anxiety seemed unjustified: this storm would be my savior. 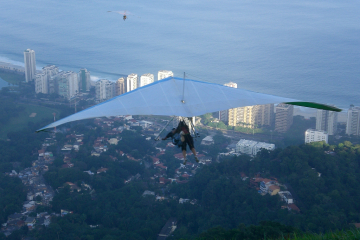 The sliding glass doors of the hotel entryway brushed open and closed as we waited. And then, to my dismay, it coasted into the scene: the black SUV that would transport us to a 1,700-foot-high hilltop in the depths of Floresta da Tijuca, the world’s largest urban forest. I felt the Ipanema tan drain from my face.

“Too much breeze for you back there?” Jeff asked our friends in the backseat. “Though then again, given what we’re about to do!” We both crack jokes when we’re nervous, and they were rolling off his tongue. Thud. The vehicle swerved as our driver’s eyes left the road while he introduced himself. One of the few things we understood through his thick Brazilian accent was
his nickname: Mosquito. “Did you really just say ‘Mosquito’?” Jeff asked. “Not ‘Eagle’ or ‘Hawk’?”

“We make dreams come true,” Mosquito said. “We help you fly like a bird!” He told us the story of an 84-year-old client: “See? Anyone can do it!” I asked for some music to drown out his transparent “you haven’t paid yet, don’t back out now” sales pitch.

We disembarked on a dusty plateau with a makeshift snack bar. A crowd was gathered on bleachers built into the cliff, and their roof was a 15-foot-long ramp of two-by-four floorboards. 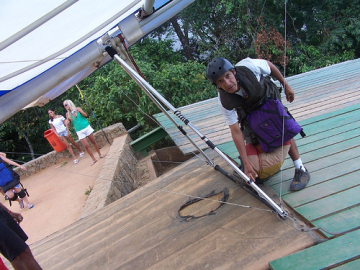 Staff members yanked each member of our group in different directions. Rony, a tandem pilot in a bright orange shirt and spiky black hair, stepped me into the armless cloth straitjacket that would attach me to the oversized kite. He and I sprinted back and forth together simulating takeoff, as if we were competing in a three-legged race.

“You will run as fast as you can, yes?” he insisted.

I nodded, and the breakfast in my stomach churned. The remaining saliva in my mouth tasted metallic.

In my peripheral vision, I saw Jeff in ready position at the top of the wooden runway. “I love you!” I shouted as if it would be the last time. He glared back at me as if this had been my idea, not his. I watched my husband disappear into the clouds.

I realized that the helmet strap didn’t hug my chin. “Is this safe?” I asked Rony, as I showed him the gap between strap and skin.

He responded only with a laugh, led me to the ledge and instructed me to keep my left hand on his spine and my right hand on a noose hanging from the steering bar at all times. His back was sweaty on my left hand. The frayed khaki rope splintered my right. 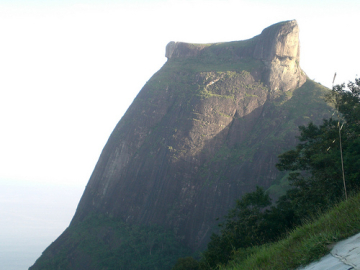 My legs sloshed like water balloons. But when we reached the edge, there was no drop of stomach or limp, freefalling body. We were flying, as promised, like an eagle, a hawk, a mosquito.

Besides my and my pilot’s breathing, all I heard was the wind echoing in my ears. I noticed details in the Brazilian landscape that I couldn’t possibly have seen from sea level. I wished I could swap out my smelly pilot and swap in Jeff. Or better yet, enjoy my flight in solitude.

Then it hit me: more than 1,000 feet between me and the ground. That was all. Rony grinned into a camera at the front right edge of our kite and clicked the button with his thumb.

Are the clips holding me to the glider made of metal or plastic? What if they forgot about one of the clips altogether? What would I do if I heard the sound of splitting fabric or tearing Velcro? Could I hold my full body weight from this thin rope and, if I could, what would happen during landing…landing! We never discussed landing!

I remembered reading once that bird bones are hollow; human bodies aren’t built to fly. As we circled, I didn’t feel weightless; I felt every ounce of my mass, multiplied.

Would it be better if I were to plummet into that mass of trees over there? Into the pool behind that house? The ocean? Is it true that your body goes into shock during free fall—that you don’t feel the pain of impact? 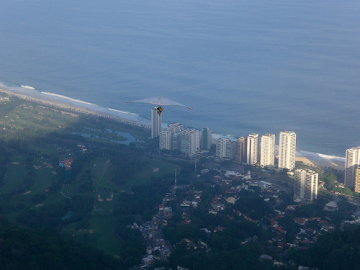 Without warning, Rony ripped off my leg straps. My limbs dangled with awkward freedom. As our speed slowed, we hovered over the shoreline.

Jeff, also grateful for solid ground, proudly waved to me from the shade of a nearby palm tree. I wobbled over, feeling a manic rush of adrenaline, and we swapped stories. His pilot had taken four cell phone calls—in flight—and their out-of-control beach landing had involved a gritty tumble. But he loved it. I told him I was really proud of the bragging rights, but couldn’t imagine doing it again.

I thought back to the sight of Rio de Janeiro from above—mountains, mansions, ocean, favelas—and I couldn’t come up with a better way to take in the sweeping view. In my peripheral vision, I caught a glimpse of the next aircraft approaching the sand.

I reconsidered with a nod. “Fine. Just call me Mosquito.”

For the perfect day of hiking and Colombian coffee, head to Jardín
The best national parks to visit this winter
The best cold-weather hiking in New Mexico
How to hunt for mushrooms in Oregon’s coastal rainforest
Beyond the resorts, Colorado’s lesser-known mountain towns are the next big destinations

Why you need to go gliding above Boulder

The 7 scariest sports to watch, or try, this year

Everesting is the hardest cycling challenge ever, and it’s blowing up