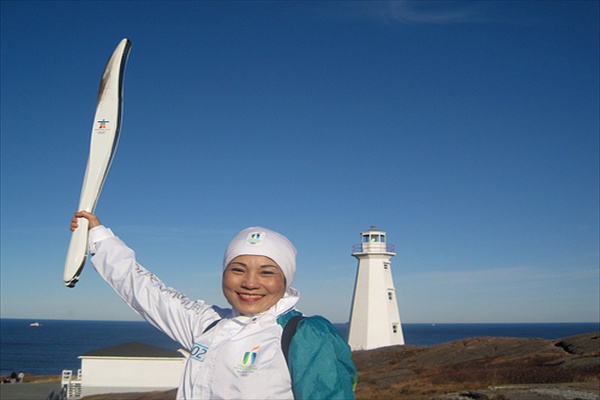 The Olympic Flame is making its way across Canada, visiting over 1000 communities while following the path of the northern lights.

IN EACH DESTINATION, patriotic torchbearers carry the globally recognized symbol over a short distance which will total more than 45,000 kilometers.

The Olympic Flame has been around since the ancient Olympic Games held in Olympia, Greece. Back then, a flame would be ignited by the sun and kept burning until the games were over. The Flame did not appear in modern form until the 1928 Olympic Games in Amsterdam.

The Olympic Flame’s journey still begins in Greece, and is recognized as a symbol of peace for those nations participating in the Olympics. On the opening day of this year’s journey, the Flame was lit in Olympia, using just the sun’s light and a parabolic mirror, in accordance with ancient ritual. The Flame was then passed to Vassilis Dimitriadis, who launched the Vancouver 2010 Torch Relay.

Nowadays, things are a little more technologically advanced. Air intakes provide sufficient oxygen to the Flame so it remains burning, a dual burner system keeps the Flame from being extinguished, and blended fuels ensure brightness even in the most extreme Canadian weather conditions. 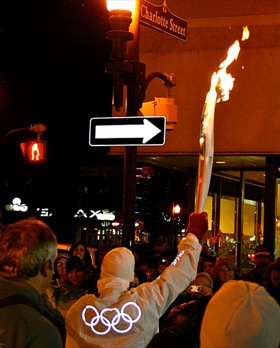 I knew very little about the predetermined route of the Olympic Flame, but I did know that my province, Newfoundland was its first Canadian destination.

Following some news sources, I learned the Olympic Flame was being exchanged between torchbearers in a dory, a traditional Newfoundland fishing boat, at the mouth of Petty Harbour. I assumed the celebrations were over.

However, when I left the office at the of the day, I emerged onto Water Street in downtown St. John’s to find people lined up along both sides of the road. I found myself standing among the masses, completely unaware of what was going on.

When the torch and its procession of Olympic hysteria finally turned around the corner, the crowd erupted. People sang, clapped their hands, and shouted. A man ran by, shoving two Olympic flags into my hands. Kids ran beside the Flame, reaching out to become a part of history. I started grinning, waving my flags lamely, completely caught up in the moment and united with my peers.

The Greeks must be proud to realize their ancient history is still creating international unity. As IOC president Jacques Rogge said in his speech at the lighting of the Flame, this tradition is here to stay.

“The longest national Olympic Torch Relay in history will create a spirit of global community and world citizenship. It will inspire new hopes, new dreams, particularly among the younger generation, to take part in the Games. It will invite Canadians and visitors from around the world to gather and celebrate the Games with glowing hearts.”

Are you attending the 2010 Winter Olympics in Vancouver? Tell us about what you’re most looking forward to.

For the perfect day of hiking and Colombian coffee, head to Jardín This epic new film ‘Breathtaking’ follows climbers on the world’s most dangerous mountain: K2 England is opening the world’s longest coastal path. Here’s how to plan your walk. 11 parks in Western Canada that won’t have you bumping into other travelers The Jordan Trail: Hiker’s guide to crossing the country in 40 days and 40 nights