THE 2014 WINTER OLYMPICS begin in Sochi on February 7th. Much attention has been paid to recent violence near Sochi, current anti-gay rights legislation in Russia, and the issue of safety and security for the athletes and spectators at the games. People all over the world are upset that the Olympics might be boycotted for political reasons, or not attended because they aren’t safe. 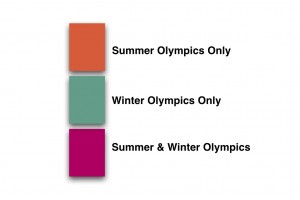 Rightly so. The Olympic spirit is one of inclusion, depicted clearly in the Olympic symbol: five rings, one for each continent, the colors chosen so each country in the world’s flag has at least one of its colors represented. Since 1896, in that same spirit, the games have been held all over the world to share the glory and responsibility. But not really — there have been a lot of repeat hosts. In the map below, countries in orange have hosted summer games, countries in green have hosted winter games, and countries in magenta have hosted both.

1 Not included: games held before creation of International Olympic Committee in 1896, games cancelled during WWI and WWII.
2 Included: Sweden as 1956 host (they hosted the equestrian events because there was a quarantine in Australia that year), Bosnia and Herzegovina 1984 winter host (the host was Sarajevo which was in Yugoslavia and is now in Bosnia and Herzegovina).

What did you think of this article?
Meh
Good
Awesome
Bookmark
Posted In
News Outdoor