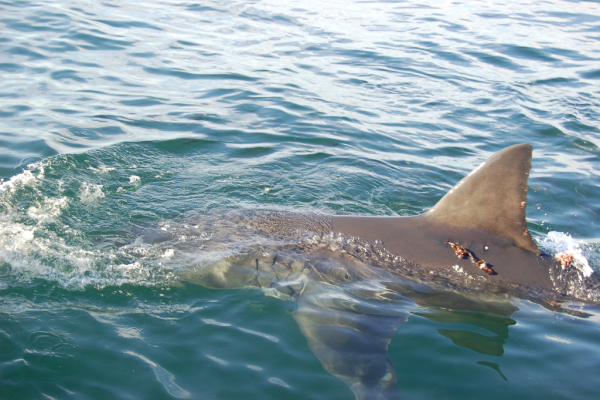 Australian scientists are testing a new great white shark monitoring system that will text a warning to lifeguards whenever one of the predators gets too close to shore.

As part of the program, researchers from Western Australia’s Department of Fisheries have fitted over 70 great white sharks with satellite tracking tags. An array of acoustic receivers installed in the sea floor half a kilometer out from various Perth beaches monitors the sharks’ movements.

Whenever a tagged animal is detected, the receivers automatically send a text message to area lifeguards warning them to clear the water.

The sensors also forward data to researchers, who hope to use the information to build a clearer picture of shark behavior and movement patterns.

Senior research scientist Rory McAuley told the Telegraph that sharks had only been detected four times since the receivers went online in May.

“The information we are hoping to collect will hopefully provide us some answers to the questions we are always asking about how long white sharks spend off our beaches, whether they come back, is there a season, do they come back one year after the other,” said McAuley.

“I think the public’s fear of sharks stems largely from a fear of the unknown.”

Perth’s beaches are some of the world’s most dangerous for shark attacks. In the past nine years, there have been 12 attacks, including two fatal maulings.

Tagged
Outdoor Perth, Australia Australia
What did you think of this story?
Meh
Good
Awesome

Colorado’s new Palisade Plunge is the ultimate mountain bike mega-trail
For the perfect day of hiking and Colombian coffee, head to Jardín
The 11 World Surf Reserves have the most iconic waves on the planet
Beyond the resorts, Colorado’s lesser-known mountain towns are the next big destinations
How to hunt for mushrooms in Oregon’s coastal rainforest