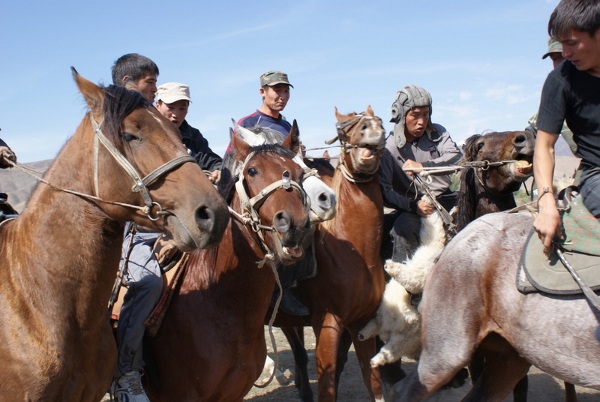 Kok boru is not a game for people with weak stomachs. Sophie Ibbotson goes to a match in Kyrgyzstan.

BETTER KNOWN BY its Afghan name, buzkashi, the central Asian game of kok boru is the most likely forerunner of modern polo. Played between teams of up to 200 riders, the traditional goal of the game was to capture a sheep or goat from an opposing village and race back home with it. 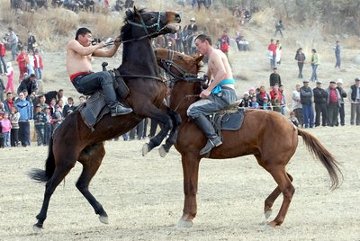 More formalized games are now played on weekends in parts of Kyrgyzstan, on pitches roughly twice the length of a football field. Players try to score by throwing the goat into the goal, a circle of rubber tires.

These days, the goat is dead before play commences. The head and legs are removed and the resulting holes sewn up to minimize the spread of entrails across the field.

Besides horsemanship, kok boru takes strength: carrying a 60-pound goat in one hand is no mean feat, particularly when someone is trying to wrestle it from your grasp.

I caught my first game of kok boru by the riverside in Ashu, Kyrgyzstan. The two teams, each comprised of a dozen wiry men, passed acrid-smelling cigarettes while the referee reminded them of the rules: no knives, no guns, no swearing.

The game began when the referee dropped the goat to the ground. An instant later, three dozen hooves stamped around the goat carcass while the riders leaned down and grabbed for a handful of fleece. 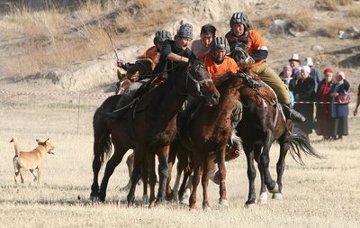 Finally, a player got a hold on the goat and broke out of the ring of horses, bolting down the field like a rugby player emerging from a scrum.

Actual weapons may have been banned, but there was little damage the players couldn’t do to each other with their horses or their bare hands. Horses reared and crashed flanks, and riders lashed out with their whips at both animals and opponents, shouting and screaming throughout it all.

At first, I watched from the sidelines with the other spectators, mostly 10 to 12 year-old boys who, already skilled horsemen, were keen to pick up tips for when they were strong enough to play. 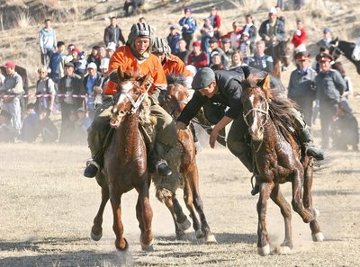 Thinking I was in a position of relative safety, I moved behind the goal. Seeing the horses hurtling toward me was exhilarating. Each time one approached the goal, I would shrink down and start praying.

The game ends when the referee becomes bored or, as in our case, the goat has disintegrated. The tenderized goat makes an ample supper for players, along with enough Kyrgyz vodka to ensure that the inevitable pain of cuts and bruises gets put off for another day.

Tagged
Outdoor Afghanistan
What did you think of this story?
Meh
Good
Awesome