I’ve been reading about gear a lot lately. I’m in the market for new climbing equipment: I just moved to Moab, Utah, and I’m in the process of replacing my New England rack of hexcentrics with cams, which are pretty much the only things that will hold in the parallel-sided cracks around here.

I don’t want to buy Grade B crap that I’ll have to retire after half a season, so I’ve spent time checking out reviews on sites like SuperTopo and Alpinist. I’ve found that the reviews that I take away the most from are the narrative-style ones, where instead of just saying something like “The trigger is a little stiff,” the reviewer talks about how he climbed three pitches up some sandstone tower, got pumped, struggled to get the piece in, and fell.

I’m even more stoked on authors who flip the review formula around and use gear as a vehicle for telling their own stories. In December, we published The Surfboard as Memory Stick, by writer and former pro surfer Jamie Brisick (check it out if you haven’t already). In the post, Jamie recounts his life in terms of the boards he’s used, linking different boards to different friends, contests, and developments in his career. 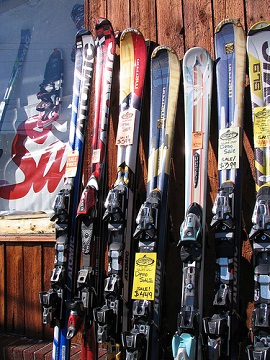 I love how organic and personal that method of storytelling can be. Being exposed to it starts triggering the memories I have attached to different pieces of equipment.

Do certain pieces of gear bring back specific memories for you?

Every time I see a rainbow rail in a terrain park, I’ll think of how my friend Vince caught an edge on one and split his rental board down the middle during the last run of the season at Cascade Mountain. I’ll remember other things too: how Vince and I didn’t know anyone else on the ski club trip; how we played around in the halfpipe because no one we knew was there, so it was ok if we fucked up and embarrassed ourselves; how it was sunny and there was real powder covering up the icy artificial snow, and it made me sad to think that I would probably kill my Saturdays for the rest of the winter sleeping in and kicking around the house.

When I see Black Diamond Camalots in a store, I’ll always think of the battered set my climbing buddy Grant had, how his #2 caught my first lead fall at a crag in the forest preserve in Quincy. I’ll also think of the frog we found squeezed into a seam halfway up a 50-foot slab, how Grant strayed off-route and freaked out, slapping his way up what turned out to be a 5.11 arete.

I have gear with memories that aren’t even mine. I’ll never use the old Chouinard climbing harness that my friend Nils’ dad, Eric, gave to me, but I won’t throw it away either. It’s stitched out of thick, grubby white webbing, and doesn’t have a belay loop or gear loops. It makes me think of the black-and-white photos of Eric that I’ve seen hanging in their house: him in his twenties at Enchanted Rock, shirtless and with an afro and goatee; him staring placidly into the camera, half-covering his face with a hemp leaf.

We want to read your gear memoirs. Flip the review formula around: instead of using an experience to say something about a piece of gear, use a piece or several pieces of gear as the anchor point for a story about your experiences. Any form is cool with us, as long as you tell the story in a ground-level, narrative style.

Send submissions to adam[at]matadornetwork.com. Check out our contributor guidelines if you have any questions about writing for Matador.