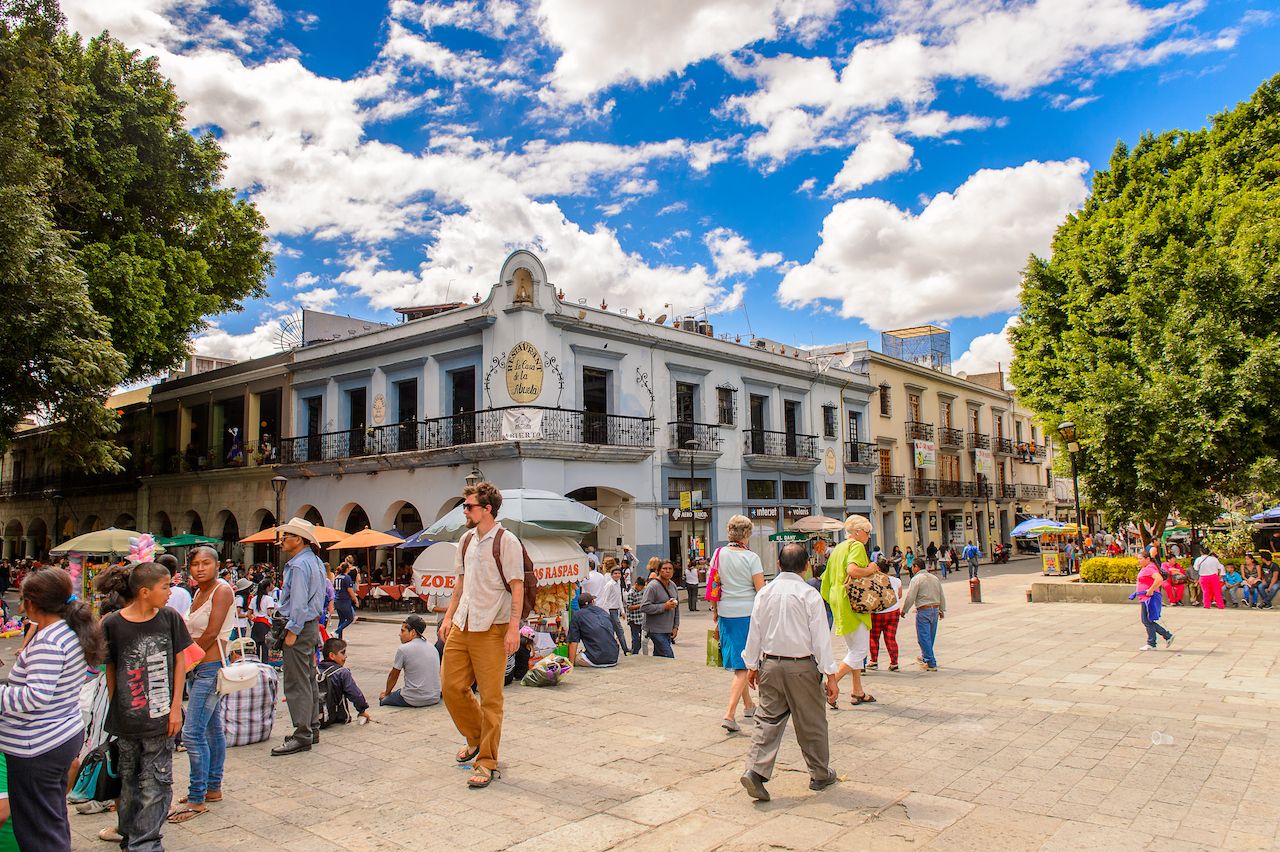 Both the state and its eponymous capital make the list here, with the former being home to some of the most compact diversity in Mexico, both cultural and in terms of wildlife/terrain, and the latter a UNESCO-recognized city of 265,000 showcasing an abundance of well-preserved colonial architecture.

The ruins of Monte Alban, an ancient capital city of the Zapotec culture with a history going back 2,500 years (making it one of the oldest Mesoamerican sites), is just six miles from downtown Oaxaca. (Warning: As a result, it does get crowded.)

In town, you can study the language of the people who built Monte Alban: “The Universidad Autónoma Benito Juárez de Oaxaca (UABJO) offers semester-long courses in Zapotec, with four evening classes a week, for 500 pesos (around $50 USD). These courses usually go from September-December and February-May.”

There are many places to study Spanish too, which is a highlight for Nate Cavalieri, Matadorian and author of the Oaxaca chapter in Lonely Planet’s most recent Mexico guide:

One of my favorite experiences traveling in Oaxaca was seeing the work being done at the Ollin Tlahtoalli Center, a language school and nonprofit arts advocacy center. I’ve since sent friends to study at Ollin Tlahtoalli, which is operated by an energetic guy named Omar Núñez Méndez. Méndez taught himself English by hanging out at Oaxaca’s expat library and eventually studied linguistics on a Fullbright at the University of Illinois.

The program he offers may be bit less conventional than others in Oaxaca but is notably committed to the community, setting up language exchanges between local artisans from neighboring indigenous communities and visiting Spanish students.

One particular conversation with Omar — about drug violence and the perception of “danger” in Mexico for US travelers — hit me really hard. He noted the drug violence that grabs headlines in the US and scares away travelers is mostly limited to people involved in the drug trade. He then pointed out that many Mexican travelers, who absorb their own media about random gun violence in the US, fear traveling north just as much, or more.

Down on the coast in Oaxaca state, communities like Huatulco (a nine-bayed resort development backing up to a national park and the Sierra Madre del Sur mountains), Puerto Escondido, and Mazunte continue to be well traveled by gringos looking for waves, sand, and safety.

For more travel tips, check out the MatadorTV post Find a cheap hostel in Oaxaca, Mexico. 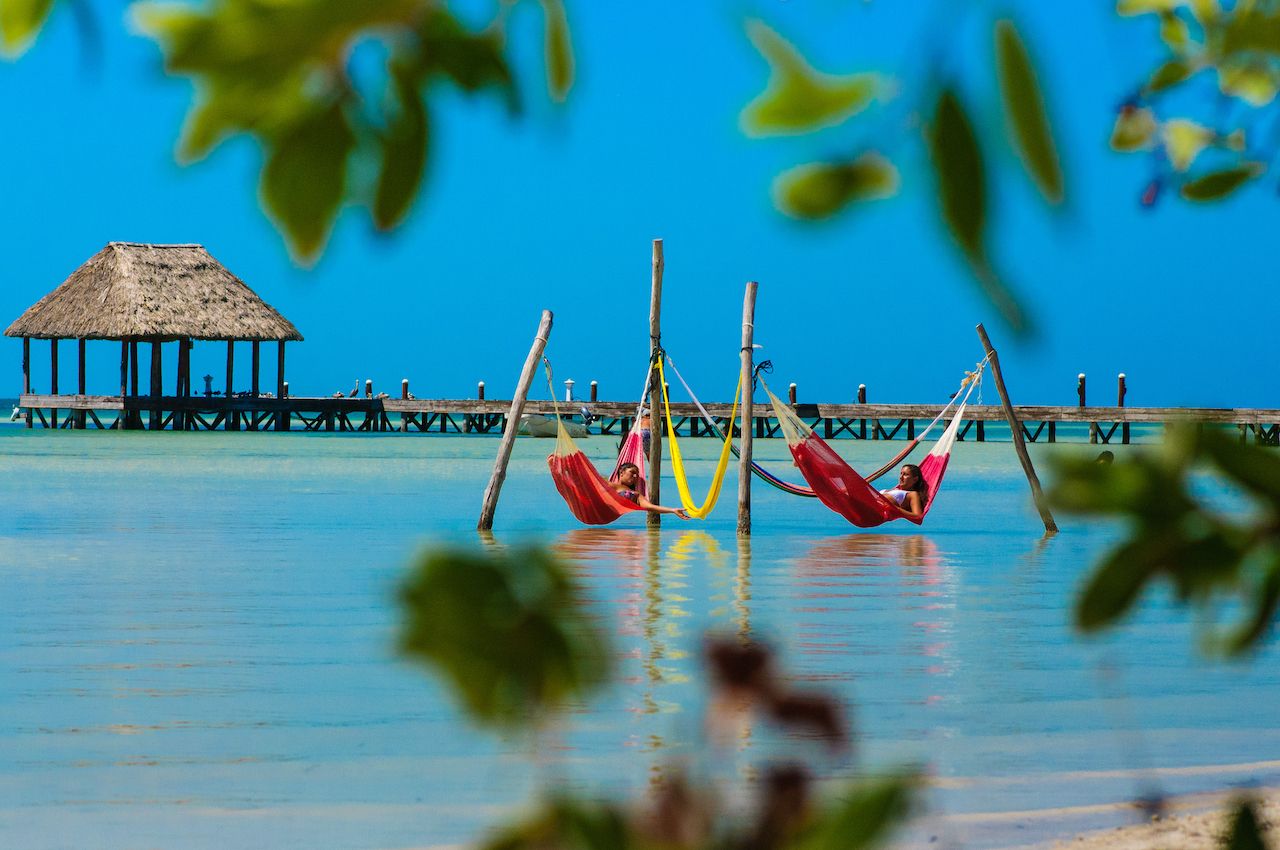 On the map, Holbox doesn’t look too far from the mega-resorts and Senor Frogs of Cancun, but this is a completely different destination. The streets are all white sand, and the biggest attractions are the whale sharks and large bird species that frequent the waters surrounding the skinny island.

Seven miles of shallow lagoon separate Holbox from the northern tip of the Yucatan Peninusula — this is where the birds hang out. To the north of the island, in Gulf waters, whale sharks feed from May to September.

Due primarily to the development of whale shark tours in recent years, tourism has become the major economic driver on Holbox — similar to, but not yet nearly to the same extent as, what’s happening in Sayulita. For example, higher-end accommodations have started to appear, but they’re of the small-scale, boutique variety, concentrated on the west end of the island.

But folks with skills have fun too, according to Matador contributor Misty Tosh:

One very windy & very lazy afternoon exploring Isla Holbox, we happened to run across some insane windsurfing. These two dudes were out on the water (ps it was freezing) doing flips, stunts, tricks and the like for hour after hour. We watched on for a spell and then cruised on, in awe of their bods. It takes some fierce athleticism to rock those kinds of moves for such a long time.

Cut to — dinner than night at the cutest Italian restaurant down a side street off the square. It had all the little un-Mexican touches of a quaint European cafe, so we stopped in for some lobster spaghetti (con homemade noodles). I noticed the incredibly tan, fantastically fit chef was limping and walking funny like a cowboy and somehow I knew — he’s the windsurfer. Nice to put a face to that experience.

To get to Holbox, catch the ferry from Chiquila, which is ~3 hours by bus, or shorter taxi ride, from Cancun. 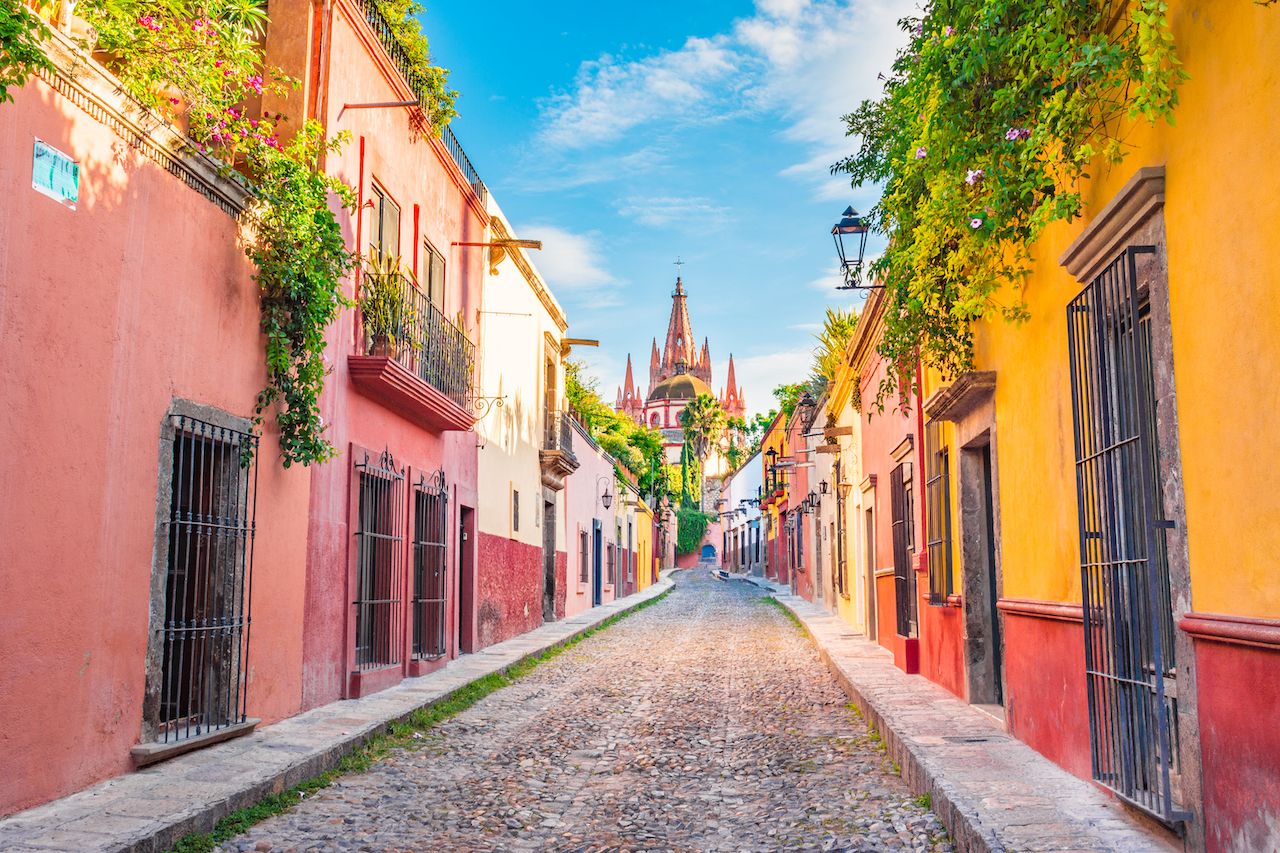 Like most expat communities in Mexico, San Miguel remains a safe place to travel.

As much as 10% of the population of this UNESCO-listed city holds a foreign passport, and it’s been that way since the ’30s and ’40s.

For accommodations, SMA has a wealth of options. For example, you can rent a mansion by the week that sleeps 12 or more from Casas Elegantes, choose from a variety of B&Bs, or perhaps stay at the elegant Casa Sierra Nevada (be sure to have a Don Julio Reposado tequila in their bar).

Once in SMA there are endless things to do. Wonderful restaurants abound. At random I can recall good times at El Pegaso, Berlin, Café Etc., Olé Olé, Hecho en México, and The Restaurant (often cited as the best).

Take in the music and cocktails at La Malinche. See if Doc is in town. Go on the Sunday morning House and Garden Tour sponsored by the Biblioteca. Stroll the arts and crafts shops at the Fabrica Aurora. Sign up for a Spanish language class at any number of schools (Academia Hispano Americana, Habla Ispana, Warren Hardy, and others). Take an art or photography class at the Instituto Allende. Visit the nearby “ghost town” and artist enclave of Pozos. And be sure to check out the Charco del Ingenio, a vast nature reserve and favorite with bird watchers.

If arriving by air, you’ll probably land at the airport in Leon, which is an hour-long BajioGo Shuttle ride from San Miguel. 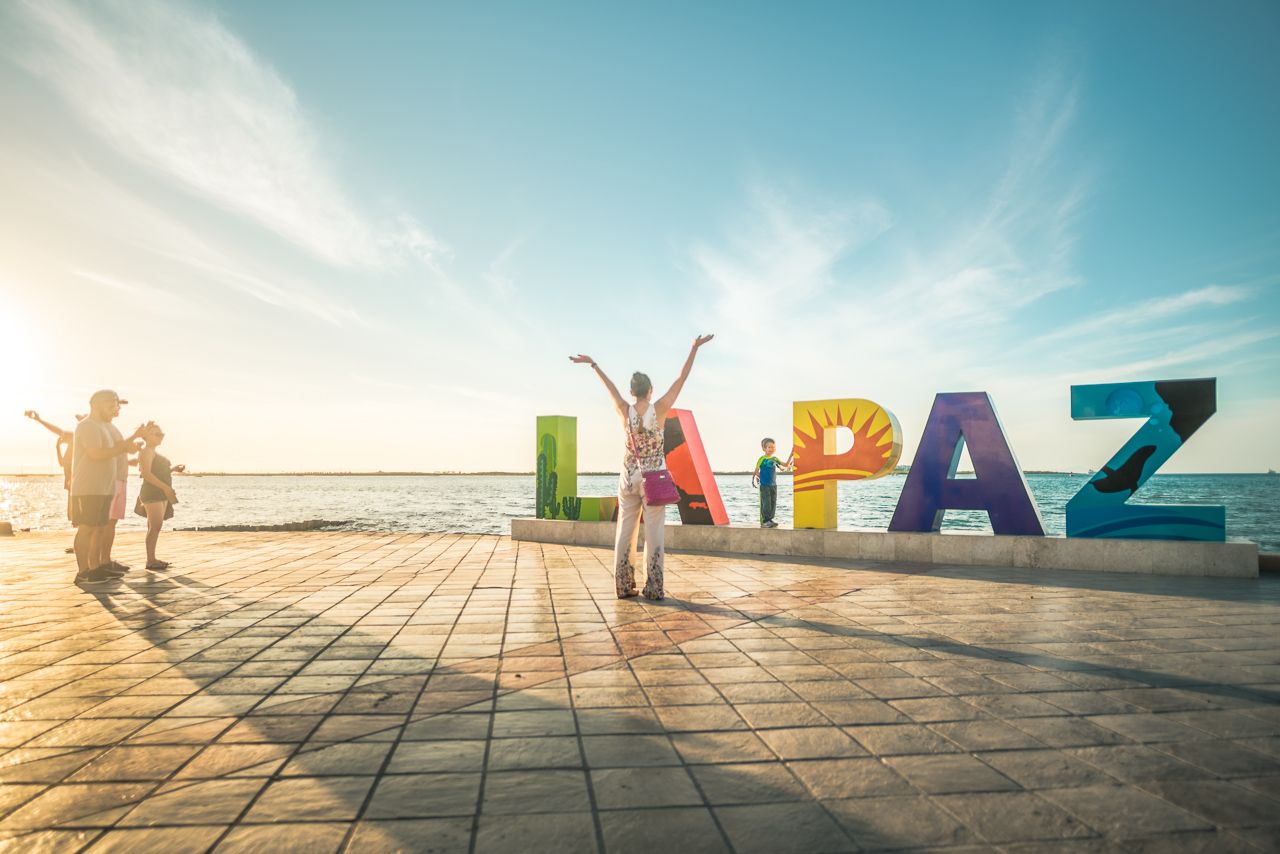 Road tripping the Baja Peninsula from top to bottom is still a popular travel option, though it can’t be ignored that the state of Baja California (the top half of the peninsula) has been one of the flashpoints of Calderon’s drug war. Baja California Sur (the bottom half), on the other hand, remains one of the safest states in the country.

At Baja’s tip is the resort town and expat stronghold of Cabo San Lucas. For something less gringo-fied, check out the state capital of La Paz, located 130 miles north of Cabo on a bay of the Sea of Cortes. This is where the international airport is anyway, making it easily accessible for US non-road trippers. You can also get to La Paz by ferry from Mexican Riviera ports like Mazatlan.

Tourist presence is generally confined to the first few streets paralleling El Malecon, the beachfront avenue, earning La Paz the “authentic” stamp from most travel bloggers, including Barbara Weibel of Hole in the Donut:

Although there are many American and Canadian expats here, La Paz has retained its charm and culture. At its core, the Cathedral of Our Lady of La Paz watches over Velasco Garden, where men have their shoes shined and mothers treat their children to helados – frozen desserts sold by push-cart vendors…

I encountered no salesmen hawking timeshare sales and no boat captains pushing glass-bottom boat rides. Indeed, I want to go to Espiritu Santu Island to swim with the sea lions while I am here, and it took me all day to find a tour operator through which I could book the trip.

For a story about sailing around the Bay of La Paz and surrounding islands, check out Matador member Daniel Fox’s blog post Sailing Matilda. 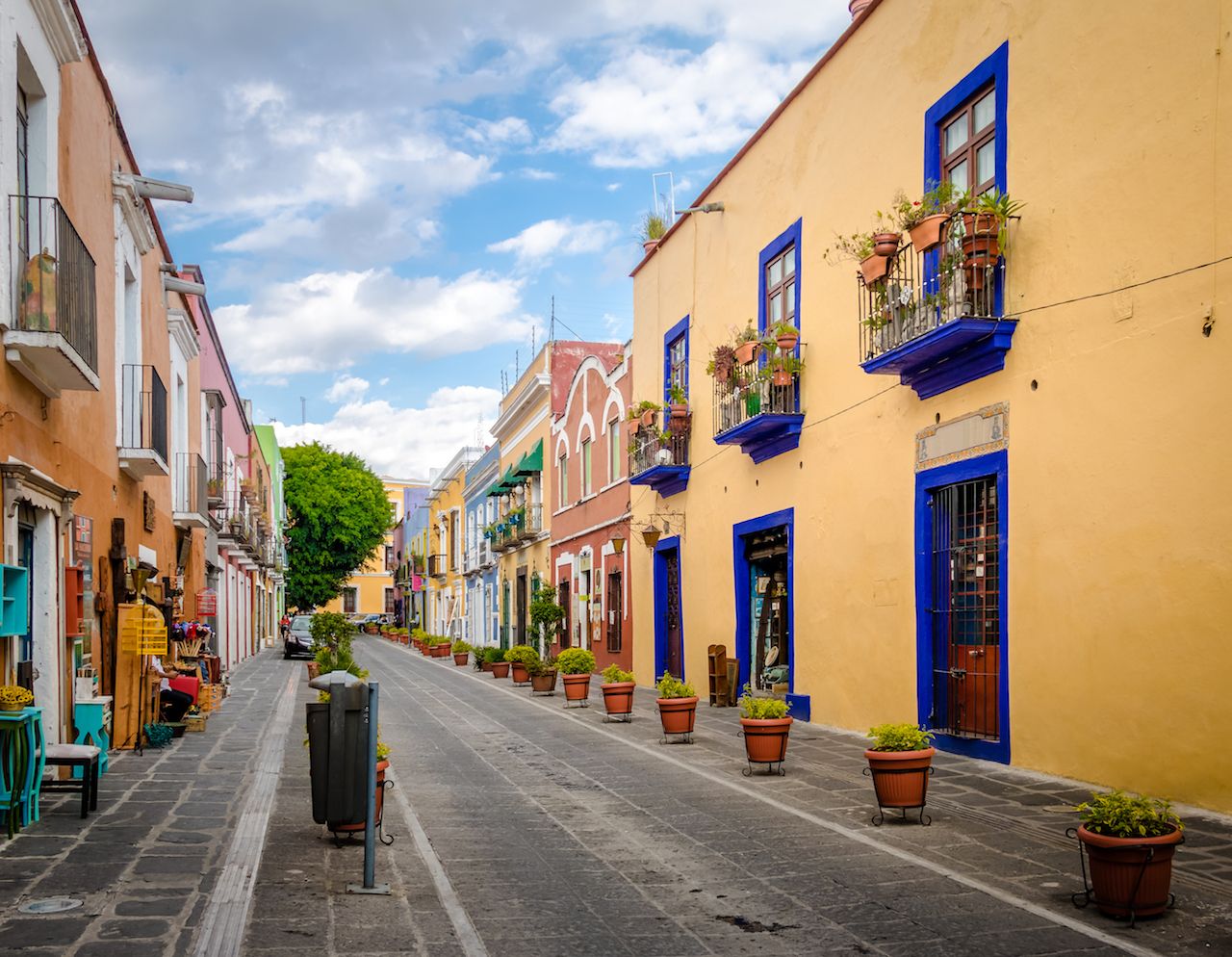 Despite its size and robust industrial sector, it’s managed to hold on to a lot of its history — pre-Hispanic, colonial, and Mexican.

It’s this history that Rebecca Smith Hurd, Puebla resident and editor of All About Puebla, finds most intriguing, reflected here in her top travel recommendation:

The capital city is not only the site where Mexico’s famous victory over the French took place — giving people a reason to celebrate Cinco de Mayo — but also the birthplace of the Mexican Revolution of 1910. It was here, in a Colonial mansion downtown, that Aquiles Serdán and his family stockpiled weapons for the fight against President Porfirio Díaz. On November 18, two days before the revolt was officially scheduled to begin, authorities learned of the stash and surrounded the building. A bloody stand-off ensued.

Two other things you probably won’t miss on a visit two Puebla: volcanoes and food.

Iztaccihuatl and Popocatepetl, standing snow-capped at 17,160ft and 17,802ft, respectively, are just 25 miles from downtown, making a pretty sweet backdrop for the city’s many church towers.

And Puebla is said to be the original home of mole poblano, one of the most iconic of Mexican dishes.