OUR GUIDE LOOKED UP at us from his stack of maps and pamphlets and said with a hint of a pride, “It’s considered one of the longest upward slopes in Norway.” It was dusk. The three of us were sitting in the lobby of our hotel in Loen, the plans for the following day hanging heavy over our heads. “Sixteen kilometers round trip, with a change in altitude from sea level to over 1,800 meters.” He traced the path on our map.

Skåla sounded hard, but after a few days exploring Fjord Norway’s terrain by car, the idea of stretching our legs to summit a mountain, combined with the prospect of the incredible views we’d see along the way, seemed to outweigh the time and physical effort it would take to reach the top. So the next morning Kate and I made sandwiches, bought 4 liters of water, rationed our camera gear, and set off.

Yep, the trail was steep — not unlike some of those hills in San Francisco where the sidewalks turn into stairs. But instead of slanted houses and tourists in fanny packs, you’re surrounded by slanted, glacier-carved mountains and grazing sheep with bell collars, and the beautiful vistas provided distraction from the work it took to keep moving forward. 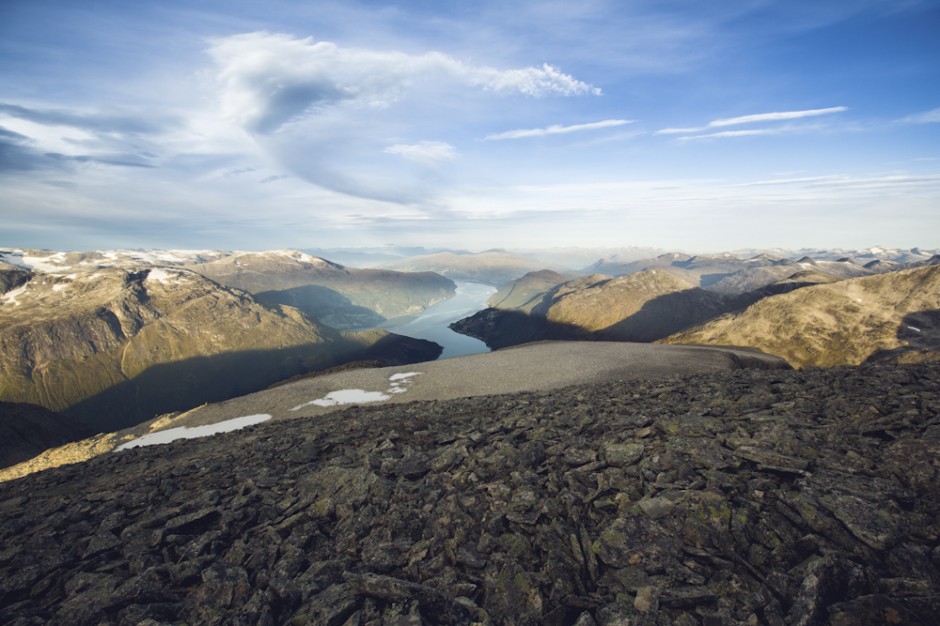 This is what awaited us...but I'm getting ahead of myself. 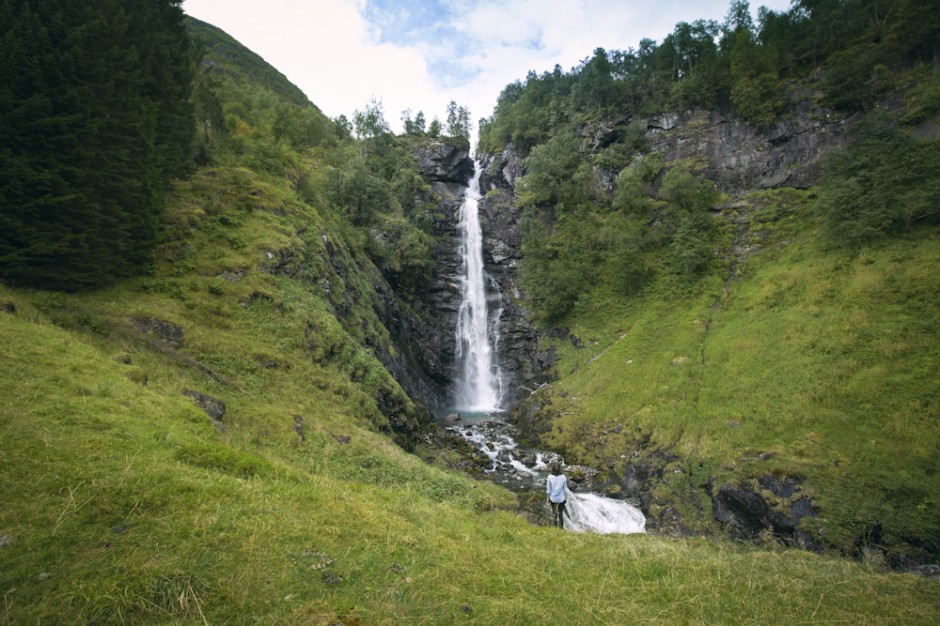 Each kilometer was unique, with characteristics that varied with the altitude. By Km 2, we were shocked to find ourselves standing in a grassy clearing cut in half by a giant waterfall, something both our guide and reading materials had not cared to mention. With so many in the region, I guess waterfalls are considered commonplace. Our legs were warmed up by this point, so this was a nice place to break for a moment and take a sip of water while admiring the view. 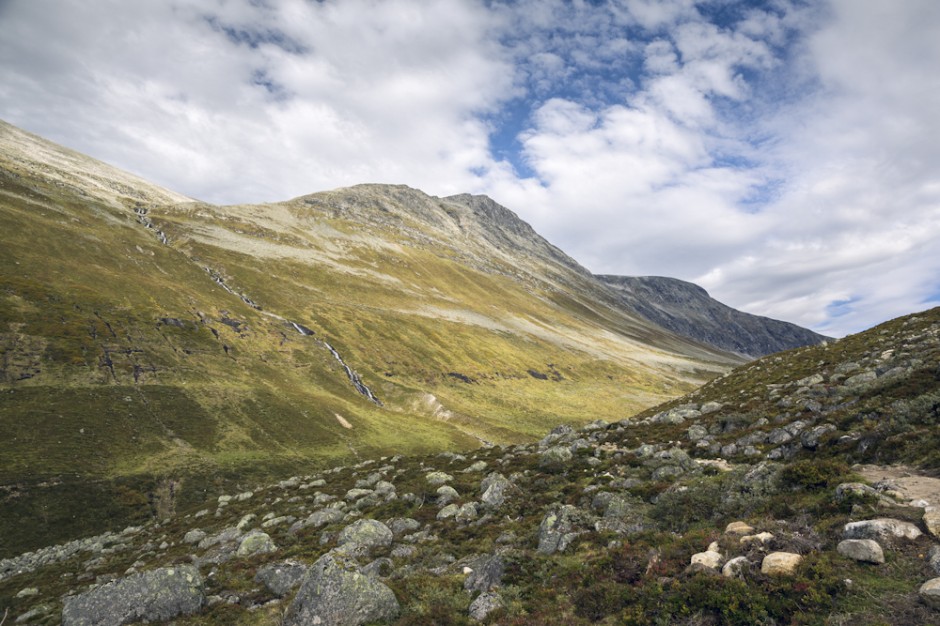 We broke through the treeline by Km 4, where the landscape opens up and you begin to appreciate how high you are.

HikingTroll’s Tongue, Fjord Norway: Is This the Sickest View on the Planet? 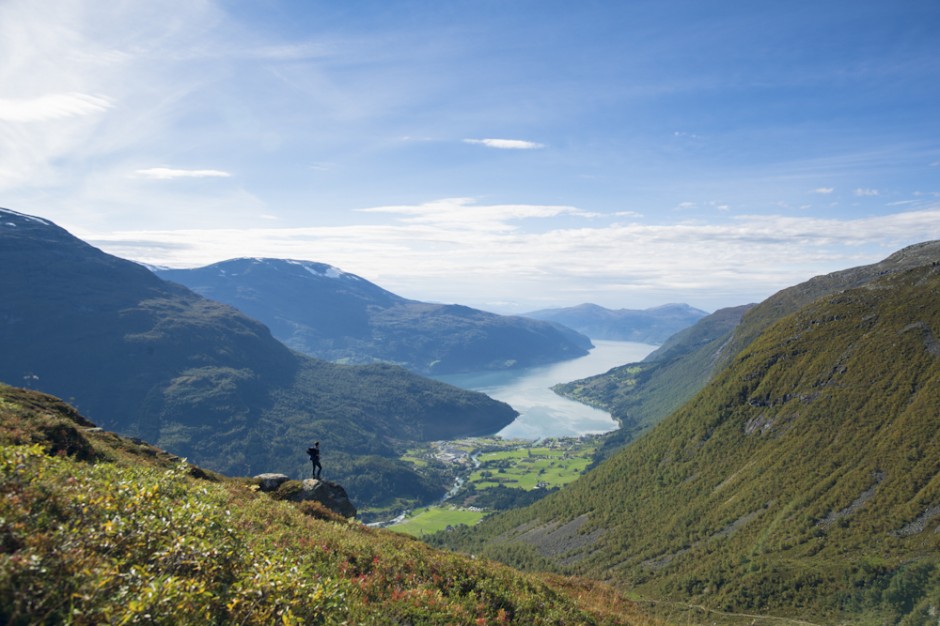 Back to the beginning

The view from Km 4 overlooking the town of Loen, where the trail begins at sea level. Loen already looked absolutely minuscule, cupped between the mountains and the sea, and the clouds were drifting faster in the afternoon wind. Halfway there, and two things were clear: The view was only getting better, and there was no way were were going to make it back down before dark. 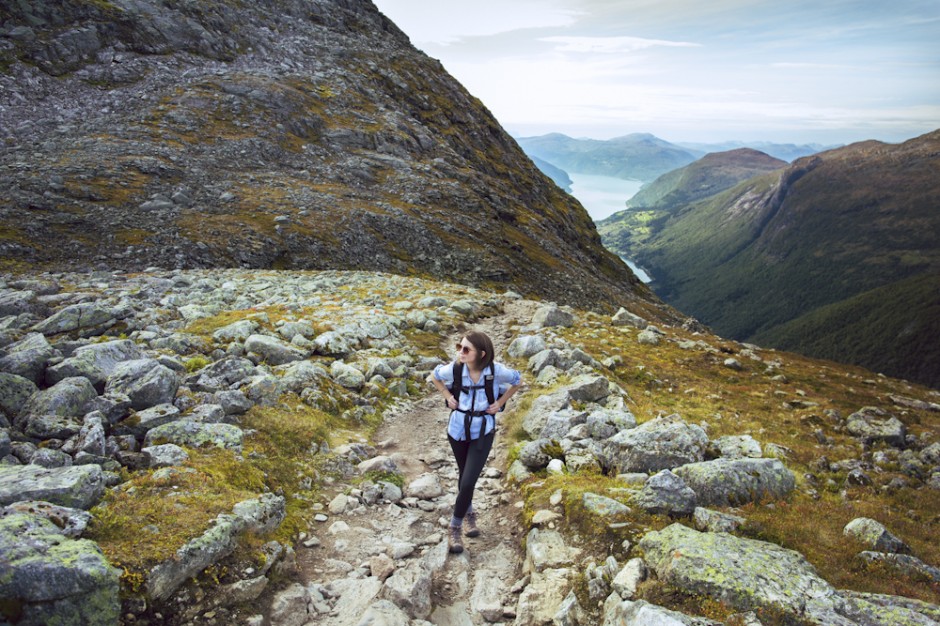 Kate en route, leaving the greenery behind as we crossed into higher altitudes. The herds of sheep thinned out near Km 5, where the grass turns to stone, the temperature drops, and the river that feeds the waterfall is a mere trickle. The air was thin and quiet, save for our footfalls and heavy breathing. 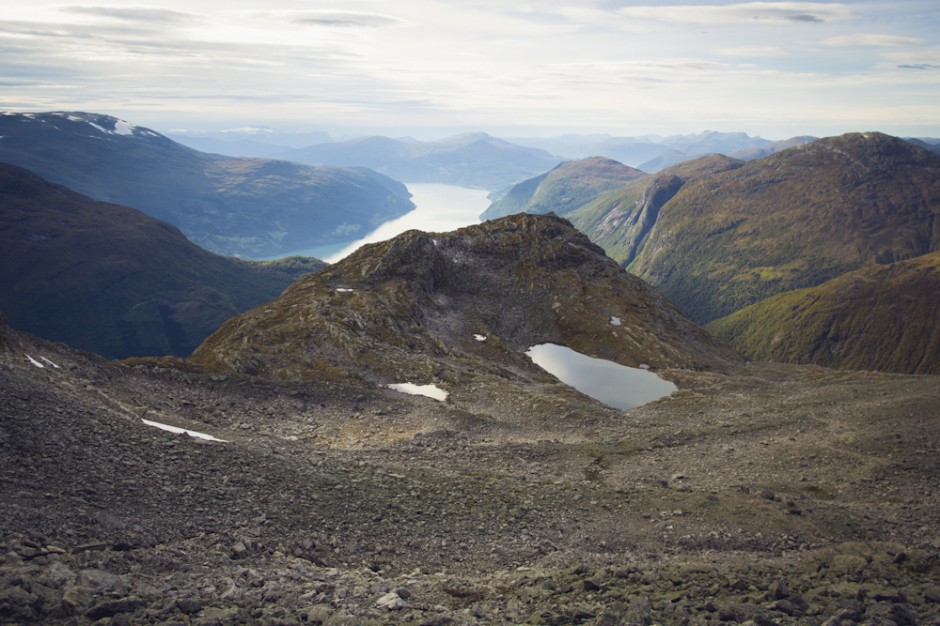 We had to stop more often near the top to rest and document each new and equally epic segment of the journey. Glacial water collects near the top as tiny streams are ﬁltered through the rocks. A great way to stay hydrated. By the way, 20 pounds of photo gear -- the worst idea and the best idea at the same time. Our shoulders were aching terribly and we were clearly exhausted, but what happened next made all that pain fade away with enough adrenaline to last the night. We will never forget Km 7. 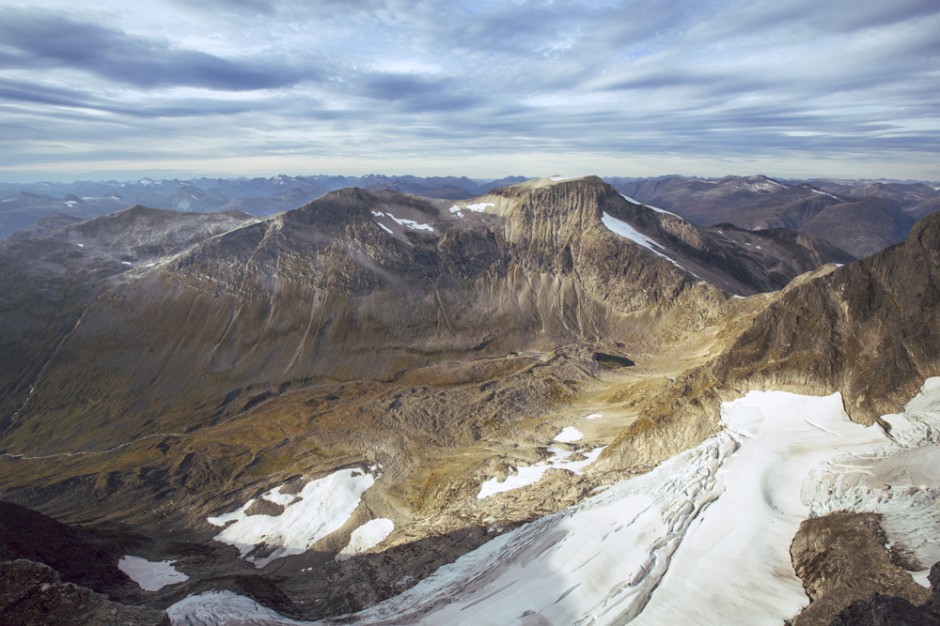 It sounded funny coming from my mouth. Up until that moment, I'd never uttered that word in a sincere way, maybe only as a kid while playing outside to mimic how I'd heard it in the movies. But this time, it was real. The mountainside in the distance collapsed and started flowing like water, where a giant glacier meets a 1,200-meter drop. Kate stopped mid-step, looked at me curiously, then turned to where I was pointing as the sound hit us -- this low, deep rumble you can feel in your chest. Imagine the sound of 500 city buses crashing down a mountain and you'll have an idea how incredible and bone rattling it was. This wasn't us sitting at home watching the Discovery Channel. This wasn't triggered as a preventive measure. This was really happening, as it has for millions of years. In that moment, nature decided to execute a show of force, and we were the only two humans in the world witnessing it. This avalanche was ours. I bet the sheep didn't care. 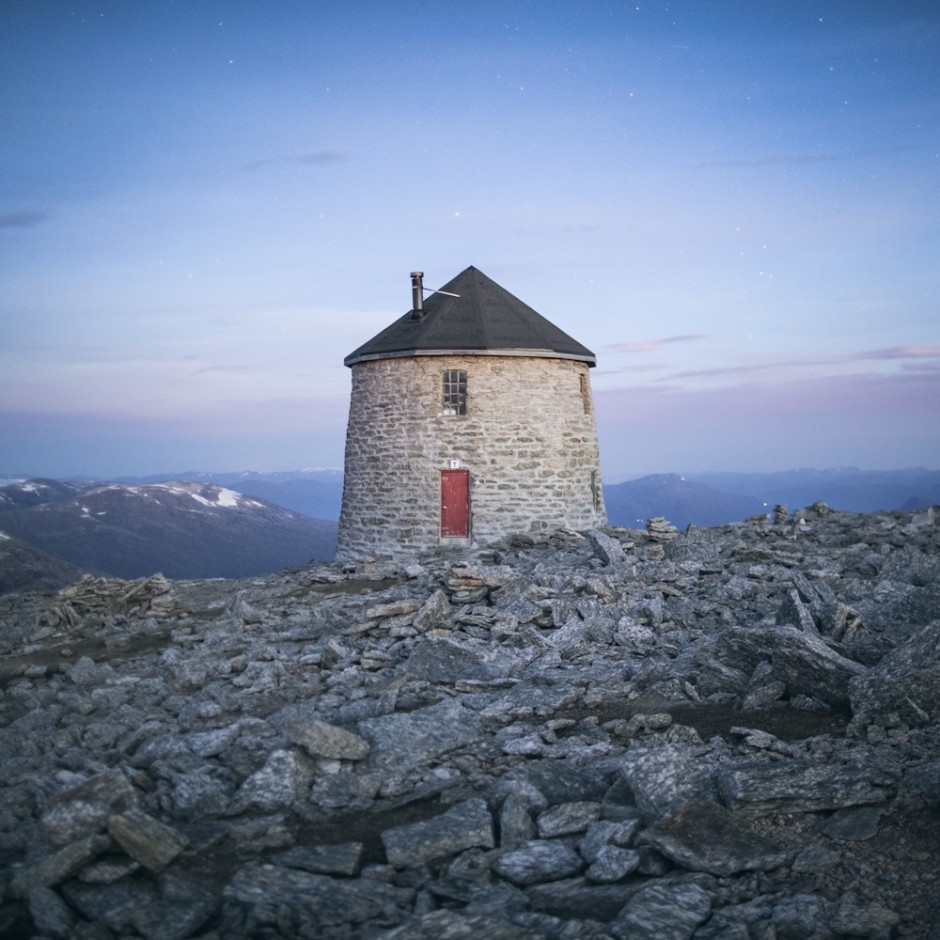 Finally. We came down from our avalanche high as we reached the peak, greeted by panoramic views, sunset, and a rustic-looking cabin built from the surrounding stone. Originally constructed in 1891 as a retreat for tuberculosis patients, it ended up being opened to the general public after it was realized most people with tuberculosis weren’t in the best shape to hike 5 miles up a steep mountain. With room to sleep 22 hikers, that night it was ours, and in a word, charming. We pried off our shoes, built a fire, lit candles, boiled snow for water, scribbled our names in the logbook, and rested. In the morning, we’d have to do it all over again. 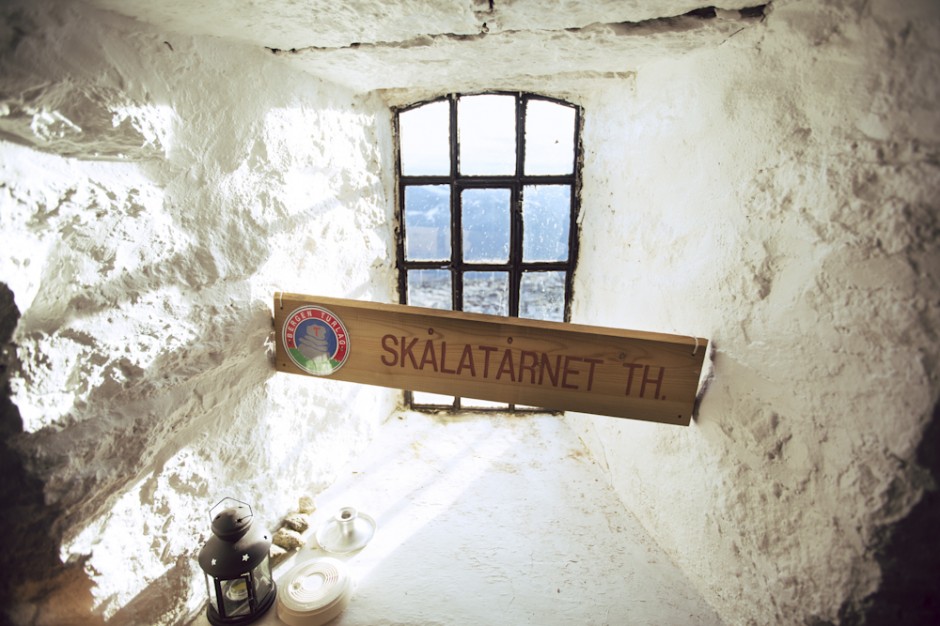 Sun setting through the windows of the stone cabin at the top, our room for the night. 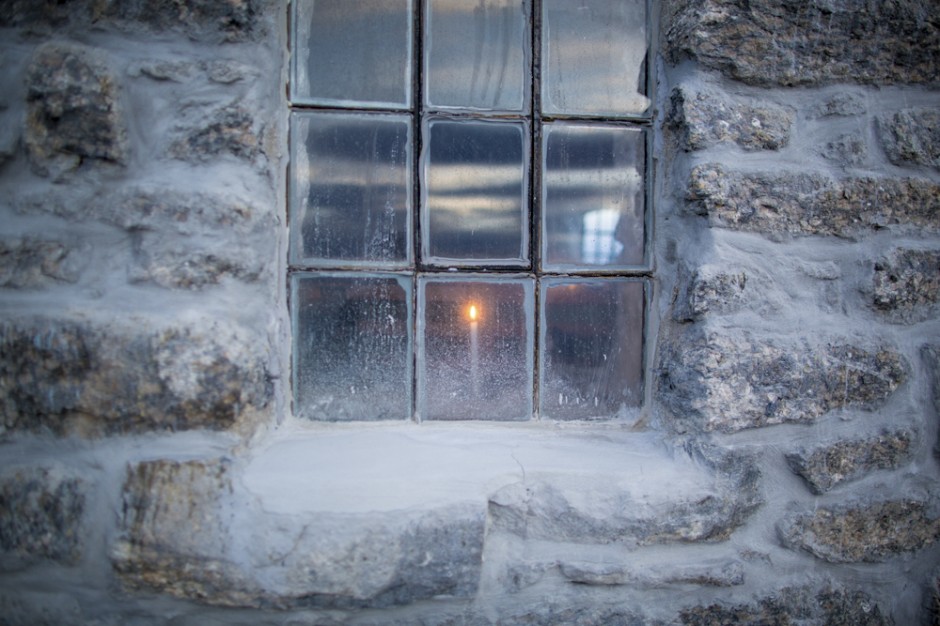 A lone candle seen from outside at twilight. Lighting a ﬁre proved difficult in the thin air. 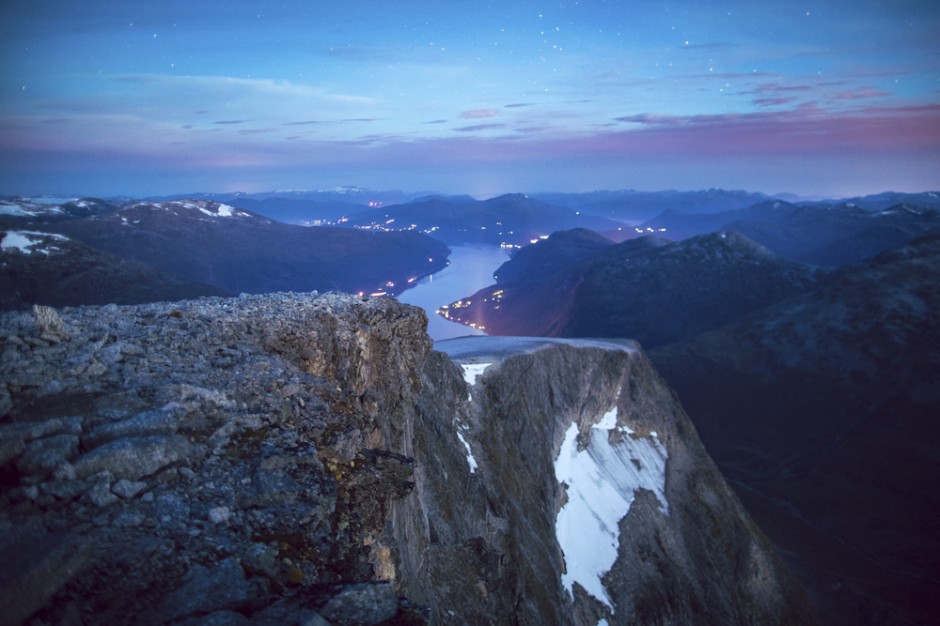 I balanced the tripod at the edge of a steep, windy cliff to capture Loen at rest. 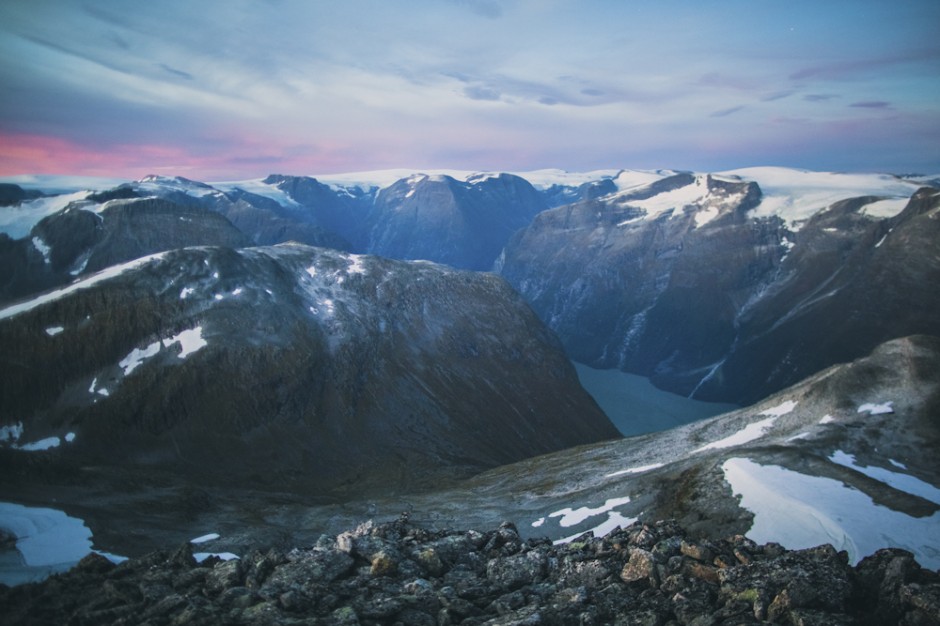 The next morning, looking south as the light got brighter. 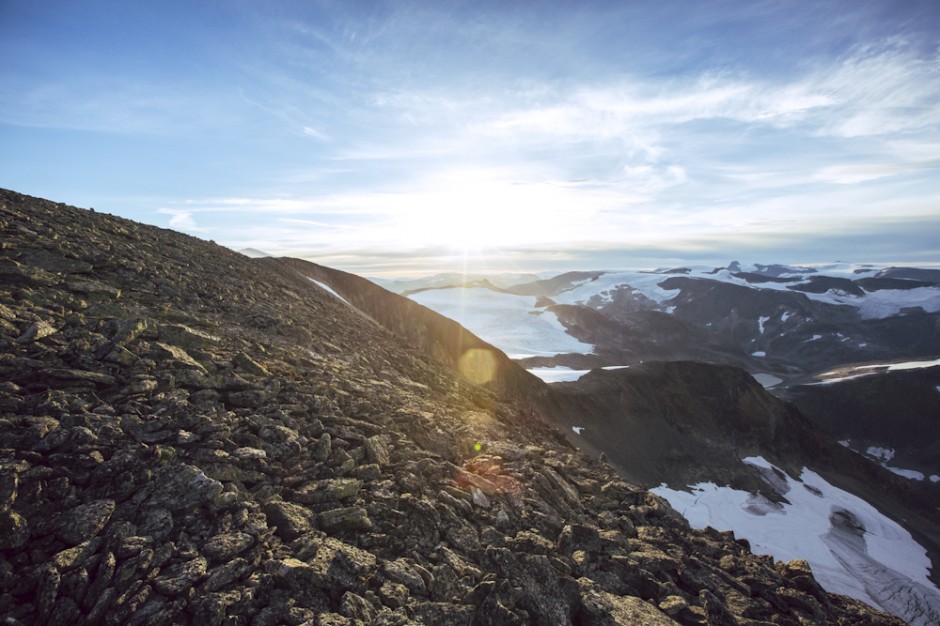 The sun breaks over the summit. Time for the second half of this incredible hike.

This post is proudly produced in partnership with Fjord Norway.
Tagged
Hiking Insider Guides Norway Fjord Norway: In Motion
What did you think of this story?
Meh
Good
Awesome
✖
travelstoke
Download the mobile app
stoked by