11. It’s best to just not bring up the huge rocket hotel in the middle of Pyongyang. 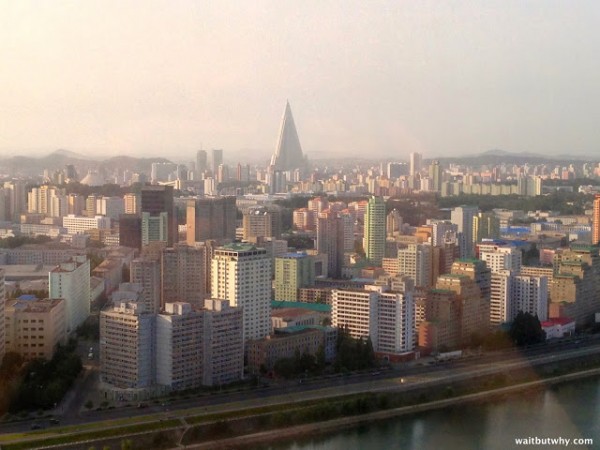 The 105-story Ryugyong Hotel, which was started in 1987 and still hasn’t been finished, would seem to be an odd undertaking for a nation whose economy had stagnated, whose infrastructure was rotting, and which looks like this at night.

But we’re in North Korea, so why the fuck not.

It’s hard to understand from pictures how weird it is that this building is sitting there in the middle of Pyongyang, a city whose other buildings are all small, shabby concrete blocks from the Soviet Era. The picture below shows a typical Pyongyang building in front of the Ryugyong. 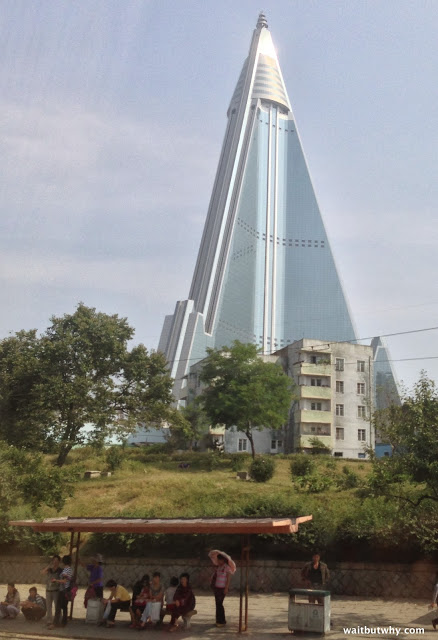 12. North Koreans seem to be lacking a sense of humor about the mausoleum that holds the bodies of Kim Il Sung and Kim Jong Il. 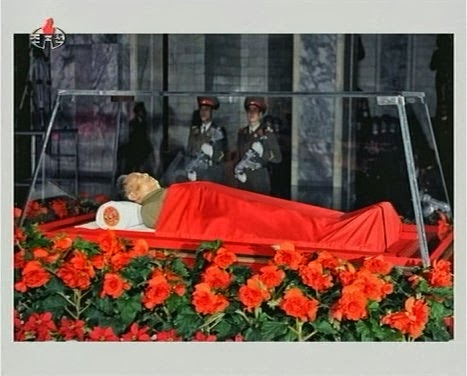 Here’s what our old buddy Kim Jong Il is up to these days.

This is the one picture in this post that I did not take — cameras were strictly forbidden in the mausoleum, otherwise known as the Kumsusan Palace of the Sun, which experts say cost somewhere between $100 and $900 million to build.

On a visit with many tense moments, the time I spent in here was the tensest. We had to walk single file in and out and bow three times to each of the two bros.

13. North Korea even manages to have dictator-esque traffic ladies.

Kind of mesmerizing to watch.

14. The Mass Games are both breathtaking and disturbing.

Let’s start with breathtaking. Attending the Mass Games was like attending the opening ceremony of the Olympics. It involves 100,000 (!) performers, many of them young children, depicting the glorious history and thriving modernity of North Korea. The backdrop is a stunning tapestry made of 20,000 kids holding up large colored cards (they have a book of cards and can quickly flip from color to color). I don’t throw the word magnificent around very often, and it was magnificent. The Mass Games take place four days a week for three months every summer.

For the disturbing part, just say the sentence, “North Korea is one of the world’s poorest countries, a place where millions of people are starving, hospitals no longer function, and there is almost no electricity,” and then read the above paragraph again.

In any case the Mass Games are the perfect North Korean event — centered on propaganda, stressing the collective over the individual, and making no sense as a priority given the state of things.

You can see pictures here, and here’s a video I took which shows a sampling of the show.

15. No North Korean people have access to the internet because the government is concerned that people would see things that would make them feel unfairly critical towards the West, and the government would like to protect the West’s reputation by preventing the people from going on the internet.

Yup. That is the story I was told when I asked our North Korean guide why no one can go on the internet. One of the most absurd explanations for anything — apparently the government isn’t even trying to lie credibly anymore.

What the (most privileged) people do have access to is the North Korean intRAnet, a network limited to government-approved North Korean websites.

I saw it myself. After seeing his dead body hanging out in the mausoleum, they took us downstairs to a Kim Jong Il museum, which contained awards and honors he had been given throughout his life, a huge animated map showing every route he traveled in his life, and the train he used hundreds of times during this travel (he was scared of flying).

They showed us the inside of the cart, including the room he (supposedly) died in. In it, there was a change of his favorite outfit and, on the desk, a MacBook Pro.

Weird to picture Kim Jong Il putting things in his dock, minimizing windows, and opening his Finder, but that’s what happened.

17. Most of the time people walked together, I swear they were walking in step.

18. North Korea is the one place where the museum of ancient times sounds like the good old days.

Normally, going to a museum of any country’s ancient times makes you think, “Thank god I don’t live then.” Whether it’s hearts getting cut out in Mexico, public executions and the Black Death in Europe, or brutal totalitarian empires in Asia, it tends to be a lot better to live “now” than “then.”

But in North Korea, as I was hearing the guide tell story after story of ancient dynasties ruling the peninsula, my thought continued to be, “Eh, still sounds better than living here now.”

19. Apparently the tears in this video are actually real.

Okay, I’m not sure if they’re all real, or if some people are crying because if they don’t they’ll be sent to a labor camp for the rest of their lives. But I had assumed they were basically all faking that level of emotion, an assumption that was debunked when I heard this story:

A New Zealander who worked for the tour company that arranged my tour told me that he was meeting with an employee of the North Korean government’s tourism agency outside North Korea (one of the rare times you’ll ever see a North Korean outside the country), when the news of Kim Jong Il’s death came in. He said the man, at the time, was trying to sign something with a pen, and that his hand was shaking so violently that he couldn’t do it. The man then tore away to the other room and emerged a couple hours later, face swollen and eyes red. This was a man outside of North Korea with no reason to fake emotion.

A brutal, heartless totalitarian dictator has to play quite the mind trick on his people to be truly beloved — the Kims are good at what they do.

20. It turns out there’s a place in the world that will make you enter China and think, “Thank god for this land of boundless freedom!” 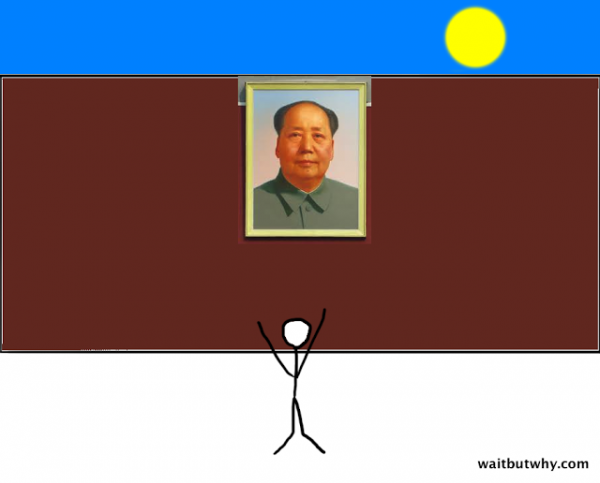 North Korea. A place unlike any other.

Prev Page
Tagged
North Korea
What did you think of this story?
Meh
Good
Awesome

Southwest Passenger Creates a Fake Person To Keep Anyone From Sitting Next To Him
Avoid This Dangerously Windy Wyoming Highway at All Costs on Your Next Road Trip
This Adults-Only, All-Inclusive Resort in the Dominican Republic Is the Epitome of Luxurious Wellness
3 Mysteries Archaeologists Still Haven’t Figured Out About Ancient Egypt’s Pyramids
Vegas Is Getting a 24-Hour Bacon Restaurant Where Bacon Replaces Sandwich Bread