WHETHER YOU’VE BEEN to New Mexico or not, you likely have a sense of its beauty. Red rocks, starry desert skies, the works. But if you haven’t been, what you probably don’t realize is that this is the home of the true American story, going back millennia. Ancient supervolcanoes. Petrified riverbeds. Some of the oldest inhabited places on the continent.

To truly dive into the diverse story that New Mexico tells, it’s best to see it in person. Until then, you can use these images to start planning your own road trip of a lifetime through the Land of Enchantment. 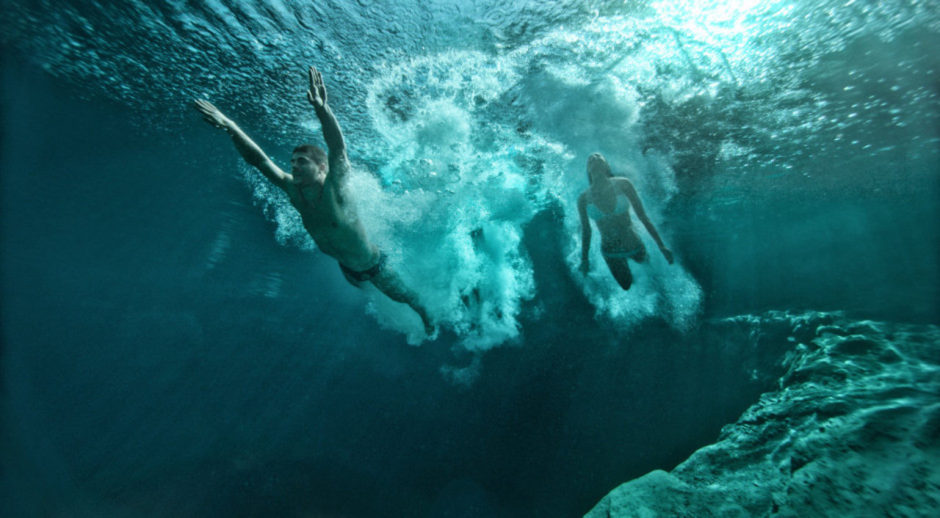 One of the most unexpected and scenic swimming holes you'll ever come across, the Blue Hole is also a popular training spot for SCUBA divers. Consider it one of the many facts about New Mexico you never would have guessed.
Photo courtesy of New Mexico Tourism Department

The largest hot air balloon festival in the world, this nine-day celebration puts over hundreds of balloons into the air every year. Witnessing the "mass ascension" of these colorful orbs is something you really have to experience in person, and is certainly a New Mexico cultural event you don't want to miss.
Photo: Eric Ward 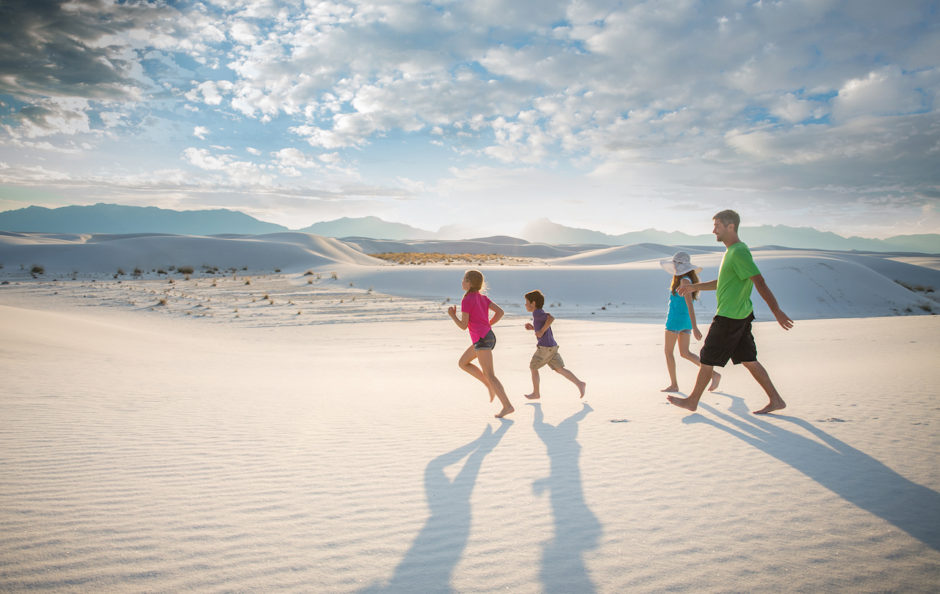 White Sands is one of those places you've got to see to believe. It's 275 square miles of desert, and by "desert" we mean pristine gypsum dunes, sometimes piling hundreds of feet high, all untarnished and unlike any other landscape—and any experience—in the world.
Photo courtesy of New Mexico Tourism Department 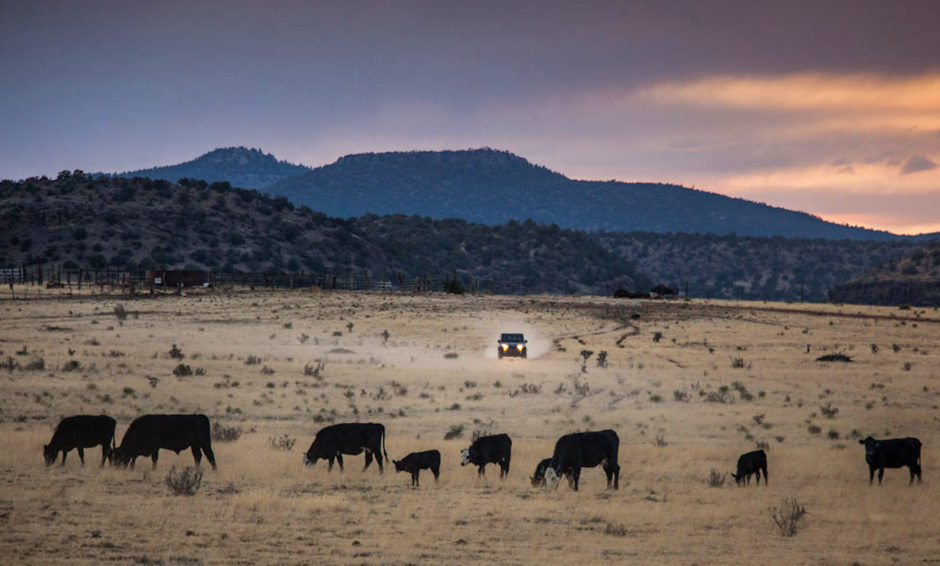 Lincoln National Forest is more than just beautiful wilderness—it's also the birthplace of Smokey Bear. Its more than one million acres houses the National Solar Observatory, aptly located in the village of Sunspot.
Photo courtesy of New Mexico Tourism Department

The oldest capital in the States and the oldest city in New Mexico, Santa Fe was founded in 1610 as "La Villa Real de la Santa Fe de San Francisco de Asís." However, human history here dates back to at least 900 AD. The city's architecture creates a vibe you won't find anywhere else in the US—it's also home to some of the state's best art destinations.
Photo: R.H. Baumgartner 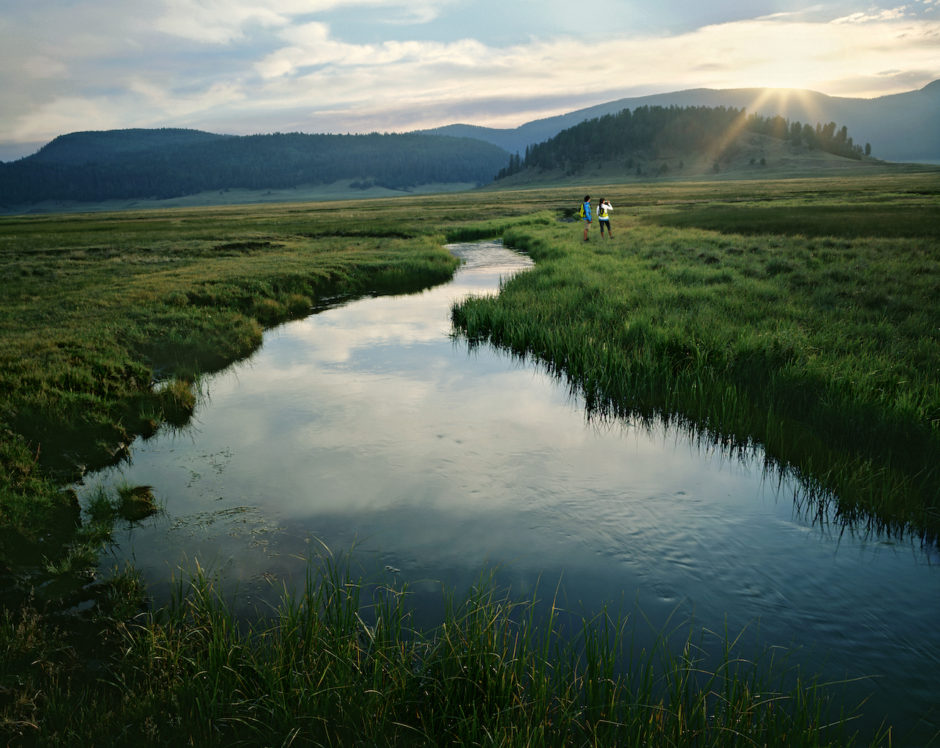 Valles Caldera is wide-open wilderness full of mountain meadows, wildlife, and bountiful streams. There are miles and miles of hiking, equestrian, and bike trails for the warmer months, and cross-country skiing opportunities to be had in winter. It's one of those places that just compels you to get outdoors.
Photo courtesy of New Mexico Tourism Department 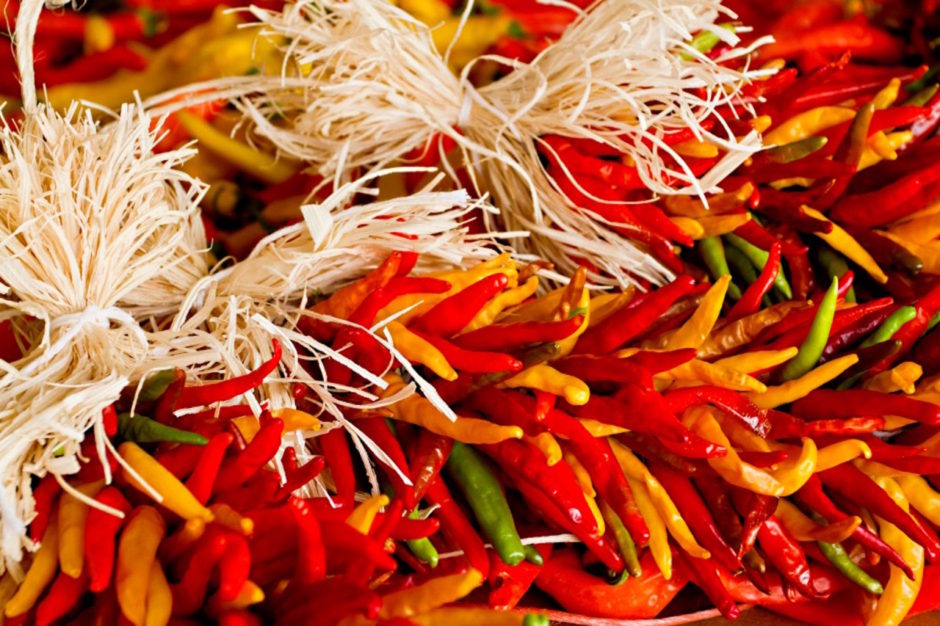 Welcome to the chile capital of the world. And if you happen to be here around Labor Day, welcome to one spicy festival. For two days, tens of thousands of people celebrate (and sometimes ignite) their tastebuds in both incredibly traditional and out-of-the-box ways. Come find out just what makes chile so iconically New Mexican.
Photo courtesy of New Mexico Tourism Department

Read more: 12 food and drink experiences to have in New Mexico before you die

Long, long ago, New Mexico was the site of a supervolcano. When that volcano erupted, it left in its place Valles Caldera. Millions of years later, that caldera is now sustaining life (and still the occasional hot spring) and is one incredible place to explore.
Photo: Larry Lamsa 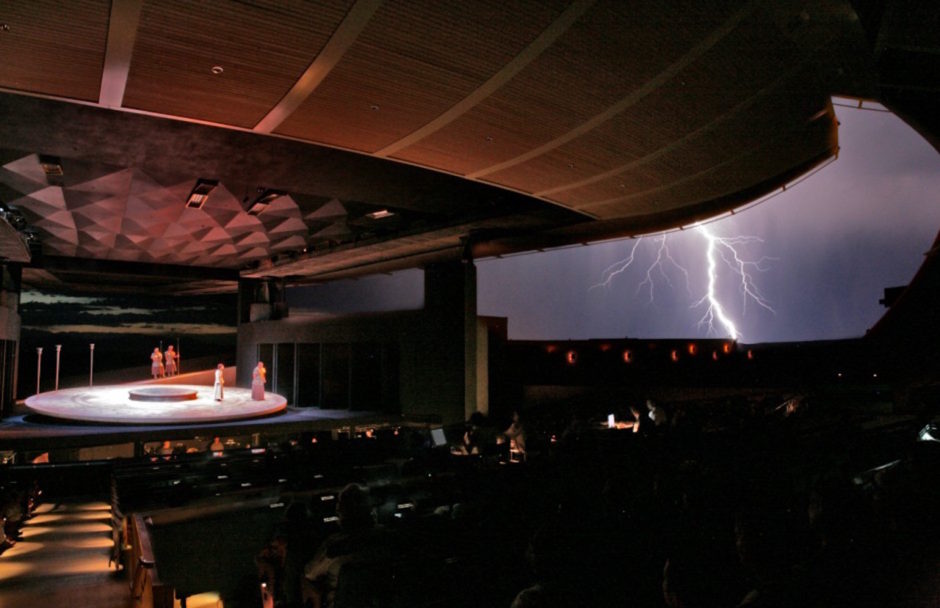 The Santa Fe Opera has been running strong since 1957, and in that time has produced hundreds of shows and even commissioned ten new operas (and 55 premieres). Visitors can get their fix at a performance in the opera house (which, as you can see above, is not your typical stuffy theater building) or take a free backstage tour on Saturdays.
Photo courtesy of New Mexico Tourism Department

The most prominent landmark in northwestern New Mexico, Shiprock rises to 7,177 feet on the land of the Navajo Nation. It's said its name was chosen because of its resemblance to 19th-century clipper ships.
Photo: Todd Shoemake 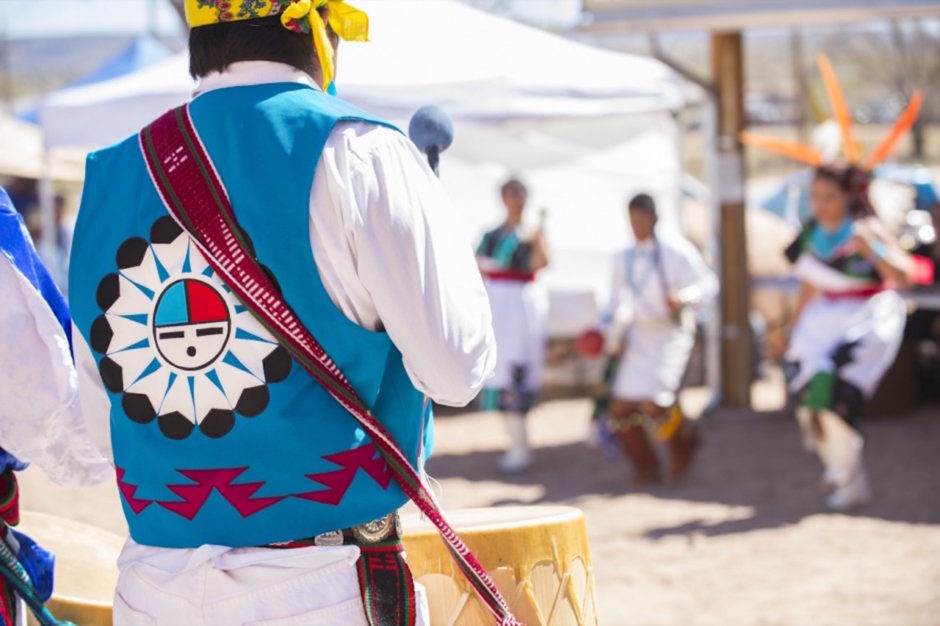 There are 19 New Mexico Pueblos. Zuni is the largest, and its people have held onto their unique language, culture, and history—many are active artists, preserving local traditions. On the last weekend in July, check out the Zuni Arts and Cultural Expo, which showcases their work.
Photo courtesy of New Mexico Tourism Department

This is desert hiking at its finest. Hit up the Seismosaurus Trail (if for nothing but the name alone), and spend your day between hoodoos, box canyons, meandering arroyos, rocky terraces, and stripes of multi-colored shale, sand, and limestone.
Photo: John Fowler 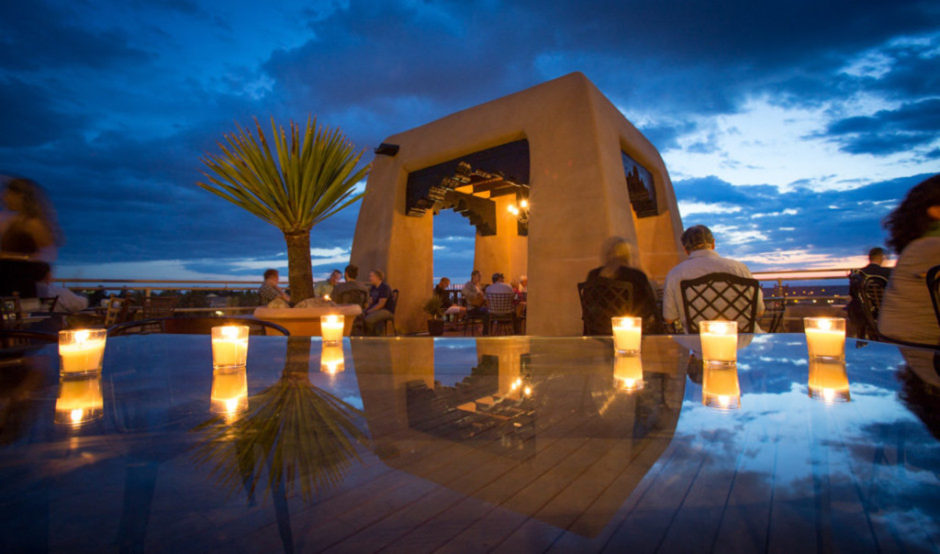 La Fonda on the Plaza sits right on the edge of Santa Fe's central square—the only hotel on the plaza. The modern iteration of this historic lodging opened in 1922 and is decorated with hand-painted furniture and original local artwork. On the fifth floor is the Bell Tower Bar (pictured above), with unparalleled views out over the city.
Photo courtesy of New Mexico Tourism Department

Route 66 once crossed New Mexico east to west in regal fashion. Much of it is now part of the Route 66 National Scenic Byway, and most of its 604 miles can still be explored today.
Photo: Mobilus in Mobili 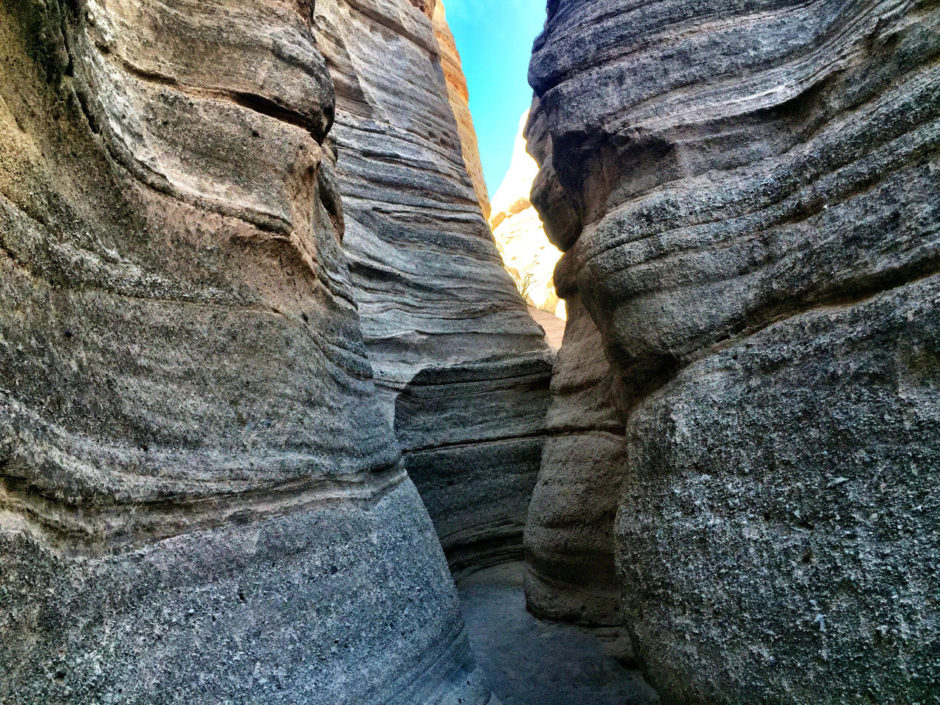 40 miles southwest of Santa Fe, this monument is an easy and fun day trip for. Only open during the daytime, the way to check out these rocks is to walk the 1.2-mile trail (through a slot canyon) to a lookout, viewing the tent rocks from above.
Photo courtesy of New Mexico Tourism

When it comes to birdwatching, few places are more fascinating than Bosque del Apache. 377 species have been documented in the area, most notably the gargantuan flocks of cranes and geese that winter here. It's such a sight to see that around Thanksgiving, when the birds start flying in, the Festival of the Cranes is held, peaking in the golden hours of sunset.
Photo: John Fowler

Running from southern Colorado to just southeast of Santa Fe, the Sangre de Cristo Mountains top out over 13,000 feet several times in the New Mexico skies. The name, "Blood of Christ" in Spanish, may refer to the reddish glow that sets on the mountains as the sun falls below the horizon.
Photo: Eugene Kim 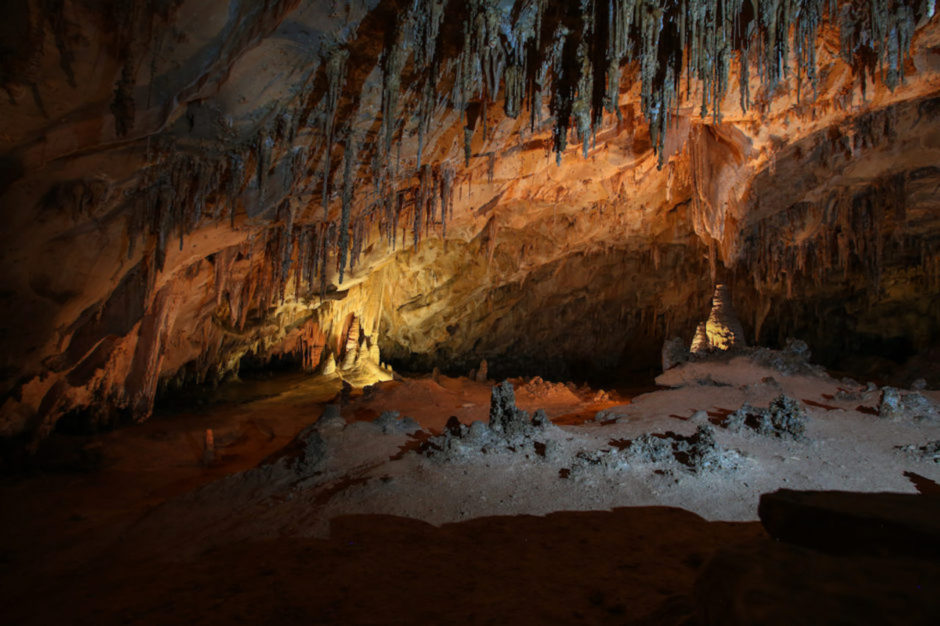 "The Big Room," the largest cave chamber in this national park, is 4,000 feet long and over 250 feet high. You can take the natural entrance, but there's also elevators to avoid the climb. Our tip: Take the natural entrance in and the elevators out, saving your energy for the above-ground hiking trails.
Photo courtesy of New Mexico Tourism Department 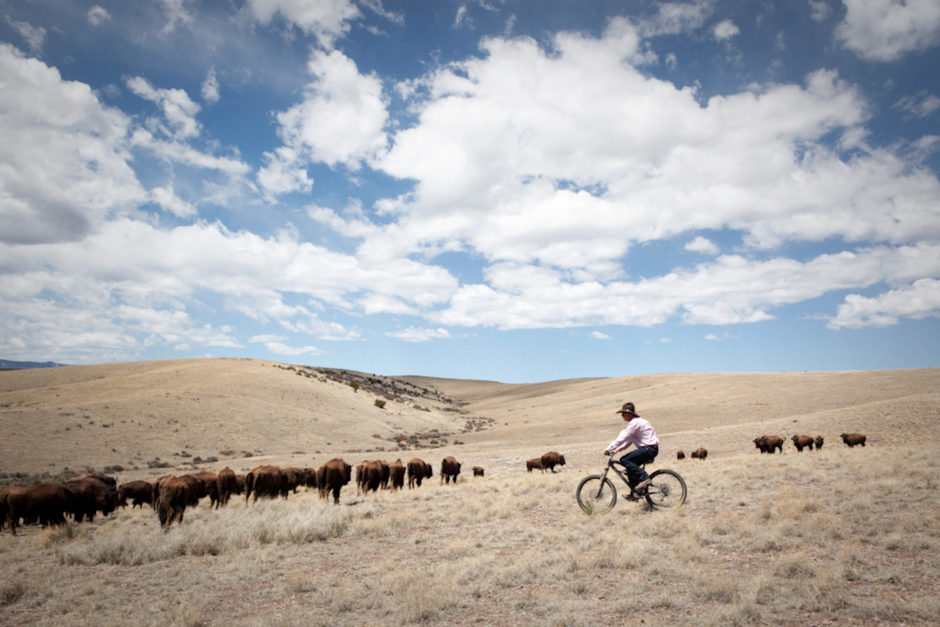 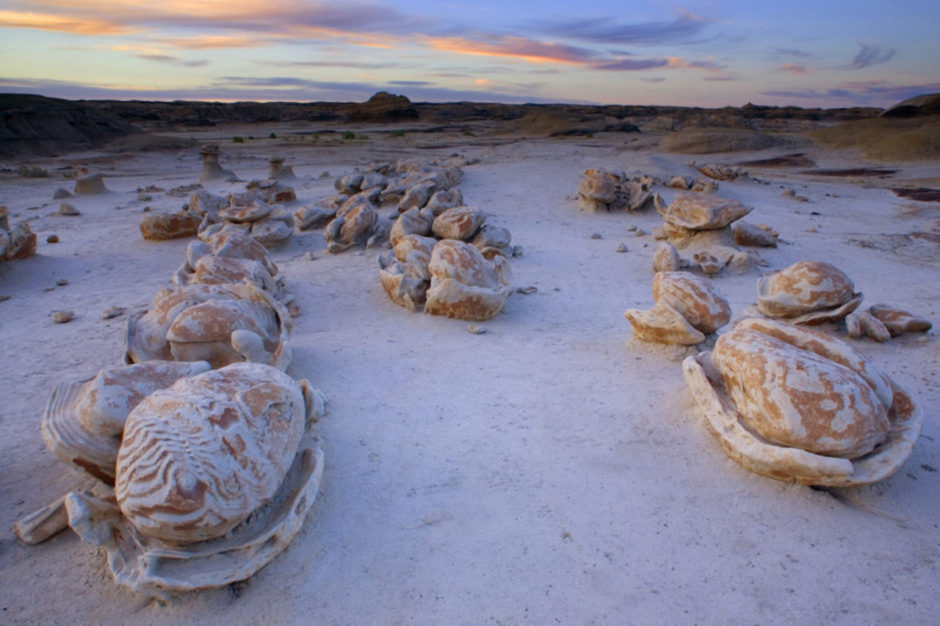 Hard to believe, but this area was a river delta about 70 million years ago. Fast forward to today, and you have an ancient burial ground of fossils and petrified wood, of red, black, gray, and purple sand and stones, all begging to be explored.
Photo courtesy of New Mexico Tourism Department

When Bandelier is in bloom, it doesn't even need any other claim to fame. But its designation as a national monument has nothing to do with the local flora and fauna—it was set aside in 1916 to preserve the pueblo structures here that date back to 1150 AD, showing just how storied—and beautiful—New Mexico truly is.
Photo: Christopher Michel