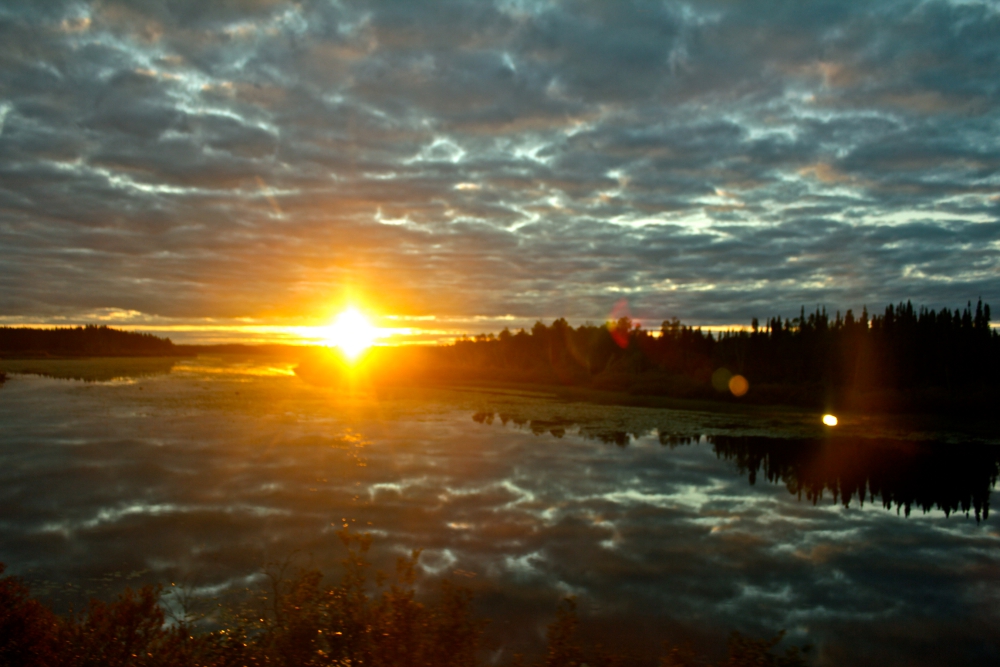 The second day on the train journey ended with this gorgeous sunset reflecting off a placid lake. All photos: Author

Winnipeg is base camp for Churchill (if you’re not approaching from some even further removed region of the Canadian North, that is). And Churchill is the launchpad for some of the North’s most sought-after wildlife encounters. Before you make your way up there, spend a day or some wandering the chilled-out provincial capital. Then get going.

The traveler to Churchill has two choices. You may fly over the vast tracts of forest shot through with lake and pond and bleeding arctic sunshine in a small, underpopulated Calm Air aircraft. Or you can board the VIA Rail train for a 50-hour marathon of boreal forests and huge swaths of undisturbed taiga.

I chose to train there and fly back and suggest doing the same. A one-person sleeper is a little curtain-shaded sleeping chamber that’s open to the aisle, and a 3-person cabin is a relatively spacious room equipped with folding beds, a bathroom, a sink, and a giant window to view the country swooshing past. The latter is not cheap, but if you split the cost among friends, the comfort of space and privacy is substantial. 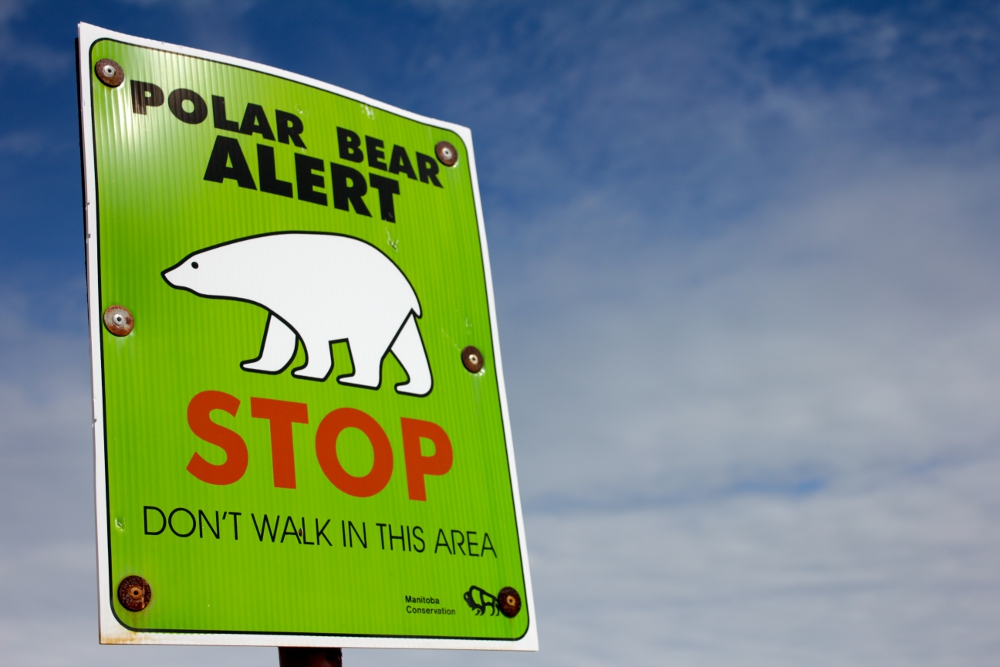 Get used to seeing these in Churchill, as the presence of polar bears is a matter of routine in the “polar bear capital of the world.”

Churchill is generally regarded as one of the best places for polar bear viewing accessible to the general public. Most polar bear tours are held in the Churchill Wildlife Management Area, where bears gather each fall and tundra vehicles amble out on the old, rutted military roads to offer visitors a chance to see Earth’s largest land carnivore in person.

I visited in mid-summer — prime whale watching season, but the resident polar bear population makes itself scarce during the warm months. They’re present but not hunting, and spend most of their days sleeping and trying to conserve energy until the winter ice forms over the Hudson and their seasonal hunting ground reappears.

I joined a Tundra Buggy half-day excursion. On boarding the massive vehicle (we entered from a ramped platform), I noticed the shotgun. Our guide gripped the gun whenever his guests set foot on the tundra, a place of open flats, rocky outcroppings, wildflowers, and polar bears. A bear could’ve been napping in a rock nook or just behind a scrubby stand of pines, and if firing in the air didn’t scare the shaggy beast away from the camera-toting tourists, it would have to be brought down.

We spied a bear, far, far afield and very hard to see. No, not a bear! A mother and a cub! Here, take my binoculars.

Zoom lenses brought the family, a quarter mile away, into focus, and we stood struck by the pair. People took hundreds of photos, shaking their heads and congratulating themselves on being there at the right moment. The slow march of the two bears brought them gradually closer, across a tidal flat and channel where the cub splashed and tackled the mother. To the naked, sun-shielded eye, the two white blobs moved at a snail’s pace. 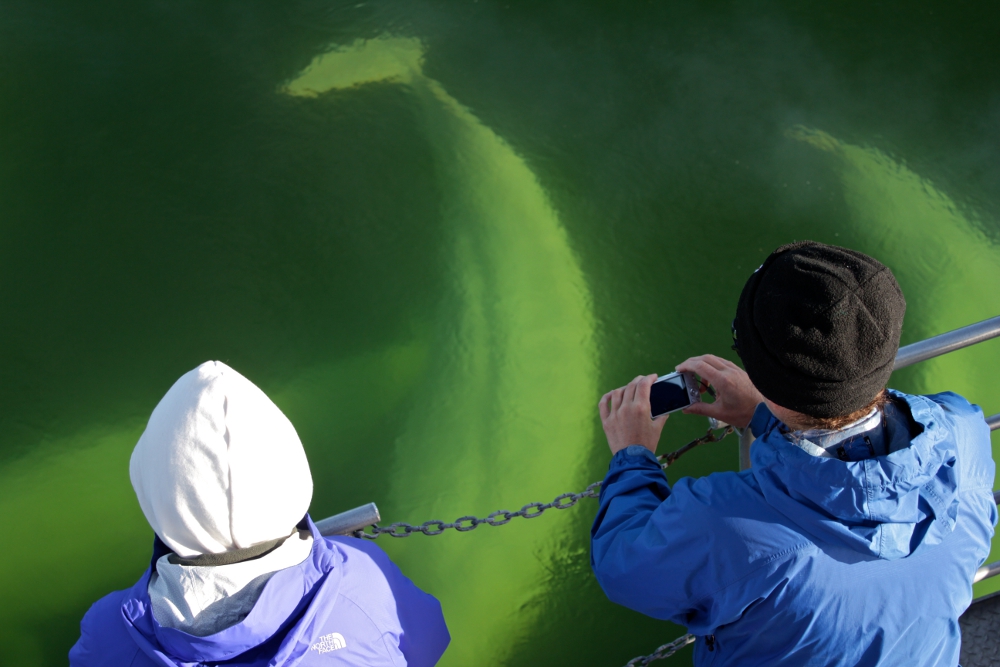 The belugas played and swam up to and under the boat, and the clear waters of the Hudson made for a perfect viewing of their scarred and muscled backs.

There are a few ways to check out the massive beluga whale population that fills the bodies of water surrounding Churchill. For starters, you can walk to the edge of town and the small sandy beach facing Hudson Bay (keep your eyes peeled for a polar bear passing through), where you can watch the slick, pale backs of the whales break the surface just off shore in pairs and pods.

Then slide into a sea kayak and paddle the easy waters of the Churchill River, where belugas gather by the thousands. A Sea North Tours guide in a Zodiac inflatable boat will hang back and let you enjoy yourself as a group of four whales glide beneath the boat face up, all eyes on you. Three more will curve their backs and surface beside your paddle, and you’ll have to steady yourself from getting startled and tipping over.

Kayaking brings you close, but for a true face-to-face encounter, grab a dry suit and snorkel and get right in the drink with the “canaries of the sea,” all chirps and clicks. The gloves, hood, and booties do a lot to mitigate the ferocious shock of the water, but it’s still very cold. With one hand, grasp a line attached to the Zodiac — either on the sides or from a longer line trailing safely behind the motor — and with the other, hold your GoPro and pray your footage is turning out. It is.

To keep dry, exert no energy, and still have a good time, board the Sea North 2 to see the whales from the safety of the big boat. The vessel is propelled by twin Hamilton jet pumps which shoot water and bubbles out the back but have no moving external parts, keeping the whales safe. Some of your best pictures will present themselves when the whales play in the boat’s jet stream, turning into the vortices of bubbles and trailing the boat in its slow rotations. 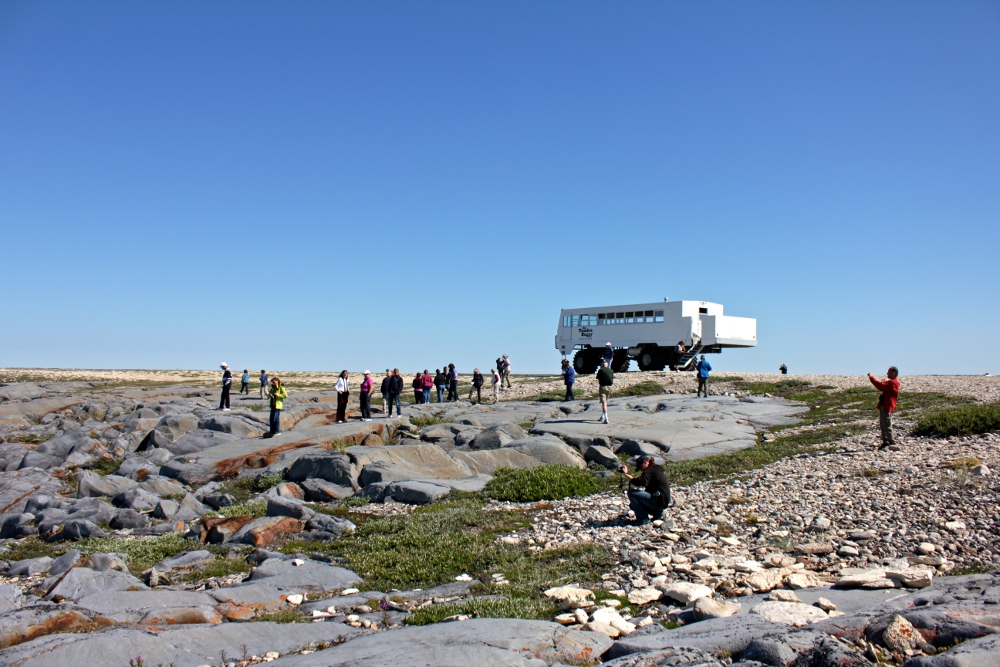 The Tundra Buggy is a massive four-wheeled beast that ushers 2 dozen tourist into what would otherwise be inaccessible tundra. Everyone on this tour was searching for their bucket list polar bear picture — most of them got it.

If the half-day Tundra Buggy tour only whetted your appetite, you can go further into this vast landscape on a guided hike with Nature 1st, or a stay on the Tundra Buggy Lodge, a rolling hotel that travels deep into polar bear country.

On a half- or full-day hike, you’ll get the chance to spot Arctic fox, search for caribou, and explore the taiga / tundra with an experienced guide. The summer tundra is not the frozen snow waste you might expect. Its scrubby stands of pine soak in the long days of sunlight, and the sweeping flats are carpeted in lichen, wildflowers, and clear pools of standing water. Tiny scurrying trails lead to the edges of ponds where little feet have come to drink.

From Hudson Bay inland, the land is striated with color and texture; water, gravel, kelp, mulch, rock, and grass arc away like a terrestrial rainbow. 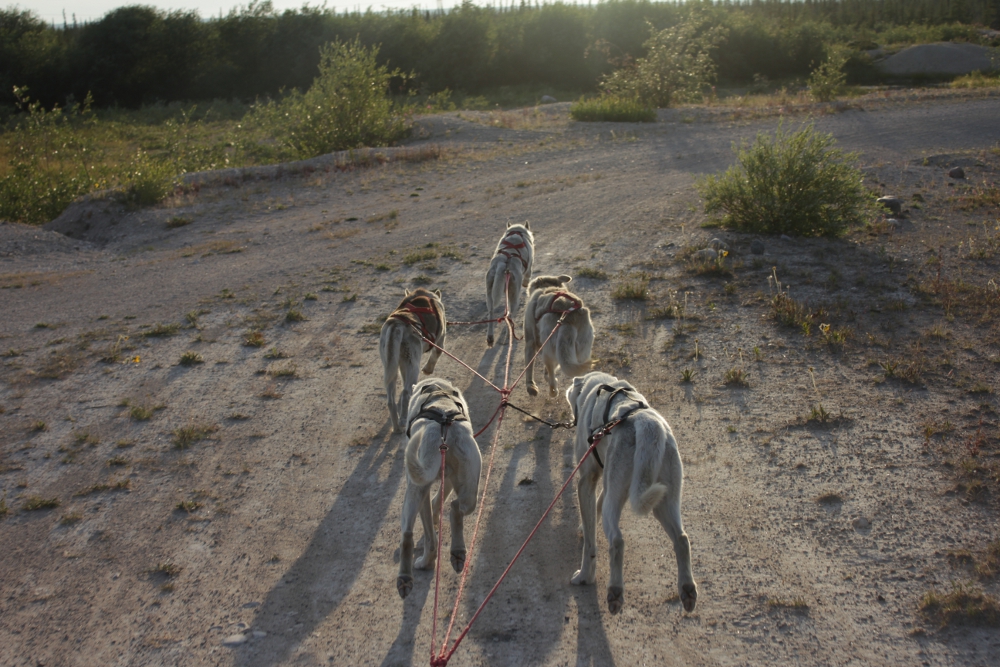 When there’s no snow on the ground the dogs, and Dave, train on a dog cart. Dave drives adventurous visitors around a fast-paced dirt track ride he dubbed the “Ididamile.” One moment I was in a stationary dog cart, the next I was in a blur of fur and evergreens as the dogs charged forward, obeying Dave’s every shouted command.

On a dirt road just outside of town, Dave Daley of Wapusk Adventures introduces his guests to the life of a musher. Outside his home, a kennel of puppies follows his every move with expectant eyes, and the 30+ sled dogs he trains go absolutely ape shit when they see him — yipping and straining at their chains, hopeful that he’ll hook them to a sled (or, in the dry summer months, a cart) and be allowed to race forward.

Dave walks from dog to dog, greeting, introducing, checking them for indications of injury or ticks or soreness. Each dog loves him and, in his own words, would “die running if I asked them to” — he never would, of course. His dogs mean everything to him, and seeing that is the biggest gift he gives you.

When you step onto the dog cart or sled, season depending, and Dave tells you to hold on — hold on. You’ll skitter around corners and end the ride smiling and petting rambunctious dogs, not caring about getting slobber on your hands. 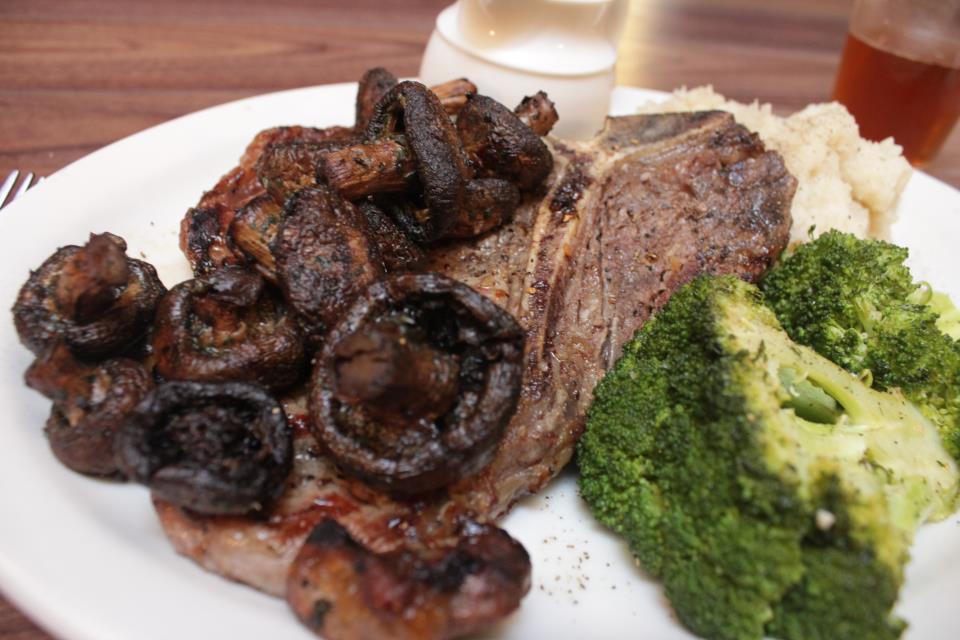 The special of the night — this pub pulls no punches with its grub.

You’re going to eat most of your meals at the Tundra Inn Pub and Gypsy’s Bakery — I found the latter to be a nexus of Churchillian comings and goings. The counter line stayed at a steady 3 patrons deep as locals greeted each other and tourists sat looking about the homey cafe, waiting for their pulled pork sandwiches. The coffee is shit but the bread and the meat and the service is great. There’s a hot dog meal special and a case full of baked goods. Grab some for a late-night hotel snack.

The Tundra Pub Inn is a close relative of the Tundra Inn and the Tundra Inn Hostel. The three buildings form a triangle on a quiet street (every street in Churchill is a quiet street) on the north end of town. Get a private room in the hostel to save a few bucks and make a few friends, and stroll to the pub in the evening for 3 beers and a steak buried in a sexy heap of mushrooms and gravy. This kind of arteries-be-damned meal is the only appropriate reaction to a polar bear sighting and a beluga whale orgy all in the same day.