I STAND ALONE, NAKED AND SHIVERY in a treatment room decorated in faux-barn.

The whitewashed walls are adorned with iron pots, wood butter paddles, pitchforks, and scythes, all looking too new and clean to ever have been used for farming. A cast-iron stove squats behind me, still hot from hours spent warming tubs filled with the village’s sweetest, tenderest grasses. In front of me, a cot spread with a clean white sheet beckons.

I’m here for a hay bath.

For reasons that have everything to do with long, dark winters, large meadow-scapes, and being isolated from normal civilized entertainments, Italy’s South Tyrolean farmers long used the hay bath as a folk cure for rheumatism, arthritis, and general aching muscles. And as a major social event.

But that was a century ago, and now I’m having serious doubts about what I’ve signed up for. I have hay experience. I live on a ranch where we grow a thousand tons of the stuff, and I know for a fact its prickly stalks are more likely to induce allergic reactions than soothe.

I think this is what it must feel like to be a teabag.

The hay bath attendant arrives, using oven mitts to carry a shiny 10-gallon copper cauldron in which hay has been steaming for two hours. She lifts the lid, releasing a fragrant cloud redolent of ladies’ mantle and mountain arnica, thyme and cinquefoil. It’s grassy, fresh, an alpine meadow in a pot. But this is highly regulated fodder, subject to Italian government regulations on content, altitude, and minimum distance from roads at which the grass, with its 40 native herbs, can grow.

She hands me a crinkled wad of pale blue tissue paper. It’s a tiny disposable G-string, barely enough to cover that part of the body where I would not want damp hay to intrude. “Put it on,” the attendant instructs, in a heavy German accent. Most residents of South Tyrol prefer to ignore that they haven’t been part of neighboring Austria for nearly a hundred years.

Somewhat embarrassed by attire I imagine would make a Las Vegas showgirl blush, I wait while the attendant spreads a mass of dark green, wet hay on a water bed. “So, lie down please.” Steam rises as I crawl onto my sylvan bower. It’s hot, but surprisingly soft. Lying on my back, arms clenched at my sides, I hold my breath while the rest of the hay is spread over my body, including a moist hay pillow under my neck.

That’s it, I think, just before the attendant pulls a flannel blanket over me, yanks the edges tight, and seals me in with a vinyl sheet.

All I can think is that if I sneeze — and why wouldn’t I, with hay all over me — I won’t be able to wipe my nose. Grateful now that South Tyroleans are so Germanic-ly punctual, my only concern is the next 10 minutes will feel like an hour. 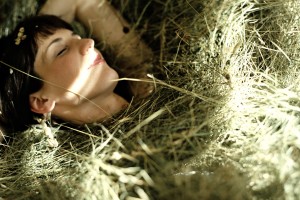 Photo: Art of the Spa

I close my eyes, do a full-body inspection searching for itches, detect warmth seeping into my skin. Perspiration dots my forehead. My breathing slows as I inhale a meadowy bouquet with overtones of mint. Swaddled inside my hay + blanket bundle, I fall into some sort of trance, thinking about how the purple-flowered prunella herb, commonly called healall, should sooth the scratch on my calf from the hike earlier in the day.

I also think this is what it must feel like to be a teabag.

Suddenly, a cool cloth is dabbing at the sweat on my forehead. “Yah, so, it is 10 minutes now. All is okay?” the attendant asks, more grandmotherly than authoritarian. I nod. “Good! Ten more minutes and I will check again,” she tells me. The clack of her spa sandals fades, leaving me to steep undisturbed.

My world is now one of hot, aromatic dampness. The heated waterbed keeps the grass mix warm while the soft scratchiness of the hay makes my skin feel alive. If I had rheumatism, I have no doubt this would cure it.

In what seems like too short a time, the cloth is again clearing beads of sweat from my face. My kindly attendant looks in my eyes. “Twenty-five minutes is the maximum to be in the hay. But if you would like to end the treatment now, it is okay.” I shake my head. I have no desire to end the treatment. Ever.

Tagged
Lifestyle Insider Guides Italy
What did you think of this story?
Meh
Good
Awesome