Fraser Island, sitting 200km north of Brisbane along Queensland’s east coast, is the world’s largest sand island at 122km long and ranging between 5 and 25km wide.

Its 400,000 acres are home to eight distinct ecosystems — moving from the mangrove, wallum, and banksia forests of the west and into the subtropical rainforest of the interior, skirting clear dune lakes and bouncing through ‘wet’ and ‘dry’ eucalyptus forests, before finally emerging on the wind-lashed coastal dunes of the expansive eastern beach, is literally a trip through time. Fraser’s dunes comprise “the longest and most complete age sequence of coastal dune systems in the world,” with the sand mass of the island being at least 800,000 years old. A single grain of sand, driven ashore by the prevailing southeasterly wind, will take 60,000 years to move from Fraser’s east coast to its west, a journey that takes just over an hour in our Land Cruiser.

Passing towering satinay trees, the crystal waters of Lake McKenzie, and the intricate patterns of wind and sand on the eastern dunes, I get the feeling that through the windshield I’m watching a geological and evolutionary time-lapse.

The indigenous Butchulla people call the place K’gari, which translates roughly as “paradise.” 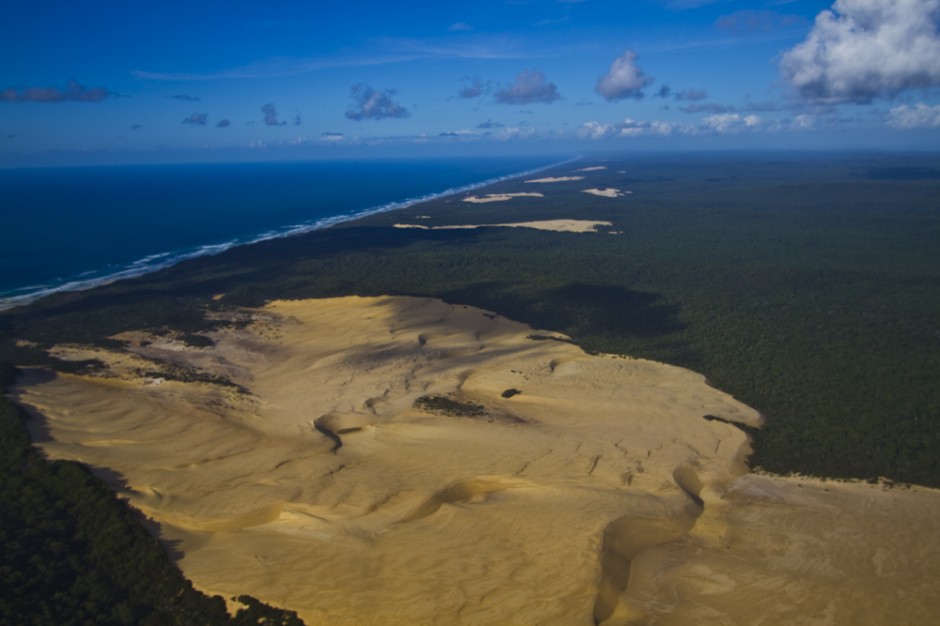 Seen from a few thousand feet above, the endless assault of wind, sea, and sand which continues to shape the island becomes eminently more visible. The large dune at the bottom of the frame is known as the Knifeblade Sand Blow. Once sand breaks through the barrier formed by the spinnaker grass and other coastal vegetation, it moves inland and can flatten forests. 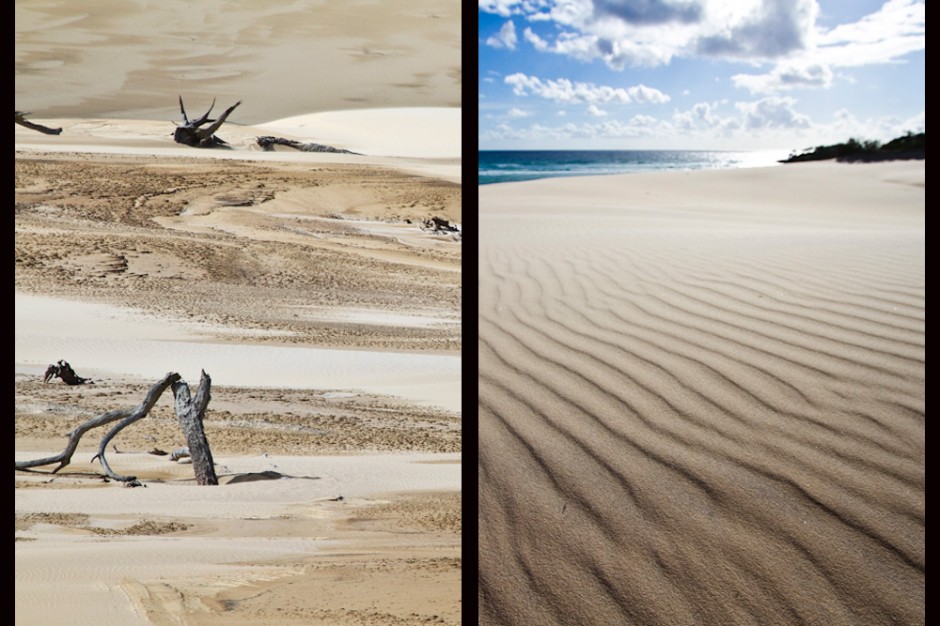 The remnants of an ancient forest that stood in the way of the encroaching sand can be seen on the left in the Stone Tool Sand Blow. On the right is the Binngih Sand Blow, just above Waddy Point, the remains of an ancient volcano. It was along these volcanic rocks that sand first began to accumulate and form Fraser Island 800,000 years ago. 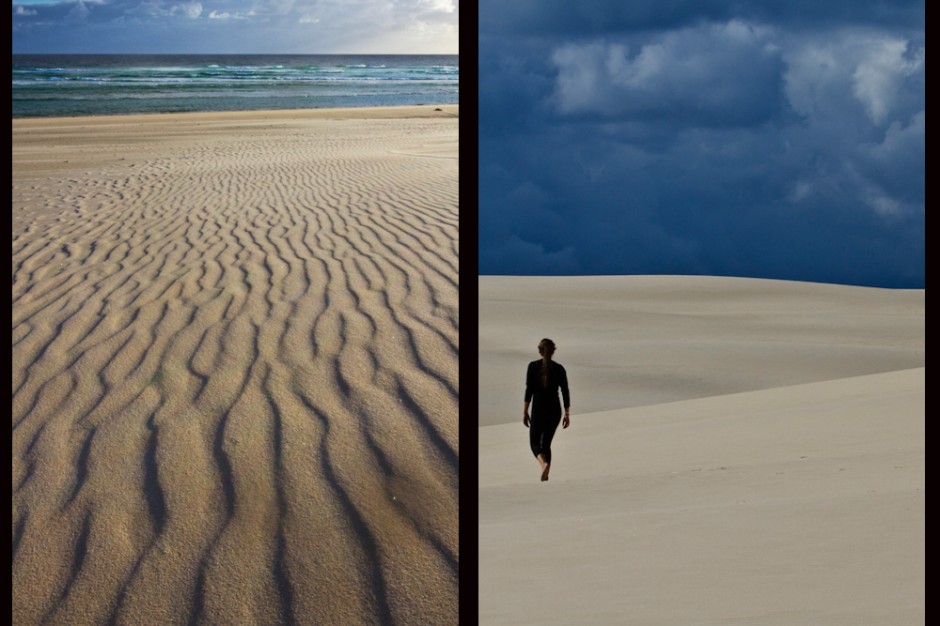 The coastal dunes on Fraser Island were magnetic to a photographer's eye. The endless variations of texture and the play of light, especially in the early morning hours, was incredible. Wandering through the empty dunes before approaching storm clouds, the scene took on surrealistic character...lost in time and space. 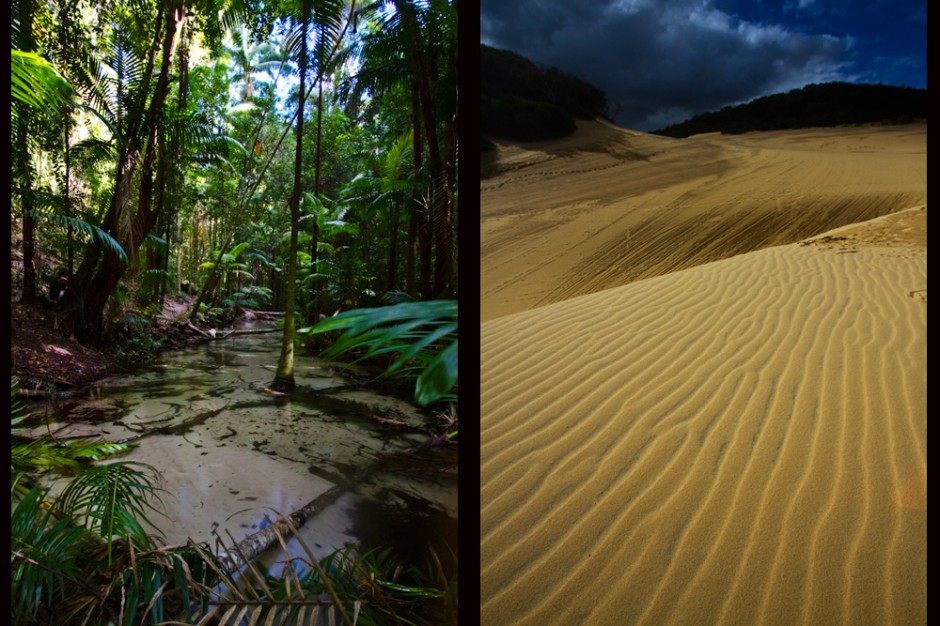 The desolation and stark beauty of Fraser's eastern dunes exist only a short walk from subtropical rainforest that is teeming with life of every shade of green. One of the reasons such disparate environments exist so close to one another is the vast amount of fresh water hidden beneath the sands. Estimates vary, but it's believed that the aquifer beneath Fraser contains around 15 million megalitres of fresh water…to put that number in perspective, the iconic Sydney Harbor, in its entirety, contains only 500,000 megalitres. 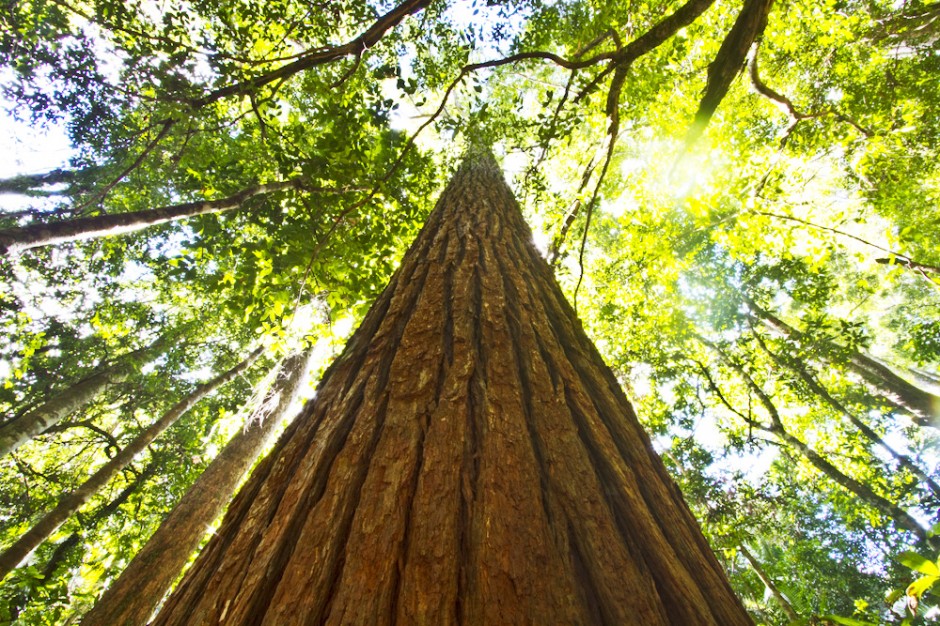 A giant satinay tree stands sentinel in the Fraser Island interior. The island was lumbered heavily in the early 20th century, and while the satinay initially avoided the ax due to its tendency to warp when cut, it was discovered in the 1930s that satinay wood was extremely resistant to rotting in water and many of the giants were felled and shipped off to ports around the world. Many were used to line the Panama Canal. The logging operations were stopped after an aggressive campaign by FIDO (Fraser Island Defenders Organization) and the eventual listing of Fraser Island as a UNESCO World Heritage Site in 1992. 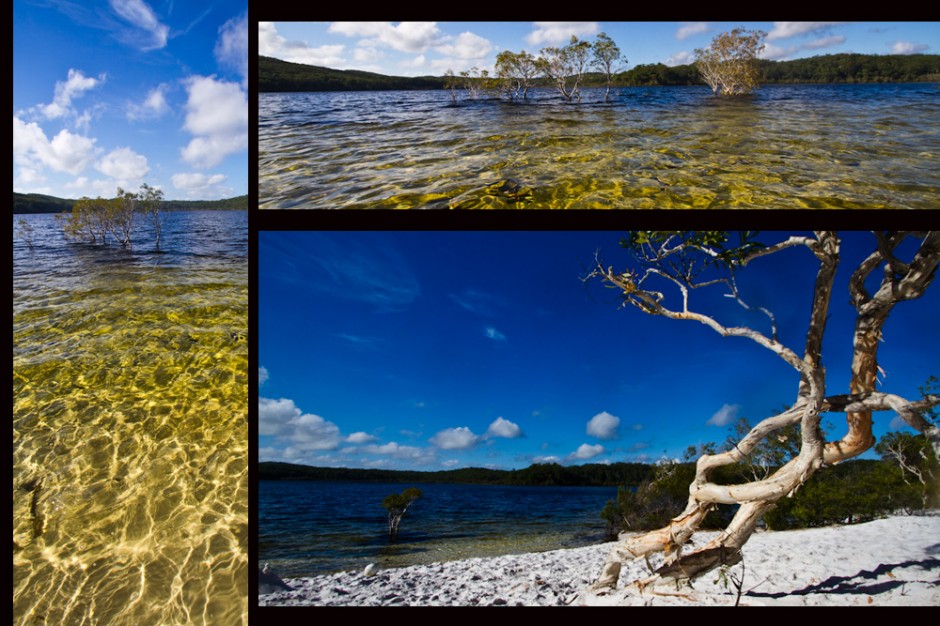 One of the most famous attractions of Fraser Island are its immaculate perched dune lakes. Fed almost entirely by rainfall and existing above the water table thanks to a lining of organically cemented sand known as coffee rocks, the lakes hold some of the purest water on Earth. In many cases, such as here in Lake McKenzie, the water is ‘too pure’ to support life, with a pH of around 4.8. Characteristically a mesmerizing shade of blue, during this past January a record amount of rain fell throughout Queensland, and Fraser Island saw enough rain to drastically raise the water levels of all the lakes. In these photos, the water color is tinged green with tannins from the runoff, and much of the spectacular white-sand beach is underwater. 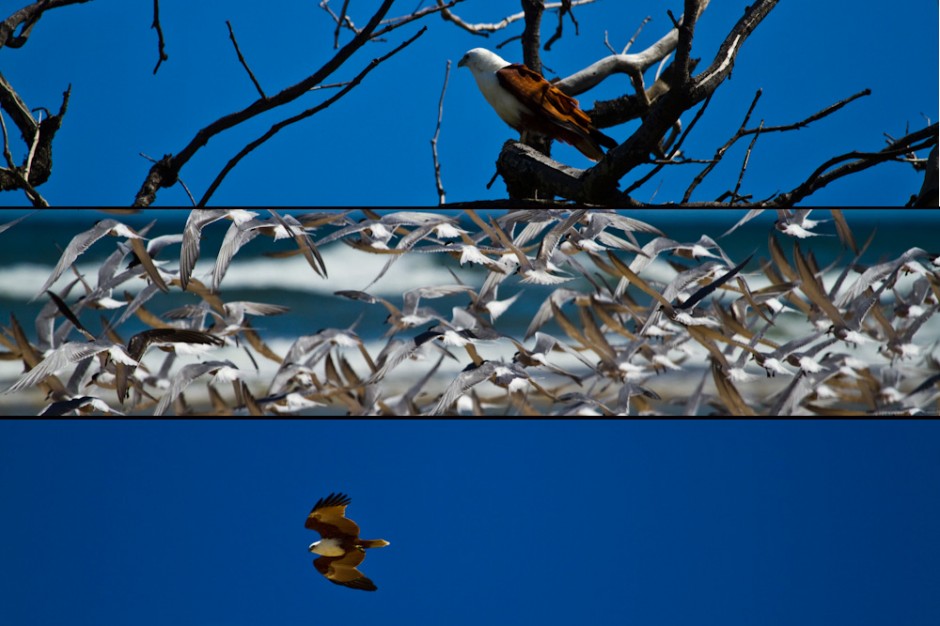 The birds own the skies above Fraser, and the high canopy rings with a hundred variations of squawk and song. From the solitary birds of prey such as the Brahminy kite, pictured at top and bottom, to the flocks of migrating terns gathered on the beach to feed and rest before moving on. 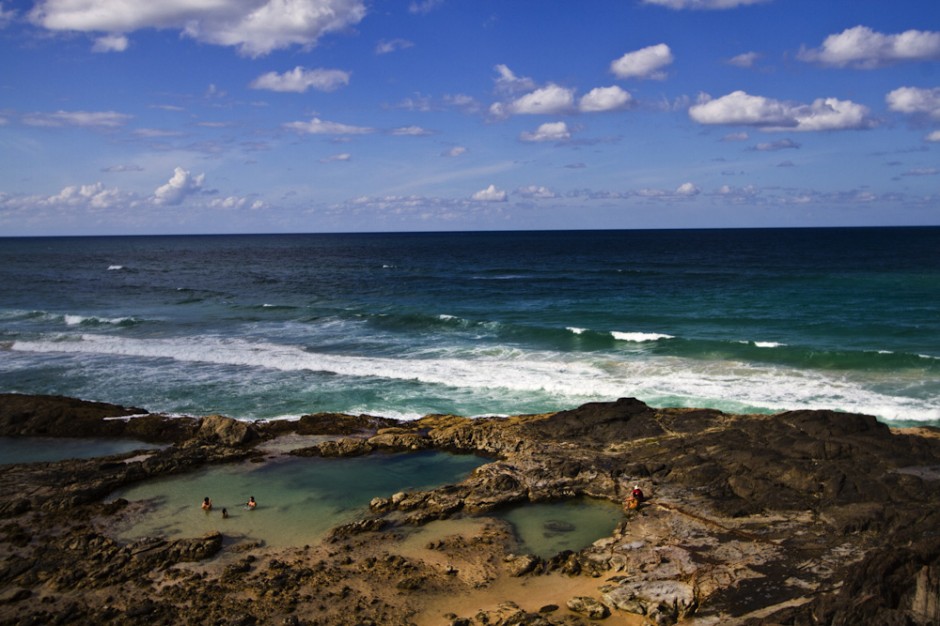 Relaxing in the natural saltwater pools known as the Champagne Pools, a few of Fraser’s nearly 400,000 yearly visitors soak it up and take in the view. 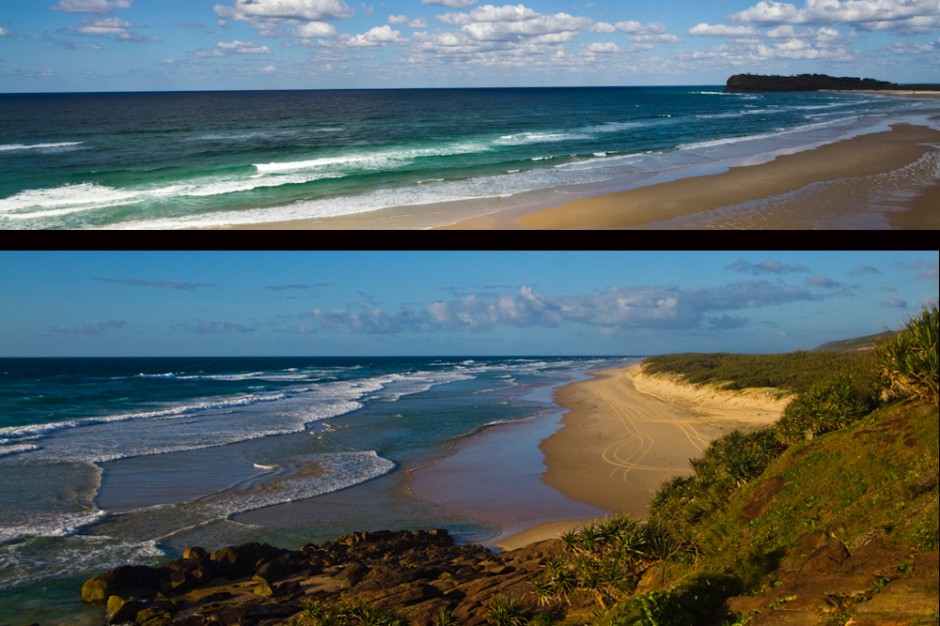 The largest feature on Fraser’s coast is the volcanic promontory known as Indian Head, so named by James Cook when he sailed by Fraser Island in 1770 and saw countless Aboriginal campfires dotting the outcrop. Seen from two different angles: Above is the view looking towards Indian Head from the north, and the lower image is looking south from halfway up. 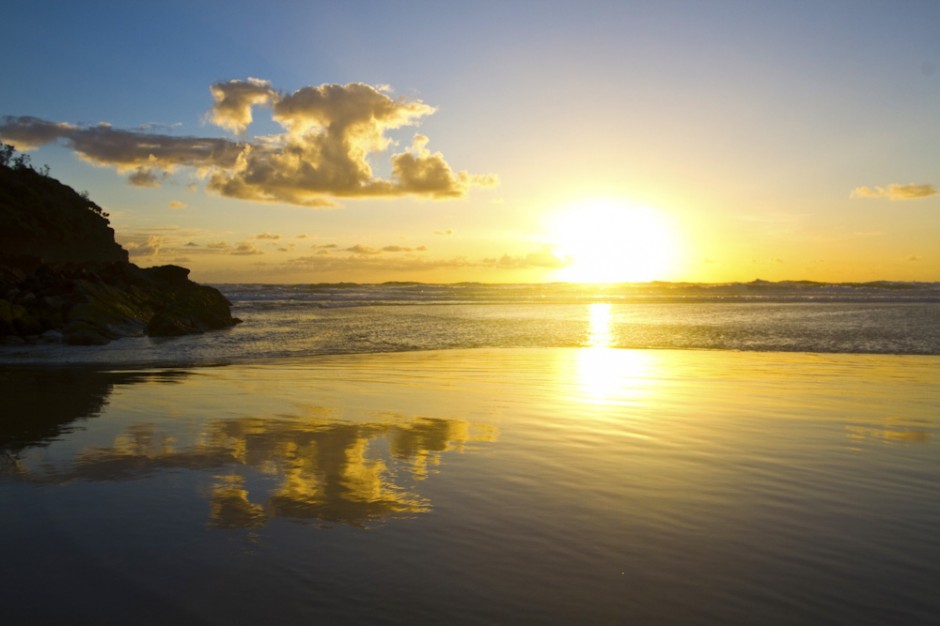 Indian Head at sunrise. After a couple weeks exploring the island, it was pretty easy to understand how the place got its ancient name of K’gari, labeling it as an earthly paradise.

This post is proudly produced in partnership with Tourism Queensland.
Tagged
Insider Guides Queensland: Adventure in the Sunshine State
What did you think of this story?
Meh
Good
Awesome
✖
travelstoke
Download the mobile app
stoked by