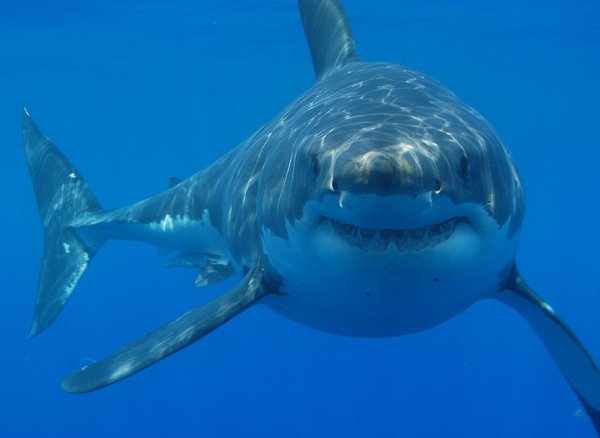 Carly Blatt gets up close and personal with the king of the marine food chain. What she learns may surprise you.

We each took a healthy breath and disappeared beneath the Indian Ocean. Two Great Whites sashayed just inches in front of us in rapid succession. Minutes later, another sprinted past in search of a morning snack.

Despite the fact that our guide’s instructions to head into the water when a shark was coming seemed a bit, well, counterintuitive, we’d obeyed without question. After all, we’d paid money to get close to Great Whites…in their natural environment.

Diving with sharks is often considered an extreme adventure activity. But instead I found it to be an educational — and yes, thrilling — way to gain an understanding of the creatures that have stricken fear in millions due to movies like Jaws and media reports of shark attacks. 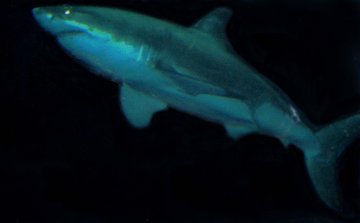 My outing with Shark Lady Adventures (launching from Gansbaai, two hours east of Cape Town) began with an educational lesson about Great Whites. This included what kind of behavior to expect and a discussion about common myths.

Yes, they are carnivores. No, they’re not particularly interested in eating people.

Still, that assurance didn’t do much to ease the tension when our guide offered up this factoid: “Sharks can pick up heart vibrations easily. So if you get scared while you’re out there today, the sharks will know.”

Preparing to Get Intimate

“Does that thing look safe?” someone muttered to no one in particular.

Our boat jetted out to Shark Alley, which boasts the densest population of Great Whites in the world.

We opted for the “breath hold,” at our guide’s suggestion. It’s exactly what you’d expect — you hold your breath, dunk beneath the surface, and view the sharks swimming by — no diving certification necessary. The sharks we saw didn’t hang out in one spot anyway, so SCUBA gear wouldn’t have helped.

After anchoring, the cage was slowly lowered into the water. Our group watched in fascination.

“Does that thing look safe?” someone muttered to no one in particular.

It seemed sturdy, and of course we knew it was designed to protect shark-gazers like us. Still, it was hard not to imagine some minor flaw that would turn us into shark food.

The staff member we’d dubbed the “chum master” set to work creating a lovely chum soup to attract the sharks, while another chopped off a fish head to use as bait.

We slipped into full-body wetsuits, booties, and goggles. Once the bait was cast, the first group of four hopped into the cage — after a final reminder from the guide that we should “keep all of our limbs inside.” 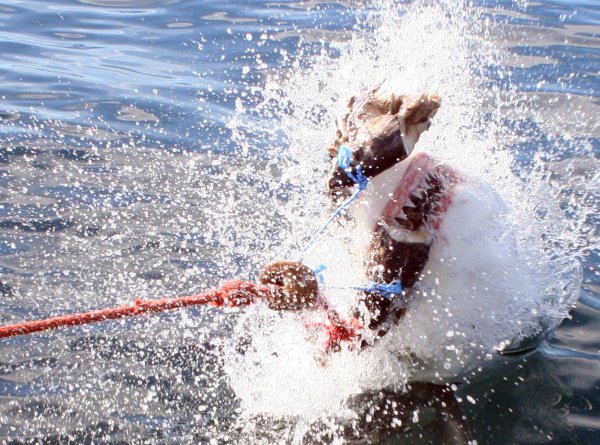 Face to Face with the Ocean’s Top Predator

To save our breath, we were instructed to keep our heads above the surface until the guide gave the signal. It didn’t take long.

We gulped a breath and went down. The shark zipped by to say hi, a race of gray a finger’s length from our eyes.

When we came up again, we were all smiles, despite a few initial underwater shrieks. Another shark coasted by just moments later. And then another — this one body-checked the cage while going for the tuna bait. We were treated to a lovely view of his rows of sharp, not-so-pearly whites in the process. 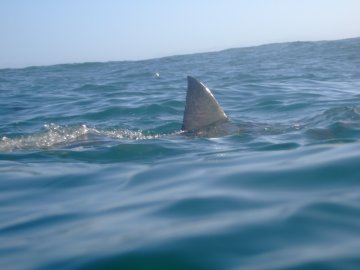 It’s fascinating to see how different each animal is, and we soon started to recognize them. You can see their distinctive eyes, how their scars differ. Each one has its own personality.

Everyone had two 30-minute sessions in the cage, although our guides said the time can vary based on a variety of factors. You can also join a trip as a surface viewer, but I strongly suggest getting in the water.

I found it to be more of a fascination sport than an adrenaline one. Sure, it’s a tad scary when that first shark comes at you. But soon you realize the experience is simply about watching these creatures in their natural habitat and the fear dissipates.

The best months for shark sightings are April to August, while early January to mid-March tend to be the worst. When planning a shark diving adventure, keep in mind that inclement weather may prevent the boats from going out, so it’s best to allocate an extra day in case your original outing is postponed.

Most participants either do a day trip to Gansbaai from Cape Town or stay in nearby Hermanus.

Shark Lady Adventures charges R1500 (~$170) per person for the experience. For more information, visit their website. Cage Diver is another option.

Sharks, elephants, and bears, oh my! Find out how to come face to face with these and other perilous species in “8 Trips for Getting Close to the World’s Deadliest Animals.”

For something a bit tamer but equally unforgettable, read the Matador travel article “Diving with Whale Sharks.”

Tagged
Outdoor Parks + Wilderness South Africa
What did you think of this story?
Meh
Good
Awesome

For the perfect day of hiking and Colombian coffee, head to Jardín
10 best beach towns in the US to explore during the off-season
The best cold-weather hiking in New Mexico
The best national parks to visit this winter
The 11 hardest, most dangerous mountains to climb in the world