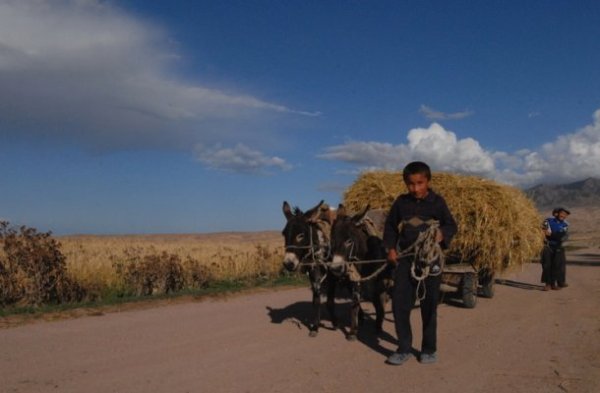 Unless you’re driving in from China or a neighboring ‘Stan, every Kyrgyz trip starts and ends in the capital, Bishkek. The surrounding mountains may call out, especially once you’ve eyed up the Soviet concrete and rush-hour traffic, but they’re not going anywhere. Take a day or so to explore the city.

It’s been 20 years since independence, but entertaining reminders of Communism and the Cold War are easy to spot. 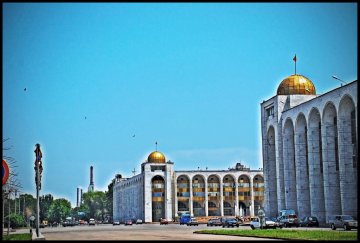 The fresco of an American cowboy, complete with stars ‘n’ stripes t-shirt, riding high on a Pershing missile, is a highlight of the State Historical Museum. Then there’s the statue of Marx and Engels, glaring across at the American University.

Other things to look out for are the former home of the Soviet military leader Mikhail Frunze, an unusually high number of karaoke stalls, and pictures of Santa Claus, a latter-day Kyrgyz hero after a Swedish logistics company informed the Kyrgyz government they were the best-located country for the speedy delivery of Christmas presents.

The warm-water lake of Issyk Kul is only half a day’s drive from Bishkek and after Titicaca is the largest alpine lake in the world. The Soviet navy used part of it for testing torpedoes.

Today, you’re unlikely to get caught in the middle of a military exercise, but unless you want to be overwhelmed by Russian families holidaying in resorts and health spas, avoid the lake’s northern shore. Far fewer people (and less development) mar the south. 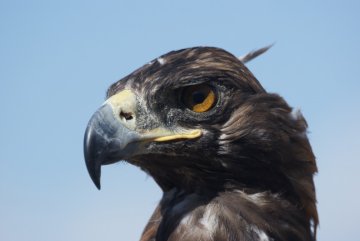 This is also the region to check out the Kyrgyz pastime of eagle hunting. We met up with our eagle hunter and his golden eagle, Tamara, in the village of Bokonbaeva. Over the course of an afternoon, Tamara caught us three rabbits and an unidentified rodent — the former were more than enough for supper.

You can also watch the eagle fly without bringing back something formerly cute and fluffy — just take your own bait meat with you. The eagle hunter won’t understand your reasoning, but Tamara doesn’t mind either way.

From Issyk Kul, you can trek on foot or horseback to Chong Kemin, which literally means “big valley” in the Kyrgyz language.

Local companies, including the popular Community Based Tourism (CBT) co-operative, can organize both horses and guides, and this is really the best way to get to know the country, climbing passes and peaks well over 4,000m high.

We based ourselves in the village of Ashu, in the bottom of the valley, at the recommended Ashu Guesthouse (ashu@knet.kg). Their wood-constructed chalets have fires and the walls are hung with local rugs and embroideries. There’s also a sauna and meals are made with local ingredients like wild berry jam and roasted mountain yak. 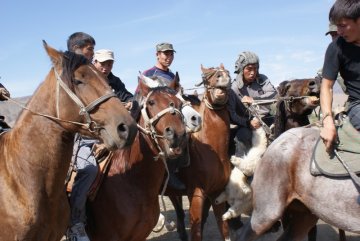 In Ashu, you can also watch a match of Kok Boru, or ‘Dead Goat Polo.’ Local teams compete each weekend on a long, thin pitch by the river, galloping from one end to the other with high screams and, at times, hysterical laughter.

The 60lb goat — dead, gutted, and with its head and legs removed before the game begins — is thrown from one player to the next with surprising speed and accuracy.

As each goal is scored, a cheer erupts from the small crowd of spectators who, a minute later, are forced to dive for cover as a horse tramples over the sideline at full pelt. Keep your eyes on the game.

The Kyrgyz people have followed a nomadic lifestyle for thousands of years, and the best way to experience it is to join a family in their yurt on the high pastures. We hiked three days to Song Kol Lake, where CBT has 10+ yurts for tourist lodging in the summer months.

One of the novelties of yurt stay is you never know who you’re going to be sleeping with.

Horse riding, yak milking, and goat herding make up the days. The yurts themselves, insulated by the felt and other textiles that line the walls, are fairly warm, but it’s worth bringing your thermals as the toilet huts are a far enough walk in the middle of the night.

One of the novelties of yurt stay is you never know who you’re going to be sleeping with. Beds are laid out each night and made from a stack of blankets and rugs. If there are six guests, the bed will be six people wide. It’s cozy but takes a little getting used to. 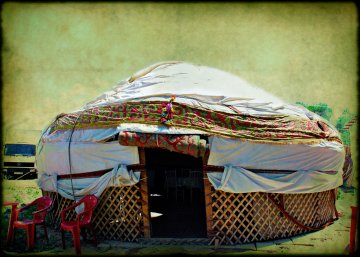 * Currently there are no direct flights to Kyrgyzstan from either Europe or the USA. You’ll need to fly to a regional hub such as Moscow or Almaty (Kazakhstan) and travel on from there.

* Tourist visas are available on arrival at the airport in Bishkek and cost £50 for 30 days. If you overstay your visa (as I did), you’ll be fined and the officials will get quite stroppy.

* Few people speak anything other than Kyrgyz and Russian. Take a phrasebook…and your charades skills.

* If the mountain yak gets old, head to the British Consulate in downtown Bishkek. It doubles as a greasy spoon café called Fat Boys and serves mean hash browns.

There aren’t many, but the Matador community blog posts on Central Asia are worth a read.

Also, find out which Matador editors have Central Asia on their 2010 destination wish lists.

Tagged
Outdoor Kyrgyzstan
What did you think of this story?
Meh
Good
Awesome

The 11 hardest, most dangerous mountains to climb in the world
For the perfect day of hiking and Colombian coffee, head to Jardín
The best backcountry ski lines in Rocky Mountain National Park
The 6 most epic and unique ways to see the northern lights
How to actually have fun on a ski trip if you don’t ski

This is Kyrygzstan at ground level

How to move to Kyrgyzstan and start a business

The mountains of Kyrgyzstan

13 Additions to the UNESCO World Heritage List (and One Deletion)