THE NORWEGIANS really mean it when they say, “You have to be here to believe it.” I didn’t even know that was a legit tagline until after my trip, but that’s exactly what I kept saying to myself when thinking about how I’d describe Fjord Norway to friends back home. My solo trip was jam-packed with scenic and sensory overload, but after going hard for my 9-day window, I still felt like there was so much more to see and do. A constant FOMO mindset set in, and finding time to sleep became an issue. Action-filled days blended with late-light nights and capturing 2am sunsets, only to rise early for the start of another adventure.

Trying to read the names of destinations on my itinerary had me laughing out loud: Drive the Atlanterhavsveien via Haholmen Havstuer, before ascending the Trollstigen on the way to Geirangerfjord to see the infamous Storsaeterfossen and hike to Skagefla… What could these fairytale-sounding places be like? I had no idea. Turns out they are exactly that — straight out of a fairytale. Superlatives don’t come close to describing the surreal beauty of the place. It’s full-on ‘see it to believe it’ country. After two wide-eyed and sleep-deprived days in Alesund, I floored my little diesel rental car north into the maze of fjords and curvy, tunneled roads, with only one known goal: to see, do, and shoot as much as possible in the seven days I had left in this incredible region.

The biggest challenge besides keeping an empty memory card and charged battery on hand was resisting the urge to stop at every magazine-cover-worthy scenic overlook or waterfall. Without this self-control, any imagery enthusiast would not make it very far in Fjord Norway, and I was constantly running late after stopping too often. The only thing that kept me from getting completely lost and wandering into the hypnotizing landscape were the kind and beautiful Norwegian people I met along the way. That and the promise of a tasty pilsen and seafood platter at every establishment I encountered.

Here are my top 9 experiences from 9 days in Fjord Norway.

1. Exploring the port of Alesund

I could’ve spent the entire 9 days in Alesund and never gotten bored. The premier Art Nouveau city of Norway has a remarkable history that’s reflected in its unique architecture and geographical placement. The opportunities for action and adventure are equally impressive. From high-speed rib-boat rides to drifting in placid water watching the puffins or hitting the town at night, Alesund was the perfect place to get a feel for all that Fjord Norway has on offer. 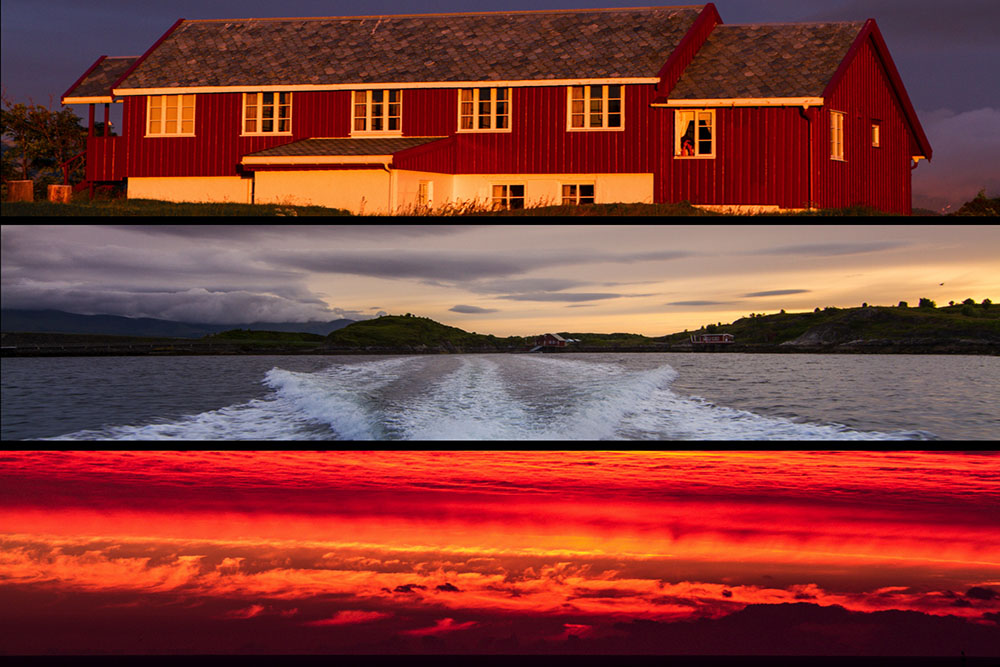 One reason for visiting Haholmen would be just to drive the Atlanterhavsveien (Atlantic Ocean Road), a coastal highway drastically different from the inner fjordlands and more fun to drive than the Koopa Troopa Beach map in Mario Kart. Just make sure to observe posted speed limits. After skidding my little diesel into Haholmen, I took a ride on the Saga Siglar out to Haholmen Havstuer — where I met the last living Viking, Ragnar Thorseth, ate the best clipfisk in Norway, and watched the most insane sunset I’ve ever witnessed…just another day in Fjord Norway. 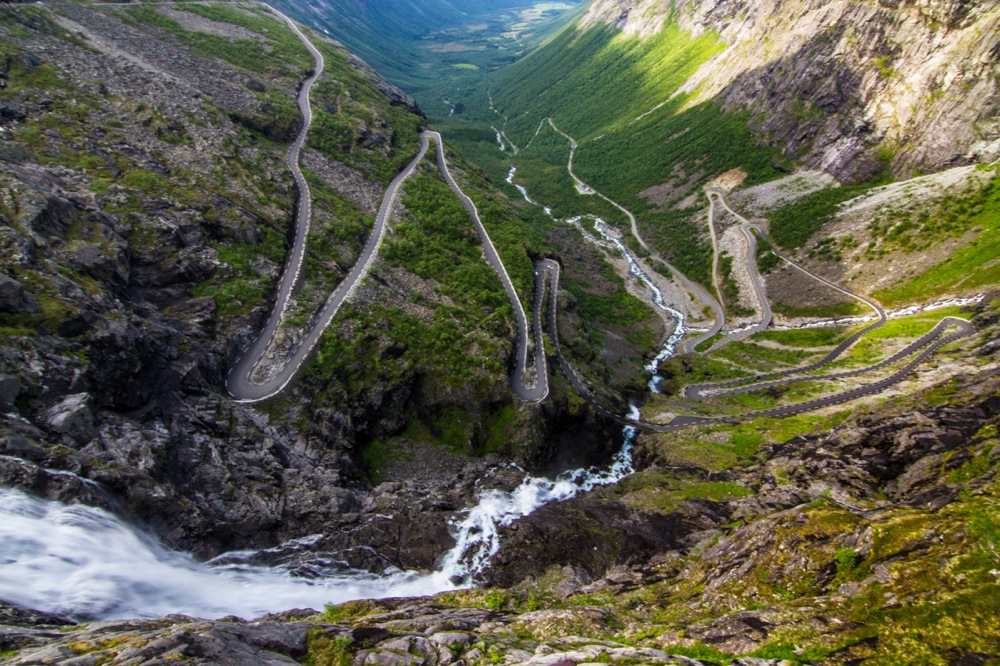 This mountain pass is closed in late autumn and winter and usually opens sometime around mid-May, pending conditions. During the peak of the summer tourist season, about 2,500 vehicles traverse it daily, and it can be a clogged gong-show of tour buses and RVs slogging up the switchbacks. From the top, at the newly completed viewing platforms and museum, the crystal-clear blue water of the Stigfossen drops over 2,800ft to the valley floor.

Extreme SportsKayaking Some of the Best Whitewater on Earth: Fjord Norway

The Trollstigen landscape protection area lies on the border of Rauma and Norddal municipalities. To the west lies the village of Vallda, famous for its strawberries, river rafting, and being a jump-off point to the great Geirangerfjord. 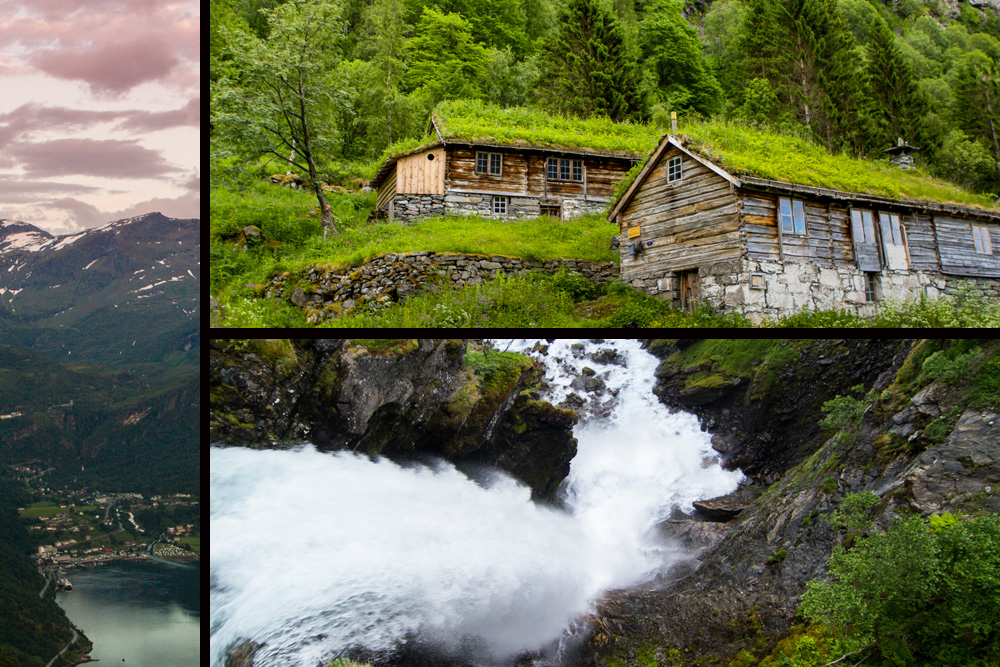 The last bend in the arm of the Geirangerfjord provides the stunning setting for the small town of Geiranger at its tip. The town and surrounding area have earned the prestigious distinction of being named a UNESCO World Heritage Site. After spending a day wandering the world-class hiking trails among towering waterfalls (the Storsaeterfossen falls is seen above), and up to the ancient farm of Skagefla that clings to the mountainside, it’s easy to see why. 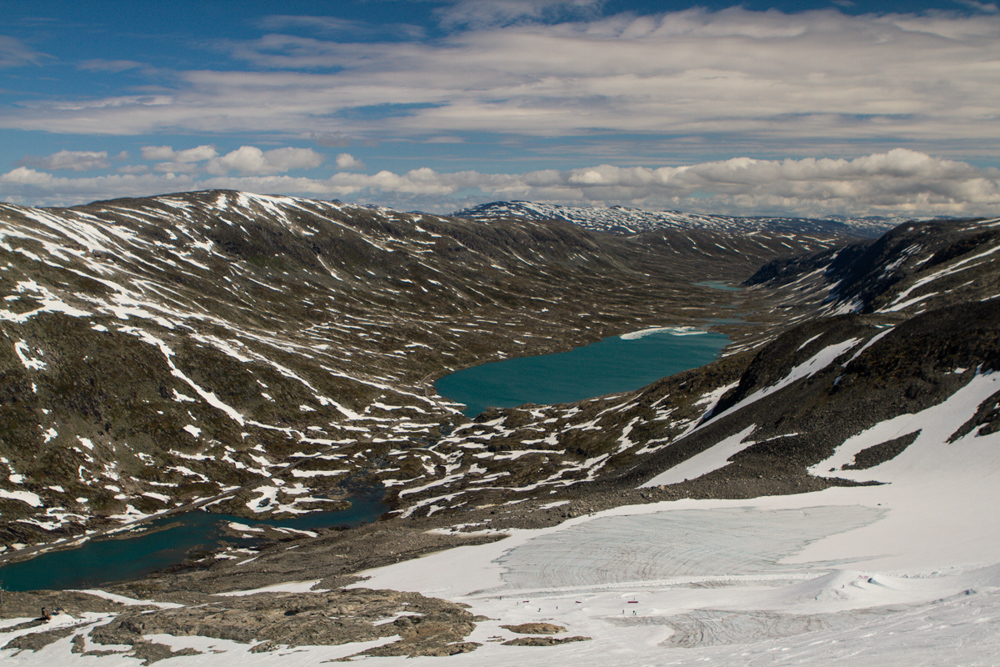 Jumping at the opportunity for a little summertime shred session, I left a cloudy morning in Geiranger only to find socked-in and rainy conditions at the Sommerskisenter. Rather than catching up on much-needed sleep, I decided to go surfing instead (see below). My timing was perfect, as the waves were fun and it cracked blue the next morning, giving me my chance for the snowboarding.

Stryn is a world-renowned Norwegian ski resort and home to local legend Fred Syversen, famous for accidentally launching a 350ft cliff and living to tell the tale. The place was featured in many of the old snowboard videos I grew up watching. 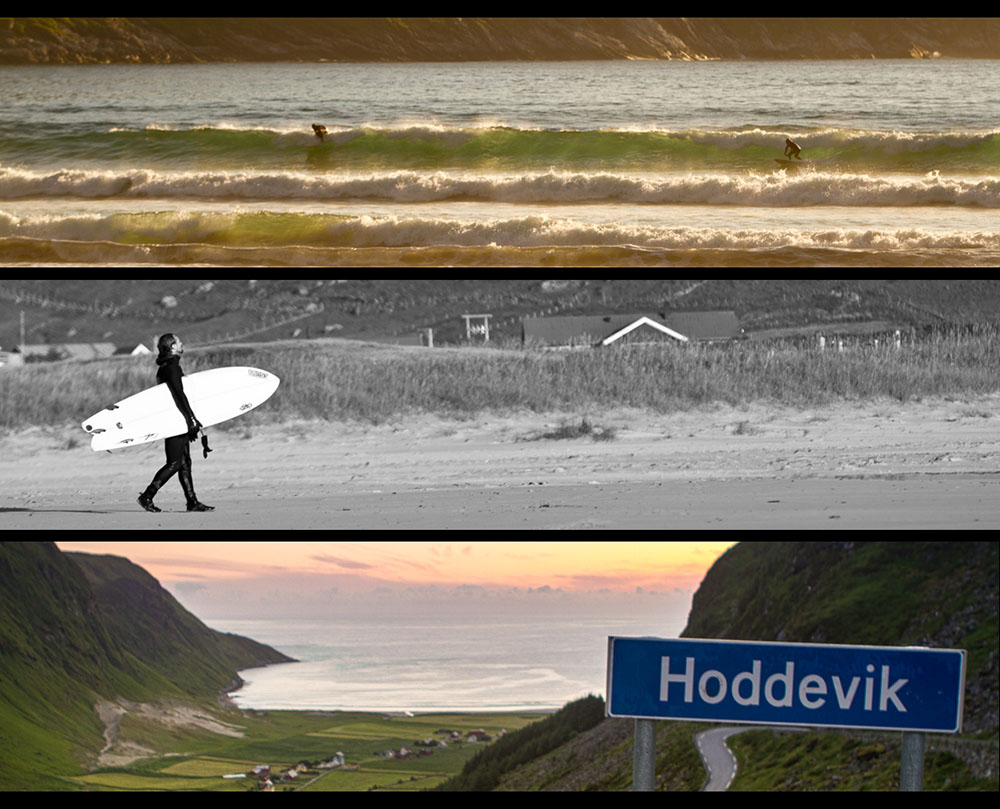 Hoddevik, on the coast of Nordfjord, is one of the three most popular surf spots in Norway. My good friend Trond from Alesund alerted me to the sunshine and swell that was happening at Hoddevik on this evening. I promptly punched it 2.5 hours from the socked-in highlands near Stryn for a midnight-sunset session.

You can rent boards and gear from the family-run surf hostel near the beach, but camping is the way to go at Hoddevik in the summer. The waves were small by the time I arrived at about 9pm, but the light was just getting good. The shot on the bottom in the triptych above was taken around 1am as I reluctantly left the beach and headed back into the mountains. 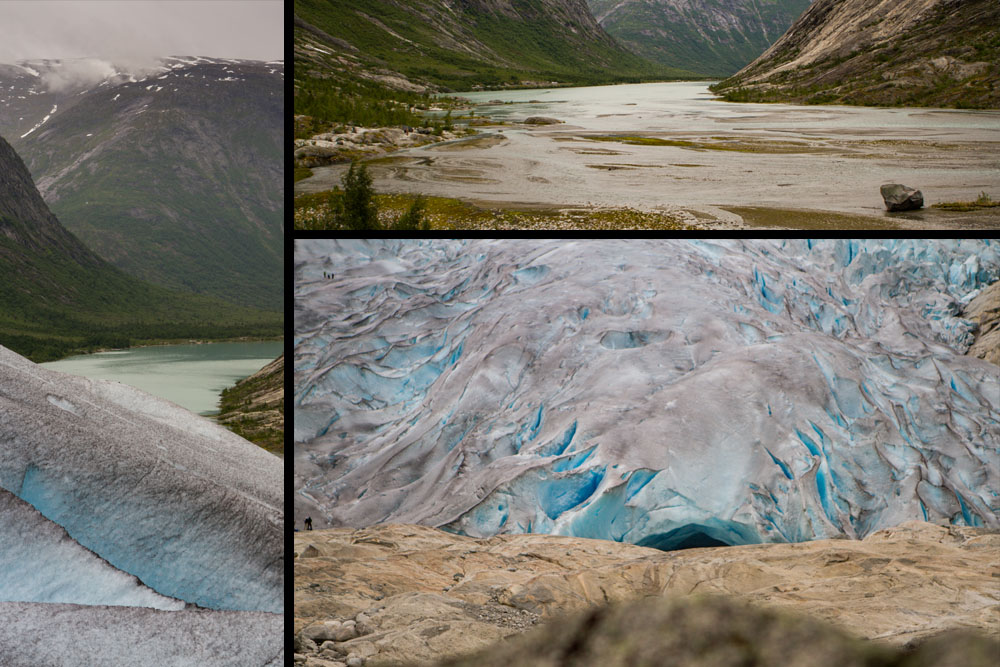 The Nigardsbreen glacier arm in Jostedal County is the life source of the fjords, a living, breathing, constantly moving relic of Norway’s unique geological history. A rainy day on the glacier means the colorful blue ice is far more apparent than during dry, sunny conditions. The mouth of the glacier pumps a cloudy aquamarine flow into the smooth granite channels at the base of this beast.

Glacier travel and ropes courses are available during the summer months, and the brand-new glacier museum at the entrance to Nigardsbreen provides an awesome historical and visual geology lesson.

8. Down days / nights on the Sognefjord 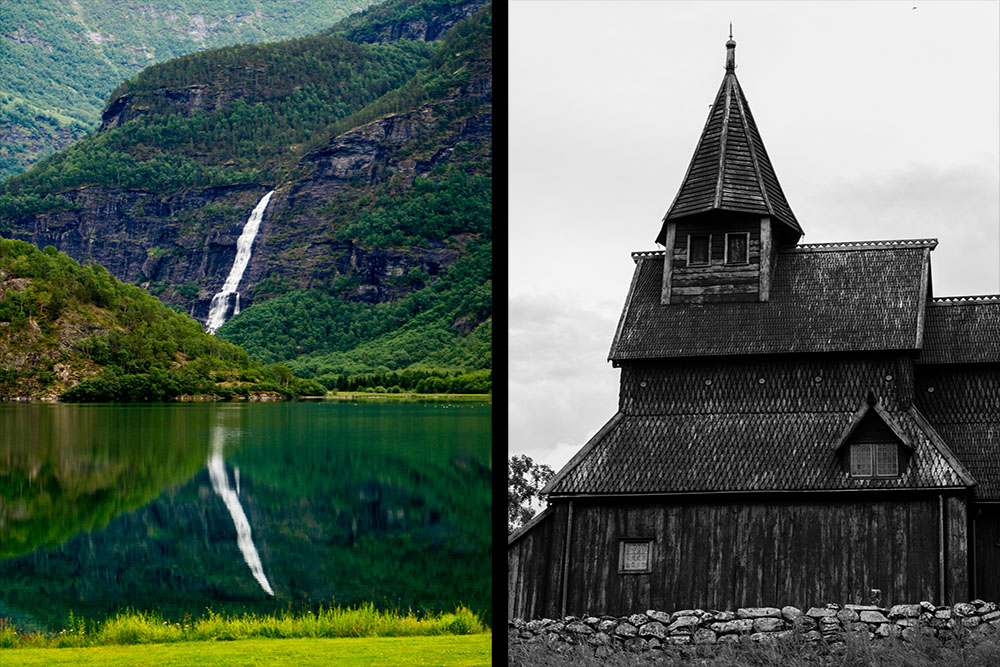 I stayed in the quiet towns of Solvorn and Marifjora, located on the shores of the Lustrafjord, a small arm of Norway’s longest and deepest fjord, the Sognefjord. The mellow days were much needed after a solid week on the run and afforded me the opportunity to check out the Urnes Stave Church (another UNESCO World Heritage Site). It was built around 1130 and is believed to be the oldest of its kind. A short ferry from the Walaker Hotel in Solvorn is the best access to this famed tourist attraction.

9. The beauty in Bergen 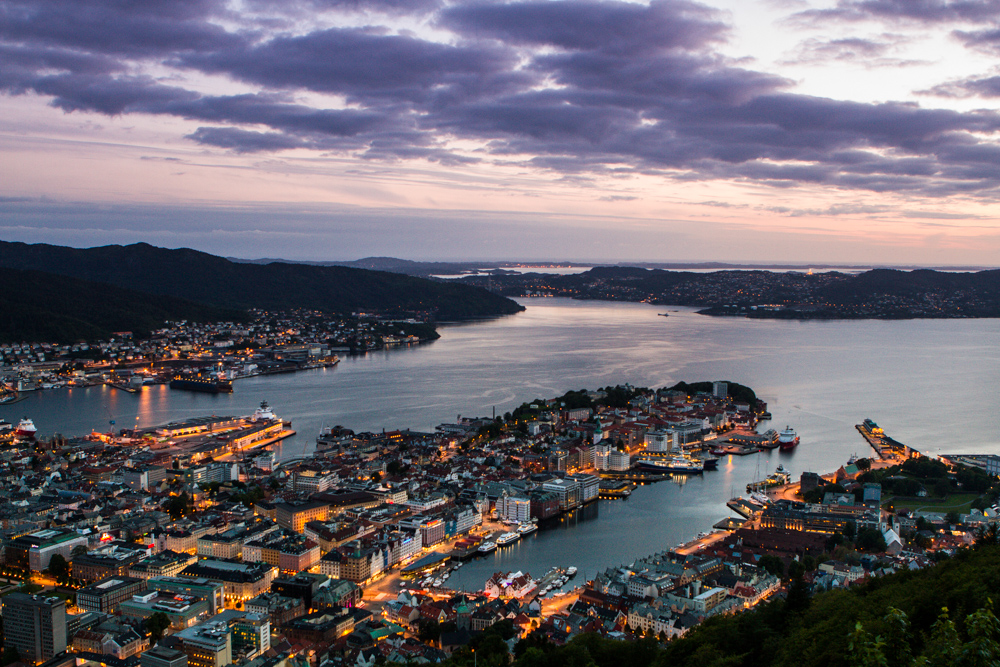 Although I was only in Bergen a couple of hours the night before my flight out, I encountered some of the most beautiful people I’ve ever seen. The end of this article is dedicated to the gorgeous girl from Stavanger whom I sat next to on the Funitel ride up to where this photo was taken — please know that I love you and your wonderful country!

All images and video by author

This post is proudly produced in partnership with Fjord Norway.
Tagged
Outdoor Travel Trip Planning Norway Fjord Norway: In Motion
What did you think of this story?
Meh
Good
Awesome
✖
travelstoke
Download the mobile app
stoked by