IT WASN’T UNTIL my final day in the Outback that I heard the Aboriginal belief that in order to truly understand and appreciate the sense of place and spirituality of Uluru, you have to sit and listen to it — not just Uluru for that matter, but all of nature. As I thought about that and started listening to the land, many of the questions I had about the Outback began to answer themselves, and I felt like for the first that I was connected with that red earth I was standing on.

The Outback, in Australia’s Northern Territory, is a thought-provoking place. The continent’s Aborigines have been living off its resources for nearly 50,000 years. It’s a place that on first glance may look like an arid desert, but the deeper you dig at its surface the more you find. It’s difficult, however, to finger the real Outback: Is it the road trains carrying hundreds of heads of cattle, or the monstrous tour buses that stop at predetermined locations unloading thousands of camera-yielding tourists?

There are just as many different experiences that one can have in the Outback. If you do go, may I make one recommendation…don’t force it. Sit and listen — it’ll give back.

This post is proudly produced in partnership with Travel NT. 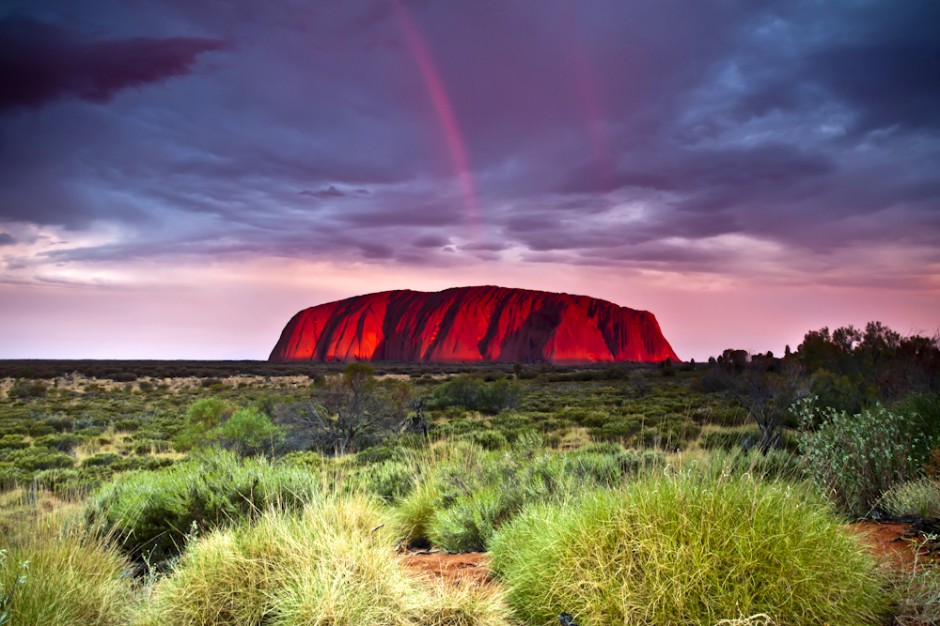 It rained the last day of my trip. I decided to walk to several indigenous sites around the base of Uluru without my camera, trying to feel the site instead of capturing it. After a few hours in the rain, and some silence, I was passing a sacred ceremonial site when I felt a total shift in the weather; the sky was opening. A park ranger and I drove to the top of a hill and saw this. She told me the native Anangu people insist that to truly understand the spirituality of the place, you have to sit and listen to it. Don't take from it. Thankfully, for a few hours we did, and it gave back.

With rock engravings and other spiritual artifacts, Rainbow Valley is an important site for the Southern Arrernte Aboriginal people. One of its natural splendors is how the color of the sandstone rocks shifts continuously as the sun sets on them. Ricky Orr, my native guide, walked me through the entire site and showed various techniques of how his ancestors would use different tools to make food from the local fauna.

Timpilypa, or Music Sticks, are used by both men and women during sacred ceremonies. They are typically crafted out of eucalyptus or mulga wood and then decorated with a burning iron. Snakes or other desert animals are also often created.

It was a magical evening as I sat on the hood of my car and watched for hours as a number of thunderstorms rolled behind Uluru. Each time that a lightning bolt would strike, it would illuminate the silhouette of the rock, which you can see here on the left side of the image.

The Larapinta Trail runs 223km along the spine of the West MacDonnell Ranges, and if you have 22 days to spare, you can hike the whole thing! Unfortunately I didn't, so my tour guides and I opted for the one-day Simpson's Gap route, which was spectacular nonetheless. 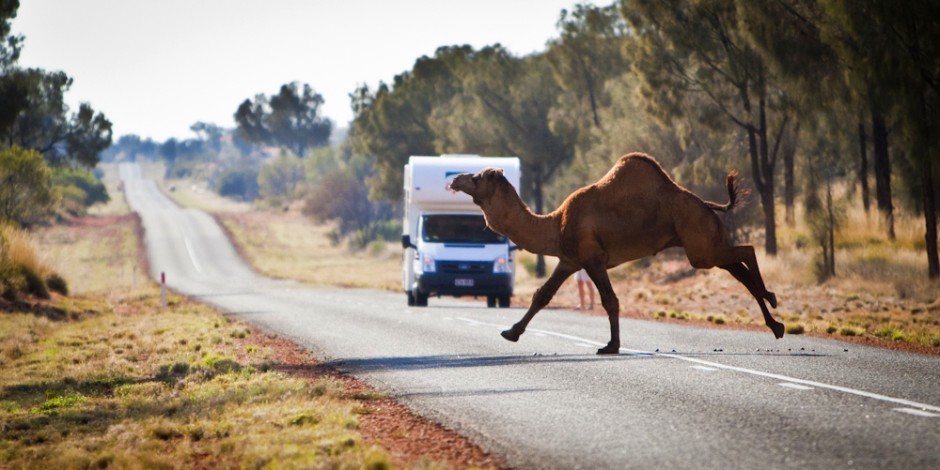 I asked a local Alice Springs man if hitting a kangaroo can really do that much damage to your car, and he responded: "Ah, yeah mate, can do a fair bit, but here in the Outback, it's the wild horse and camels that will kill ya mate. Wait till ya see one of them sprint in front of you, that'll wake ya up." Three days later I did...and after watching a half dozen sprint across the road, I was able to get my camera up just in time to catch the last one. 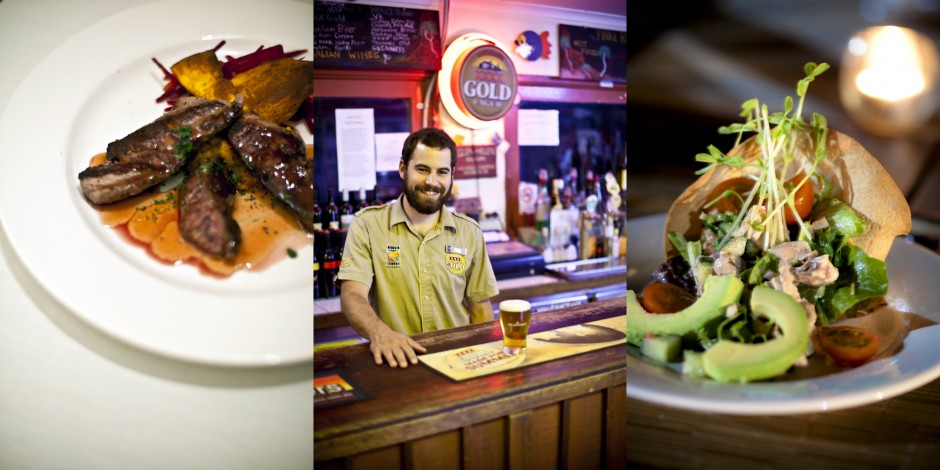 Although there may not be a bustling metropolitan area in the Outback, that doesn't mean there is a shortage of delectable meals to be had. Kangaroo steak, camel, emu, and all sorts of other exotic foods are at your disposal - not to mention how well a cold beer goes down after a 300km drive.

That's how you make a Kali!

Boomerangs, or Kali, are made of branches from the mulga tree, which is a very durable wood and fairly abundant in the Outback. Above, you can see Rollie Mintuma, an Aboriginal Anangu man, carve away at the mulga as he creates a boomerang. Shields were used the same way we use passports today. Men would travel around, and the markings on their shields would represent where they were from and where they'd been. 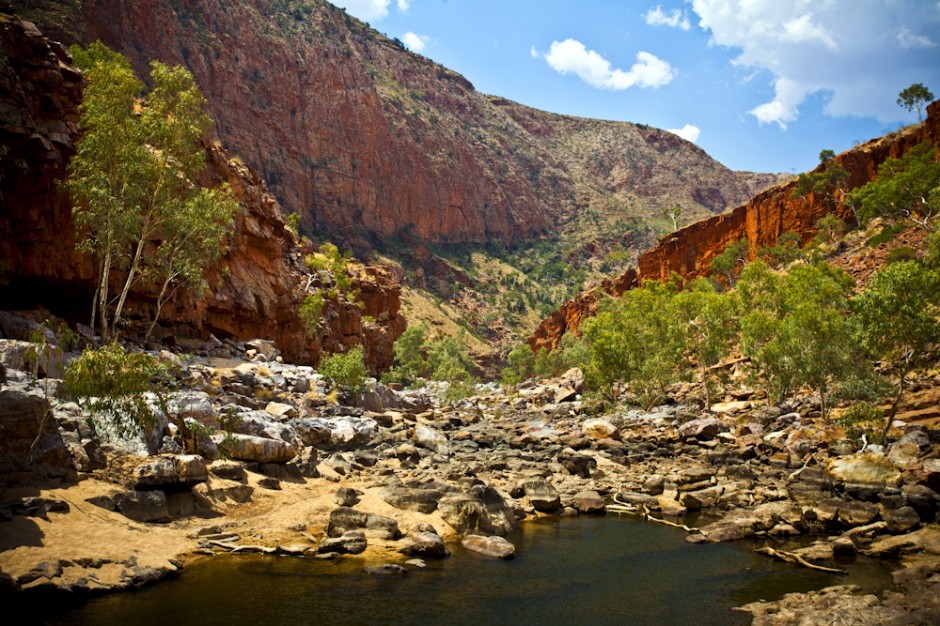 I was surprised by the amount of water I came across in the Outback. I had a vision of this completely barren land, parched by the unrelenting sun, but instead I found various places like Ormiston Gorge. The gorge is lined with ghost gum trees whose white trunks create a stark contrast against the red rock of the canyon walls. Ormiston Gorge is a popular hiking spot and a great place to take a swim to help beat the heat. 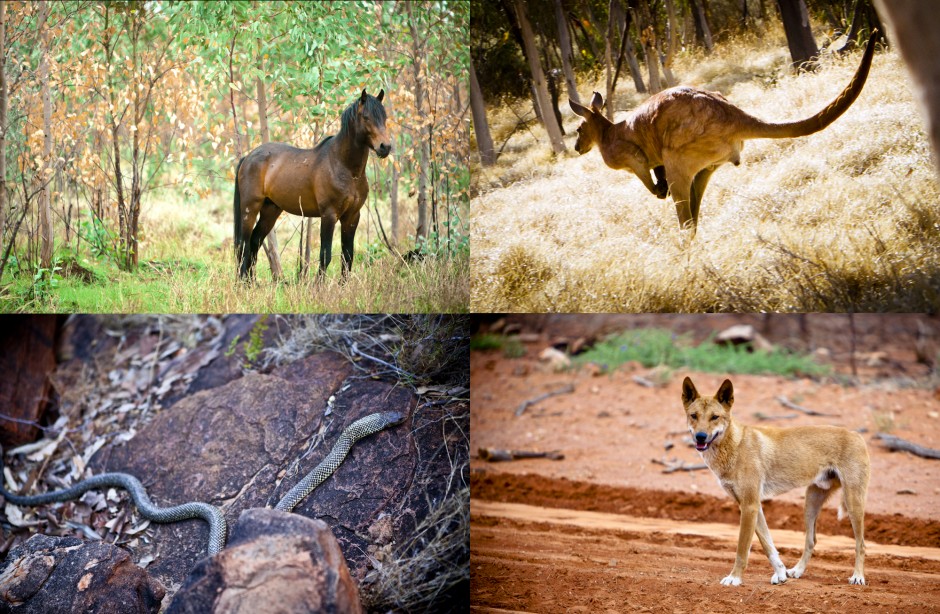 Again, when you first look out over the vast land that is the Northern Territory, you might not think there's a lot of life out there. But as you spend more time in the Outback, slowly you begin to see how alive the place actually is. Wild horses, kangaroos, dingos, some of the world's deadliest snakes, and an assortment of other animals all call this place home. 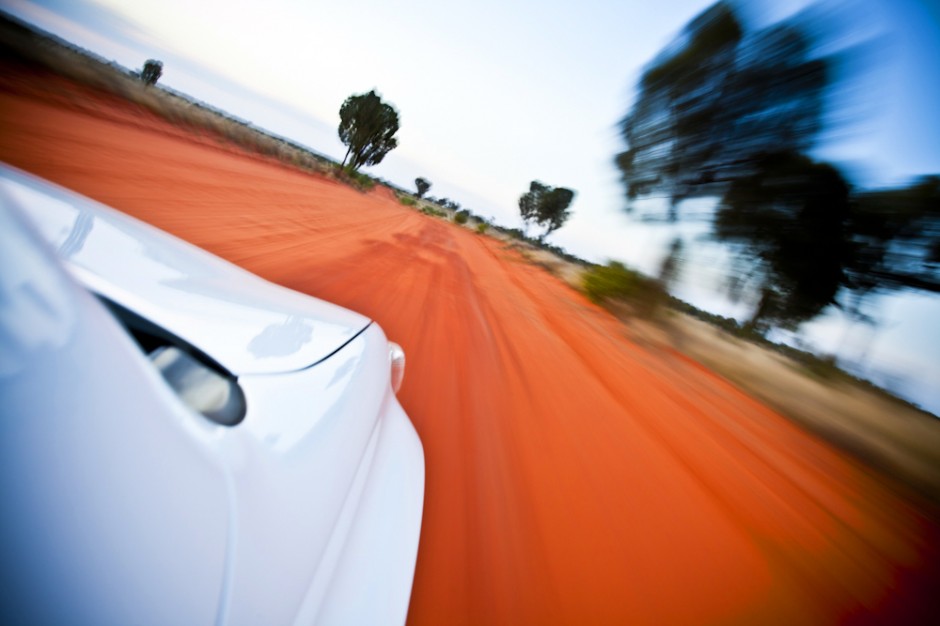 They don't call it the red center for nothing. As I zipped across these powdery red sand dunes in my 4x4, I couldn't help but take a picture of what felt like, to me, driving over playful lava. 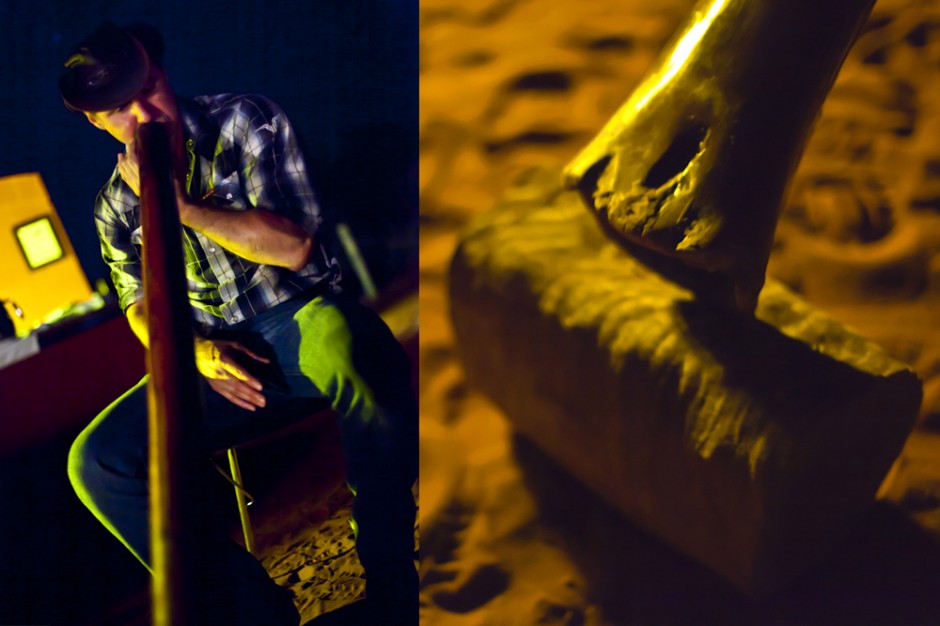 After spending about a week in the Outback and failing to see a Didgeridoo, I started to wonder what the deal was. Later, I found out that, contrary to popular belief, only a few Aboringinal communities towards the top of the Northern Territories actually use Didgeridoos in their ceremonies...unless you find yourself at a dinner with a bunch of tourists.

Aboriginal paintings are individual representations of the stories that have been passed down from generation to generation. Depending on the story or who is the traditional carrier of the story, the painting will take on different shapes.

Cattle stations dot the Outback and sometimes can be a hundred kilometers from their nearest neighbor. At the Bond Springs Cattle Ranch, you can still see the equipment that has been used there for decades. Along with the gear, there's the schoolhouse where children were educated via radio. Students were taught by teachers based in Alice Springs by The School of Air, which still operates today.

Lee was my guide at Cave Hill, which has cave paintings that are believed to have been painted 22,000 years ago and is considered to be Central Australia's most important indigenous art site. As we made our way around the cave and Lee told me the story of the seven sisters, he made one comment in particular that left a lasting impression. We spoke about Western society and where it's going, and he said to me, "People seem to have forgotten that you don't need money to live. My people did it for 50,000 years!"

Khan, named for Genghis Khan, was my friendly camel who escorted me around Uluru on a lovely sunset tour. I had no idea, but there are close to two million wild camels in Australia. I haven't had a lot of interaction with camels, so it was interesting to learn about how witty they are and how, unlike horses, they are extremely difficult to frighten.

Kata Tjuta, or the Olgas as it's also known, is a geographic formation comprised of some 36 domes which sit 25km to the east of Uluru. It is sometimes neglected by tourists but is actually more spiritually significant than Uluru. 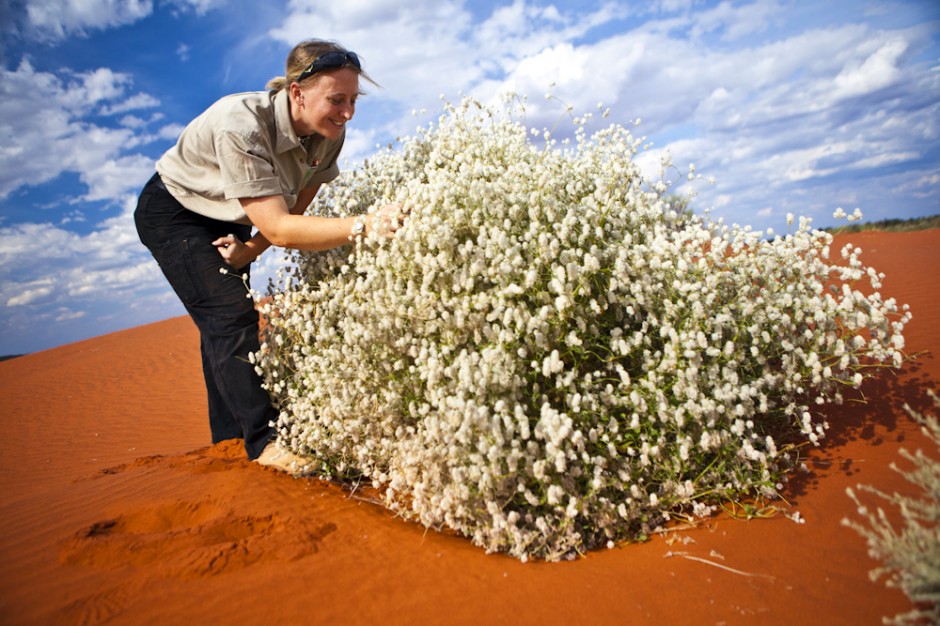 Thanks to a heavy amount of rain earlier in the year, this spring's wildflower bloom was much more active than normal. Everywhere you turned, you could see small splashes of color decorating the desert floor. Page, my tour guide, checks out this beautiful plant which had a small fluffy white flower on it and created a beautiful clash of colors against the red sand. 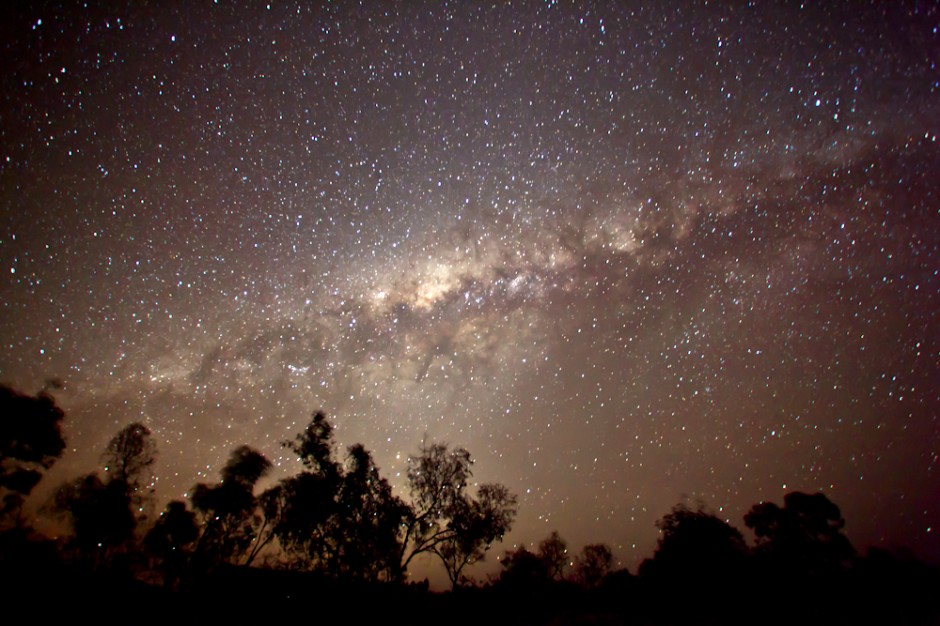 The sky is so clear in the Outback that you can actually see the Milky Way with your naked eye. I've been fortunate enough to do some great stargazing in beautiful places around the world, but the memory of the night I took this photo will last forever. After finishing off my kangaroo steaks that Bob Taylor made with his bush tucker skills, I sat back in awe and watched nature's light show. 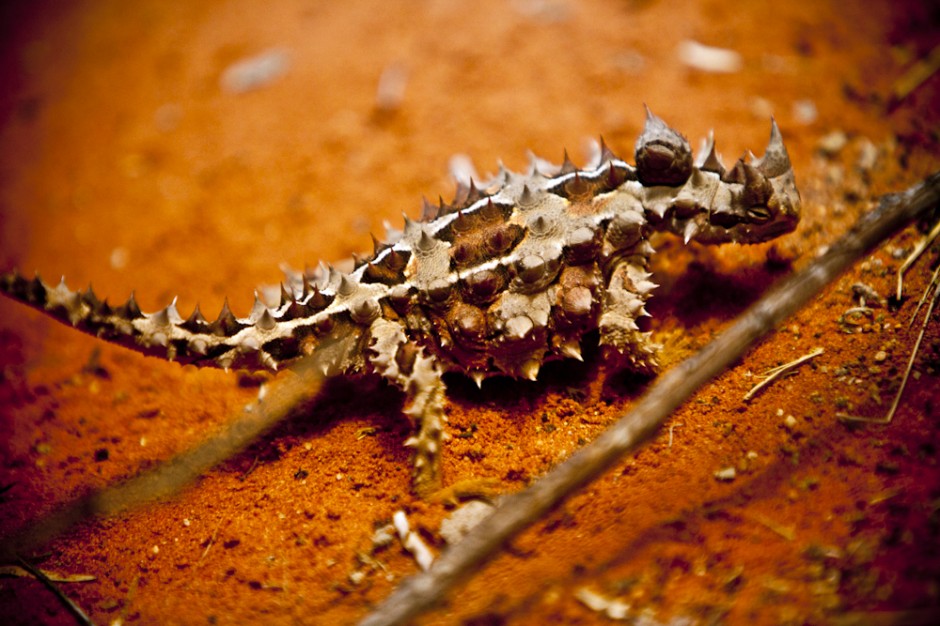 The thorny devil is a species of lizard that is indigenous to Australia. If you look closely, you can see that it has a false head on its neck, and when it feels threatened, it buries its head and uses the decoy to confuse predators.

There is no shortage of activities in the Outback. If quad bike riding at Kings Creek Station, helicopter rides, or camel safari into the desert is what you seek, look no further.

The pure size of Uluru is striking the first time you see it, and even more so when seen from the air. Uluru means "the meeting place," and you can see why from above - it dominates the entire landscape for hundreds of kilometers.

The Outback is a big place and has a lot to offer. If adventure or possibly a little personal reflection is what you desire, make your way to the Northern Territory.

Tagged
Hiking Insider Guides Australia: Wild
What did you think of this story?
Meh
Good
Awesome
✖
travelstoke
Download the mobile app
stoked by