BOMB-DODGING is still a big part of travel here. So is the tangible fear that blankets the country. Foreigners, moving on the highways that join southern Arab Iraq with the northern autonomous Kurdish region chance roadside bombs and, more likely, incarceration and a beating by Iraqi authorities on the lookout for al-Queda, for the threat, for anything suspicious.

That said, it’s all worth seeing. Even the war-torn Baghdad Zoo. Find the right fixer. Skirt the roads. Fly between cities. Make a friend at one of the non-governmental organizations on the ground or get credentialed and embed with a military unit for a while if journalism is something…you can certify…you do.

When you get to the zoo, don’t forget to bribe one of the attendants to walk you into the monkey pen. The monkeys speak a little Arabic. Say “Salam Sadeeki” (hello friend) and one might shake your hand.

All photos by Daniel C. Britt. 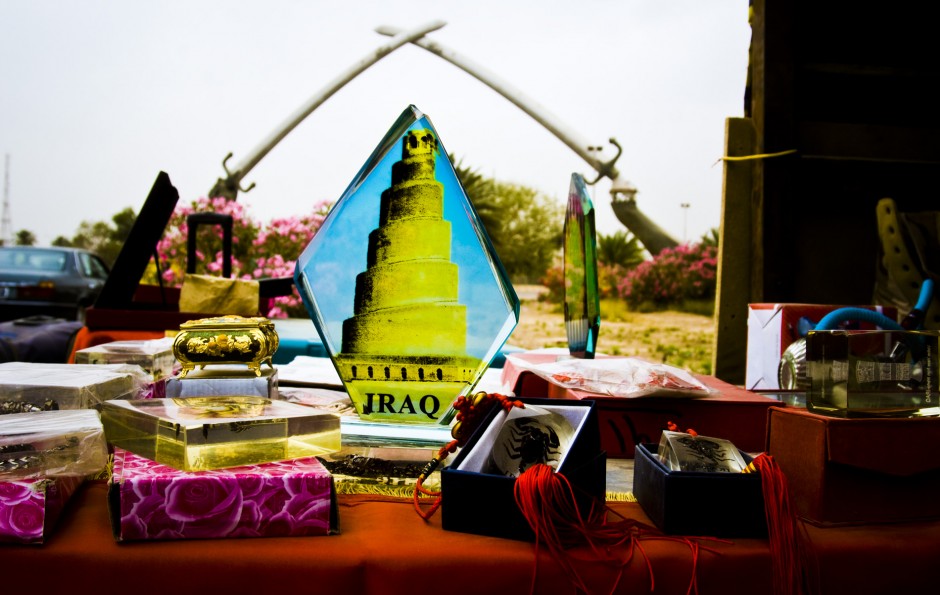 A traveling souvenir vendor set up shop near the Crossed Sabres monument in central Baghdad's International Zone about three miles from the American embassy. The Sabres monument, also known as the Victory Arch and the Swords of Qadasiyah, mark the entrance to the parade grounds opened in 1989 to celebrate former dictator Saddam Hussien's victory in the Iran-Iraq war. Most historians consider the war to have ended in a stalemate but that didn't stop Saddam from ordering the helmets of dead Iranian soldiers to be cemented into the ground at the base of each giant hand. 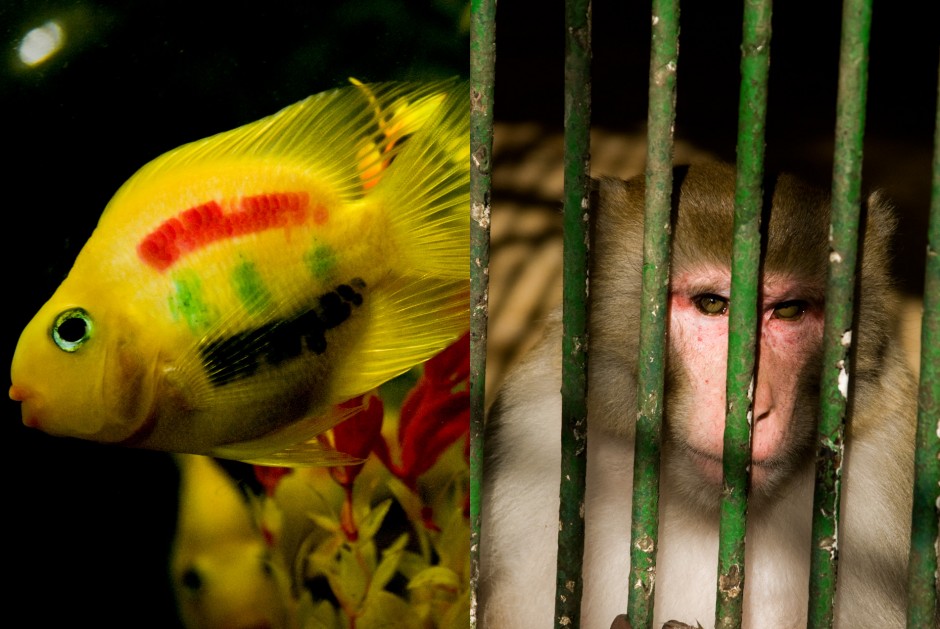 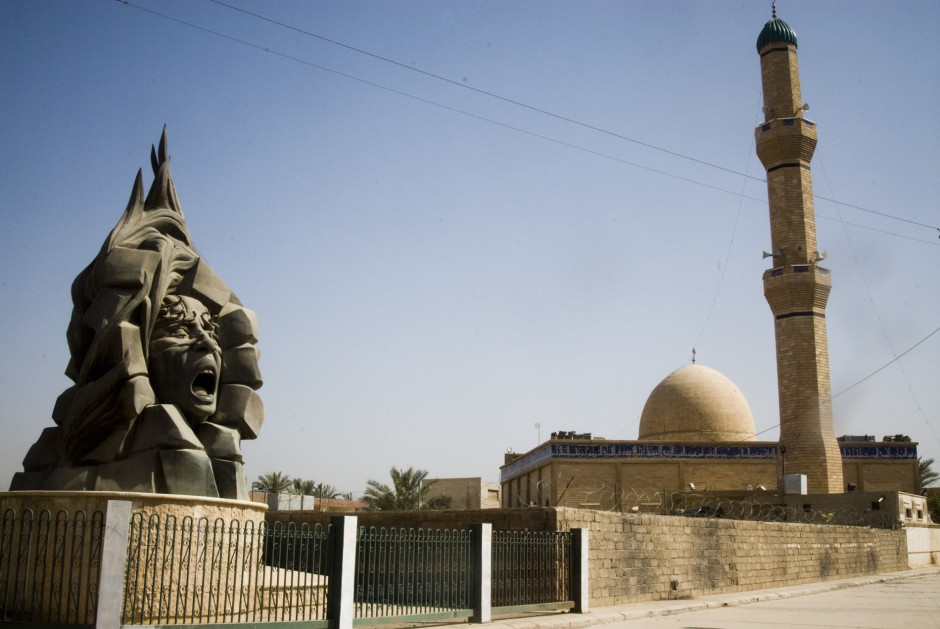 Statue of the Screaming Lady

The Statue of the Screaming Lady was erected near the main mosque in Baghdad's Amiriyah district as a memorial to the 408 Iraqi civilians who died in a nearby bomb shelter on February 13, 1991 during a United States Air Force attack. Mistaken for a military hub, Public Shelter No. 25 was packed with women and young children when it was hit with two laser-guided smart bombs. The bombing is perhaps the worst civilian massacre of the Gulf War. 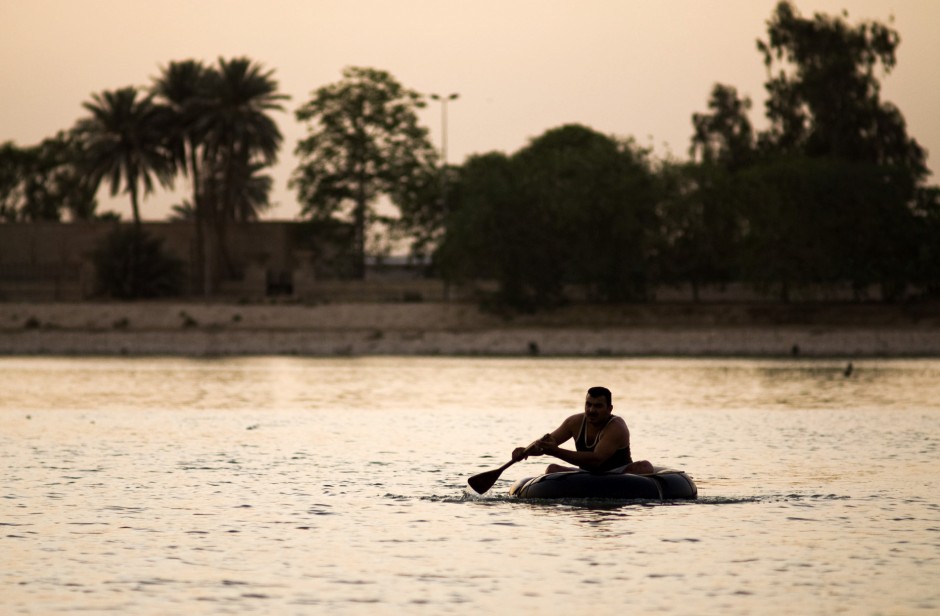 A Baghdad man paddles across the Tigris River in an inner tube Saturday, May 16, 2009. With a makeshift paddle and an inner tube you can escape the heat like hundreds of locals who launch into the river from the shore beneath the Fourth of July Bridge. 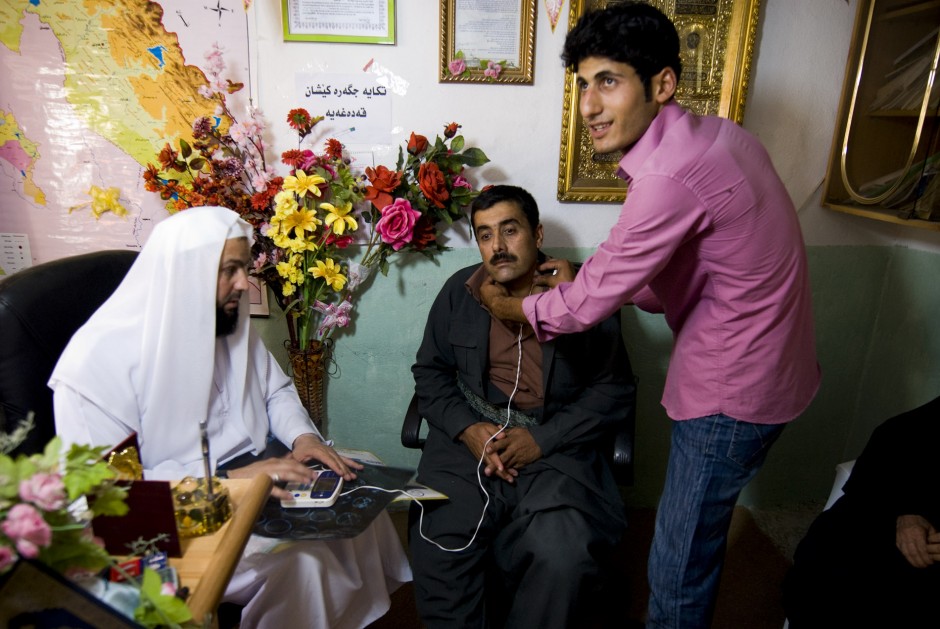 Mullah Ali uses electro-shock therapy to diagnose a patient in his compound in the town of Kalack outside of Erbil in Northern Iraq's Kurdish region Sunday, July 4, 2010. If the patient's muscles tense, Ali considers him ill and prescribes a combination of prayer and pills. His assistants may also beat the patient's feet with a piece of wood to knock the "jin," or evil spirit, from their body, out the top of their heads. The popular Mullah claims to have cured his followers of AIDS, mad cow disease, and cancer. 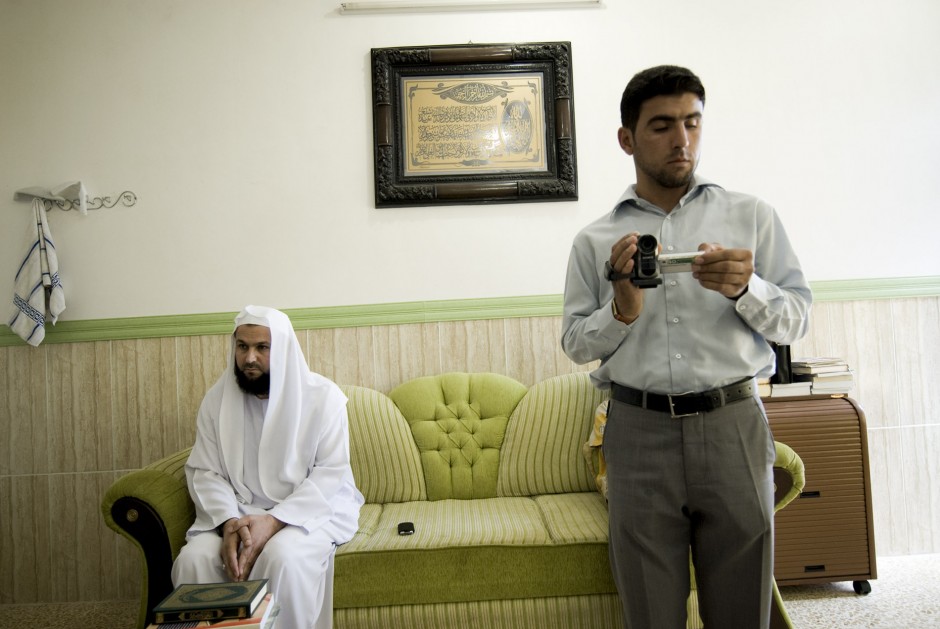 Mullah Ali's staff will also record your visit for his next DVD, chronicling his successes as an Islamic faith-healer. A collection of the Mullah's DVDs are on sale at the door. 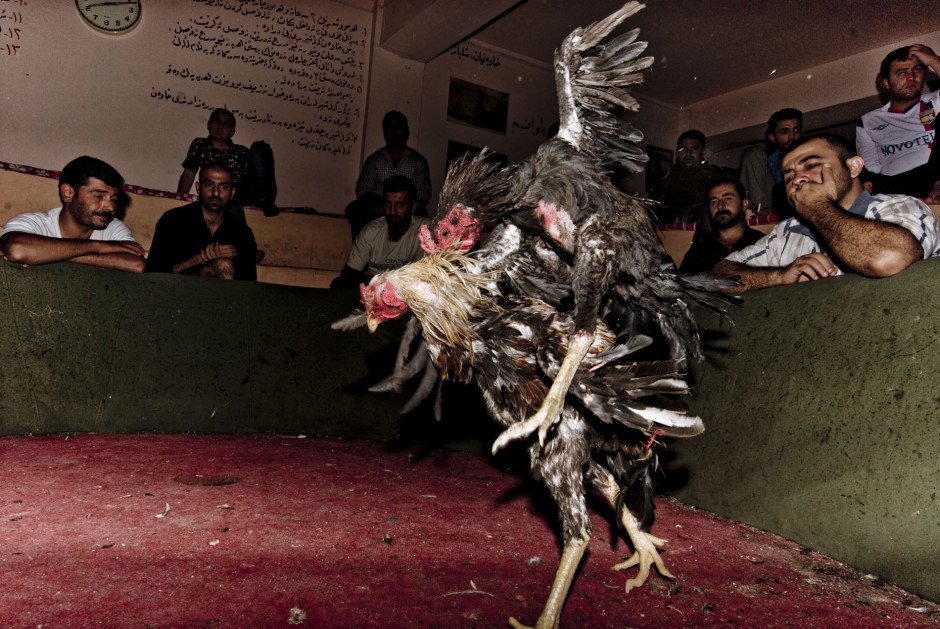 Two cocks fight to the death while Kurdish men place bets on a winner at the Tea House in Sulaymania Sunday, September 5, 2010. The sport has grown in popularity in northern Iraq over the last year, occurring regularly in Erbil, Sulaymania, and Kirkuk. Some contest pots total over 7,000 dollars. Coaches prepare a cock for battle by lifting its tail feathers and spitting a stream of cold water into its butt. Sadly, I don't have a photo of that, but it had to be said. 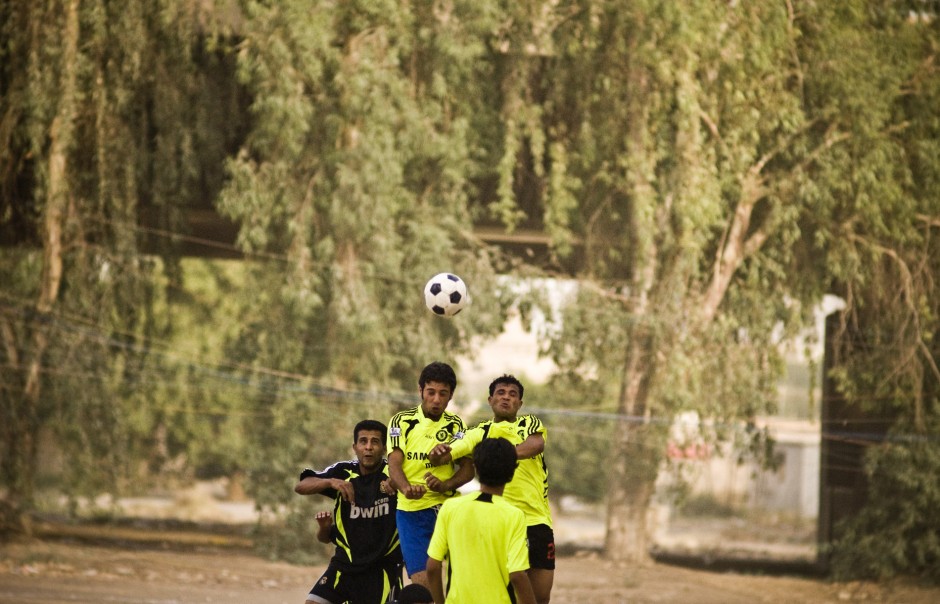 Catch a soccer game every night of the week after 5 p.m. on Aaras Island, the Tigris River Island located directly below the Jahadriyah Bridge in Baghdad. Teams from each city district take over all three of the island's dusty fields, sometimes playing two or three games in one evening. Sadr City players, pictured above in yellow, overtake a member of the Kerrada team for a headball in August of 2009. On the sidelines local kids, belonging to the displaced families that have taken refuge on the island, sell ice cream and sodas -- three for a dollar. 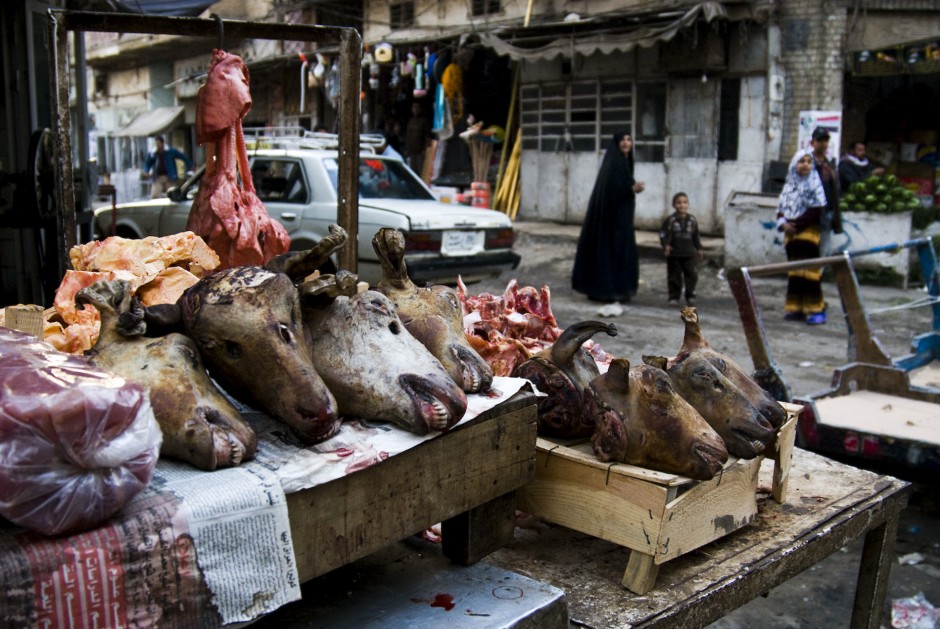 Cross Heifa Street and head toward the Tigris River to find the meat section of Baghdad's outdoor Alawi Market. There, a variety of dried sheep's heads, the main ingredient in a traditional Iraqi soup, wait to be kissed on the mouth and boiled until the brains soften up. With its narrow streets and shadowy shops, Alawi is one of the capital's most authentic-feeling marketplaces, but the threat of violence and kidnappings generally keeps it closed off to foreigners. A good fixer and decent Arabic is a must for this shopping trip. 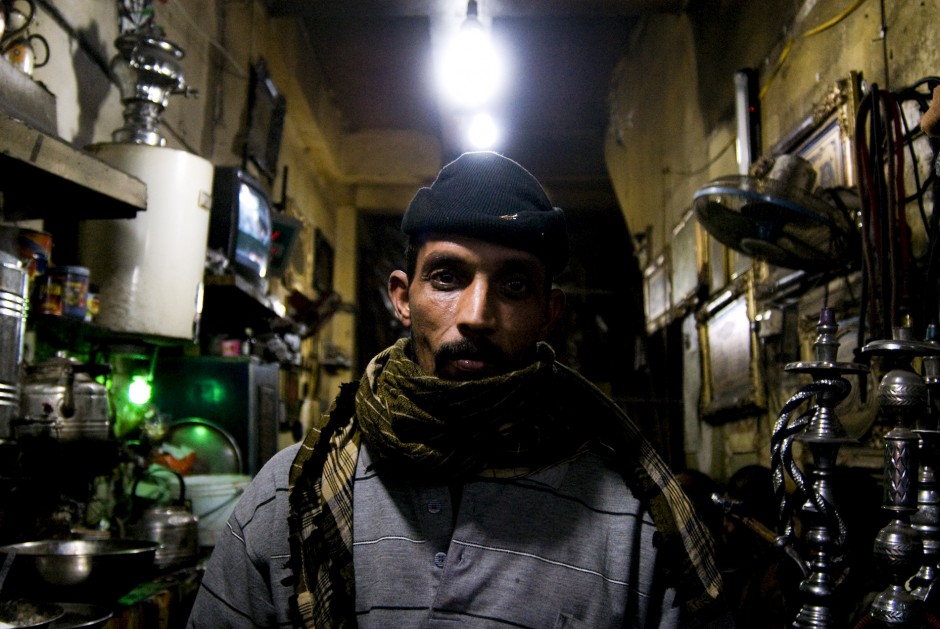 If you can get past this guy, you'll gain entrance to the Alawi Market's grungiest, signless hookah bar. It's located right across from the dried sheep heads, within the rat's maze of narrow alleys that occupy the area between the government buildings on Hiefa Street and the Tigris River. 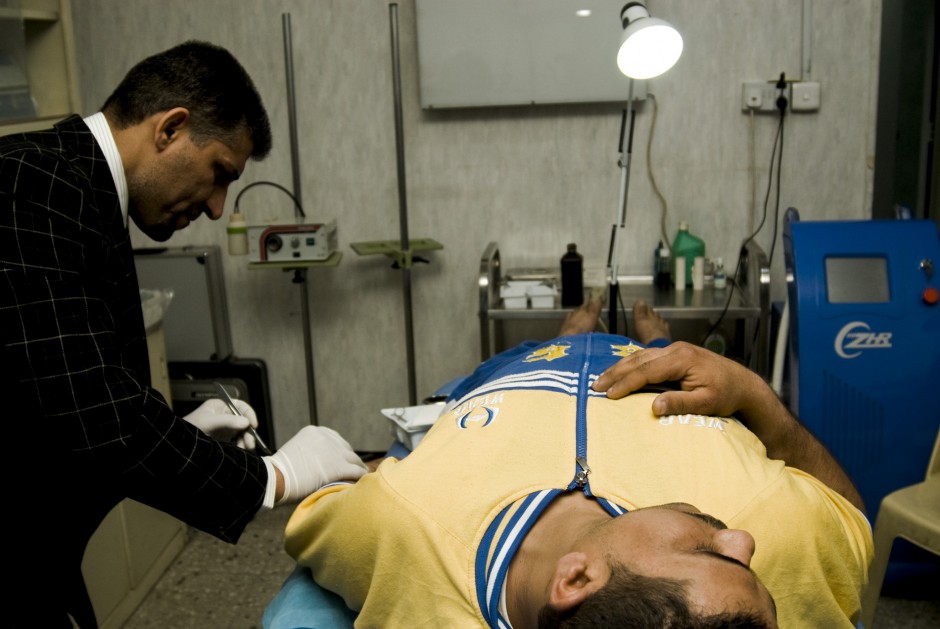 Have a Tumor Removed

The small New Baghdad Clinic is located on the second floor of the New Baghdad Shopping Center just outside the International Zone in the capital's New Baghdad district. Surgeon Dr. Hamed Jaasim routinely carves fig-sized tumors from patients' arms. He also does laser hair removal. Both procedures cost between 20 and 40 dollars. 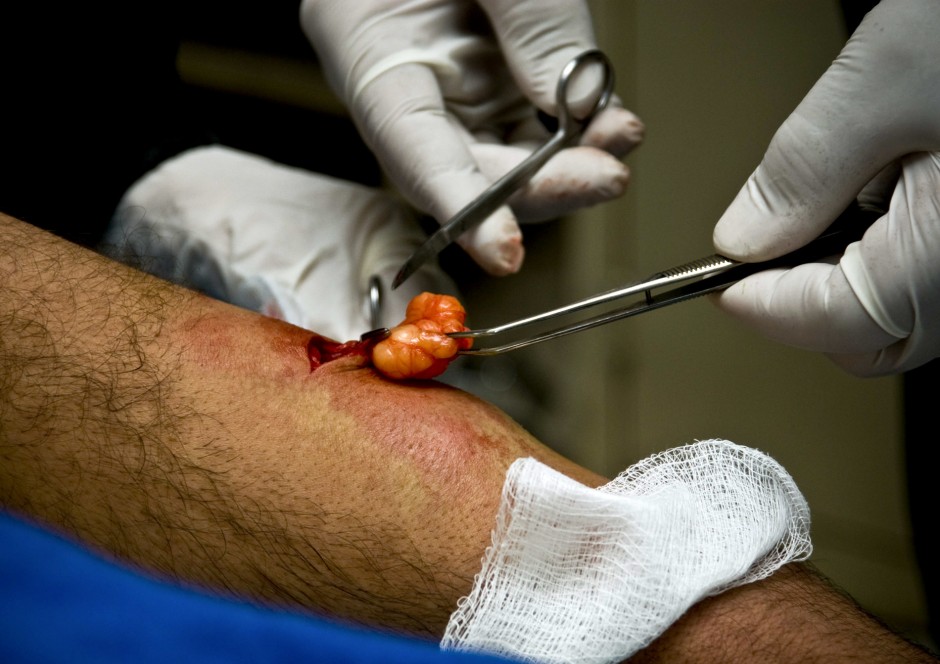 I Wasn't Kidding About the Tumors 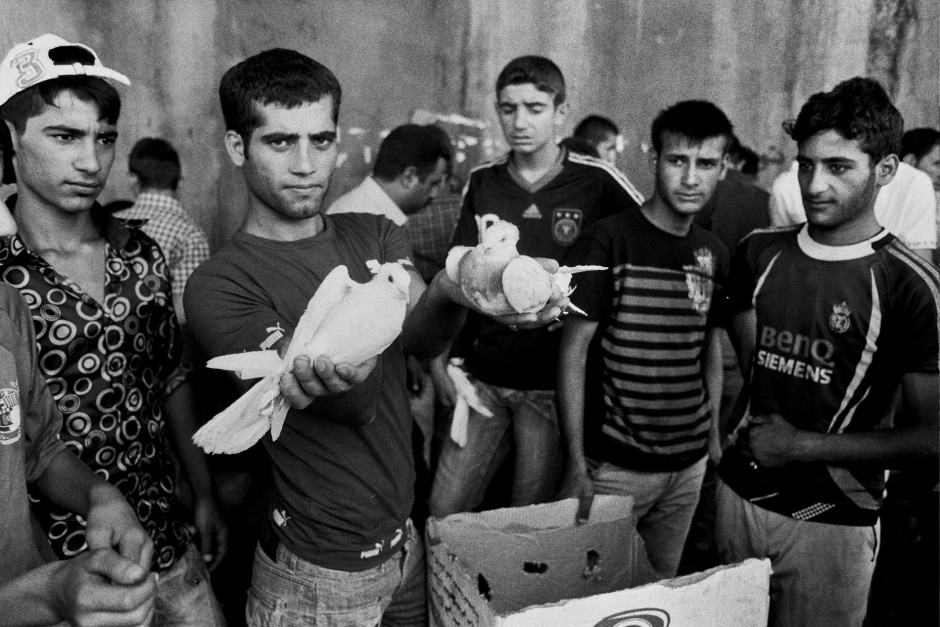 The Zahko animal market draws hundreds every Sunday before noon to the sheep-slaughtering area on the west side of town. Messenger pigeons like those in the photo above are hot items along with turkeys, dogs, fighting dogs, sheep, and fighting sheep. 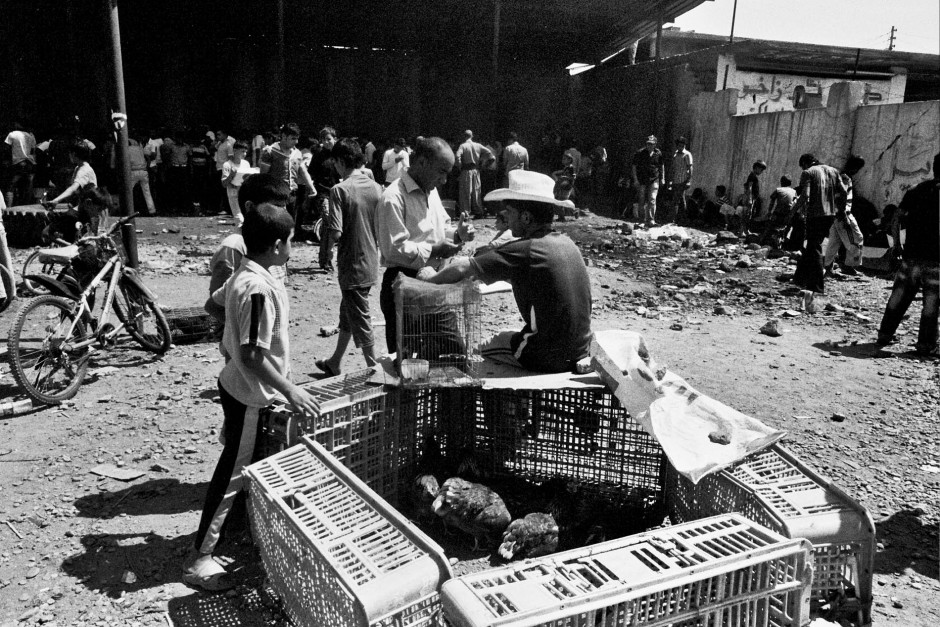 A cowboy hat, T-shirt, and track pants is the official uniform of the Zahko animal market. The track pants and T-shirt alone will do in most other areas. 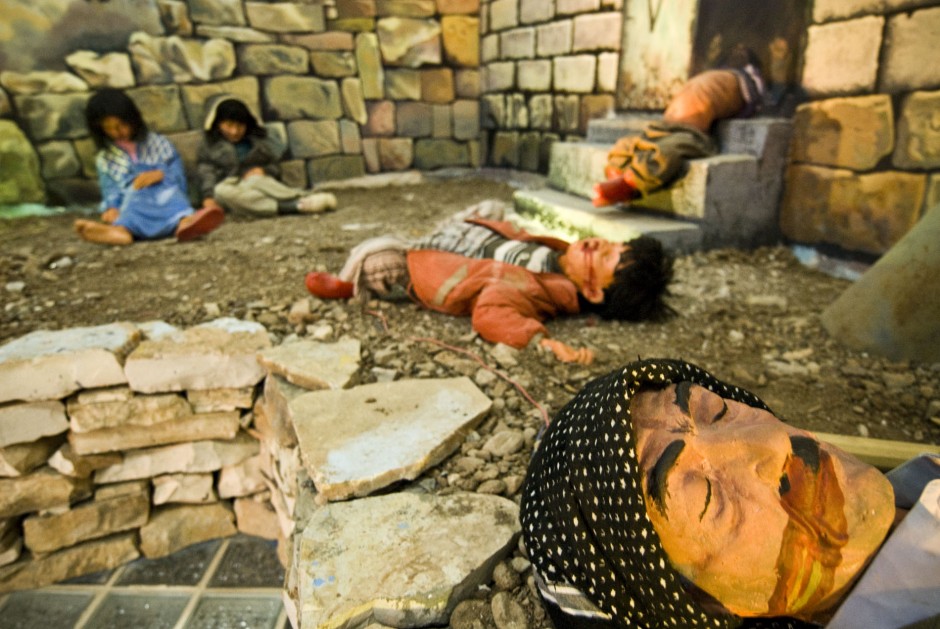 Halabja Monument to the Victims of the Gas Massacre

Wax bodies lay strewn in one of many installations within the black marble memorial located on the outskirts of the farming town of Halabja. Fearing Kurdish separatist activity, former Iraqi dictator Saddam Hussein unleashed Sarin gas on Halabja on March 16, 1988. The strike killed over 5,000 men, women, and children in a matter of hours. 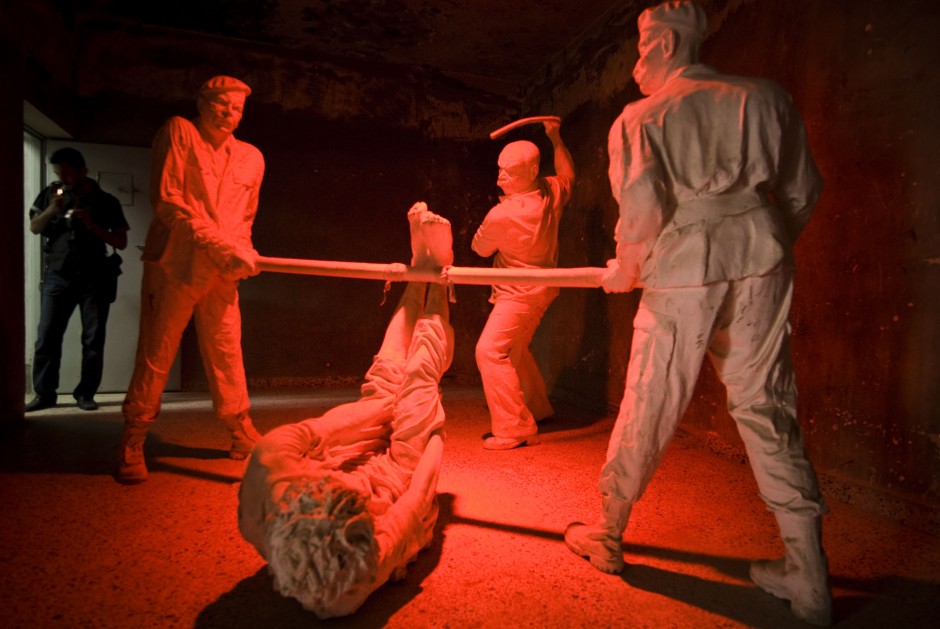 A man lights a cigarette behind one of the plaster scenes depicting forms of torture practiced under former Iraqi dictator Saddam Hussein Friday, August 27, 2010. 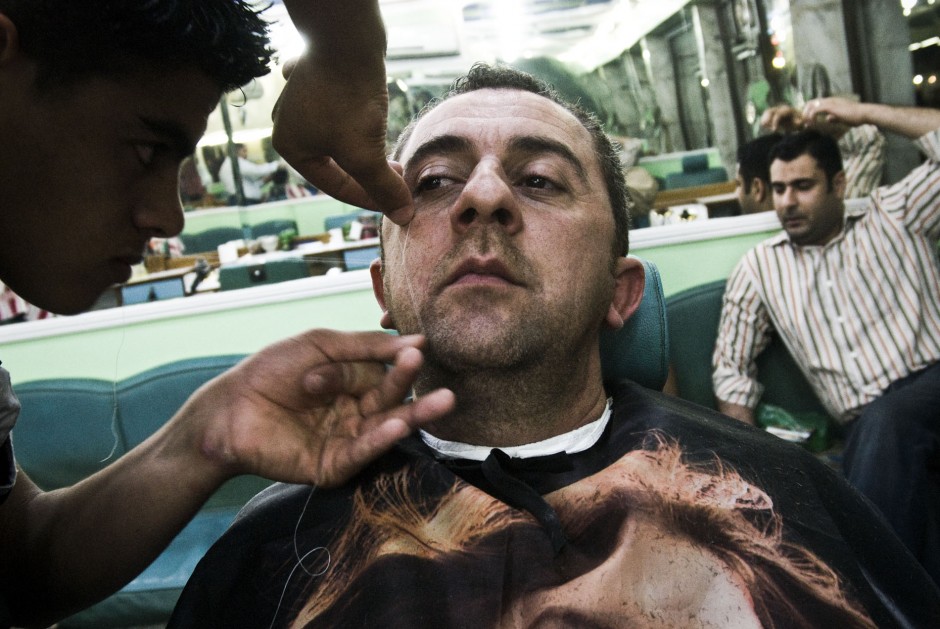 Isaac Raza gets his aberrant cheek whiskers plucked out by a teenaged boy manuvering a piece of string between his thumbs and front teeth Sunday, April 5, 2009. Don't forget, salons here are for men. Of course, getting twined can be awkwardly homoerotic for westerners, but wearing a precisely groomed half-beard is a great way to blend in Baghdad.

Tagged
Trip Planning Iraq
What did you think of this story?
Meh
Good
Awesome

This was my experience visiting a Syrian refugee camp in Iraq

In 1977 my dad left to work as a locksmith in Iraq, here’s what his journey has taught me

Notes Going Overland from Iraq through Iran into Afghanistan

Dispatches From One Tuesday In Iraq

What Happened to Babylon?

How to: Travel to Iraq without getting killed