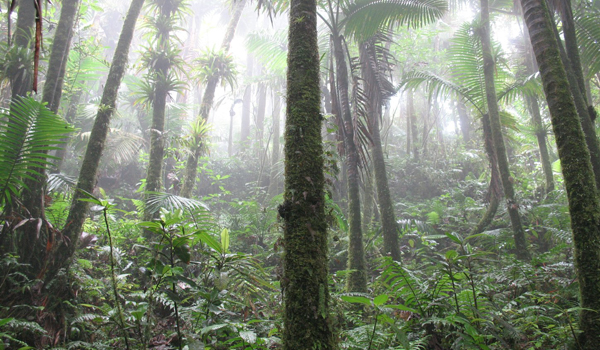 .
Mountainous Puerto Rico hides stunning diversity. If you want to get off the tourist trail, bring a backpack and boots, and leave the snorkel at home. The wilderness preserves offer a completely different side of the Isla del Encanto.

While the following parks are on opposite corners of the island, driving from one to the other doesn’t take more than a few hours. Renting a car is the way to go due to a distinct lack of public transportation.

Budget accommodation is also difficult to come by. However, in the spirit of immersing yourself in Puerto Rico’s natural wonders, consider pitching a tent. Public campgrounds are widespread, affordable, and well cared for. There are also private campgrounds, although some are open only to RVs.

The Departamento de Recursos Naturales y Ambientales (Department of Natural Resources and Environment) is in charge of most campgrounds located within parks and reserves. These are cheap, but may require advance reservations.

To camp on the beach, go through Compañia de Parques Nacionales (National Parks Company), which runs several balnearios (seaside camping and recreation complexes) around the island.

Both websites above are in Spanish only. For camping information in English, check out these resources:

You might see safety warnings associated with some campgrounds, but only those closest to San Juan. That said, camping outside of designated areas is not recommended, and wherever you are, it’s never wise to leave valuables in your tent.

If money is less of an issue, numerous hotels and resorts cater to mid-range and luxury budgets. For eco-friendly options, as well as general tips for green travel on the island, check out Julie Schwietert’s Green Guide to Puerto Rico.

With temperature and precipitation relatively constant, the main climate factor to watch for when planning a trip is hurricane season. September and October are the riskiest months to visit, but that being said, the last big hurricane to affect Puerto Rico was in 1998. In addition, your camping options may be more limited outside of the summer months. 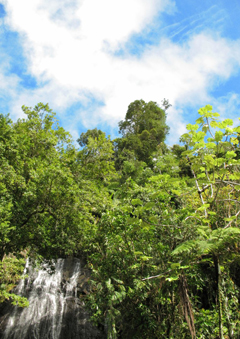 While only an hour from downtown San Juan and firmly on the tourist track, the tropical rainforest of El Yunque, also known as the Caribbean National Forest, is a must-see.

El Yunque contains four distinct forest zones, defined by elevation, each with its own unique mix of flora and fauna.

Most visitors come on package tours, which don’t leave them nearly enough time to explore the area. On your own, however, it’s easy to lose the crowds.

Make sure to take advantage of El Portal Visitors Center on your way into the park. The nominal admission fee gives you access to a plethora of informational displays as well as short paths through the surrounding forest.

The Palo Colorado Visitors Center, near the end of Highway 191, is where most of the main hiking routes begin.

Trails range from easy to intense and a hike will allow you to take in a variety of sights, including waterfalls, swimming holes, lookout towers, and mountain peaks. The Trailwinds and El Toro trails are long enough to stretch into an overnight trek.

Camping in El Yunque is absolutely free, but you’ll need to pick up a permit beforehand at the Catalina Work Center (also on Highway 191). There are no designated sites or facilities beyond the visitor centers, so make sure to pack as much food and water as you’ll need, and be prepared for rain.

Other accommodations, including two balnearios, stretch north of the park from Río Grande to Fajardo. Naguabo, to the south, has a few as well. 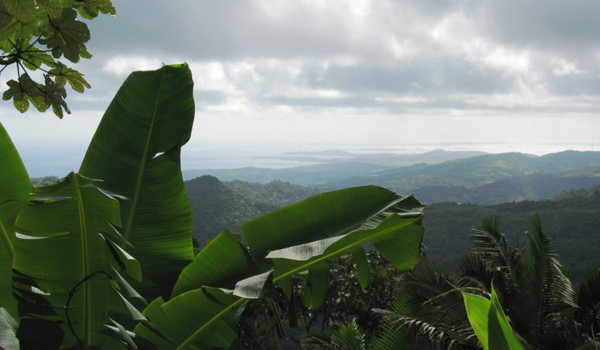 The most impressive feature of the Guánica Biosphere Reserve is its utterly divergent landscape. Only 35 inches of rain fall on this southwestern strip of coast each year. With your socks still damp from a trek through El Yunque, you might feel as if you’ve been transported to a different continent.

The small ranger station just beyond the park entrance can set you up with a map of the reserve’s short hiking trails. None are too strenuous, but remember to pack plenty of water and sunscreen; the hot sun and arid atmosphere will suck the moisture right out of you.

Along the shore just south of the forest runs scenic Highway 333, passing several pleasant beaches. Here, you’ll also find the posh Copamarina Beach Resort, and passage can be arranged to the two islands just offshore. A couple guesthouses are situated in the nearby town of Guánica. 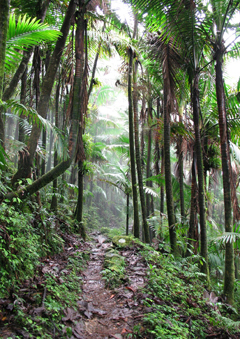 From rainforest to dry forest to something in between. The tall deciduous trees of the Guajataca Forest Reserve will look more familiar to most North Americans.

What catches the eye here often lies beneath the ground. The area is rich in karst formations, porous limestone that over the millennia has been eroded to form rough cliffs, deep sinkholes, and subterranean passageways.

Trail #1 will lead you to a most impressive example of the phenomenon: la Cueva del Viento. After passing through a hole in the hillside, a damp wooden staircase descends into this expansive and pitch-black cave.

Totally unsupervised, you are free to explore the maze of stalagmites, columns, and tunnels at your own pace. Don’t forget your flashlight!

As there are numerous trails weaving through the forest, it’s best to hike with a map. Unfortunately, at the time of this author’s visit, the ranger station on Highway 446 was closed for renovations. It might be best to stop for information at a DRNA office in San Juan or Aguadilla. The DRNA also runs a campground in the park.

The forest sees few visitors, despite its close proximity to other attractions. Good surfing beaches lie to the northwest; to the southeast sits Lago Guajataca, a recreational lake with several camping and guesthouse options; just beyond that, you’ll find the third-largest cave system in the world at Parque de las Cavernas del Río Camuy; and who could forget Observatorio de Arecibo, home to the world’s largest radio telescope? 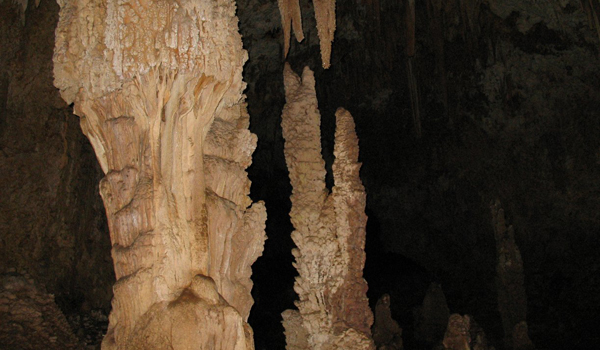 Don’t stop with these three offerings. The island is packed with parks and reserves, virtually undiscovered by tourists and awaiting explorers in search of a different Puerto Rico. At approximately 100 x 39 miles, this island is highly explorable. And the fact that US citizens don’t need a passport to visit is all the more reason to make plans for a trip to America’s “isle of enchantment.”

Matador member Caribe is from San Juan, and Liesbet is currently exploring Puerto Rico’s coast by boat. Not a Matador member yet? Sign up today!