“Hey, you down to take a little adventure road trip? We’ll hit some tropical beaches, do some off-roading, and maybe even skydive.” That was the question posed to me by Matador co-founder Ross Borden over a phone call one morning. First off, as a photographer, every single aspect of that sounded great — second of all, when he told me we’d be taking on this adventure in tropical North Queensland, Australia…. A few short weeks later, it was Australia here I come!

The following is what transpired on that road trip: open roads, beautiful scenery, and a dive through the clouds I won’t soon forget.

Scott’s visit to Queensland was sponsored by Tourism and Events Queensland. Learn more about Queensland on their blog.

As you wind North of Cairns along the coast, tropical beaches begin to multiply. We found it pretty difficult at times to actually cover any ground, because every time we saw a sign for a beach we had to turn off and check it out. 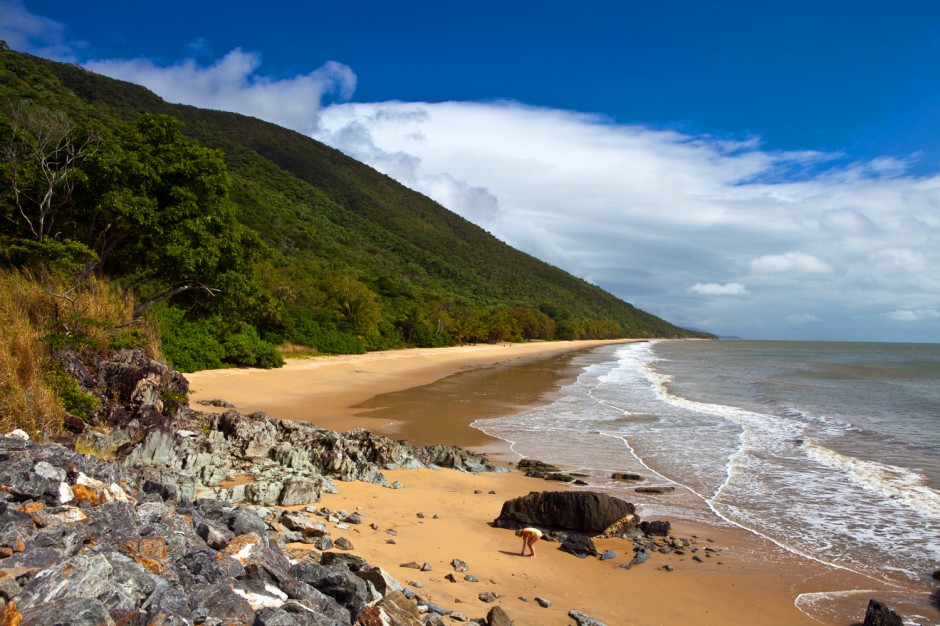 We had checked close to half a dozen beaches before we finally saw our first person. This woman had the place to herself, not a bad spot to take a little afternoon stroll. 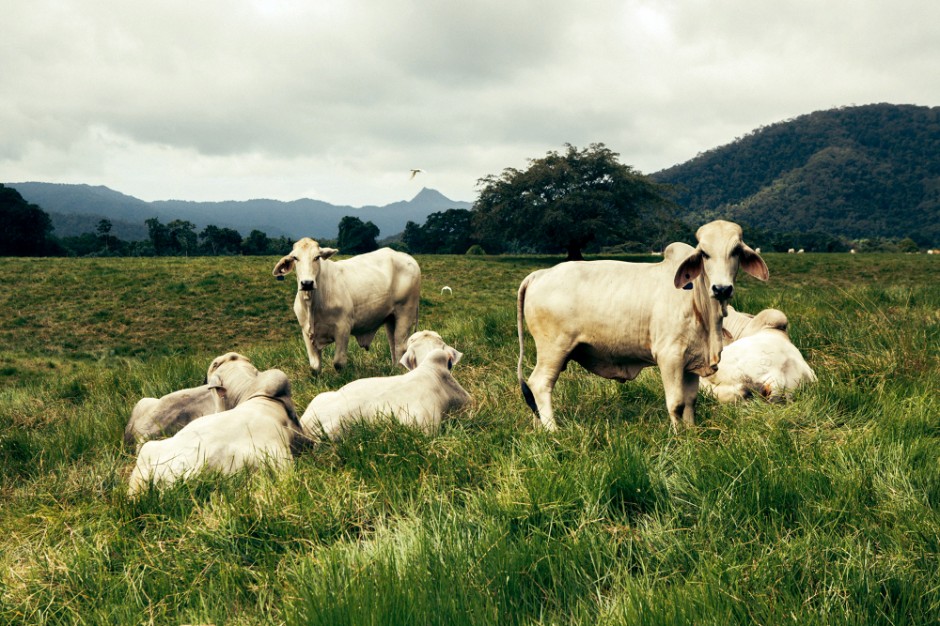 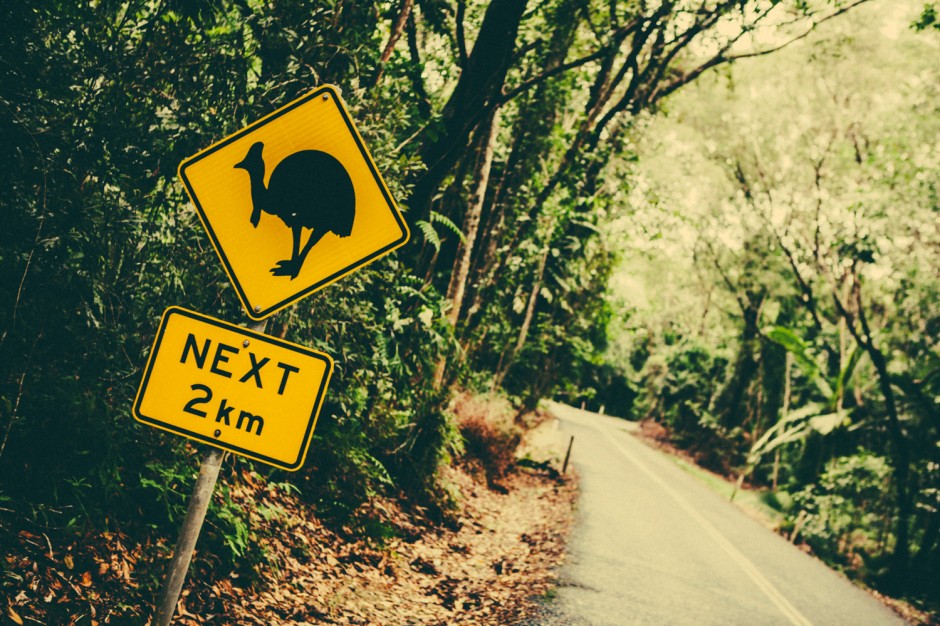 What the hell is that?

That would be a cassowary, or rather a sign warning you to be on the lookout for a cassowary.

A slice of the Daintree

Daintree National Park is your quintessential rainforest. This is a cross-section of some of sights from the park. 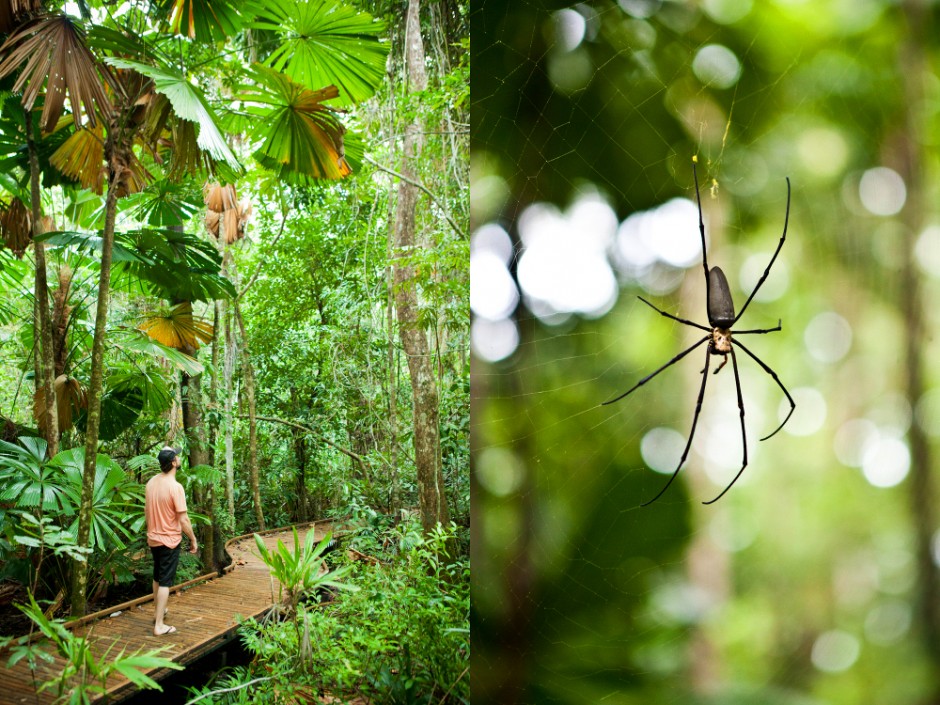 As I stared off into the jungle, admiring the beauty of the palm trees, I found myself zoned out and in cruise mode when I came nearly eye to eye with this little fella. I luckily caught him out of the corner of my eye and abruptly stopped, saving myself from plowing directly into a golden orb spider the size of my fist. 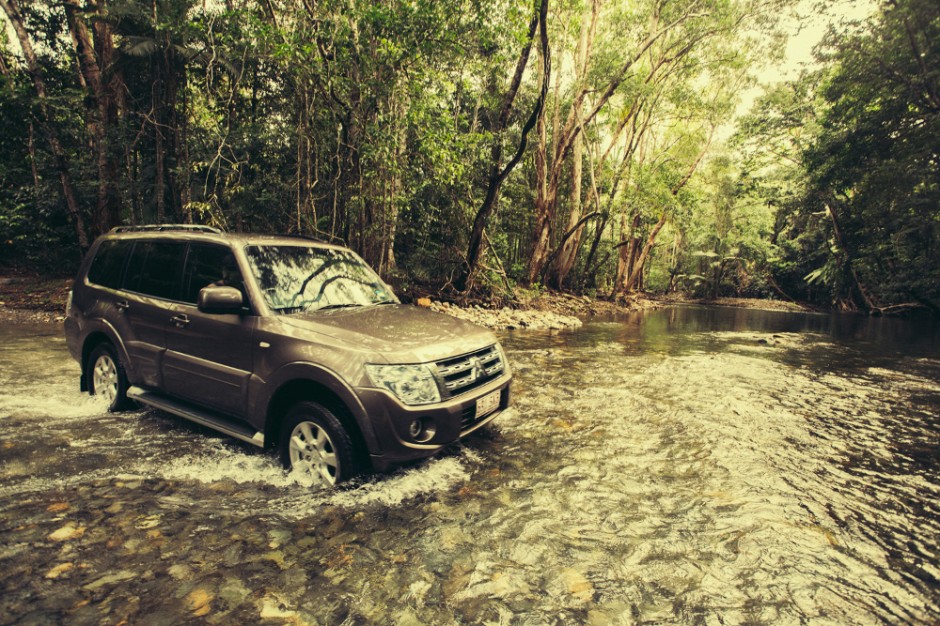 As you make your way north of the Daintree towards Cooktown, the paved road comes to an end and the road trip really begins. We were briefed by a few people in Cairns that we would need 4-wheel drive for the journey -- both Ross and I thought, how bad could it really be? That question was answered pretty quickly as we started powering our way through rivers that were waist high at some points. 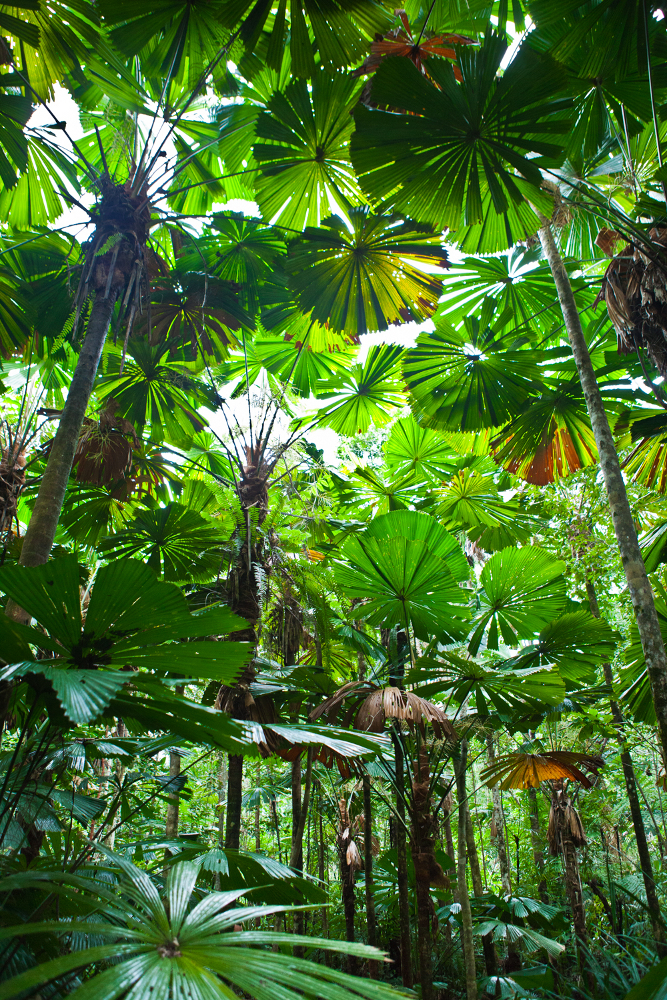 I could not get enough of these cylindrically shaped palm fronds. Some of them were near perfect circles -- absolutely beautiful trees. 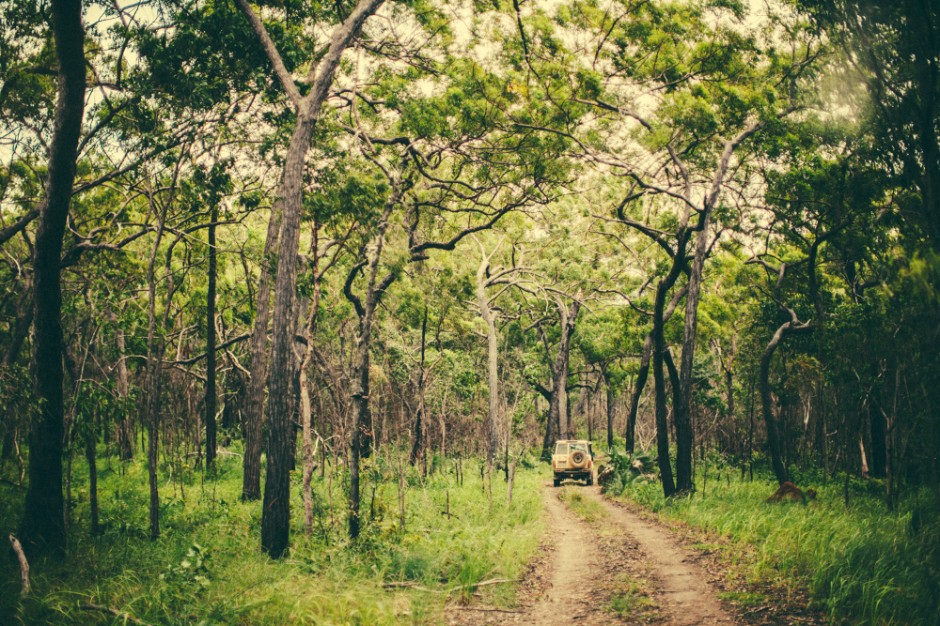 Charging our way through the Queensland bush. 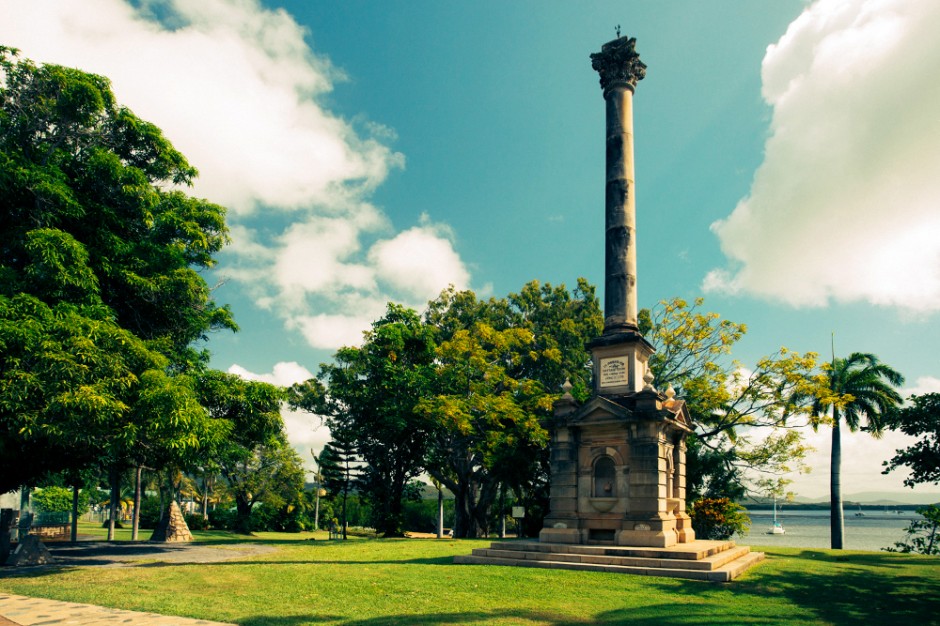 Small Cooktown is where Captain Cook and crew spent seven weeks in 1770 repairing their ship from damage sustained on the Great Barrier Reef. This monument commemorates their stay. In Cooktown, we also learned that the name "kangaroo" originated from his contact with the Guugu Yimithirr Aboriginal people near here.

Your typical Queensland hotel and pub…which is no pub without a little footy on TV. 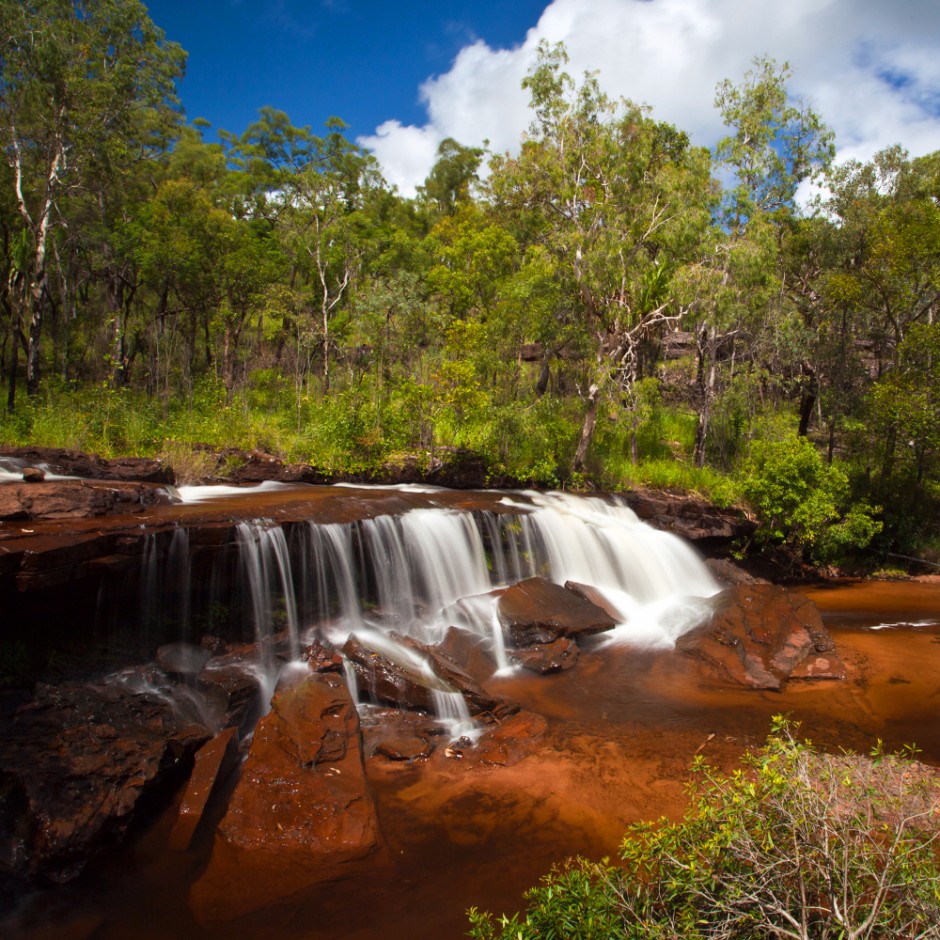 With all the rain this tropical region receives, there's no shortage of creeks and rivers, and all that water runs somewhere. Here's one of the small but beautiful waterfalls common in North Queensland. 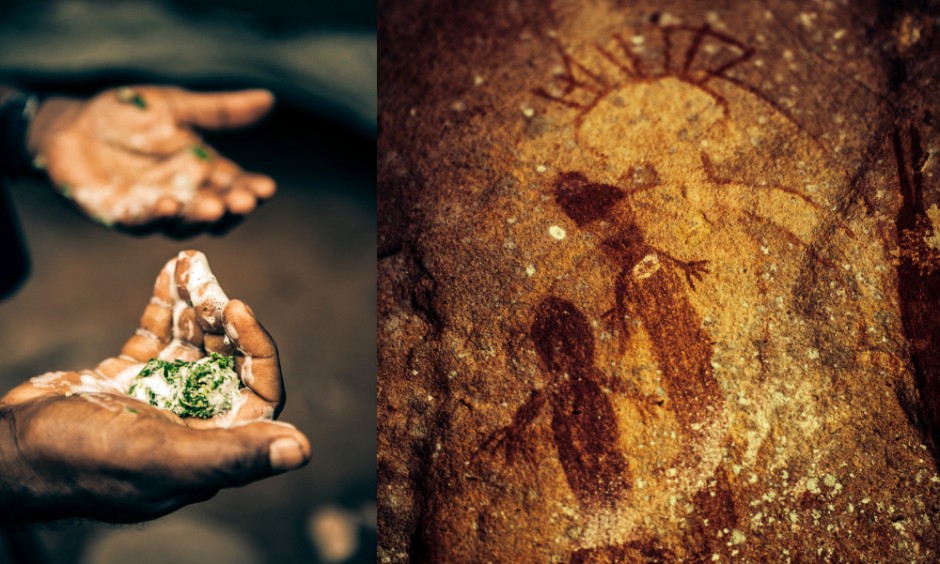 During a cultural tour, we were given the opportunity to learn about traditional Aboriginal healing techniques and about the meaning of different rock art and stories. 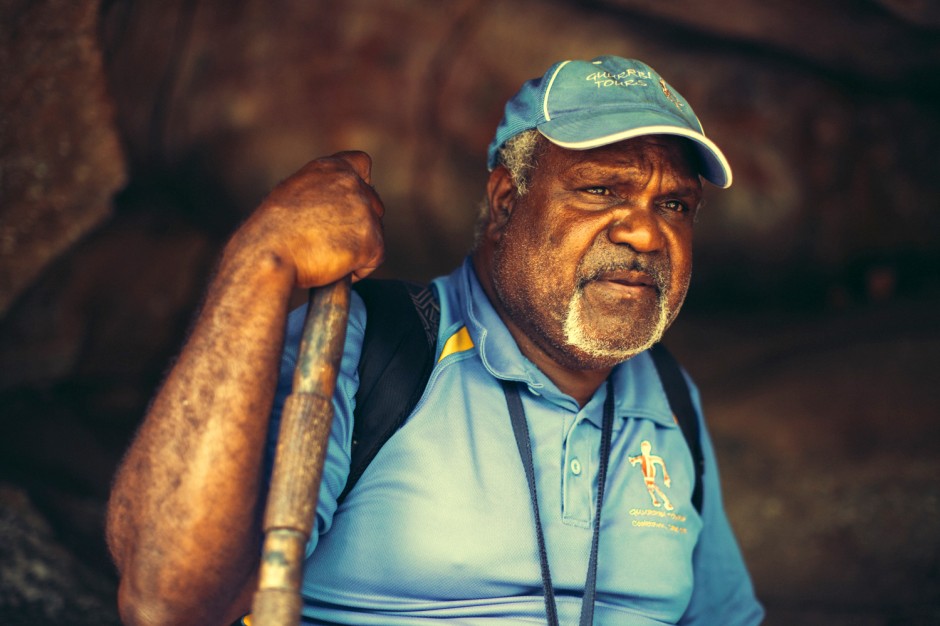 We were fortunate to get to take said Aboriginal cultural tour with Willie Gordon, an Nugal-warra Elder and Guugu Yimithirr speaker. 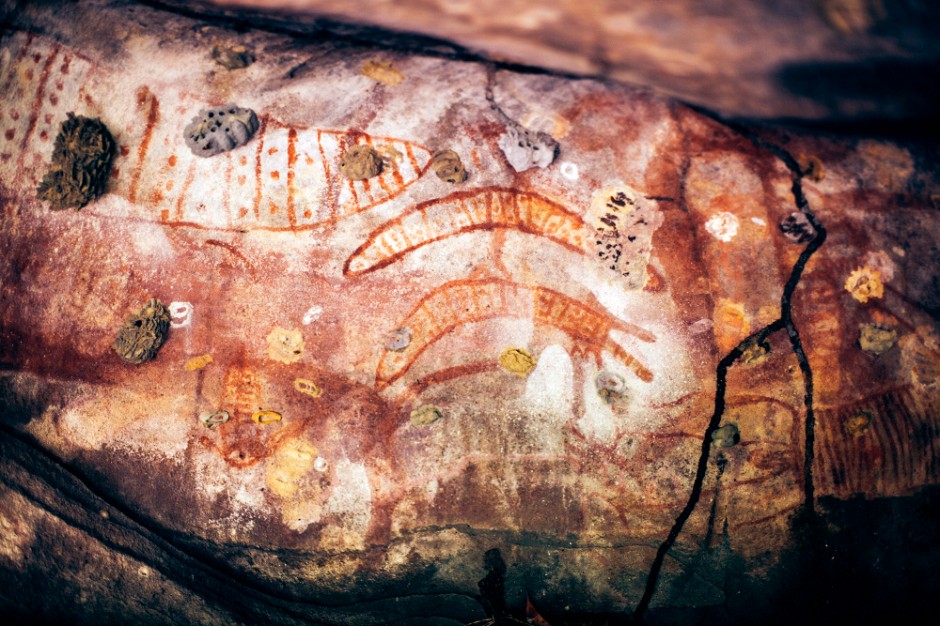 Aboriginal rock painting depicting the story of the Rainbow Serpent. 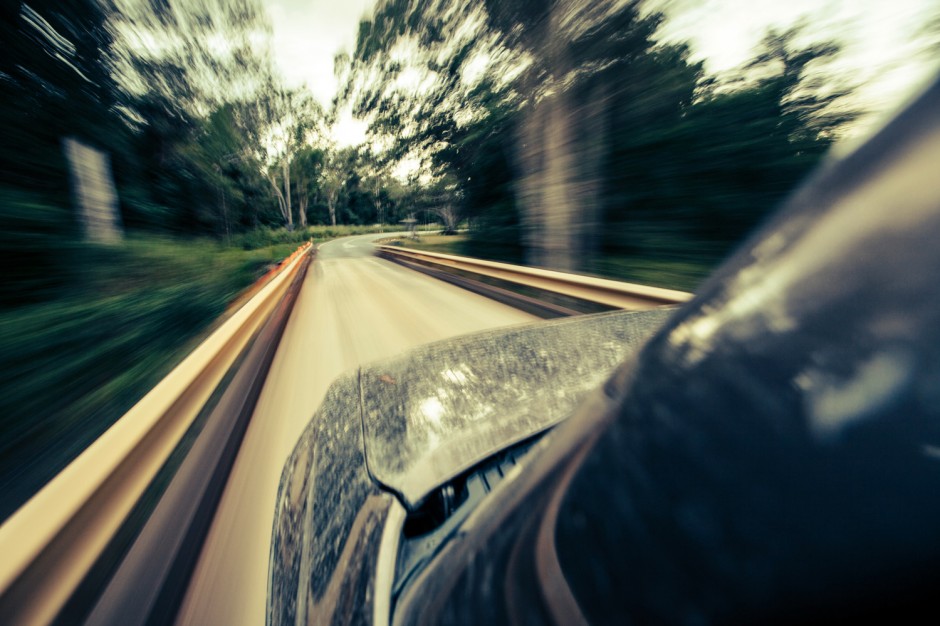 Nothing but fresh air and an open road…smells like a road trip to me. 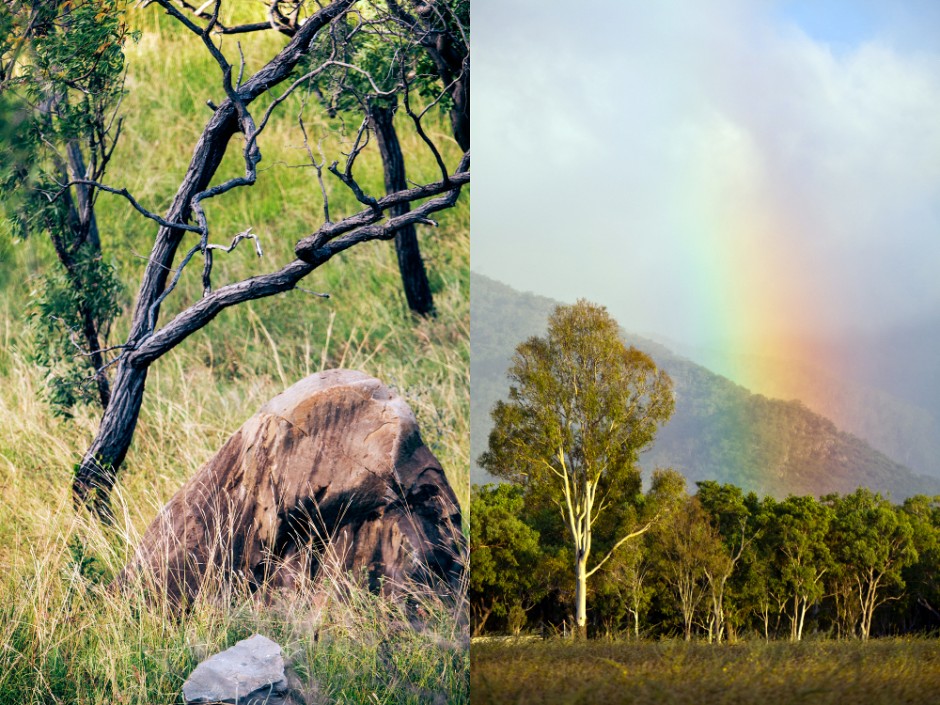 Some of the landscape scenery we came across looked more like paintings than real life.

After traversing some major off-road terrain, it's hard to beat a cold one in the local pub to unwind. At this place, there was also a rather interesting mural on the wall of Captain Cook and his men making their first landfall in Australia. 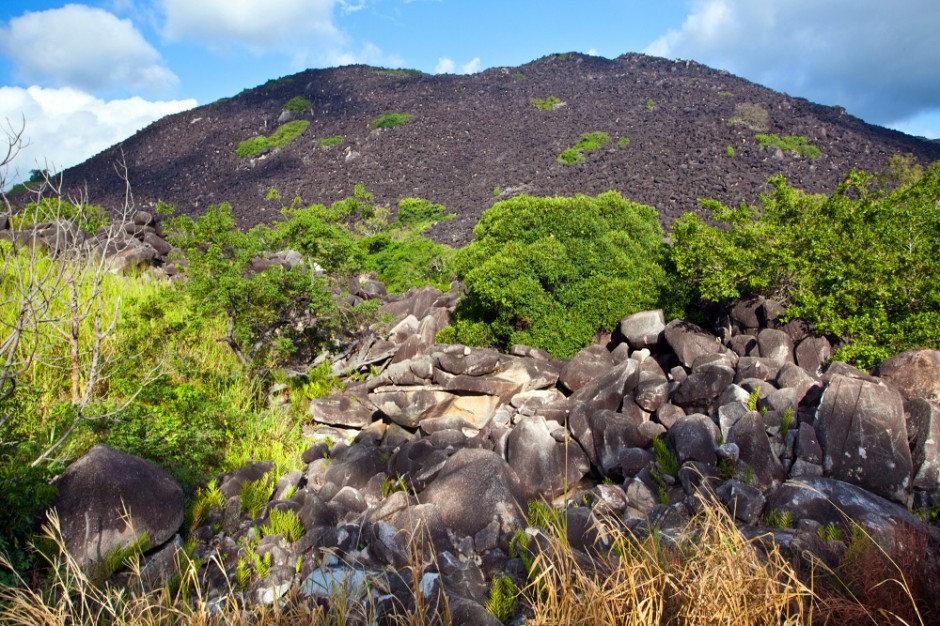 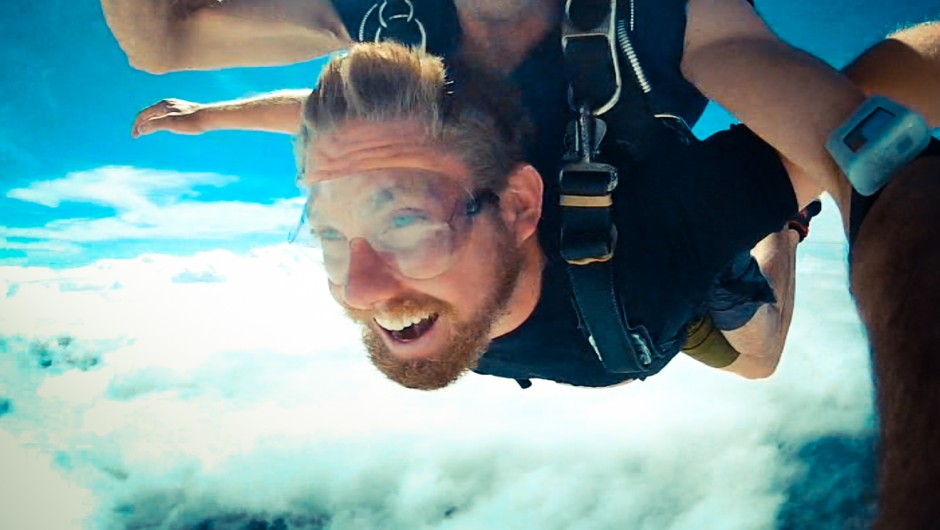 Skydiving over the Great Barrier Reef

At one point on the journey, the road trip went vertical. Skydiving was a rush, and although I wasn't able to see the Great Barrier Reef because of the clouds, jumping out of a plane and falling through those clouds was insane. 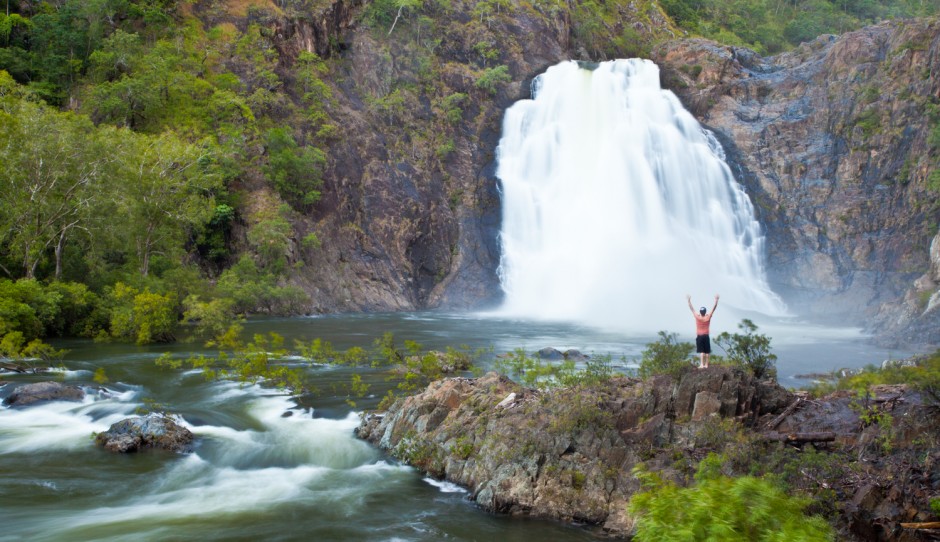 Here's Ross taking in the sights and sounds of Bloomfield Falls, near Cape Tribulation, close to Wujal Wujal, north of Daintree National Park in Queensland, Australia.

Milla Milla Falls, about an hour outside of Cairns, is your quintessential tropical waterfall. A lush green landscape, flowing water…I can still feel the zen from this place. 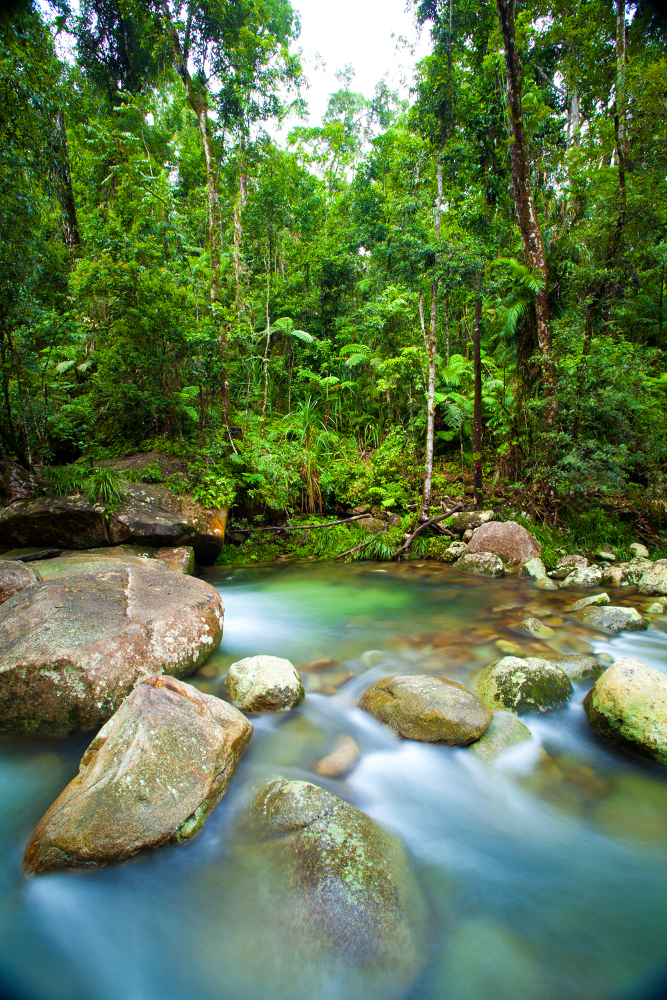 With all that water, there are beautiful turnouts everywhere you drive in Northern Queensland. 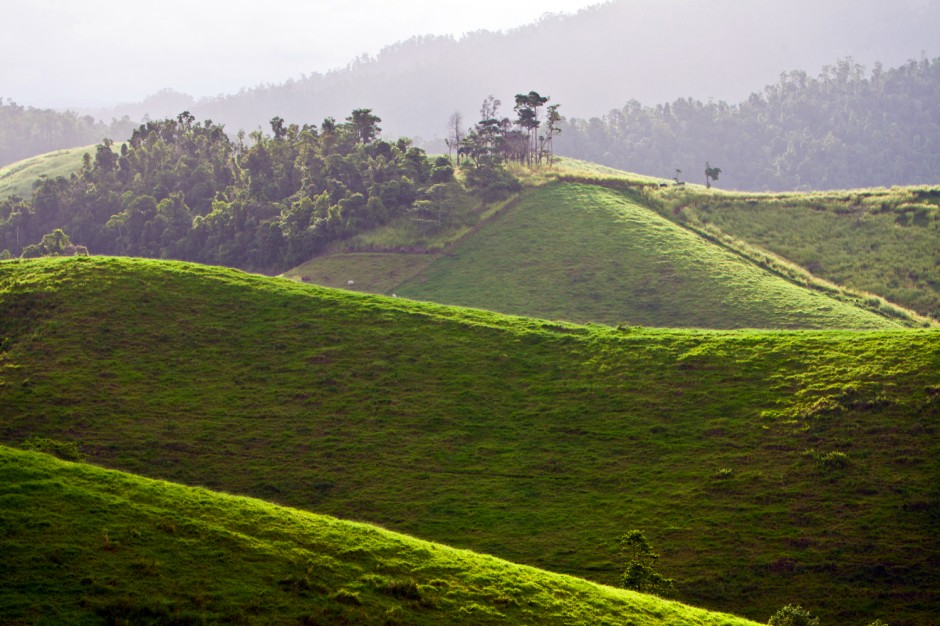 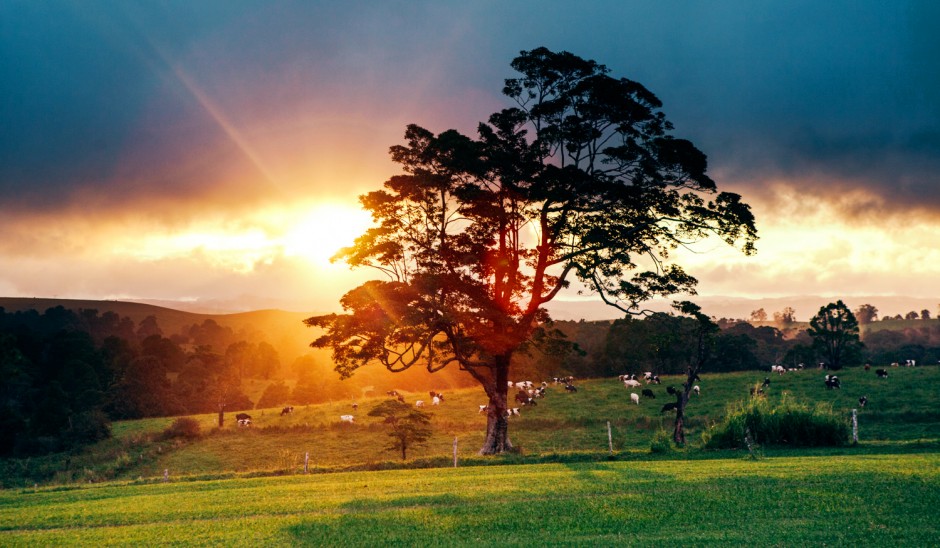 The day comes to an end on one of our epic drives. 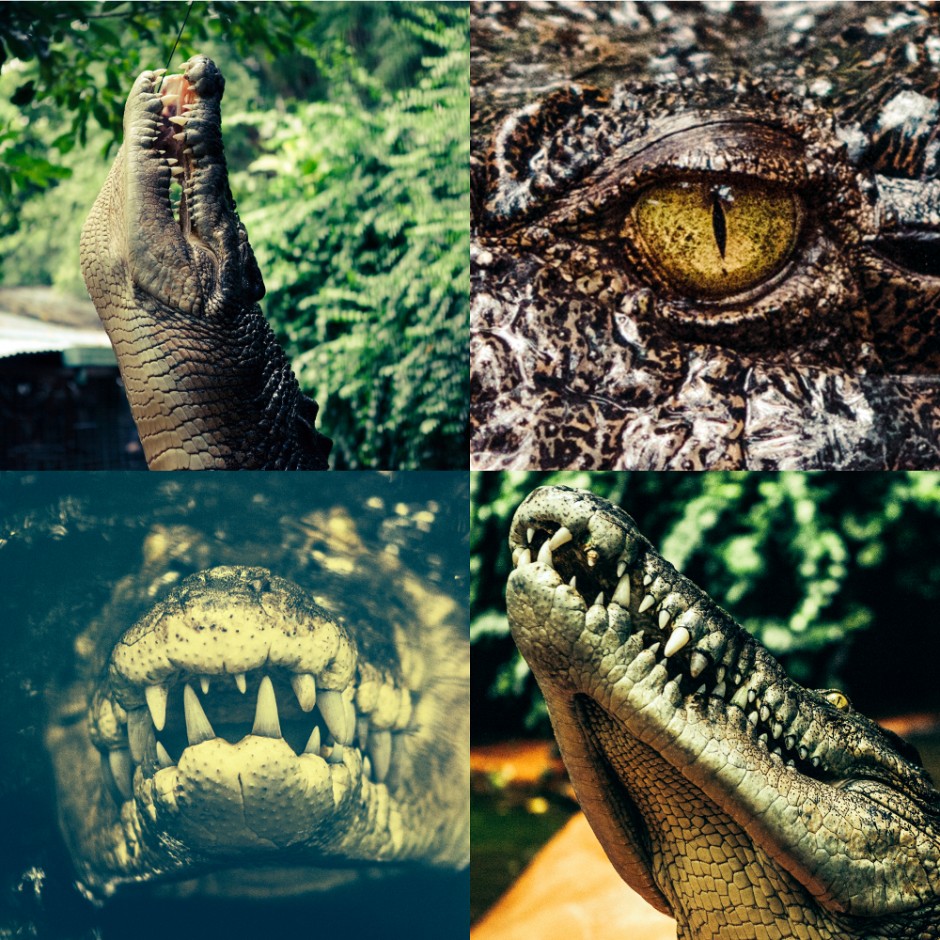 Saltwater crocodiles are no joke. They're the largest living reptiles in the world, and you don't want to find yourself anywhere close to these things when it's feeding time. 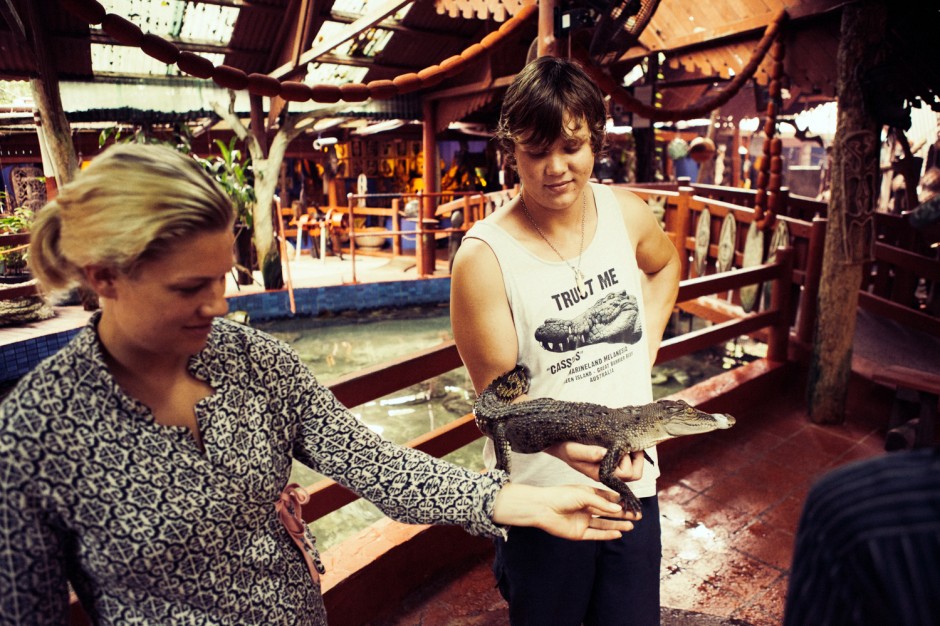 At this size, they're not so scary... 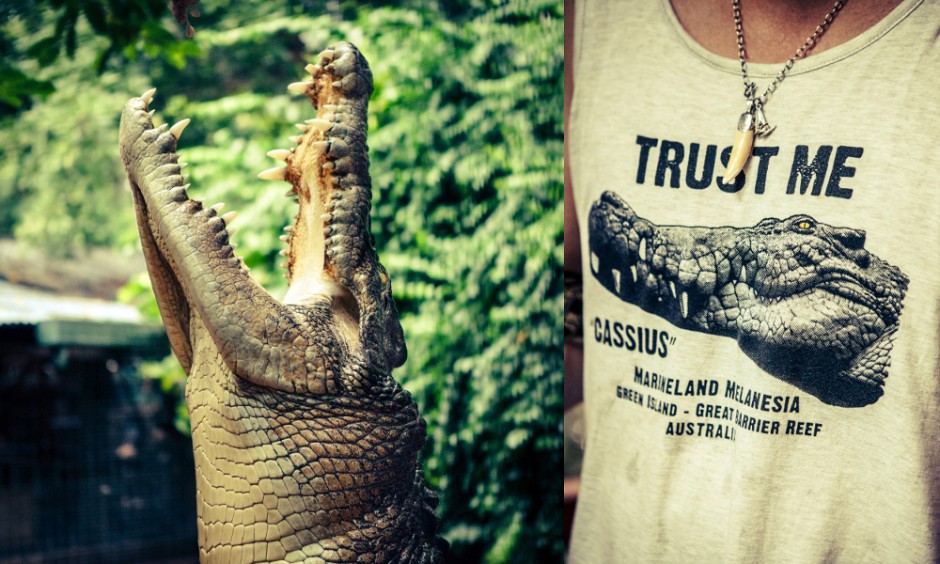 But at over 17 feet long and weighing in at more than a ton, Cassius is the world's largest croc in captivity. The scary thing is, this isn't even Cassius -- it's his much smaller friend. Cassius was a little too tired to eat when we came by.

This post is proudly produced in partnership with Tourism Queensland.
Tagged
Hiking Travel Trip Planning Queensland: Adventure in the Sunshine State
What did you think of this story?
Meh
Good
Awesome
✖
travelstoke
Download the mobile app
stoked by