ZOOM IN, and that speck becomes an island of rugged mountains, glaciers, and fjords. Despite its isolation, South Georgia is far from pristine. The island was a hub of whaling in the Southern Ocean until the middle of the last century. The unsustainable harvest of whales and Elephant and Fur Seals left the island’s wildlife devastated. However, decades have passed since the whalers left South Georgia and the wildlife has returned, in abundance.

On a few occasions over the past 10 years, I’ve had the opportunity to visit South Georgia as a naturalist and guide on small, expedition cruise ships. My formal training is in wildlife biology — birds, specifically — and I’ve got a particular admiration for the hardy creatures of the Southern Ocean. When the howling katabatic winds whip down from the glaciers at the head of each valley, sending us scurrying back to the ship in our zodiacs, the wildlife is, without exception, unmoved.

The images below show just a glimpse of South Georgia Island. Photographs can’t convey the sound (or smell) of 100,000 King Penguins, the curiosity of Fur Seal pups, or the adrenaline rush you feel as their territorial parent rushes out of the grass, feet away. For all of that, you’ll have to visit the place for yourself. 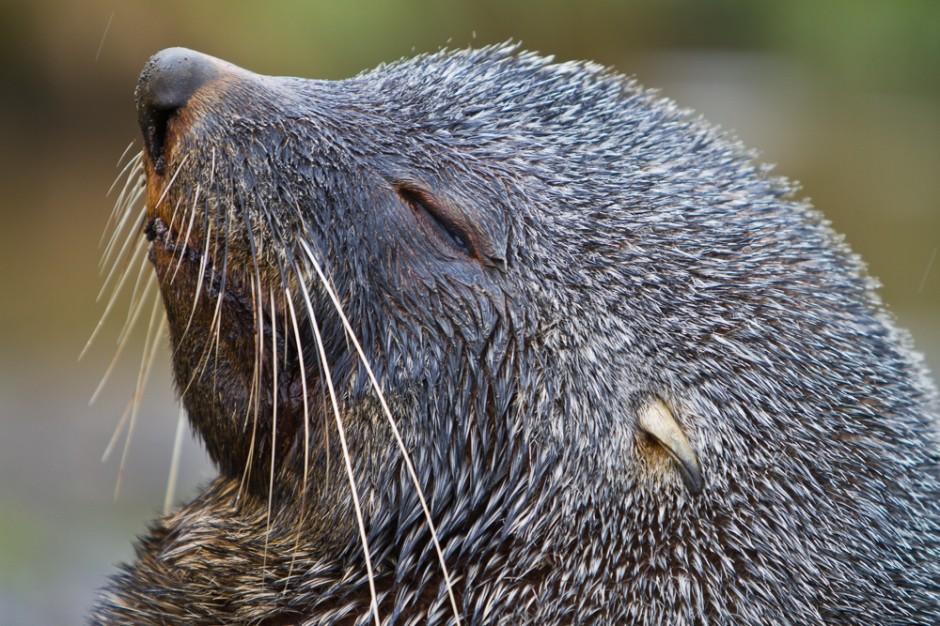 Fur seals are not always so benign. While the bulls, such as this one, are usually indifferent to the presence of people, the females, particularly those protecting pups, can be very aggressive. Bites have occurred and more than one traveler has been terrified by a surprisingly fast seal erupting from the tall grass at the edge of the beach. 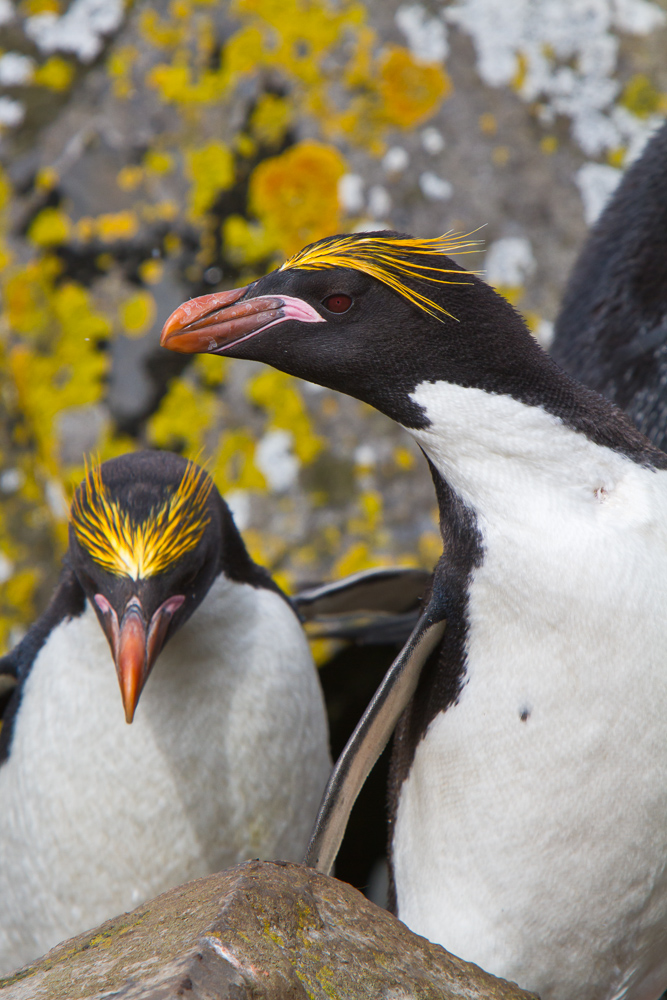 Macaroni Penguins gain their name from their distinctive crests of yellow feathers. These birds and their colony in Hercules Bay were hard to get to. We had to thread the zodiacs through a narrow slot in the rocks, risking motor props in the process, before gaining the shore at a 5-foot-wide slice of sandy beach. 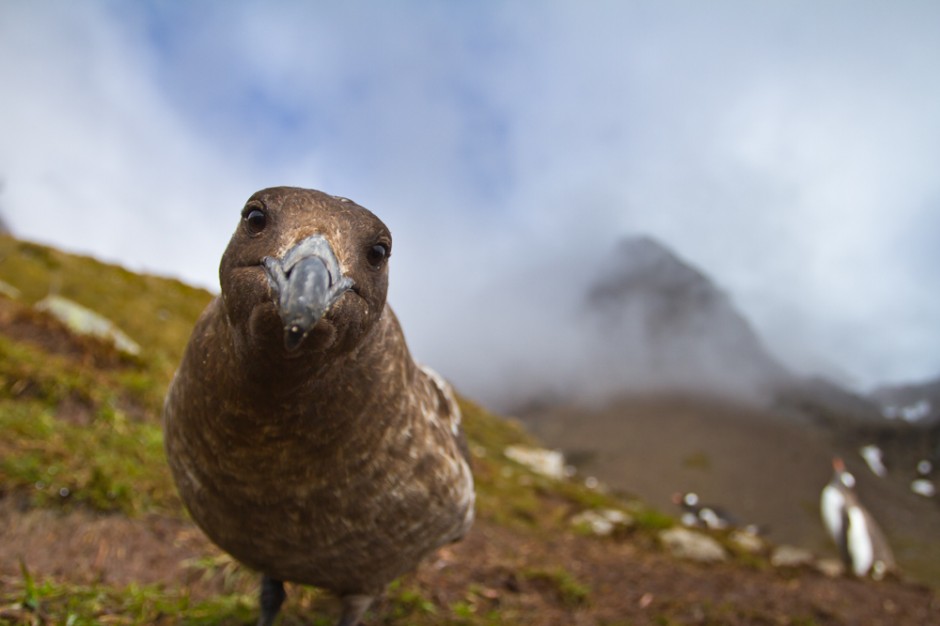 The Brown Skua is a predator of penguin eggs and young chicks. Always present on the edges of the colonies, they sneak in when the penguins are unaware, and snatch even fairly large young from their nests. On occasion, when the chick is too large to carry away, the Skuas will push or drop them off nearby cliffs. A gruesome sight. 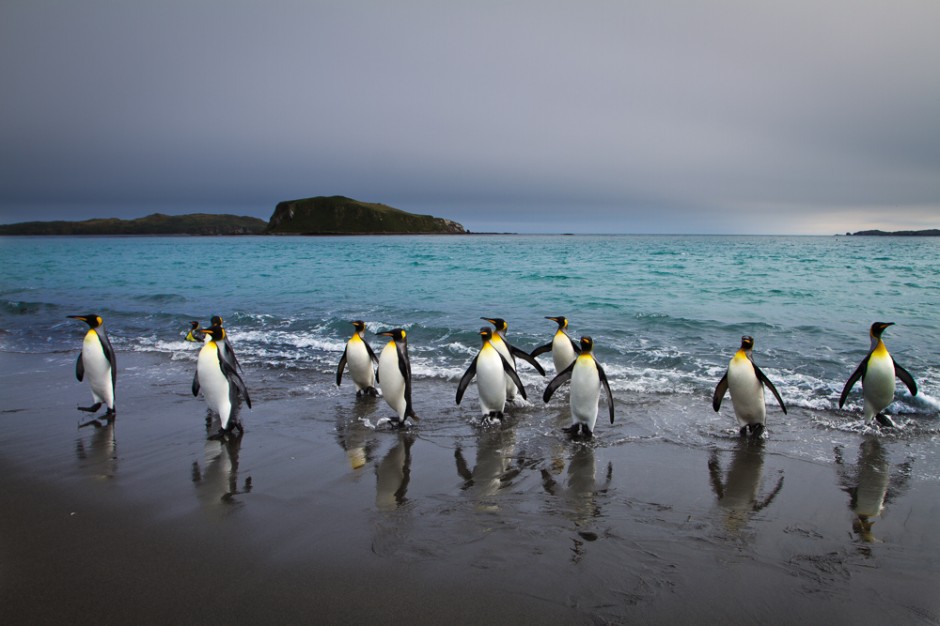 King Penguins such as these are second only in size to the Emperor Penguins of the Antarctic continent. Standing around three feet tall, and unconcerned with people, they will waddle within feet, or inches, of you as they move back and forth along the beach. I was waiting for the next load of passengers to arrive in a zodiac when these birds leapt, quite literally, out of the water and onto the beach. They were within feet of me when I snapped this shot with a wide-angle lens. 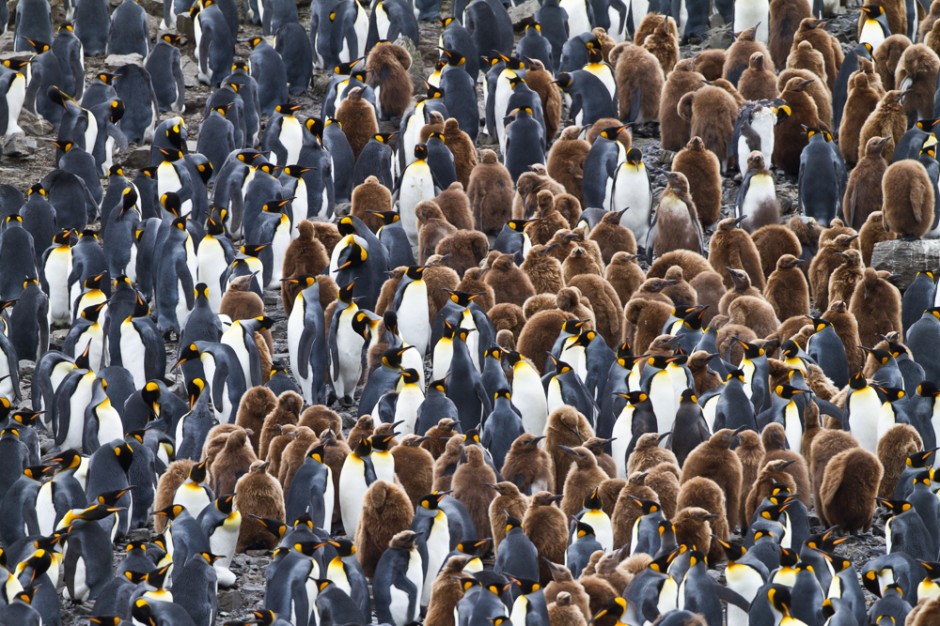 This is a small fraction of the entire colony. The birds nest only a meter or so apart, and clusters of juveniles known as Oaken Boys (the fuzzy brown guys) mingle throughout the colony. King Penguins don’t actually build much in the way of nests, but spend most of their time holding their eggs on their feet. Incubation duty is shared by both parents, and stints tending eggs can last weeks as the other parent is off foraging in the sea. 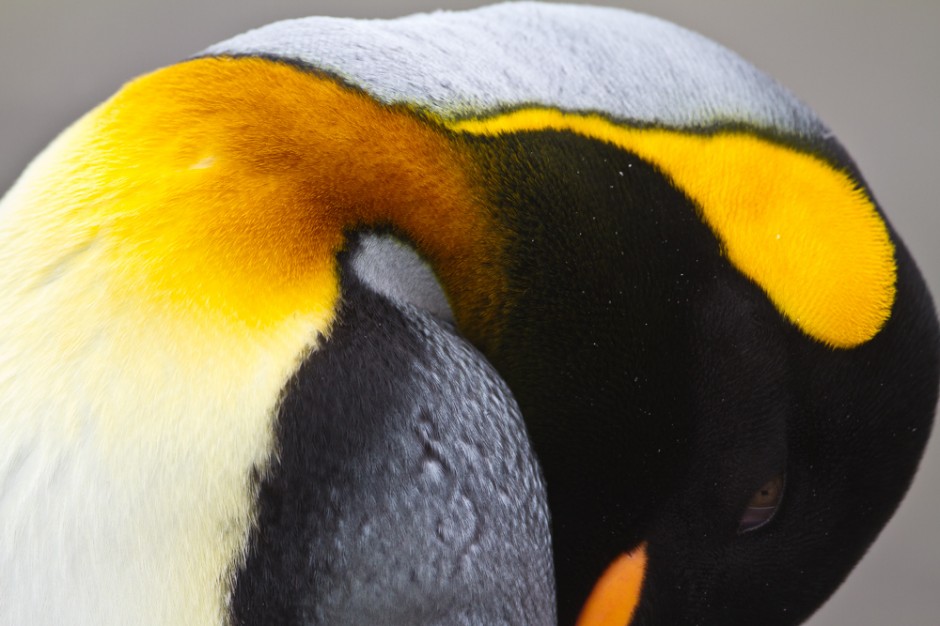 An adult King Penguin takes a snooze and shows off the elegant coloring of its head and neck. The older the bird, the more and brighter the coloration. 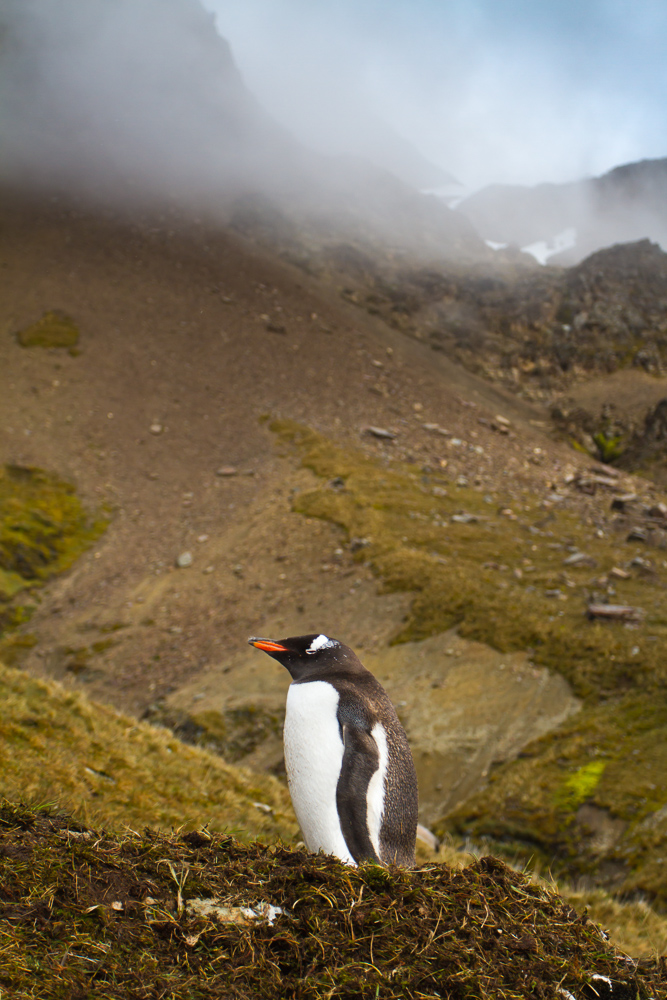 Gentoo Penguins are another species common on South Georgia and throughout the region. This one is sitting on its nest of grass and vegetation, high on a hillside above Fortuna Bay. 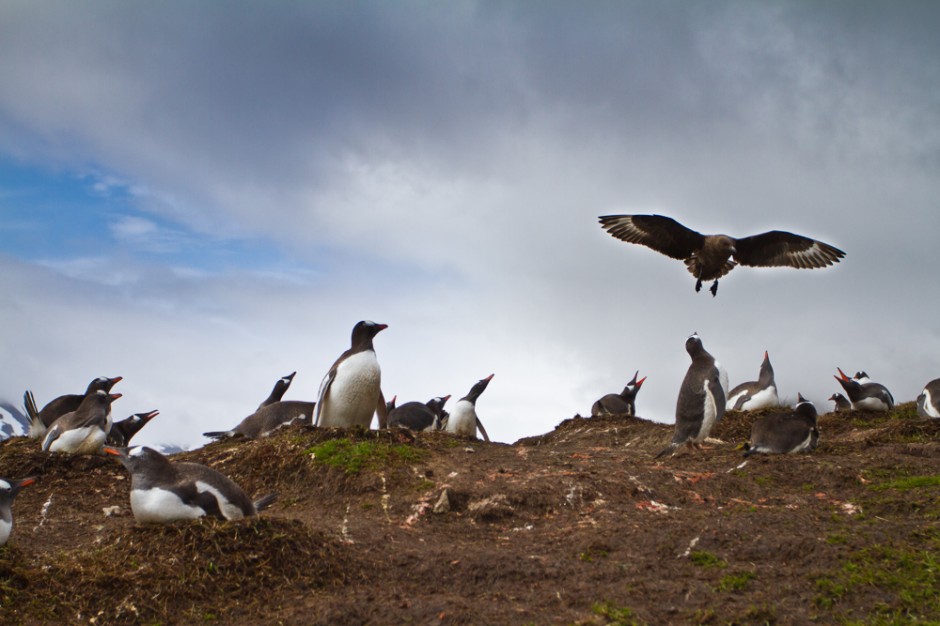 A Brown Skua, relative of the gull family, patrols a small colony of Gentoo Penguins at Whaler’s Bay, on the lookout for unattended eggs or young. 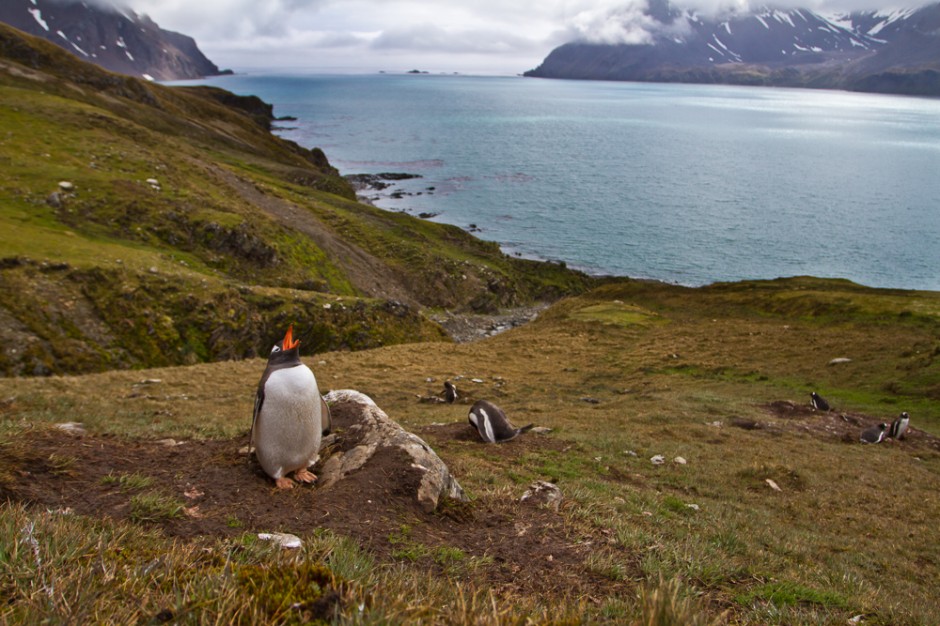 A Gentoo Penguin trumpets from a hillside over the glacially colored water of Fortuna Bay. Considering penguins are flightless, and waddle none-too-quickly, I'm always surprised when I encounter a colony of birds far above the nearest beach. 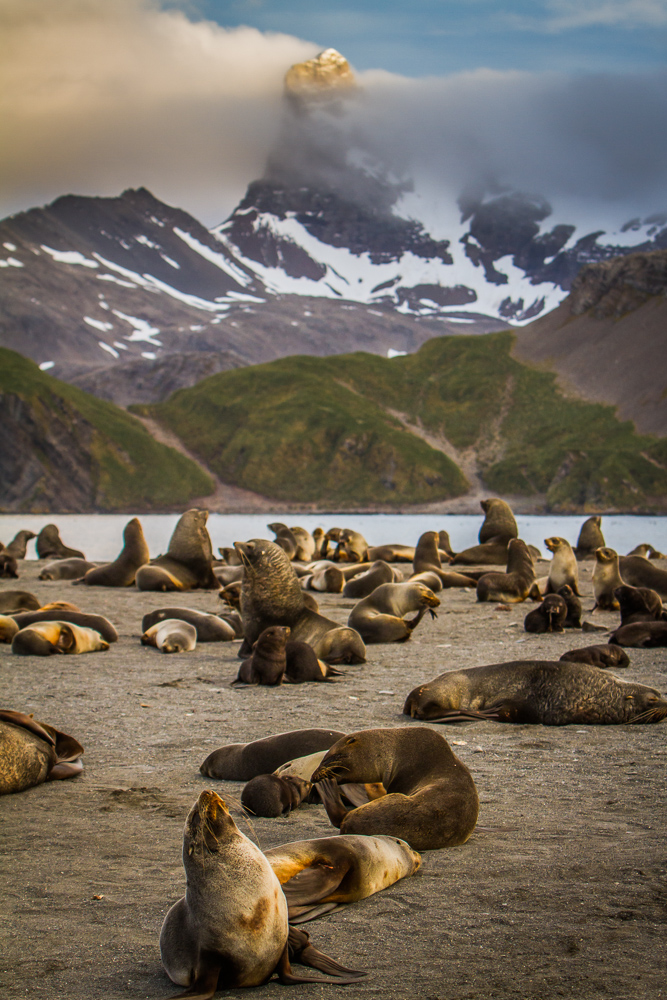 Fur Seals, once nearly absent from the island due to over-hunting, are now so abundant that on some beaches, such as this one at Whaler’s Bay, it's hard to even find a place to land a zodiac. 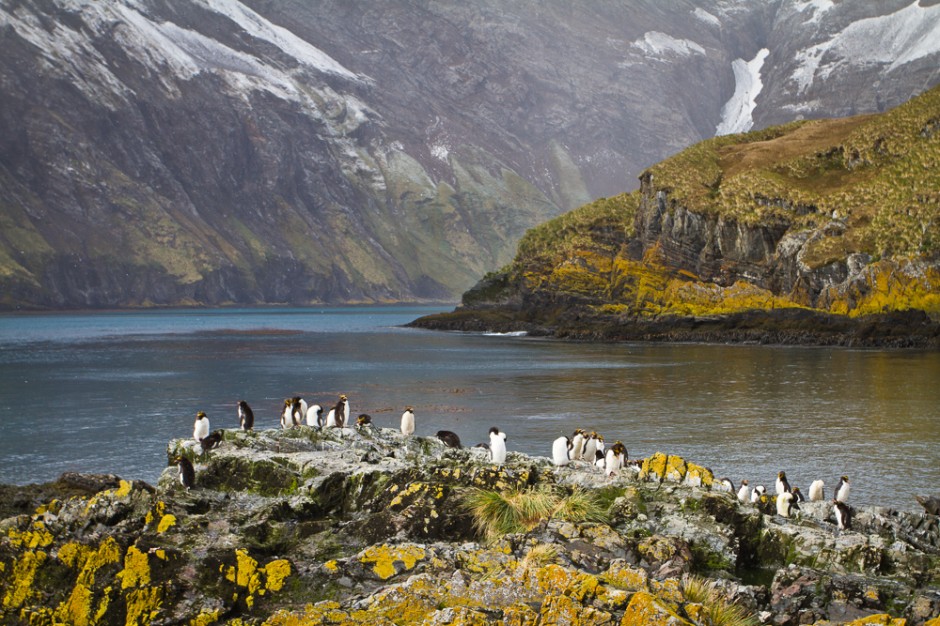 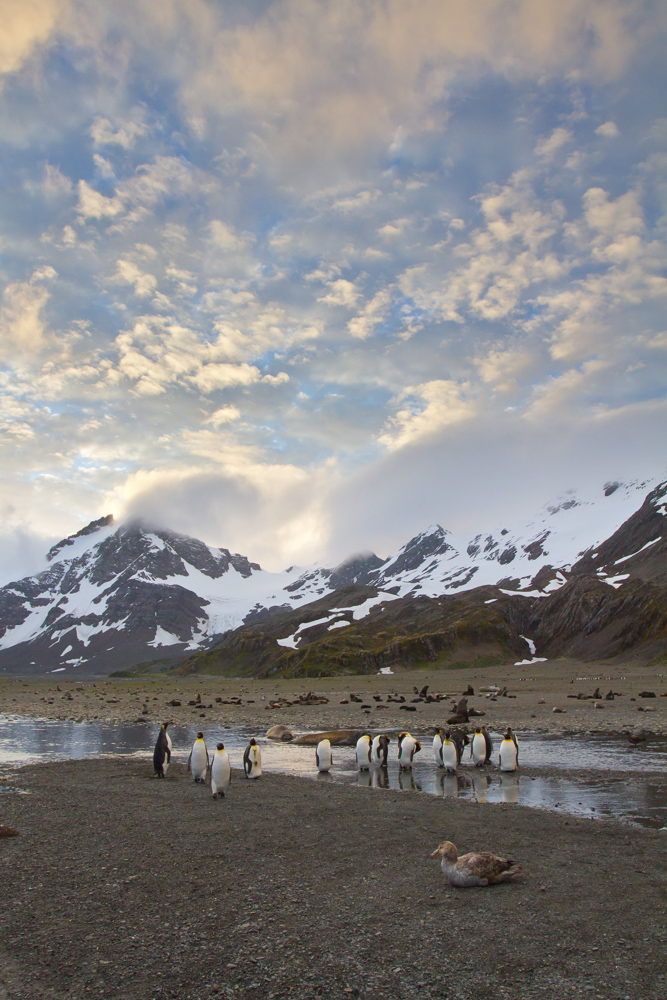 A small group of King Penguins and a Giant Petrel stand in a freshwater creek descending from the mountains. These are non-breeding birds, loafing on the shore far from the nearest breeding colony. 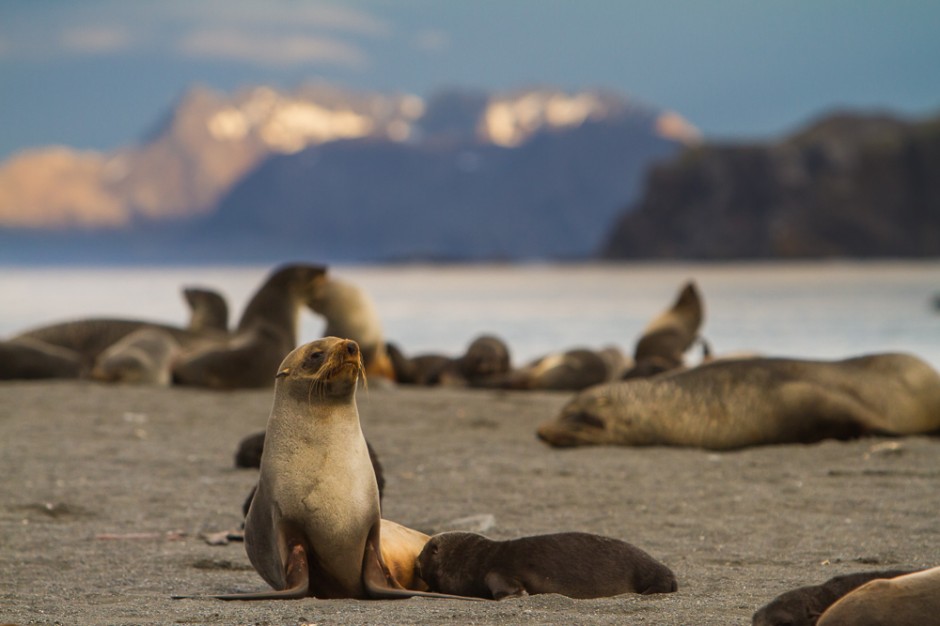 Fur Seals are probably the most abundant species on South Georgia despite having once been hunted to near extinction. In fact, there may be more Fur Seals than ever before on the island, raising concerns about the damage they're causing to the tussock grass habitat that lines the beaches. 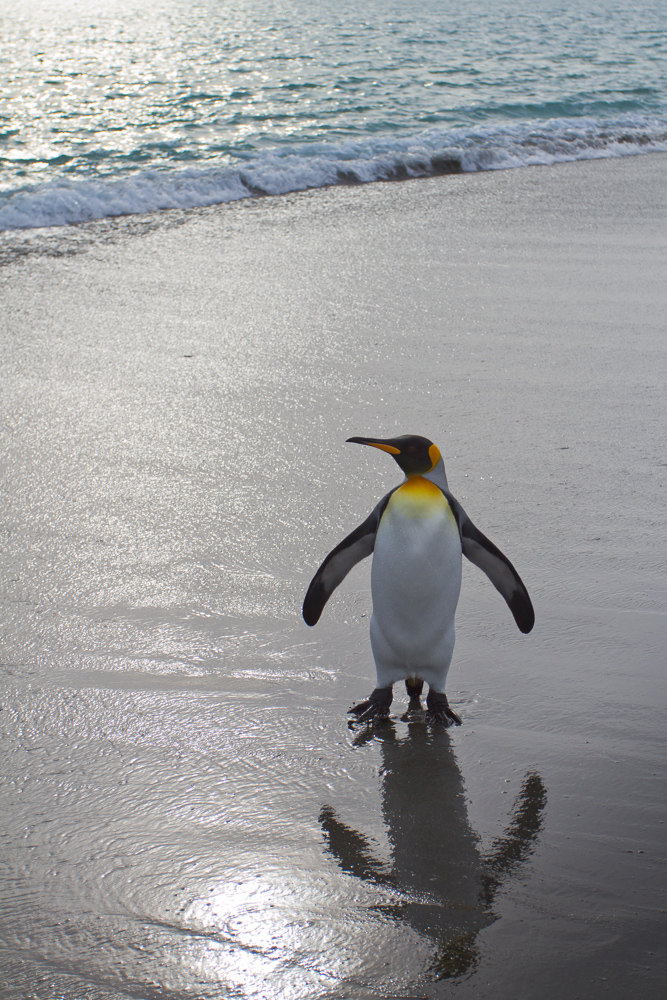 I photographed this King Penguin just moments after it emerged from the surf. At a colony the size of the one at Salisbury Plains, penguins can constantly be seen coming and going. 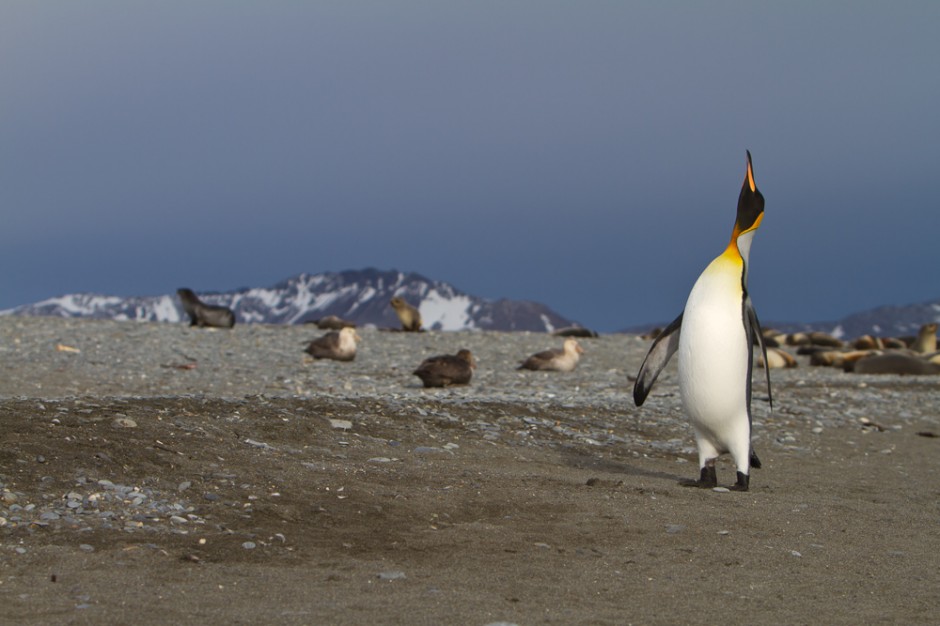 A King Penguin trumpets on the beach at Salisbury Plains. The birds in the background are Giant Petrels, seabirds and scavengers the size of albatross.

Wildlife at the End of the World

Photos and Notes From an Antarctic Voyage