View all travel news
Top Countries
Top CitiesView All Destinations
Trending Regions
Trending Cities
Load More
VBS.tv produces some of the most groundbreaking documentaries around. Unfortunately, it’s not always so easy to find it all.

THE UNDERGROUND NEWS station VBS.tv produces some of the most incredible ground-level content I’ve ever seen. They’ve bribed their way into North Korea, met with black market dirty bomb dealers in Bulgaria, and interviewed a Scandinavian who claims he’s the ruler of the Andromeda galaxy, and captured everything on film. 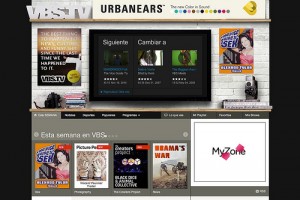 But I hate their slow, clunky, and poorly organized website. Despite an abundance of great and groundbreaking investigative journalism, it’s extremely frustrating to wade through dozens of ads and bandwidth-gorging media plastered all over the site. Not to mention big chunks of skater/indie music coverage that’s cool but not as relevant to my interests. Mostly, when I tell people to check the site out, they later say “I went there, but didn’t really know what to do.”

So, I decided to lay out in clean, plain text the VBS documentaries* that I’d recommend to anyone with 10 minutes or more of free time, giving you a resource to come return to once you’re cursing the site’s cumbersomeness. Each is amazing, but I’ve rated them with the latest scientific approval metrics, the Matadorian Index, based on degree of mind-blowing-ness.

– One of the most well-known pieces of the VBS library, and for good reason. Vice co-founder Shane Smith travels to Monrovia, the capital of Liberia, one of the world’s most perpetually war-torn countries. Along the way he busts an imprisoned warlord out of jail, meets some heroin-smoking pre-teens, and talks to a former General-turned-preacher whose war name was General Butt Naked. But there’s far more to the video than the surface shock value.

– This was my first encounter with both VBS and Vice, and man, what an impression it made. “Basically the most dangerous drug known to man,” is how they describe scopolamine, a derivative drug from a plant found all over Colombia, which VBS goes to investigate. In short, the drug is more of a weapon, capable of turning victims into the enslaved zombies of the person that gave it to them. The fact that it exists is mind-blowing enough–and VBS takes it head-on at every level, interviewing both victims and perpetrators, and even buying some off the street from a cracked out Colombiano named Demencia Black.

– If you’re going to watch just one video, make it this one. The immense insanity occurring beyond the North Korean border must be seen to be believed, and even then it becomes all the more unbelievable. Prepare for fake dinner banquets, a shrine of gifts to Kim Jong Il from adoring world leaders, and the biggest, weirdest acrobatic spectacle of all time.

– This guy, Heimo, is essentially Jeremiah Johnson come to life. He wanted to get “away from it all,” so he picked a place no one was going: Arctic Alaska. He’s been living in the Alaska bush for more than 30 years, creating a fully sustainable lifestyle while living over 100 miles from the nearest human. Bears attack, fish are eaten, and Heimo drops the kind of knowledge only available from one of the world’s last frontiersmen. 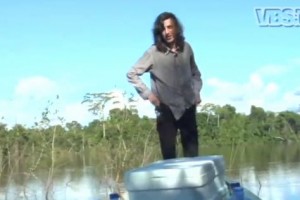 Hamilton Morris in the Amazon. Photo from VBS.

– The son of renown documentarian Errol Morris (Fog of War), Hamilton Morris has become Vice / VBS’s resident psychopharmacological expert, channeling the spirit of Hunter S. Thompson dressed up in the body of a pale, bony hipster. In “Nzambi,” Hamilton travels to Haiti to investigate the cultural origins and any possible truthiness to the Nzambi (Zombie) of Voodoo culture, whereby criminals are given a concoction of zombifying potential. Hamilton attends a few strange witch-doctor ceremonies and gets incredibly stoned, but whether or not the Nzambi can be called legitimate will be left for you to decide.

– Hamilton rendezvous with a formerly cannibalistic Amazonian tribe that’s known for tripping out on the oil secreted by a frog while it’s being torured, using it before going into battle, abortions, and killing time while bored. Since it apparently can’t produce the oil in captivity, Hamilton sets out to capture one in the wild with the locals.

– How difficult is it to buy a nuclear warhead on the black market? This is the question VBS went to answer in Bulgaria, meeting with a guy who sold one to a French journalist a few years ago. It’s only 8 minutes long, but you’ll be left with hours of questions.

– Ever heard about the Great Pacific Garbage Patch? It’s a massive, floating island of trash and waste sitting in the middle of nowhere, possibly about the size of Texas. This is a long video, but well worth your time and all of our attention.

– Everyone knows Sudan has some monumental problems on its plate right now. Few people, though, know just what’s going on and what’s caused so many atrocities in the country of more than 30 million. Shane Smith takes the helm, and though it’s a long ride, you’ll learn more about Sudan than you will by from any mainstream source.

– Back in the early 90’s, Brazil’s Carandiru prison was one of the biggest in the world, and also one of the most overcrowded with 8,000 inmates squeezed into a 3,000-person capacity facility. Many riots broke out over the years, but the prison saw a breaking point when more than 100 inates were slaughtered by the military’s automatic rifles. In this video, VBS visits where the prison used to stand, and talks with a former employee who holds a collection of thousands of items left over from the hellish penitentiary.

– Vice co-founder Suroosh Alvi somehow made his way through the red tape and insane border police at the Khyber pass and into one of the world’s largest open gun markets in Pakistan. Tongueless cave-dwelling pistol makers and kids gleefully shooting AK-47s are the norm, and there’s about as much gun control as there are George Bush Fan Clubs.

Shulgins I Have Known and Loved –

– In this episode, Hamilton visits the home and laboratory of Alexander Shulgin, a founding father of the psychedelic movement and creator of just about every form of Ecstasy known to man. Hamilton’s star-struck giddiness is entertaining, but Shulgin himself steals the show as one of the last remaining roots of American counterculture.

– It’s nearly impossible for non-muslims to visit Mecca during Hajj, Islam’s most sacred pilgrimage. Vice co-founder Suroosh Alvi went with his parents, and brought back his handicam footage. It’s more than five million people packed into one place for the same purpose, something you’ve really got to see to even begin to understand.

– Hamilton travels to Iceland to cover a fashion show, and along the way tries to recruit some pretty Icelandic girls to take some mushrooms with him. He fails at recruitment, but does a decent job covering the event. Does an even better job tripping. 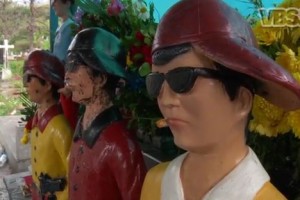 The Holy Thugs. Photo from VBS.

– Last year, Venezuela accounted for at least 14,000 murders, many occurring in the tranquil tourist haven of Caracas. As a nearly homogenous Catholic population, many Venezuelans have decided the traditional saints aren’t doing their part to keep the city safe, so they’ve invented the Santos Malandros, or “holy thugs,” who appear as blessed figurines wearing cocked ballcaps and scowls that would make Sly Stallone blush. See for yourself.

– There’s a guy named Ralph, living in Sweden, who claims he’s the ambassador the galaxy Andromeda. He requires visa paperwork to enter his home (country). He invented his own musical language, and is probably one of the most prolific composers of the last century. Check him out, no visa required.

– India’s known for myriad traditions that cause western brows to raise. Women once willingly threw their bodies on their late husband’s burning bodies, for instance. Taboo traditions still linger today, such as the Devadasi, a peusdo-religious order of prostitutes who once enjoyed respect in their medieval heydey but now have been reduced to mud-hut brothels filled with exploited, impoverished teenagers. VBS’s correspondent probes deep into this system, confronting the line between tradition and exploitation.

– Don’t take your garbageman for granted. In Naples, Italy’s most powerful mafia, the Comorra, controls the waste management industry with reckless abandon. Countryside vineyards have been turned into open-air landfills, mutated livestock graze rolling hills, and just about everything is poisonous or a carcinogen. The locals are pissed–but what can they do?

– The world’s first “bulletproof fashion boutique” comes from the office of Miguel Caballero of Colombia, who designs fashionable body armor for everyone from military personnel to heads of state. VBS interviews the man in charge and takes his clothing for a test drive.

– There are people living in the sewers of Bogota. What’s worse, they’re discriminated upon and attacked. By the police. VBS sends a correspondent to check it out. It’s basically like MTV Cribs, except the opposite.

– Mongolia has some awesome hometown sports, and Yak racing, rodeos, and polo are just the tip of the iceberg. The video shows off the amazing scenery of the Mongolian steppe, but unfortunately doesn’t answer the biggest question of all: is a cowboy in Mongolia called a yakboy?

– Norway has recently had to ask itself some difficult questions: in a country where the maximum sentence is around 21 years and prisons are more akin to relaxed penal colonies, what’s to be done with a mass murderer like Anders Brevik? The crew heads to Bastøy Prison, about an hour from Oslo where they “are training to teach the inmates to be aware that they are part of something bigger. And whenever you do something to the thing outside of yourself–the soil, or a human being–it comes back to you.” It’s an enlightening look at one of the world’s most progressive prisons.

The Last Dinosaur of the Congo –

– VBS sends a guy to Congo to look for dinosaurs in “the only remaining place that survived the last ice age,” a place where dino-sightings aren’t exactly uncommon. Some pygmy guides lead him through the wilderness, and though obviously he didn’t come away with a dinosaur, it’s a wild trip all the same.

The Radioactive Beasts of Chernobyl –

– Shane travels to the land of unwanted real estate, Chernobyl, to see just what’s lurking in the forests that nearly guarantee a cancerous experience. Yes, people still live there.

*Note: These are the best of the ones I’ve been able to find–as I’m just now publishing, I’m still discovering new videos (that are years old) through the site. I’m not sure if that’s a good or bad thing.