The Peak District National Park is to England as Yellowstone is to the United States — that is, each is the first national park in its respective country, the first landscape deemed beautiful enough for official protection. In the case of the Peak District, national park status was granted in 1951, and it’s been attracting millions of visitors a year ever since to its rocky outcrops, rolling hillsides, and ancient stone villages.

Fly into Birmingham Airport — your gateway to England’s Heartland, with direct flights from the US — and you’re practically there (the park’s southern boundary is about an hour’s drive north of the city). Not yet convinced to book the trip? Scroll down and you will be. 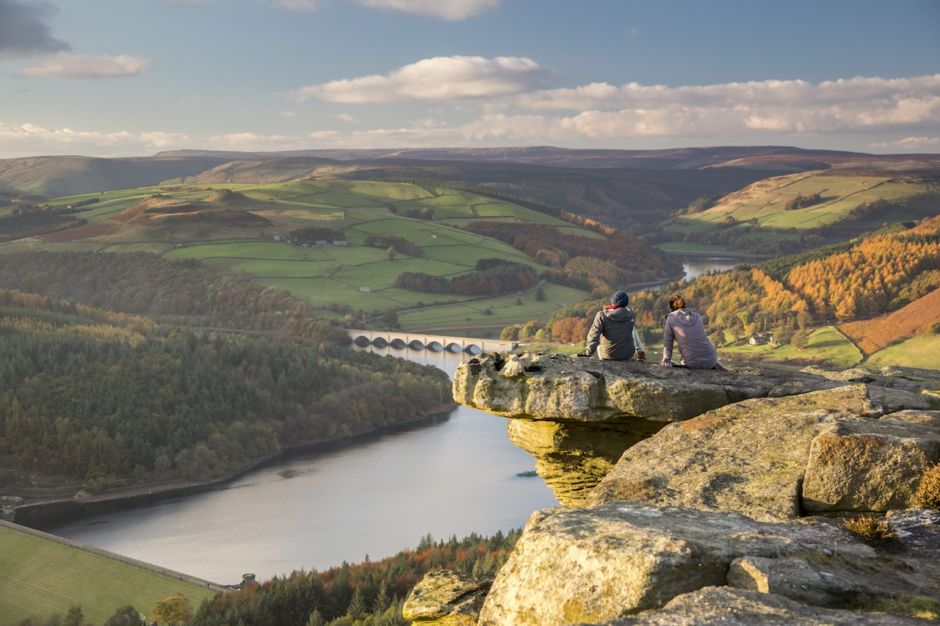 The views are what it's all about.

The Peak District spans a whopping 555 square miles of England's Heartland. Fortunately, the area is home to plenty of viewpoints that let you take in dozens of those square miles at once. Bamford Edge is one of them—and one of the best. Several trails lead to the top of this panoramic spot over the Hope Valley, near the center of the park.
Photo: Visit Peak District 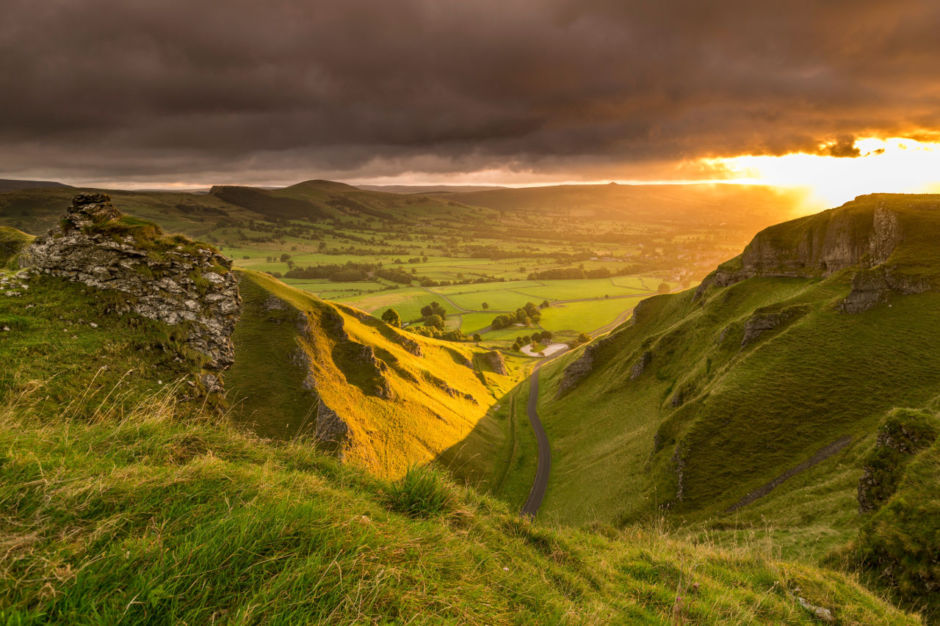 One of the most popular walks in the national park is along the Great Ridge, whose crest separates the Hope and Edale Valleys. From here you can walk to Mam Tor (perhaps the most famous hill in the park), Cave Dale, and Peveril Castle.
Photo: Visit Peak District 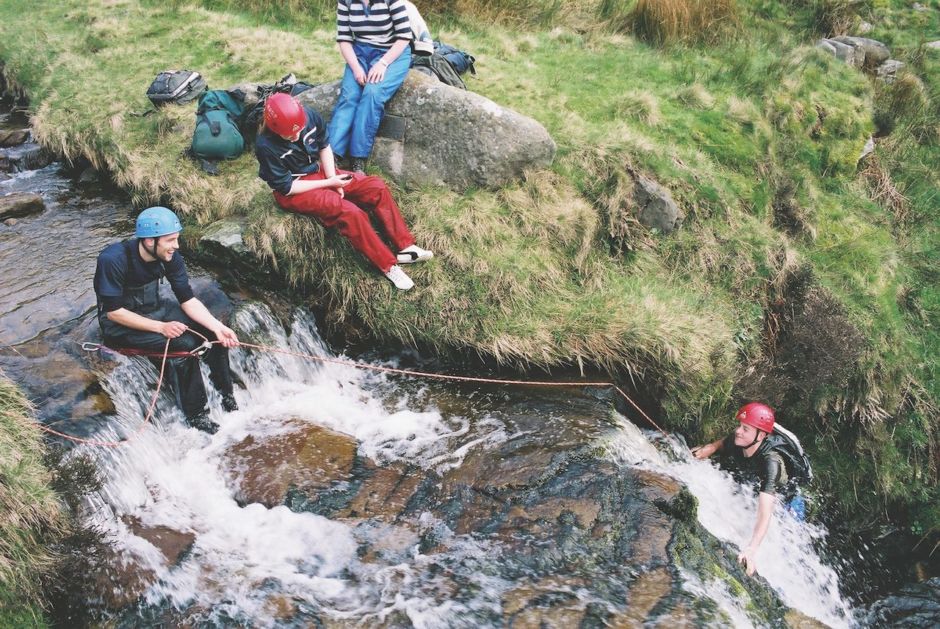 ...but walking isn't the only way to get around.

Why walk through a national park when you can travel via waterfall? Guided by one of the many outfitters in the area, you can explore the park's gorges, natural pools, and cascades...but the best part? When you traverse the landscape this way, the only crowds you'll run into will be the sheep.
Photo: VisitEngland / Peak Pursuits

Travel9 Unexpected Travel Experiences You Can Have in England’s Heartland 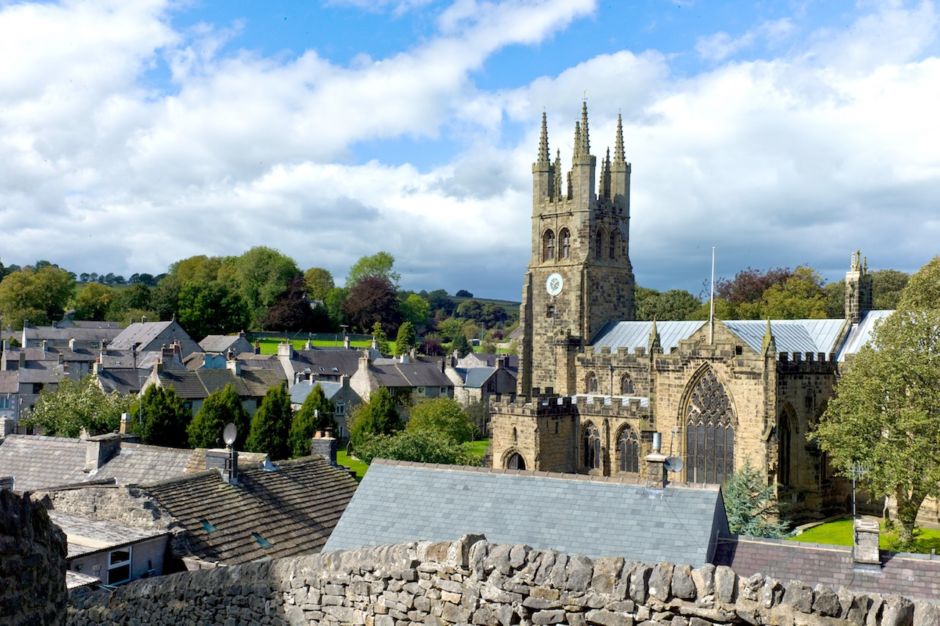 It's not all rolling hills and forest.

Tideswell village, or "Tidza," as the locals call it, has been around the block a time or two. Located near the park's midpoint, parts of this hamlet are old, with history that can be traced back to the 1200s. Stop by the village for a pint or a coffee, and take a moment to get acquainted with the "Cathedral of the Peak," the church of St. John the Baptist. It's been around since the 14th century.
Photo: VisitEngland / Visit Peak District / Linda Bussey 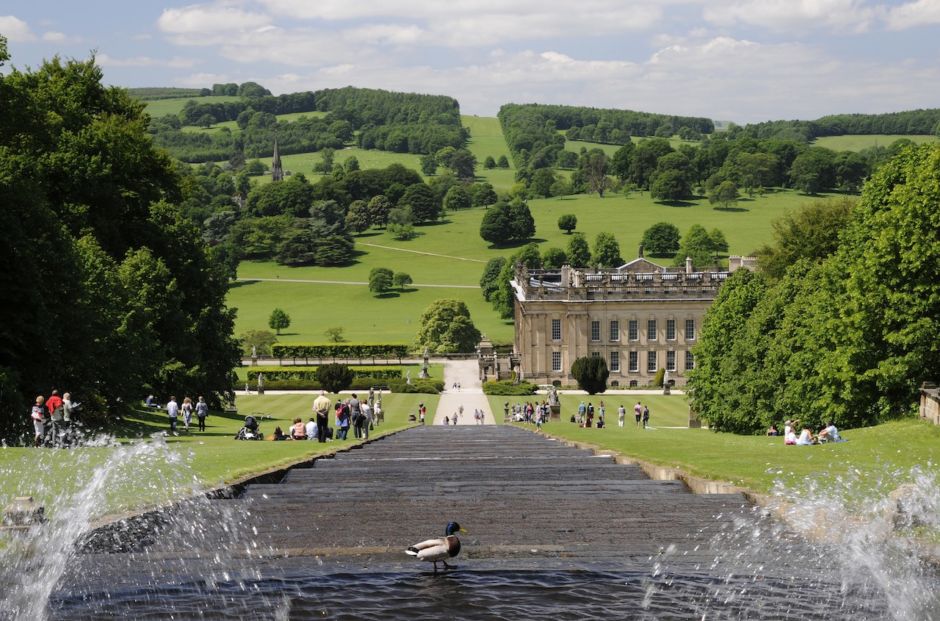 Here, you can tour monuments centuries in age.

The Peak District is home to a number of impressive homes and buildings, including one of the UK's "favorite country homes." Chatsworth House has been in the Cavendish family—the lineage of the Duke of Devonshire—since the 1500s. Rest assured it's as stately on the inside as you'd think. And the gardens? One hundred and five acres, and that includes a maze.
Photo: VisitEngland / Chatsworth House / Matthew Bullen 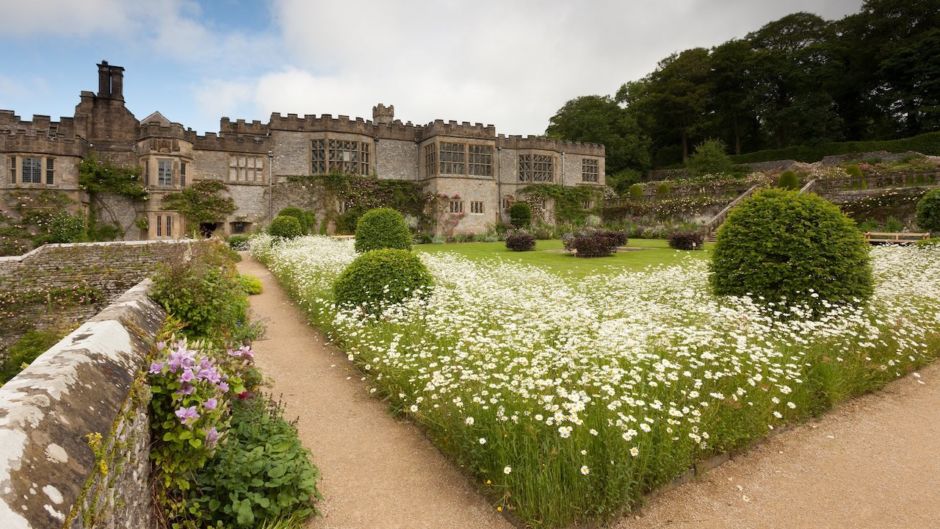 The Peak District brings your favorite stories to life.

If this Middle Ages setting looks familiar to you, you're not wrong—you've seen it in Jane Eyre, Pride & Prejudice, The Princess Bride, and a handful of other period films. With sections dating back to the 12th century, Haddon Hall is widely regarded as one of the most "romantic" homes in all of Britain. Yes, a home. Apparently, life in the Middle Ages wasn't so rough for everyone.
Photo: VisitEngland / Ian Daisley / Visit Peak District 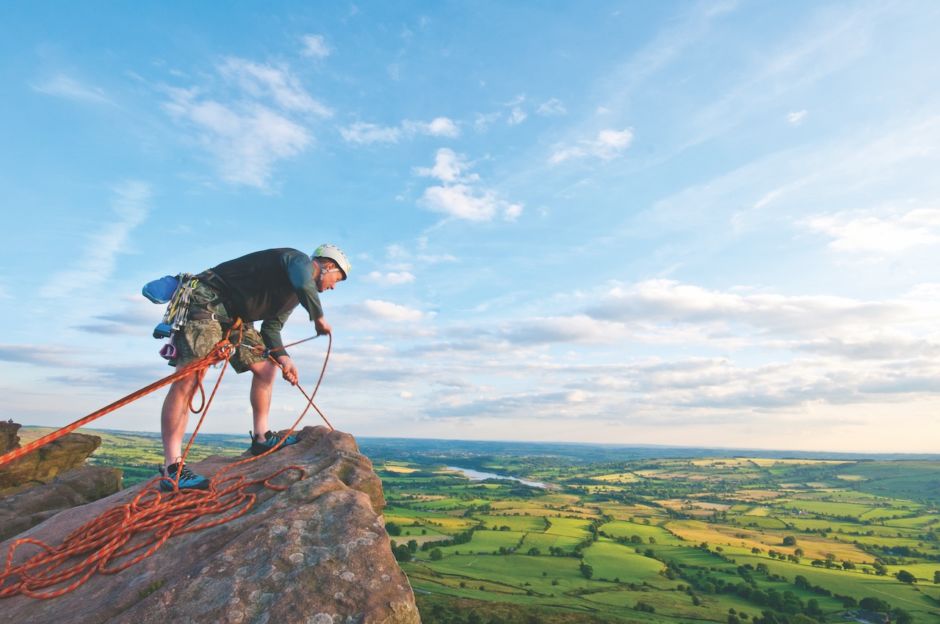 You can scramble on the Roaches...

You've always wanted to "weasel" your way through a natural obstacle course, right? That's the kind of environment the Roaches provide. The Staffordshire Moorlands are full of awesome climbing opportunities for all levels, the terrain being mostly limestone or gritstone. Free climbing is popular, too.
Photo: VisitEngland / Peak Pursuits 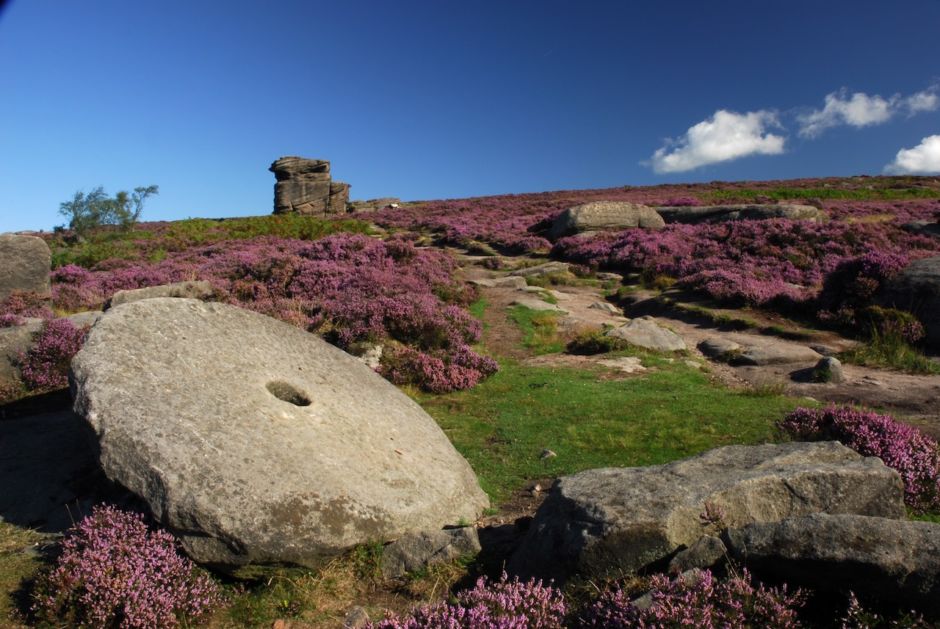 ...or walk in the tracks of glaciers.

Climb Higger Tor from Longshaw and circle back along the distinctive rocks of Burbage Edge—a quick 4.5-mile walk, but one of the park's most rewarding. And in spring? Everything will be cloaked in purple.
Photo: Visit Peak District 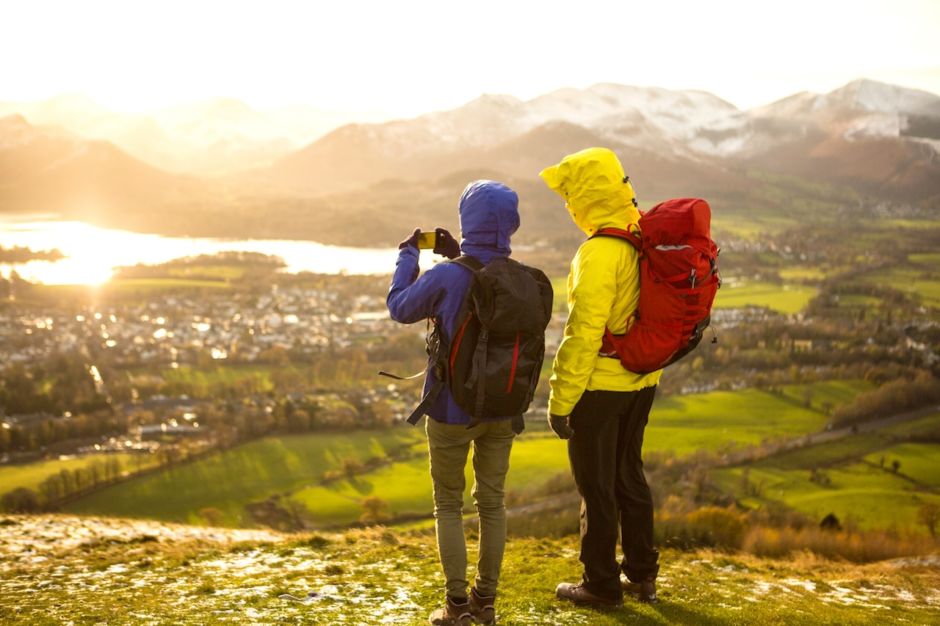 Latrigg, from the Keswick Walking Route

Take the Keswick Walking Route to the top of Latrigg (technically a fell—high, barren hills) and set your eyes on everything the light touches. Orient yourself up here to plan the rest of your day, and see if you can pinpoint Keswick town, Derwentwater, and Bassenthwaite Lake. Not tired yet? There are many more miles of walking trails to explore.
Photo: VisitEngland / Thomas Heaton 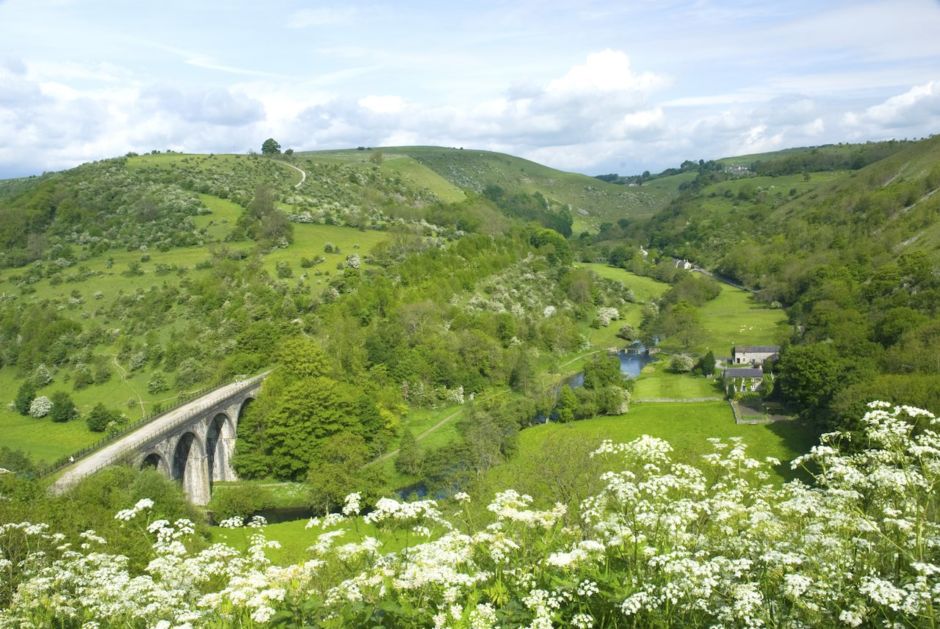 Monsal Head in the Peak District 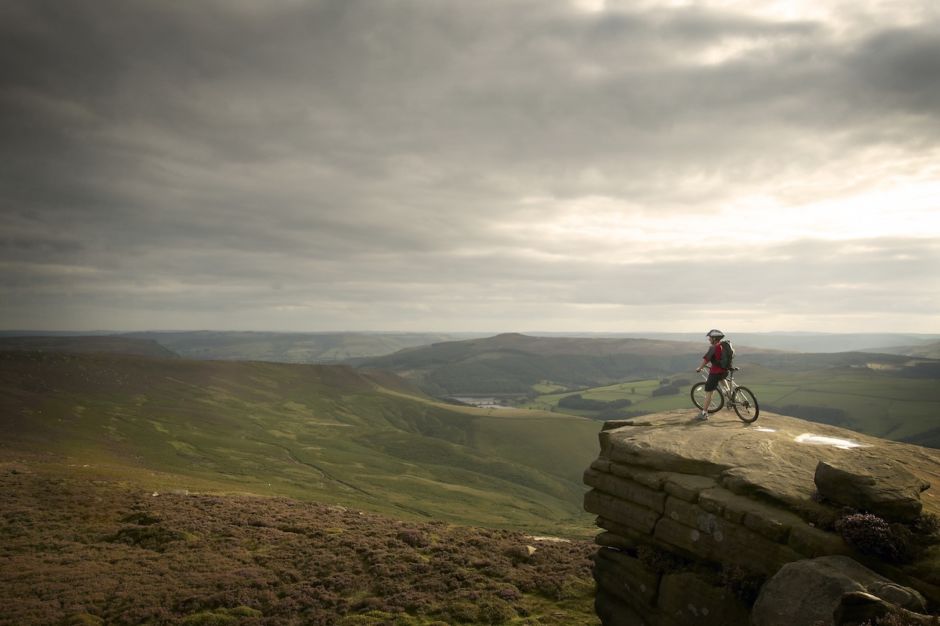 A lone cyclist taking in the spectacular view of the Peak District from the top of Whinstone Lee Tor.

The Peak District was Britain's first national park, established in April 1951. The rich and diverse scenery is a paradise for walkers, cyclists, extreme sports enthusiasts and more relaxed lovers of nature and the great outdoors alike.
Photo: British Tourist Authority 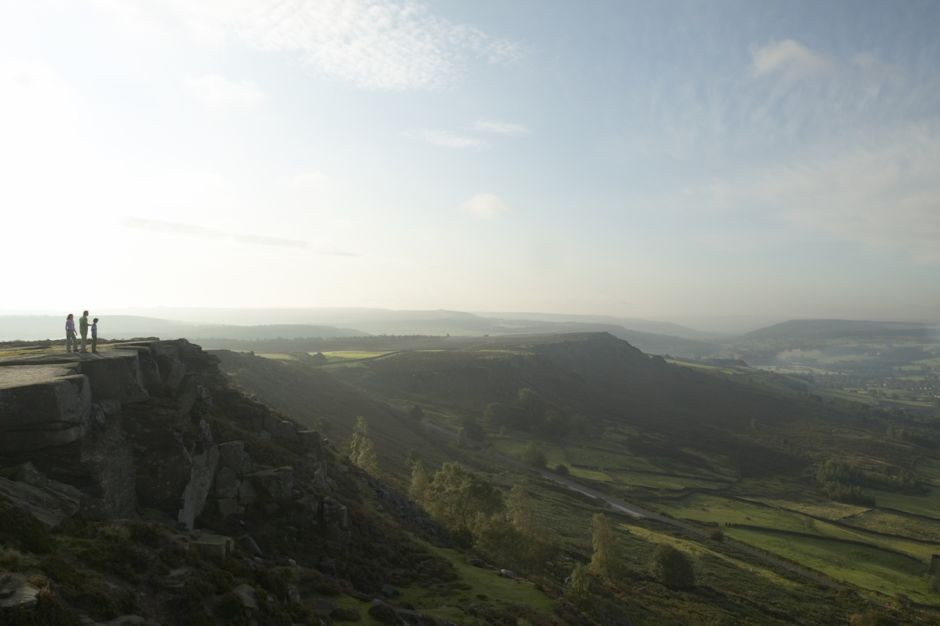 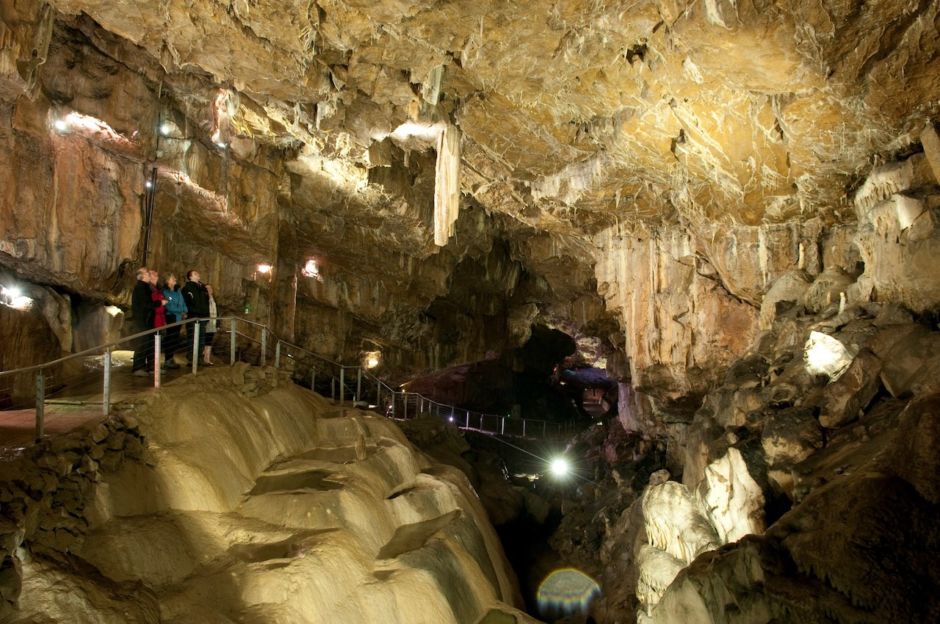 Visitors admire the rock formations at Pooles Cavern in Buxton