My partner and I had dreamed for years of navigating the British Columbia coastline. We wanted to explore the abundant wildlife and wilderness that extends from the rocky shore, and the former fishing and logging outposts that were the backbone of the BC economy for much of the 20th century. And, we yearned to explore the remote stretches of the area above the 60th parallel.

We decided to paddle and peddle from Vancouver to Whitehorse with stops in Southeast Alaska. We’d tow two foldable kayaks behind our bikes; cycle nearly 1000km; ascend 5200m of elevation; and paddle for weeks in areas so remote that we might go days without seeing a sign of human life. We lived our plan in an extraordinary journey, with glaciers and bears outnumbering people, and where tidal charts and weather reports were the only information that mattered.

Editors note. All of these photos are the author’s own and originally appeared on Meander the World’s Instagram. Follow their adventures in real time here: @meandertheworld. 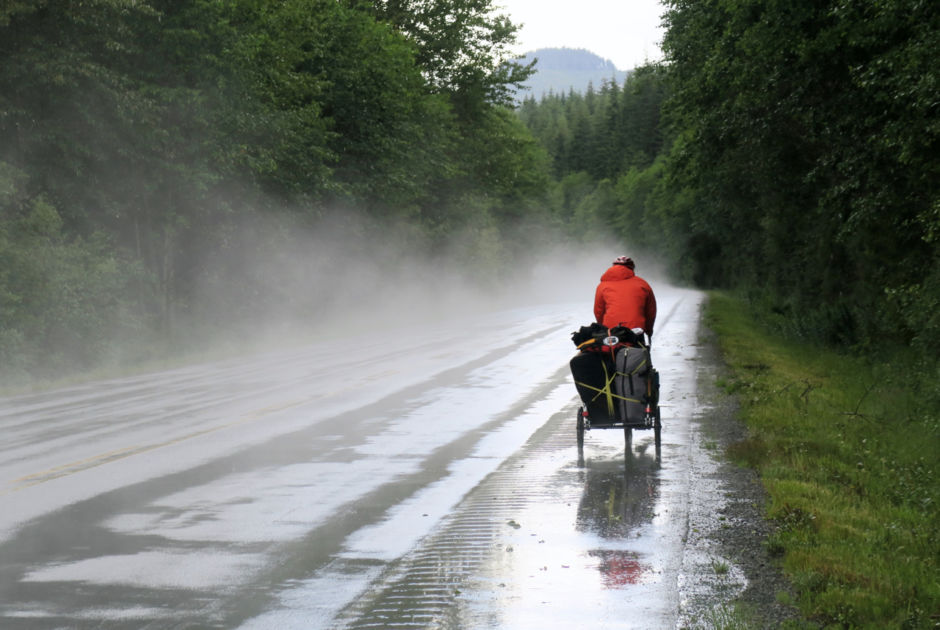 The first part of our cycle journey was on Vancouver Island, a 495km section of highway that weaves through old growth temperate rainforests of Sitka spruce, Douglas fir, arbutus, and beech trees. Rain and hail fell every day. 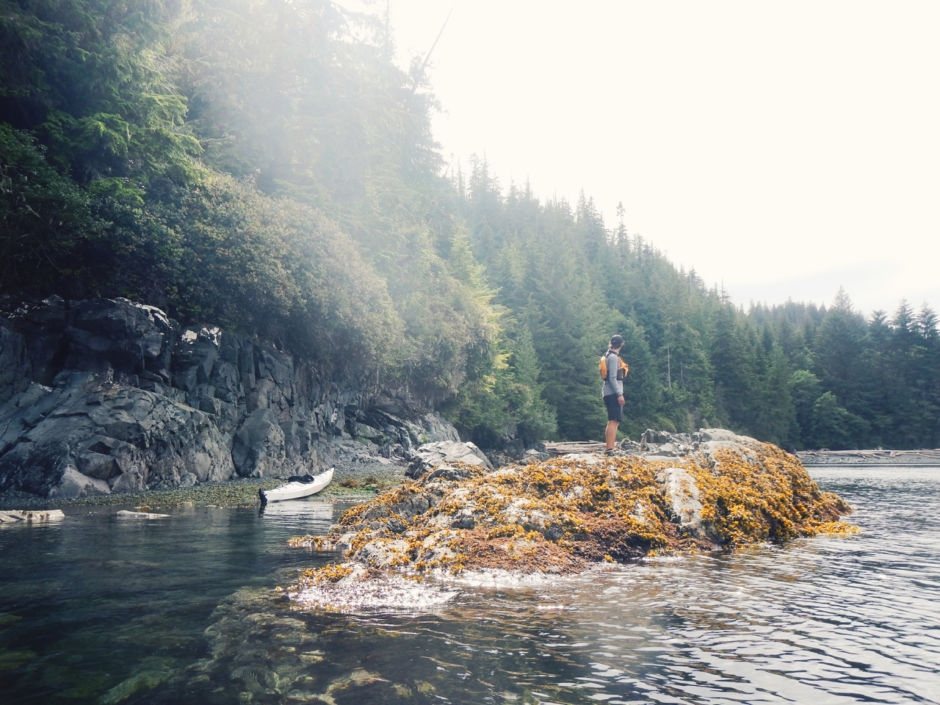 The northern tip of Vancouver Island has some of the clearest cold water in the world and is home to rich marine life in an area known as a "whale superhighway." Base camps for kayaking explorations are easily established on the rocky shorelines across the 110km channel. 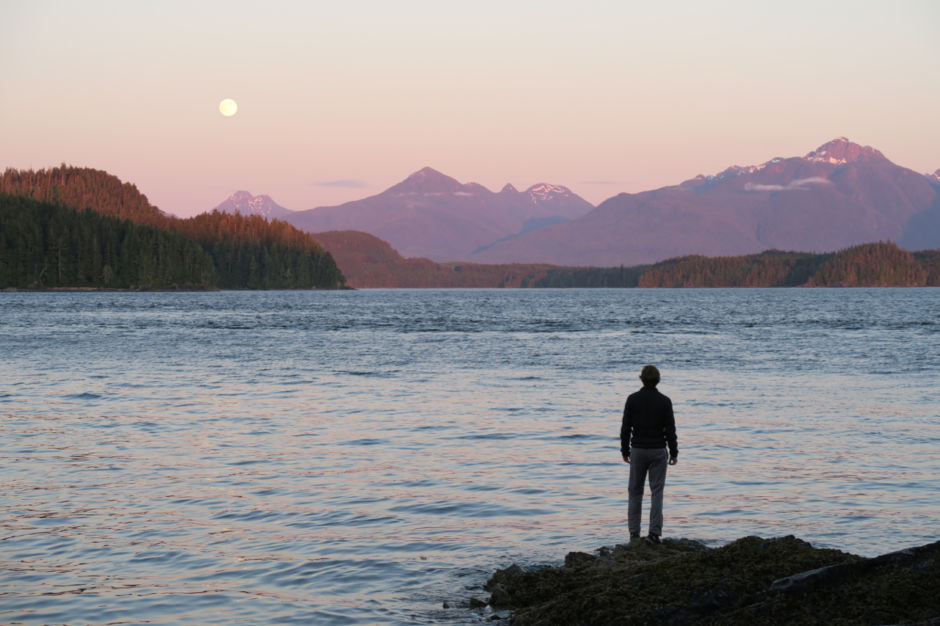 Hundreds of islands dot BC's largest Marine Park, from a little rocky bluff to a densely forested island. We worked with the ebb and flow of the nearly 4m high tidal changes, where the water’s current could turn into river-like rapids in a matter of minutes. Our nights were spent watching the sky turn from gold to pink with a soundtrack of humpback whales breathing, ravens cawing and wolves howling. 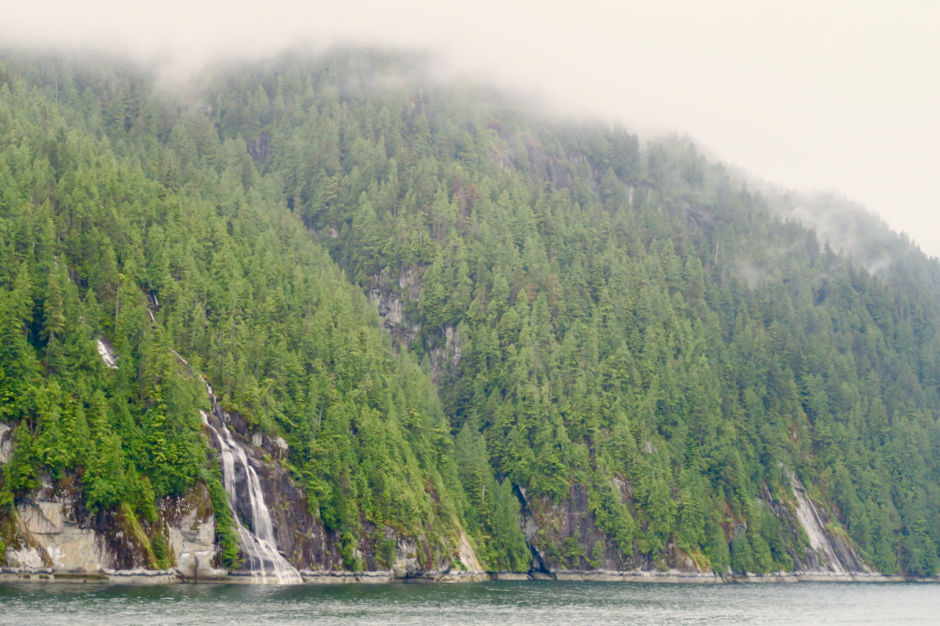 Cruising the Inside Passage, British Columbia

The entire length of the BC coast from Victoria to just north of Prince Rupert is 1000km. With limited time and much we wanted to see, we opted to take the BC Ferries from Vancouver Island, along the Inside Passage and into the Great Bear Rainforest.The inland sea route follows narrow channels where dense forest broken up by abandoned pulp mills, lighthouses and glacier-fed waterfalls. 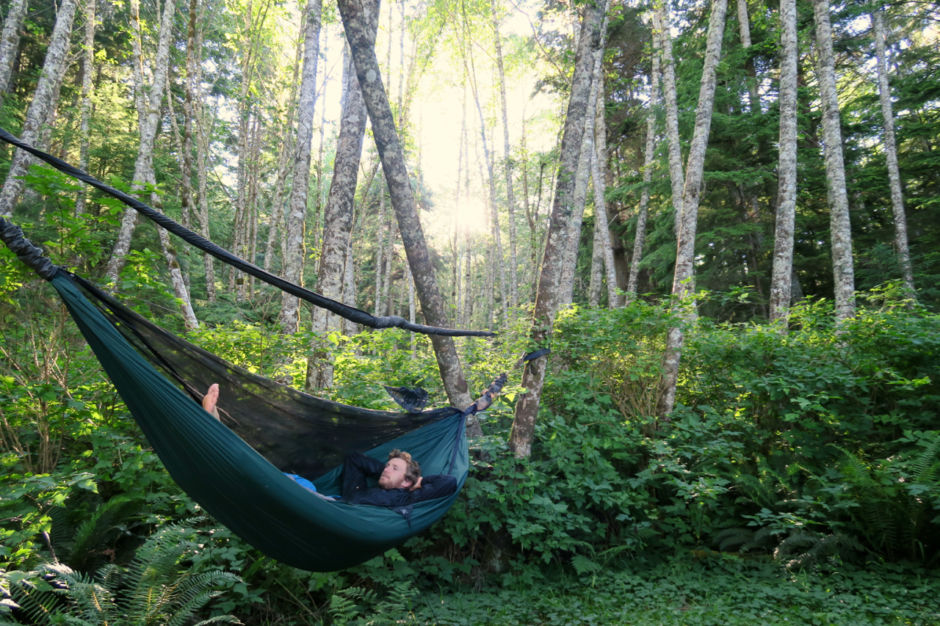 Home is where you hang it, Great Bear Rainforest, BC

The Great Bear Rainforest has few beaches. Any exposed cliff is submerged as the tides change. We’d paddle 20km to find any viable shoreline, only to find that the ground surface was too rough for camping. We began looking beyond the rocky bluffs to hang our hammock in between the giant cedars, or lanky red alders. 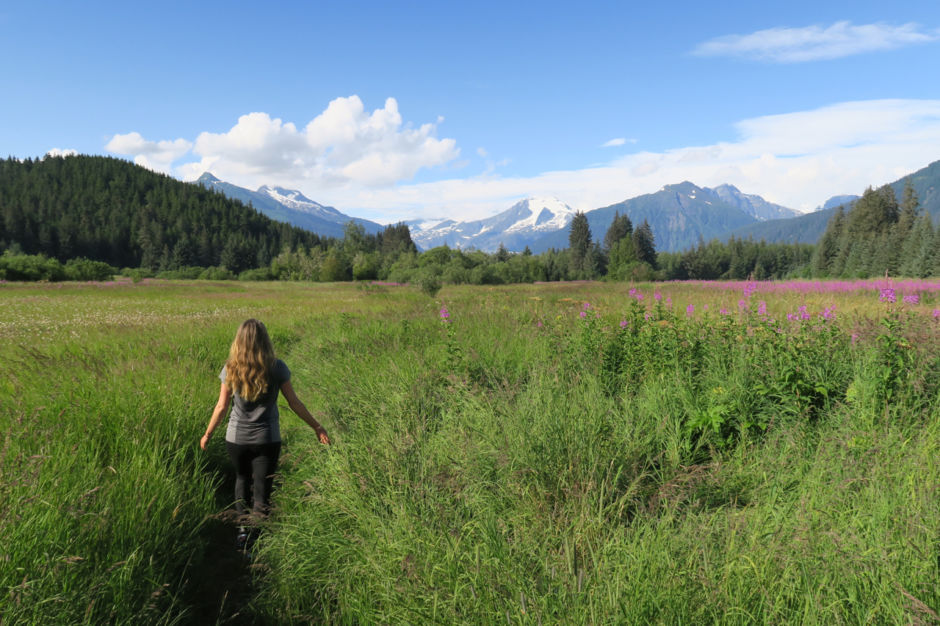 Away from the cruise port we found trails that meandered through wildflower-filled meadows and a deep valley, leading towards glacially capped Tongass National Forest peaks and mountainsides. 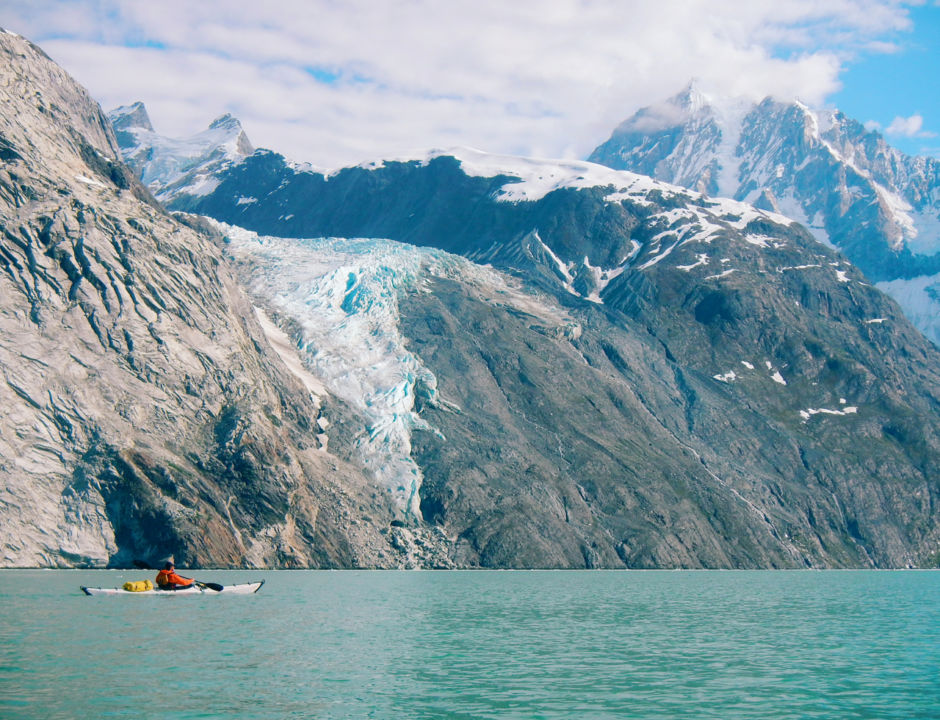 Glacier Bay. from the forested hillsides at the mouth near Icy Straits to the absolute wilderness found 63 nautical miles within the bay at John Hopkins Glacier is wildly diverse: emerald and topaz waters; glaciers cascading from mountain tops; sheltered inlets filled with feeding whales; seals floating on icebergs, sea lions sunning themselves on rocky outcrops and bears searching the shoreline for their next meal. 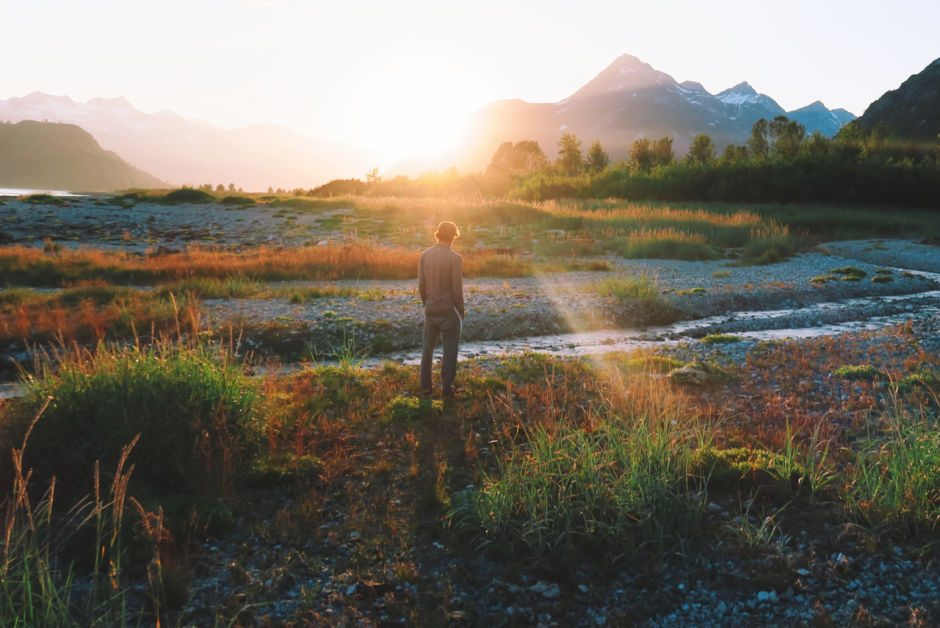 Before starting on a backcountry adventure in Glacier Bay, one must attend a ‘Bear Safety Meeting’ with rangers: tents need to be positioned high on the shoreline to avoid being washed away with the changing tides, and everything from dining to bathroom breaks must take place in the intertidal zone. Leave no trace, keep all items with scents locked away, and take only photos. 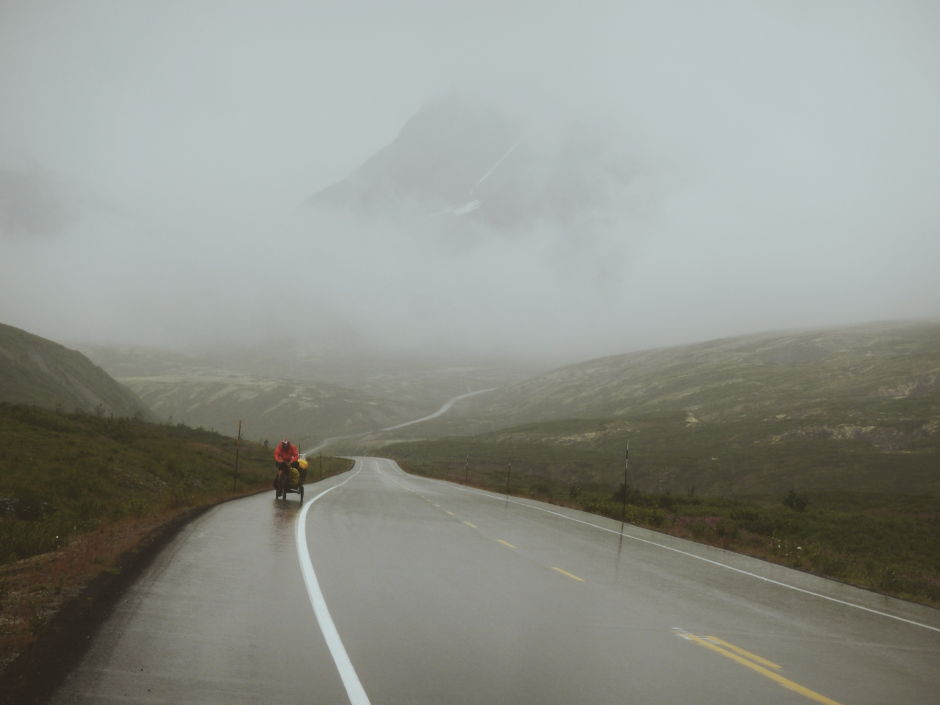 Thousands of thousands of prospectors during the Gold Rush arrived on the shores of Haines and Skagway, Alaska to make their way over the mountains into the Yukon.We followed the historic Dalton Trail, towing well over 200 lbs in gear and food, and cycled the Haines Highway for over 245km of road in pure solitude. The highway climbs above the tree line into the alpine where rolling hills are flanked by some of Canada’s highest peaks of the St Elias mountain range. 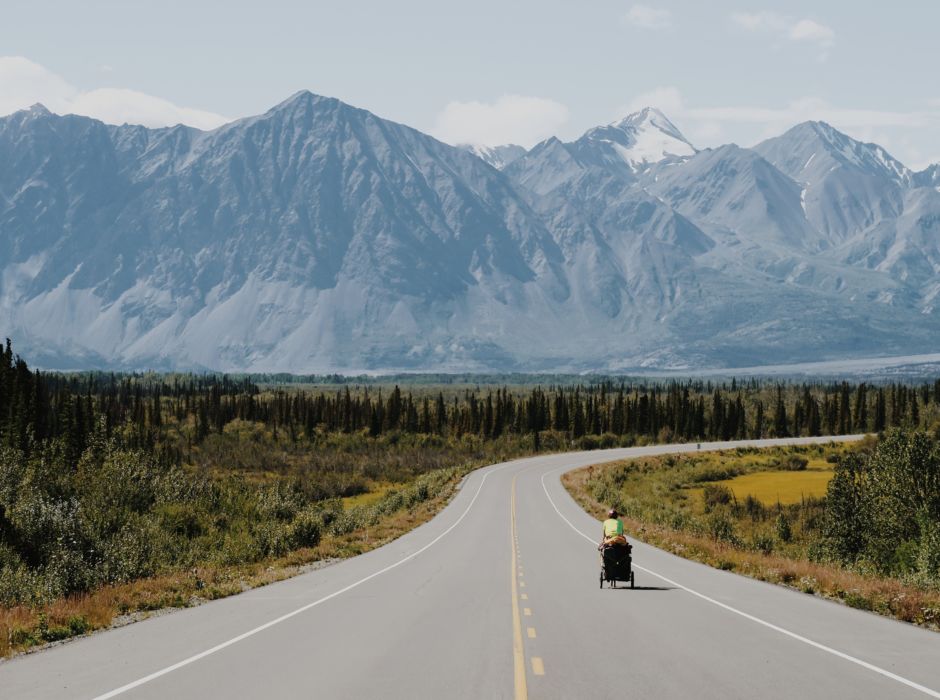 Cruising downhill on the last stretch of our journey, into Haines Junction, a town of 900 is the Yukon’s 4th largest community, we felt relief and joy. The town acts as a basecamp for explorers into a region with Canada’s largest grizzly bear population; sprawling icefields; Mt. Logan, the highest mountain peak; countless glacial lakes - and borders the world’s largest contiguous protected park land. Haines sees an absurd amount of summertime RV traffic cruising the 2200 km-long Alaskan Highway - as well as a few crazy cyclists.