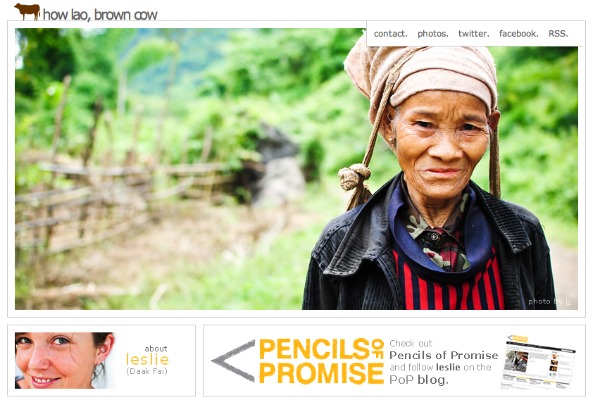 These are the truly great expat blogs; the ones you can visit over and over. For sharp writing, quality photography, or wry humour, these blogs stand out from the pack.

[Editor’s note: The following expat blogs are not listed in any particular order; the list is not meant to be a ranking but rather a varied collection of expat blogs from around the world.]

Leslie Engle’s blog about her life and work in Laos is hilarious. Her photos are bright and simple, and she writes thoughtful posts like Mama You’ve been On my Mind, about family in Laos. Leslie works for Pencils of Promise, and writes with energy the grassroots changes that are happening with Laotian education. One post I particularly liked, about the frustrations of learning a language more slowly than you’d like, weaves wit into exasperation. Funny, funny stuff.

Mexican-American freelance writer Lesley Téllez takes delicious photos. You could say her site is a food blog, with great, witty recipe narratives like this Chile Mora Salsa. I’d call it a sensory site for Mexico City; bright photos, simple fresh food, and, in one post, the sounds from the street.

UK-born Danny Choo works in software in Tokyo and takes bonkers photographs too. Choo’s Japan is electric, eclectic, and frantic in the best possible way. His Tokyo photo walk series is a balance of sparsity and density on the city’s neon streets. He also snaps a series of anime characters that is, funny, creepy, or sexy, depending on your cup of tea. 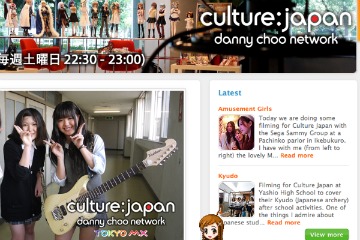 Celeste Brash is a travel writer who, until one month ago, lived in Tahiti for 17 years. She writes about traditional dance classes, Tahiti’s vineyards, and a great series on traveling French Polynesia by supply ship; road-trip style narratives about confused schedules and dolphin-spottings. A standout photo is Jam Session at the Tahiti Immigration Office, a quick but potent look at French Polynesian character.

This expat blog is by couple from Oregon who live and teach in Taiwan. I love the crowded photos of bright markets and moody cafes. Mostly, I love the fact that this blog is put together with zero pretentiousness. No backpacker bragging, no expat smugness: just pert, honest writing.

They cover the basics of an international teacher‘s everyday life; from oddly-flavored candies to the items they wish they had packed. If I were planning a move to Taiwan, I would comb this blog for tips. A favorite post: the simple photo of a tutu’d Taiwanese girl celebrating her birthday.

6. How to Learn Swedish in 1000 Difficult Lessons

I adore the format of Francis Strand’s expat blog. Each untitled entry tells a daily anecdote in the American expat’s life in Sweden; a strange phone call at work; observing two young men making eyes on the bus, a new landscaping project.

Each post concludes with a Swedish word of the day, an often wry one-word summary of the piece. My favorite post is the story of getting stuck in the ice during a Baltic boat ride. The word of the day? En förbannelse. It means a curse. 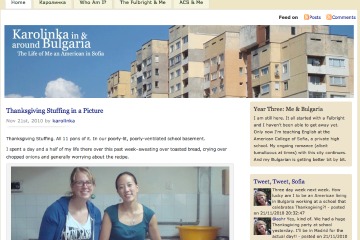 Karolinka in and Around Bulgaria

I love stories like American Carolyn Emigh’s, when a student moves to a new country to study for a semester or two, and ends up staying for years. For Emigh, studying has turned to teaching ESL. During her third year in Sofia, she explores the countryside and small towns with all the zeal of a backpacking undergrad. The enthusiasm and pretty photos from Rhodopes in Autumn can be triggers of wanderlust.

Liv is one funny writer. She spent three years teaching ESL in Japan and writing. Now, she’s living in her ancestral Italy, blogging with quick candor about stick shift driving lessons and noisy neighbors. One of my favorite posts is about cleaning out a wallet and unearthing travel mementos. Heartfelt but still witty.

Also, Liv’s Mini Japanese Culture Lessons are hilarious and helpful. I love her description of the Japanese “eeehh?”

9. Touching up my Roots

This expat blog tracks an American family’s sabbatical in Croatia, where they trace their family roots. Each family member has their own page, giving the site a range of voices. Husband Jim narrates the food adventures. The kids blog about homeschooling and skiing for the first time. Wife Jennifer writes simple, vivid notes on everyday Croatian life, like in Starting Each Day with the Strike of a Match.

Conner Gorry is an American journalist based in Cuba, whose writing is sharp and self-aware. A sample: “If you’ve ever wondered what it’s like to kiss on the Malecón, go to the doctor for free, smoke tasty 5 cent cigars,  or forgoe toilet paper for months […], welcome to Havana.”

Her vignettes on relating to the neighbors and battling bugs are honest and beautifully written. I loved Keeping in Line, Cuban Style, a post about queuing for food rations in the aftermath of a hurricane. Her account of the hungry crowd is compassionate and dignified. 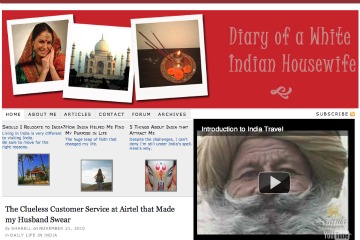 Diary of a White Indian Housewife

11. Diary of a White Indian Housewife

Sharell Cook writes about her life as Australian career woman-turned-housewife living in India. It’s fascinating to read her impressions of Indian gender politics and cross-cultural marital expectations. Her posts are mostly brief and candid, but my best-loved post was a longer account of a dinner party, where her frustrations don’t tie up in a neat ending. She notes, “My experience with India is very changeable” – I’m guessing all expats and travelers can relate!

12. From My Swiss Window

Tracy (alias Pumpkin Pie) is an American expat living and raising children in Switzerland. In this expat blog, she keeps amazing photohgraphic accounts of everyday life. There are no postcard shots of alps or cuckoo clocks here. Instead, her eye goes to simpler places like a children’s park or a hidden water fountain. Saturday in Zurich was a favorite post of mine. Tracy also writes honestly about homesickness, for her a feeling brought on by simple events like changing seasons.

Canadian Maryanne Stroud Gabbani moved to Egypt in the 80s with her husband and children. She writes with candor about Egyptian news and politics, such as altered photos in the media or the misconceptions of women’s social roles. Having been an expat for over two decades, Gabbani writes smart, hopeful observations about the social changes she sees in her adoptive country. She also writes about her everyday life; her family, her work in tourism, and her farm.

“Suzy Q” is an American working at an NGO in Lebanon. Many of the posts are smart editorials about global relations, Lebanese elections, and cross-cultural riffs at work. Sometimes, she also writes subtle, lyrical pieces about life in Beirut, like in her account of the city’s transition to spring.

American writer Margaret Snook, who lives in Santiago with her Chilean husband, blogs with love, big time. It’s clear in her writing that she adores Chile, and I admire her tireless interest in unfolding and understanding her adopted culture, from new bits of slang to the cultural history of simple childrens’ toys. I enjoyed her post about reverse-culture shock – when “home” doesn’t feel like home, and she felt like “the oddball self-appointed quasi-Latina member of the family.”

Alexis Okeowo may not be a stationary expat, but her photos from living in East Africa and Mexico are exceptional. She observes people, individuals and groups, musicians, models, and crowds on the street. I love the simple, on the surface piece titled South Africans and their Bikes. Okeowo also writes with passion about the politics of her former adoptive countries.

17. Separated by a Common Language

American university lecturer Lynne Murphy (“Lynneguist”) writes a fascinating language blog about the differences between British and American English which come up in everyday tasks, like a visit to the butcher or a mother-daughter trip to the beach. Sound too academic? She’s a sharp writer for sure, but a good one; even non-linguists can appreciate the bits of dry, decidedly English humor. Sample smile-to-myself line: “There’s nothing un-American about the perfect tense.”

Angela Corrias, an Italian freelance journalist/photographer, moved to Shanghai where she writes about her language classes, adventures in Eastern medicine, and bug vendors. Many posts open with a proclamation from her zealous-sounding Chinese laoshi, letting the reader act as fly on the wall to these cultural lessons. My favorite post is Settling in Shanghai: easier said than done. The writing is frank, but never in a kvetching way.

American chef, cookbook author, and Paris-based expat David Lebovitz’s blog should not be read on an empty stomach. His blog contains restaurant reviews, cultural tips for dining out in Paris, and simple recipes like baked pumpkin. Lebovitz stands out from the cooking blog herd because he’s not a gushy foodie or an acerbic Anthony Bourdain imitator.

He writes frankly, with bottomless knowledge of food and the culture of French cuisine. I had no idea there were unspoken French rules about when to butter bread!

I’ve never met Kate Bailward (aka Katja), the British ESL teacher who blogs about Italy at Driving Like a Maniac, but I imagine she talks just as she writes; familiar, candid, and rapid-fire funny. I especially loved the foodie account of Christmas celebrations and hilarious student character sketches in Make ‘Em Laugh.

What are some of your favorite expat blogs? Are you an expat blogger? Share the link and a short description of your blog below.

* For blogging tips, check out the curriculum of the MatadorU Travel Writing program.