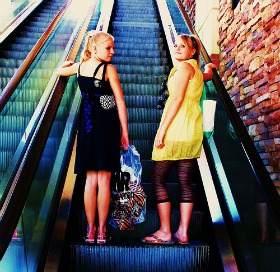 Swedish – [la-gum] While it translates into English as “enough” or “just the right amount,” lagom refers to more than just amounts.

Author Alan Atkisson sees this word as a concept around which Swedish society is organized – one that could help combat the American consumer frenzy.

Tok Pisin – [WAHN-tok] In this creole language of Papua New Guinea, wanktok refers to people who speak the same language as you do and “have some claim on you.” It translates literally as “one talk” and usually includes people of your family, village, clan or larger geographic area (Moore 123).

Early English – [SNORK-er] According to an 1808 English dictionary, snorker is an insult that means “one who smells at objects like a dog” and implies getting into other people’s business (Dodson 11).

Sanskrit – [LEEN-gum] “The symbol of the erect penis as an object of veneration” (Rheingold 87).

Alright, so in English we can say “phallic object,” but that has a much more Freudian feel to it and it’s not always positive. A lingam is an object of worship, often connected to the Hindu god Shiva, and you can find lingam statues draped with flower garlands in many Indian villages.

Korean – [yung] – “A special feeling…that is stronger than mere ‘love’ and can only often be proved by having survived a huge argument with someone” (Moore 91).

Japanese – [wa-bi] – “A flawed detail that creates an elegant whole” (Rheingold 95). The word rhymes with “Bobby.”

Italian – [PON-tay] While it literally means “bridge,” this word also refers to an extra day off taken to make a national holiday falling on a Tuesday or Thursday into a four-day vacation.

Hopi – [koy-on-iss-KOT-see] This Native American word means “nature out of balance” or a “way of life that is so crazy it calls for a new way of living” (Rheingold 243).

Chinkook jargon – [POT-latch] “An opulent ceremonial feast (among certain North American Indian peoples of the north-west coast) at which possessions are given away or destroyed to display wealth or enhance prestige.” (Oxford English Dictionary)

French – [frawt-ER] “Individuals who get their jollies by rubbing their crotches against the buttocks of women in crowds” (Rheingold 89).

Unfortunately for me, I can think of several times when this word would have been useful; none of those incidents happened in France though.

Do you have equivalent concepts for these words in your language, or any other language you know?

For more fun with language, check out 20 Obsolete English Words that Should Make a Comeback.

Prev Page
What did you think of this article?
Meh
Good
Awesome
Bookmark
Posted In
Languages