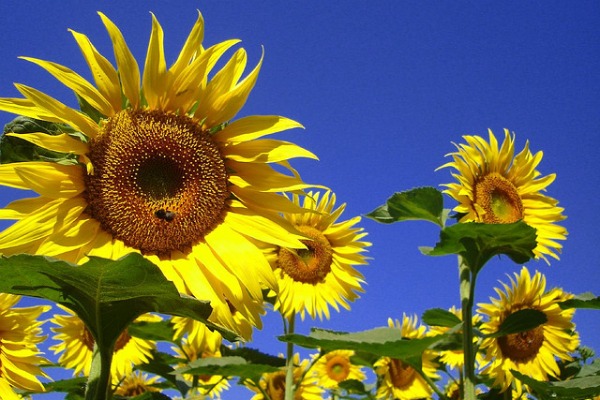 Peace Corps volunteer Chris Miller shares about his life as a teacher in Ukraine.

Fields of golden sunflowers, their blooming heads bowing to the sun, line the pot-holed roads that wind their way through the rolling steppe and disappear in the haze at the horizon. I try to remain focused on them instead of the factory smokestacks as the number 35 marshrutka bounces its way toward the Red Village.

I’m quiet on the marshrutka, as not to make it more apparent that I’m the lone American in this small eastern Ukrainian town. It’s already enough that I wear a week’s worth of scruff on my face, my hair over my ears and a one-strap Timbuk2 bag over my shoulder. The cultural norm for a young man my age here is to be clean-shaven with well-kempt short hair. And if anything at all is to be carried, it should be carried in a floral-patterned shopping bag held at your side.

The marshurtka jerks and passengers toss about between frequent stops. Being inside one of these is like being trapped in a human pinball machine. Someone closes the air vent, fearful that the draft will make them ill. The temperature climbs and suddenly it feels as though every inhalation is someone else’s exhalation. 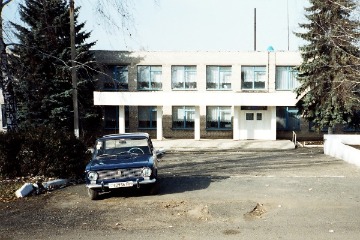 When we stop at the edge of the market a young student of mine, Bogdan, boards with his mother. He smiles at me and I notice his large, crooked and gapped teeth. He runs to hug me, and my cover is blown when he calls me Mr. Chris America. Passengers throw their heads in my direction and the questioning ensues.

Where are you from? Why are you here? Where do you teach? What do you teach? Are you a spy? Are you married? Would you like to marry my sister’s daughter?

When I enter the small Red Village School I’m bombarded with hellos and handshakes. I enter the time of my arrival into the ledger – 8:00 – and sign my name in Cyrillic. The school psychologist, who doubles as the second English teacher, is already in our shared office. I catch her as she takes a drink of tea, and as if it can’t wait another second she tells me with a mouthful that I’ll need to teach six lessons today instead of my usual three. On top of this, I’ll have one phys. ed. lesson and afternoon English club.

Between fourth and fifth lesson the teaching staff meets in the teachers’ lounge to drink cognac and eat cake in honor of someone’s birthday. Everyone gives a toast, nobody leaves till the bottle is polished off.

At the end of the school day I’m asked by my fellow teacher and former KGB operative, Nikolai, if I’ll consider mentioning him in the next column I write for the town’s newspaper. He tells me he’d like me to write about the camping trip he’d planned and executed. He says something else, too, but his dentures slip and I can’t understand what it is.

The marshrutka commute back into town always feels longer. I get off at the city center stop where statues of Lenin and revolutionary leader Artem, for which the city is named after, stand. Babushkas solicit their preservatives in the main square, while men ask if I can lend them cigarettes. A man drinking a beer holds his child’s hand as they cross the street together. Trolleybuses rattle past, while policemen flag down a car using illuminated orange sticks. The driver pays a bribe and is again on his way. 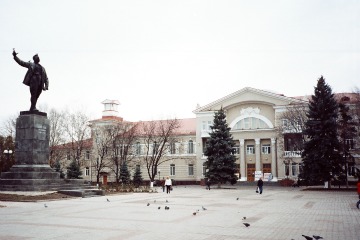 I stroll past the bazaar, the orphanage and the moped shop, down Sebertseva Street and climb the four flights of stairs to my modest two-room apartment. The neighbors to my right are having another loud dispute, over what I don’t know. All I can make out are the swear words. Through the wall to my left come the sounds of Russian hip-hop and a television news program. I want to cook and start some laundry, but the water hasn’t been turned on yet. I’ll have to wait an hour before I do anything.

The city clock chimes 12 times at midnight. With laundry finished and lessons planned I crawl beneath the blankets of my single bed. Out the window I watch the streetlights flicker and then go dark. The barking of feral dogs tapers off and I slip into sleep.

This article is part of Matador’s Day in the Life of an Expat narrative series. Check out the archives to read about expat life in cities around the world.

Have a story to share? Read about our current submission calls and writers’ guidelines on Matador Abroad’s about page.

For solo female travelers, camping alone can be unexpectedly freeing
Forget Bali and Tulum. These are the next big beach destinations for wellness.
The Hunt for Beyondland: The Great American Family Road Trip
7 spectacular national parks to visit this fall
What it really means to identify as Two-Spirit in Indigenous culture