View all travel news
Top Destinations
Top CitiesView All Destinations
Trending Regions
Trending Cities
Load More
These days, mornings begin with fledgling family of kookaburras ushering in the dawn from the gums outside the bedroom window.

It’s 5:34 and the glow of day is just beginning to show above the curtains. As the light creeps over the Howe Range, the surrounding bush fills with the morning calls of Bell birds, Crimson Rosellas and Rainbow Lorikeets. I lie in bed for an hour and listen to the parrots squabbling and climbing on the roof. It’s early December and the days are long.

Six months ago in July, instead of birds, we were subjected to the shriek of alarm clocks in the frosty winter darkness and shivering trips to the woodpile to stoke the fire that had burnt down to coals over night. I relish the long, warm days of summer.

Two years earlier, a diver survived being swallowed head first by a Great White only a few kilometers down the coast.

In summer, the beanies and heavy jackets aren’t necessary as my husband, Brett, gets up to check the ocean conditions to see if he can work today. Brett is a second generation abalone diver. He harvests nearly 20 ton of abalone a year from our little zone in far Eastern Victoria for export to Asia. His is a dangerous job with medical hazards such as the bends caused by long harvesting dives at depth, no proper safety regulation, the unpredictable Tasman Sea, and abundant sea life.

Two years earlier, a diver survived being swallowed head first by a Great White only a few kilometers down the coast. Luckily the animal’s teeth had closed on his lead weight vest and it was unable to bite through. The diver was able to escape with his life after stabbing the shark in the eye with his abalone iron. They breed ‘em tough in these here parts.

I get up and make a cup of tea and some toast with homemade marmalade from our backyard lemon tree. There’s a clean but consistent little 5 foot swell (3 feet in Australian terms) from the South West which makes it too swelly and unsafe to head out for a dive. Brett returns long enough to down some toast before we load our boards and wetties in the car in search of a good sandbank. 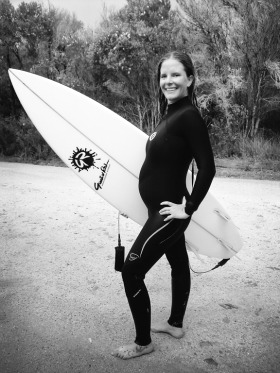 Our morning surfs are getting more desperate for me. I can see a day looming in the near future when I’ll be forced to retire my shortboard to the shed. I’m only five months pregnant, but already the growing lump in my belly is making it hard to paddle. It feels like I’m laying on a cantaloupe and can’t stop picturing a baby with a completely flattened head every time I dig in for a wave. I’ve tried stuffing a partially inflated beach ball into my wettie as padding, but I can tell my days are numbered.

Brett and I swap waves at deserted Tip Beach for an hour before another diver paddles out to join us. They say Mallacoota has 900 residents, but I fail to see how there could be that many people hiding in this tiny fishing village. Generally we only have to share the beach with the resident Sea Eagle and occasional pod of dolphins or penguin from the rookery offshore.

As usual, the wind comes up onshore from the souwest and we take one to the beach. At home, we fry up some bacon and eggs, check our email, hang the washing on the line, and water the veggie garden. I get back to work on a quilt I am making for what will be the baby’s room.

I always shake my head when I examine my life here. In the not too distant past I was living in the city in California, finishing up a graduate degree, blissfully unaware that I would one day be a bottling jams, sewing, growing my own food and getting ready to pop out a baby in a foreign country.

I finish the top layer of my quilt by lunchtime. Brett is watching the cricket on TV. Australia is getting walloped by England in the second Ashes test. The early part of the afternoon is spent berating the dismal Australian side for their dropped catches and their inability to get a wicket. Not a fan of the game myself, I persuade Brett to come down for a fish off the beach or to chip some mussels off the wharf for dinner. 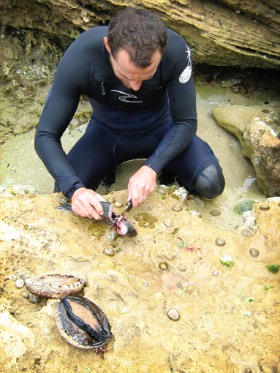 On the hot days, everyone is down at the point – taking their kids out on foam beginner surfboards or kicking back with a beer in the shade. We end up chatting with friends and going for a body surf after an unfruitful five minutes of casting. Time gets away from us and before we look at our watches, it’s past 6:30 – the grocery store is already closed for the evening.

Luckily, there are enough veggies in the garden and our freezer holds the better part of a cow we’d purchased from a local farm earlier in the year. It’s still hot so we eat dinner on the balcony. The afternoon’s heat has generated a thunderstorm that is starting to roll in from the west.

Ten minutes later it’s pissing down rain. It’s cozy listening to the droplets clatter on the tin porch awning and we turn up the iPod speakers. Tomorrow I would get around to updating my wedding photography website, and I get those pictures retouched. The guilt of having shirked my few responsibilities sits for a moment and passes.

Read more in Matador’s Day in the Life of an Expat narrative series or check out the Australia Focus Page.

Tagged
Expat Life Australia
What did you think of this story?
Meh
Good
Awesome