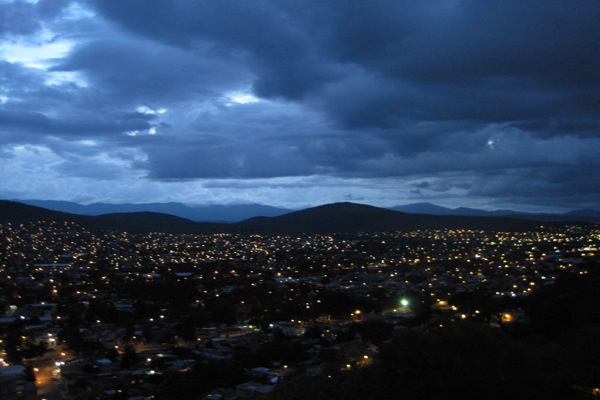 In response to that constant question I get when I go back to the US – “but what do you do?”

Wake up. Take the dog out, stroll down our cobblestone street that rises up slightly from the city, allowing a view of early morning clouds rising over churches. It’s chilly. The light is subdued shades of whale white and blue, sometimes a faint orange edging its way in at the horizon.

Come back inside, make coffee. Write. Try to ignore my email as long as possible. 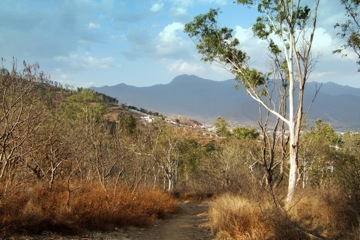 Take the dog running. Up the brutal arching back of the Cerro Fortin to the dirt road that winds around the mountainside and up and up with a view of the pine-coated Sierra Norte to the north and the expansive yellow-green valley to the south.

There’s nobody up here at this hour. Let the dog off of the leash, think about how crucial running is to writing, how it’s this necessary physical and mental release. 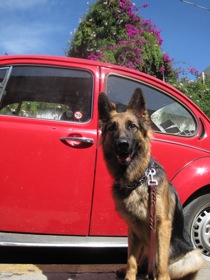 Go to the market for juice. “Amigocha!” shouts the juice guy, “how’s the Stella?” Stella is panting on the market floor. He blends fresh orange and mandarin juice, sometimes with strawberries. People shuffle in and out of the market, in and out of the rising sun and the shade filled with smells and heaps of food; huitlacoche, chicozapotes, epazote, yierbasanta, things you can’t find in the U.S.

I buy avocados from the same woman everyday. She’s curt but sometimes she gives me a fourth for the price of three.

Huevos con chipotle, our current brunch of choice. Brunch is the best meal of the day and I try to make it extravagant. Oftentimes it’s a big scramble of squash flowers, chile poblano, chipotle, huevos, red onion, tomatoes and avocado, complimented by red pepper bread from the German bakery. 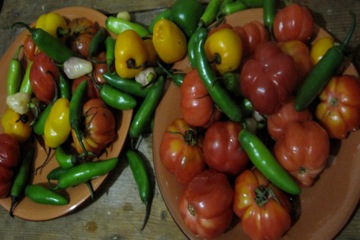 We eat and watch the hummingbird, Fred, who we dubbed Fred at a party a long time ago and somehow can’t un-dub Fred despite the fact that she now has three babies, feed her children. We peek out the windowsill very carefully after she takes off to watch the blind babies maw at the air. We look for Fred up in the bougainvillas.

Write, read, research, catch up on emails and blogs and Matador, swap ideas back and forth over my shoulder with Jorge, look out in procrastination at the blue amphitheater of sky which shows no trace of the morning’s softness, coolness, ambiguity.

Popsicle man comes. One coconut, one walnut, with real coconut and walnut chunks packed in. We chat for a bit about the heat and he always says, “que te vaya bien, guera,” a Mexican goodbye I love, meaning, “may you go well,” with the implication that you’re always going somewhere. 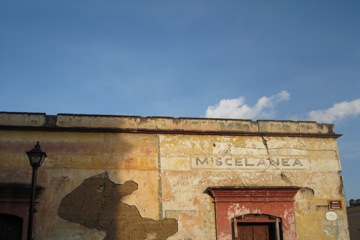 Take the dog out for a walk. The city is relaxing now, easing into evening, and I get a coffee and stroll up the andador. Tourists, usually big groups of pastel-and-visor-wearing Europeans, are taking photos of Santo Domingo, and sometimes their guide ventures forth to pet the Stella.

The Germans love Stella. They come up and speak to her in what I can only guess is German baby talk. I never really associated German Shepherds with Germany, always figured it was one of those things like French fries that had roots in a place but had long since lost them, but it seems Germans and the Stella have a thing for each other. 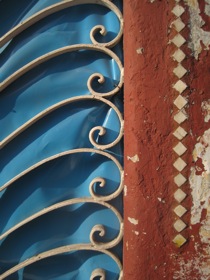 We keep up the andador and pass the pirate CD stands where Lila Downs or Vicente Fernandez is playing, or sometimes a bizarre Mexican Bob Dylan cover, and hippie viajeros sell their leather bracelets and beaded jewelry. They have drums and dreads.

We pass the fruit man selling mangos, oranges, cucumbers, jicamas in chile. He looks embarrassed every time I say hello even though I do it every day.

We do a tour around the Conzatti park and the Llano park where kids stop riding their bikes and stare at the dog in awe, and where one day, only one day in all of our walks, a little girl came running up and said,

“Yo soy Angela Gloria Martinez Gonazales y amo los perros” and proceeded to grab the dog’s head and hug her. Stella is a sweetheart and loves affection but parents used to seeing dogs foaming at the mouth and hurling themselves against fences don’t assume this, and I thought her father was going to faint on the spot. But Stella and Angela Gloria Martinez Gonazales bonded, and the dad stepped back for a bit, cautious and curious.

Go the Miscelanea for beers. Carry a big green woven bag like the señoras carry to the market full of envases, the empty bottles you have to bring back to the store to exchange. If you don’t bring the envases you’ve gotta pay 5 or 10 pesos more per bottle. This is a lot for a young writer scraping bits and pieces together to get by. 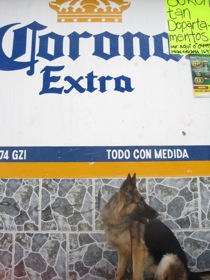 I hand over the envases and the man brings a couple of Bohemias out of the big freezer and puts them in the bag. Sometimes I cave and buy garlic peanuts and jalapeño kettle chips.

Jorge and I have beers. Talk. Plan. Dream up road trips around the Oaxacan Coast and houses we’d build deep in the Sierra. Start cooking a big mix of local veggies and heating tortillas, or:

Go for tlayudas. The place is an old house with a big square courtyard bordered by the rooms and the kitchen where the family lives.

Grandma shuffles in and out of the kitchen in a woven dress, socks, and an apron while the middle-aged couple who run the tlayuda business spread the big tortillas with bean paste, cheese, sliced onions, and lettuce, and stick our chorizo wrapped in aluminum foil underneath the charcoal.

The kids meander in and out of their rooms and the kitchen, sometimes coming over to put salsa or napkins on our table. The tlayudas come twenty or so minutes later, the giant grilled tortilla crispy, the chorizo sizzling hot, the beans and cheese and onions with a poignancy you just don’t find outside of Mexico.

Walk back home. The lights on the hillsides glimmer against an enveloping midnight blue and always remind me of the first overnight bus I took to get here when I had no idea where or how anything was. I can still feel that initial surge of mystery and adrenaline walking home, even when I walk the same streets everyday.

Firecrackers pop, the sound of horns from distant fiestas drifts over the house, and we fade off into sleep.

And you? I’m putting out a call for submissions for “A Day in the Life of an Expat in…” Where are you living? What’s a typical day there like for you? I’d like to explore the kinds of routines we develop living abroad; the ways in which the exotic becomes routine but also maintains a vividness, a foreignness, perhaps a trace of mystery.

Do not send thrilling tales of adventure on the high seas. Plunk us down into an average day in your life – sights, smells, sounds, experiences, popsicle men, bus drivers, neighbors, students. Send submissions, under 1000 words, to Sarah(at)Matadornetwork.com with “A Day in the Life of an Expat in ….” In the subject line.