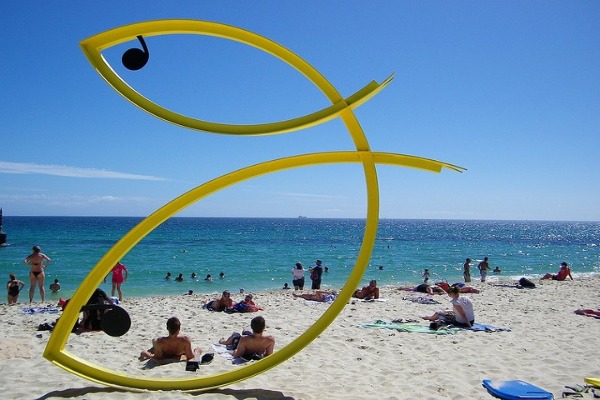 Helen Billiald describes how she works and relaxes in Perth, Australia.

Ever since the kookaburra came by, our alarm clock has been out of work. Something about the lemon tree, its branches inches from the bedroom window, makes it a kookaburra’s fantasy singing spot.

At half five in the morning, one of these birds takes a deep breath and begins to bellow through the flyscreen window. The day has begun.

Perth’s summer heat makes me grateful for this jagged dawn chorus. In the bathroom, the high square window already forecasts a perfect picture of blue.

I’m forced to skip over a chain of ants to reach the shower and I wonder if the gecko has spotted them. He’s glued damply to the tiles, all dark eyes and oyster-pearl body.

The radio is croaking news of bushfires just outside Perth, listing roads closed and evacuation routes. I hear Roleystone mentioned, the wooded scarp where a friend lives and concentrate on the voice. 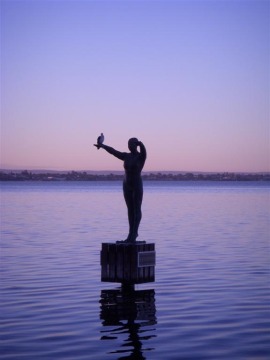 “There is a threat to lives and homes. You are in danger and need to act immediately to survive.”

I know Bob will be prepared but the words stick in a persistent swirl around my head. Today is the Victorian bushfire anniversary when 173 people died.

I sit for a while in the courtyard, wondering at the news and flicking a hose between pots of herbs. From the brick walls the first hesitating notes of cicadas start up. They’re experimenting with a few staccato notes, not sure enough of themselves to fall into that two-time beat that will become the day’s signature rhythm. Around me, the pavers are decorated with lemons.

As I stand to turn off the tap, discarded lemon buds stud my bare feet and I realise the tree is in flower again.

It’s Monday and my husband is gone by half six, cycling into the city. I head out on foot just before seven, taking the short walk into the University of Western Australia’s grounds. The campus is thick with irrigated greenery and bird call.

In February, this tropical note manages to be both calmly beautiful and distressingly wrong, like walking into a familiar room and finding the pictures rearranged.

A few cyclists and a couple on foot offer a greeting as we pass. There’s an old school politeness around here; people still call “thank you” when getting off the bus.

Perth’s early-rise culture means I’m not the first in the office. Bob’s desk stands empty. He’s already called to say he and his wife are safe, but like all the evacuated residents they’ve no word on whether there’s a home to go back to.

Today I choose script work and shut myself away for recording. I’m on draft 14 and while the video will only last five minutes these scripts take weeks of primping to get right. The BBC pommy voice that plays back takes me by surprise. Life lived around Aussie accents makes it easy to forget.

By twelve I dive out for lunch. The Swan River loops past the campus and I lie with a friend under a peppermint tree, catching up on the weekend’s gossip and watching white sails on the water. Between my hands, I can feel the grass stems beating their heads in the wind.

Jodie looks at the smoke haze, slicked in a grey smudge over the hills. Her home is further east on the same ridge.

“The wind was roaring up there yesterday” she says. “I had my bags packed from Saturday morning. We were told the fire was jumping 200 metres a go, you know, embers on the wind.” She lobs a grass stem into the river.

“You’ve heard what caused it?”

Often it’s arson, or power lines. I imagine a spark landing on these grass stems, sucked dry by three months of an Australian summer. Poor sod. However stupid to use that equipment, the guilt would drown you.

As we walk back we hear the high wail from a mob of black cockatoos, but when we try to find them they’re hidden in the trees.

By 3:30 I’m finished, and as I pack to leave a call comes through. An already quiet office falls silent. Bob has a home to return to.

The smell of cooked noodles and ripe fruit breaks my thoughts on the walk home. It’s the calling card of Broadway Shops.

Inside, an enthusiastic card game has attracted an audience outside the kebab shop; three elderly men frowning over their hands, and I squeeze past to pick up Turkish bread. It’s handed over wrapped in paper and warm to touch and I can’t resist tearing a chunk for the rest of the walk.

I mean to read for a while, but an hour later I wake to the clunk of my husband’s bike being wheeled through the front door. 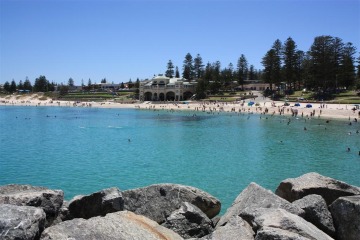 My favorite siesta wake-up is the ocean, and a ten minute drive puts us at Cottesloe beach. The radio is full of fire reports, no deaths or serious injuries, but seventy-two homes are gone.

There are plenty of quieter beaches than Cottesloe. This is Western Australia after all and you can have as much white sand as you please.

But we’re aware enough of rips to seek out these protected and patrolled corners. I half drowned my husband in our first Australian weeks by leading him into a set of unexpectedly big breaks. You only need that lesson once.

The first dive is the best, a shock of cold water and muffled dragging sand. However hot it gets, the water keeps a cool edge. We follow it with coffees and sit drip-drying under the pines, watching the sun dip straight into the Indian Ocean as streamers of rainbow lorikeets come in to roost.

Now at my desk in the dark I can smell figs simmering in the kitchen. When the breeze pushes its way through the flyscreen it’s mingled with eucalypt and peppermint.

Just then, like an echo, a single clunk reminds me that the lemons are ripe. Their dull flesh-thuds as they fall are becoming the backdrop to these warm summer nights. I flick on the computer and begin to write.

Tagged
Narrative Perth, Australia
What did you think of this story?
Meh
Good
Awesome