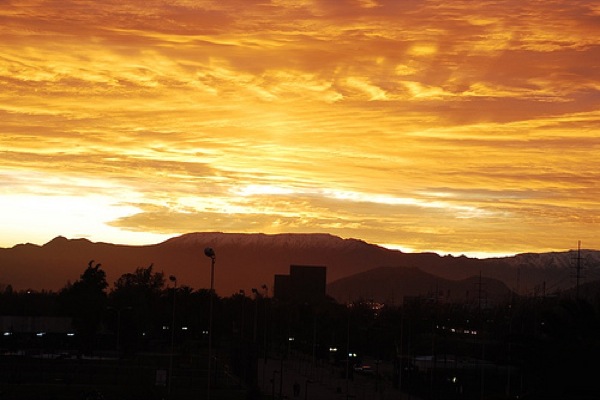 Bikes, protests, skateboarders and microbrews – a day in the life in Santiago.

The first sound I hear most mornings in the springtime is chirpity birds with their own version of the piropo, a pseou-pseou chirrrp.

Then comes the fffft fffft of someone sweeping the sidewalk six stories below, and the squeeeeeeal of my across-the-hall neighbor’s stovetop teakettle, an oddity in the land of electric ones that turn themselves off automatically.

Later, as my neighbors wake up, I hear the whrrrr of the elevator and the old school wooden gate that you must pull shut before moving down. A floor-mate or two commutes by bike and I hear the clickclickclick as they wheel their steeds down the hall.

Then the building is ours, the work-at-homes, stay-at-homes and one crotchety elderly shut-in, a foreigner like me who came to live in Chile when she was young and able-bodied. She’s angry now, which is either the cause of or result of her bad relationship with her grown children.

The day plods on. I scoop precious fine ground coffee into the espresso maker and wait for the sputter to let me know it’s done. I have maybe some yogurt and fruit or toast and cheese for breakfast, and my day gets underway. 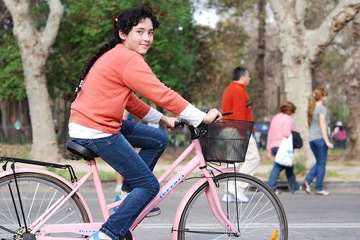 Depending on what I have scheduled for that day, I’ll get to work. I’m a writer, translator, teacher, editor, blogger, photographer and community outreach ninja for Matador. Some of that requires attention every day, some only sporadically. I’ll spend from eight to about noon working on sundry projects or drumming up more if I can see an empty space looming in my schedule.

If I hear a protest from my house or see reports of one on any of my local news sites or Twitter (which I bounce back and forth between in between sentences, phone calls, etc), I’ll usually stop what I’m doing and go get a better look, and maybe some snaps. At around 12:30 I’ll check to make sure I don’t have any outstanding invoices to send or follow-up on, and start to get ready for the gym.

I’ll click and slide and whirr downstairs, bike in hand, and head off to the gym, where I’ll either go indie or let a very tiny piston-legged man we affectionately refer to as “el pitufo” (smurf) urge me to ACCELERA! And with MAS CARGA! I’ll do some weights, cool down, shower and if I’m lucky, meet a friend for lunch around Paris Londres, a quirky little cobblestoned neighborhood that’s suddenly safe and hip, or maybe downtown to El Naturista on the pedestrian street Huerfanos for a fresh vegetarian lunch with carrot juice.

If not, it’s home for nibbles, which I will do while catching up on whatever happened since I was last here. Emails and back to writing, fanning the flames under more work, translating, occasionally hunting down an event to shoot (photo) in the afternoon, and hopefully making plans with a friend to meet up later. If it’s an especially free day, I’ll turn my attention to some writing projects I have that are long-term, and as yet, unpaid. 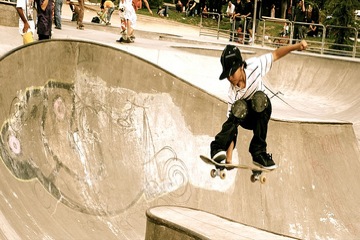 In the later afternoon, around 7, if work permits, I might head out and take pictures of the skateboarders at Parque de Los Reyes. The kids know me, and call me tía, (auntie), a testament to my age, not our family affiliation. We exchange kisses on the cheek and they show me their latest skate-acquisition, hats and t-shirts, shoes and boards. I duck past the cuchuflí vendor and do not buy any of his cream-caramel-filled wafers, focusing on flailing arms, big air and stern looks of concentration on the (mostly) boys’ faces.

By sunset I head out of there, and either head up to Bellas Artes or Providencia to meet up with friends, or maybe cajole someone to coming down to Barrio Brasil, where I live to check out the newly-opened Le Garage, a gothic-interiored building with leaded glass windows and way more space than tables. We’ll nibble and yammer, maybe take a walk around town, and if there’s an outdoor concert or performance on, as there often is during summer months, check that out. Or we might go to Per Piacere, a pizza place with a good selection of artesenal Chilean beers, including my new favorite, Los Volcanes Rojo, which is flavored with cinnamon.

I’ll get home usually between 11 and 2, and at that point make sure there are no fires to put out re: work, make a list of what needs to be done tomorrow (admitting that sometimes items drift across the week without ever getting done), read some nonfiction (usually), and drift off to sueñolandia (dreamland), awaiting tomorrow’s pseou-pseou chirrrp.

What did you think of this article?
Meh
Good
Awesome
Bookmark
Posted In
Expat Life
Destinations
Santiago, Chile

Photo essay: Anatomy of a protest in Santiago

How to: Prepare for a protest

Throwing rocks at dogs in Chile

Gay man’s death to lead to anti-discrimination laws in Chile?

Stretch your income with an international move

What’s different about me now: An American in Chile

The best cities in South America to travel by bike