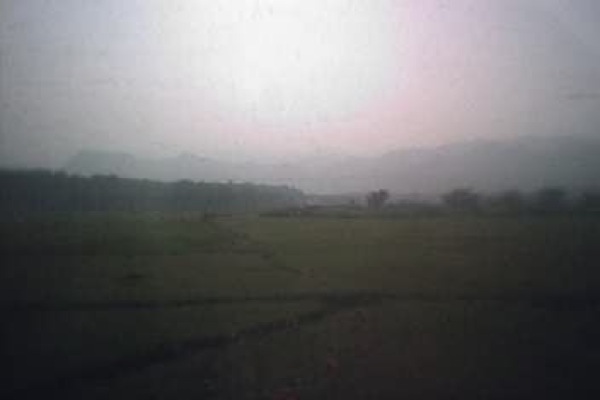 Go for a ride on a Chinese train.

At 4:45 a.m. you wake to the gently rocking train and the early, absurdly early, Chinese morning light. It gets light around 4:30 now, probably because China rejects the idea of time zones in favor of national solidarity.

Waking up at quarter to five — usually the thickest slog of night with darkness and dreams at their heaviest — and seeing pale green light rising is yet another of those in-between-worlds sensations so frequent in life in China.

Waking up, you are not quite sure where and if you are. Awakening in the train is an unsettling experience. It’s odd to both fall asleep and get up in noticeable motion, like being in another, floating dimension.

Then the light and the snoring senior tour group below quickly ground you in reality, and it’s time to hit the bathroom before fifteen people try to pack it in and brush their teeth and spit over one another and pass each other in the hall and refill their tea thermoses, ah, the humanity!

Soon the masses will be filling the narrow corridors with all their odors and routines and steaming cups of hot tea and jabbing toothbrushes but now, at first light, it’s still calm, there are still feet sticking out from under the covers and snores and the steady, calm sound of the lulling train. 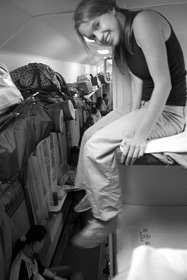 You sit up and promptly catch yourself before you smack your head on the train’s ceiling. You have smartly chosen the top bunk in the hard sleeper class. Hard sleeper isn’t so much hard as cramped; each car contains 10 small door-less rooms which hold six beds.

These are actually quite comfy and come with big, fluffy white sheets which you want to believe are freshly laundered. The three beds that comprise one bunk have different prices; the lowest one is fifteen yuan more expensive than the highest one. This supposedly buys you space and ease except for the reality those in the hard seat classes, random passerby, stubborn grandmothers or people in top bunks usually end up using your bunk as a comfy window seat.

The middle bunk is alright but still puts you full on in the fro of the noodle-sellers and the curious onlookers and the random arm or foot and is much too central for your taste. So the top is the way to go, except for the fact that you have about a foot less head space than the other two bunks so you are constantly curling your neck into absurd S-shapes. 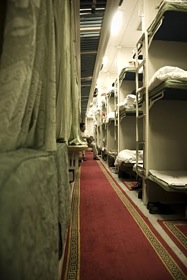 But once you lie down you are in (relatively) peaceful serenity in your own individual universe. You can lie there and contemplate your culturally-determined top-bunk individualism. It’s not the closed door, roomy, soft sleeper compartment with four beds and fake felt roses on the little tables, but it’s not the hard seat with seeds being spit at your feet and migrant workers sleeping in your lap, either.

So you curl your head like a gummy worm to squeeze out of the bed and ease down the little ladder without stepping on anyone’s feet or head. You step into the narrow corridor, rock a little, straighten yourself out, and take in the wheat fields which are passing silently in the morning light.

The morning is hazy white and faintly dizzying, and under it the landscape seems uniform and endless. You make your way to the bathroom, where you pride yourself on your incredible stability faced with a squat toilet and a moving train. Then you splash your face with water, brush your teeth and head back to the two little fold-out seats in front of the window to watch the morning grow and the landscapes slide by.

Slowly the train wakes up around you. People stumble with crazy hair to the bathroom. Old men strut and flex and roam in their tight white long underwear. The senior tour group is up and busting out their bags upon bags of bizarre Chinese snack food. You count four bags alone with the two old ladies in the bottom bunks of your room. They’re wearing the unmistakable red caps of Chinese tour groups. Their male friends, donning the same caps, come over and crowd into the bunks for a little Chinese breakfast party.

You watch as the fiesta unfolds. They break out metal bowls and the women serve up millet congee. Then there are boiled eggs for everyone (some duck and some chicken) meticulously peeled and devoured. Then the freak parade of meats—tubed white sausages, chicken feet, and gooey unrecognizable who-knows-what. Then, refreshingly, apricots and cherries, which leave a big mound of pits on the small table. And finally little white bread biscuits out of an enormous bag that says, “Fine French Bred!” and finally, everyone slumps back in their seat to wait out the final hour to Qingdao. 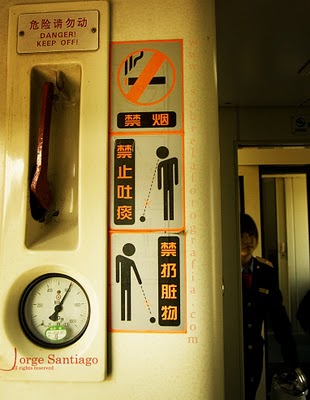 Whew. You, meanwhile, break out your French press to awe and astound your neighbors with coffee, that scandalous, criminal beverage. You put two scoops of grinds in the French press and fill it with hot water (available in all Chinese trains) as the senior tour group gathers round with looks ranging from outrage to amazement.

They whisper to each other and you hear the occasional “laowai” (foreigner). What’s the foreigner doing?! “Ruining her stomach, for sure!” you’re sure one woman is saying as she clucks her head back and forth. The group of red-capped elderly tourists watches for the full four minutes of brewing time until you push the French press down and serve your coffee, and they wait until you drink it—will she do it, will she do it?!?—before they lose interest.

From there on out, it’s a smooth caffeinated ride through the flat, silent landscape. Gigantic nuclear plants rise out of the haze and fade again into the disappearing wheat fields. You see huge stretches of vegetable fields where the tiny, distant silhouettes of farmers can be seen crouched and lost in work. From time to time a road appears between the ceaseless flat fields and on it is a girl on a bicycle.

Eventually grimy buildings covered in pipes and wires and ancient-looking metal machinery conquer the landscape and you know you’re getting closer. You pass a few rivers and ponds which are a green oily color straight out of animated TV shows. Patches of blue sky show and fade in the gray haze, and then you see the telltale lingering cloud ahead which indicates smog and encroaching civilization.

The train makes a final pass through a landscape that is now dominated by rusted parts and chugging factories of who knows what, and the occasional river bordered in brightly colored garbage, mostly plastic bags. The last kilometer of the train ride is the most brutal. Dozens of orange-shirted migrants, most of whom look older than fifty, are bent over hammering away on the tracks. Even the toughest-looking construction workers have clear plastic thermoses of tea.

The city begins to emerge out of piles of dust and bricks, and finally parallel tracks appear to either side and train cars block the scenery and the train grinds to a final halt. Everyone simultaneously makes a grab for luggage in a free-for-all chaos where it seems as if bags are falling from the sky and limbs are flailing everywhere, and then people book it for the doors. You heave your pack onto your back and step out into the streams of passing people, into the Chinese morning, into Qingdao.