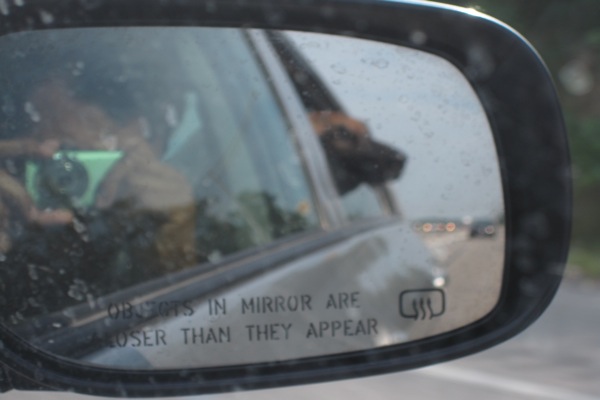 Unexpected meetings with ex-boyfriends become ways to measure oneself against the passing of time and against former selves, the ones we embodied when we were with _____ . They become ways of seeing how much the person we remember through the eyes of the ex-boyfriend has become someone else, has reconfigured her previous conglomeration of personhood into a new one.

The United States of America, I realized, is like an ex-boyfriend.

One you bump into suddenly and abruptly in a strange city. Maybe you thought the encounter could happen, maybe it crossed your mind, but the way it will actually smell and feel and propel you into spinning self-reflection has not occurred to you at all.

Then all of a sudden you’re there and saying, “Oh God. Did I used to think that awful corporate tone was normal? Did I used to use it when I worked at coffee shops? You have a lovely day now, enjoy your hazelnut skim latte. Did I used to wear jean shorts? Oh, God, remember when I sprayed that hideous ginger perfume from Bath and Body Works all over the bathroom every morning in high school and reeked of it, like I’d swum in a vial of artificial cloying sweetness? Oh my oh my.”

The U.S has been the most disturbing kind of ex-boyfriend encounter, the one that hovers in your mind and on your skin for days like the stickiness of a haunting dream, as much state of being as memory. All the things you used to take for granted, all the ways you used to see. The smells of hotels, the perfumes like chemical pollens clogging up your throat in clouds, the sound of lawnmowers, the giant cars that it suddenly occurs to you don’t belong to drug lords, the “howyadoin’” Ohio twang, the confident brassy swagger of undergrads with ponytails and gym shoes, the exactitude of everything – prescriptions, beers on the shelves, prices – the rules (my 5-year-old niece asked today “what did you like about Mexico?” and I said, “There aren’t so many rules like there are here. There are so many rules in the U.S.” She understood that one instantly. “Like you can’t climb up the food counters at Giant Eagle?” “Exactly,” I said). The infantilization of customers, the consistent feeling of being a four-year-old in shops and restaurants, the service industry devoted to coddling the tantrums and needs of consumerbabies.

The sheer possibility of it all. This literary magazine and that one, this brand of chips and that one, this country road or that one, this brand of shoes or that one, this Thai restaurant or that one, this book or that one; the sensation of stumbling out onto a plain of choices and recoiling a bit in shock at the openness of it, at the thousand cracked veins tracing the open landscape, which you could follow to more veins and more veins one choice replacing another and another and another and going onwards until you get dizzy and have to stop, gather your bearings, hold yourself against the grind of forward-moving choice-making beings for a moment. America, the land of possibility, of distracting, multiplying, endlessly divergent opportunities, and which are false is not for you to know until you’ve sniffed them out and left your trail of cash. The land of trends, fads, novelty, explosive newness (part of the perpetual illusion of kidness) inventing and reinventing desire with a new opportunity (gadget? distraction?) each month.

And also, the United States of America the Beautiful. Of “amber waves of grain” and “purple mountain’s majesty” and fields of Queen Anne’s lace in Ohio, of wilderness with the sagacious greens of pines and sublime whites of mountain tops and heady, high moraines of wet yellow grasses and grazing elk, of Midwestern hills covered in the flush of autumn reds, greens, oranges, yellows, flaring and fading before winter. Of seasons, forests, and lakes, of hikes, trails, and cheddar cheese sandwiches in cool groves of dancing light and falling maple leaves.

America the ex-boyfriend, like all ex-boyfriends will do, made me a little uncomfortable at first.

Oh, I remember your smells, remember when I slept with you and loved you without really understanding why or what drove me to it. Oh, I see the me of that time, see my fashion, see my tastes, see my passions, see my surety, and oh, I cringe. What you mean to me now and what you meant to me then begin to collide – the hopeful florid world of undergrads and intellectual precociousness (who was that “me” who used to think it hot to debate Green Imperialism at 3 a.m.? And how, please, how has she morphed?), the egg whites for breakfast, the familiarity with stale placeless places (the chain coffee shops, the chain restaurants, the soul-deadened bagel joints full of cheery corporate ad campaigns) and also the spontaneous interaction and connection with jumpy and alive Kerouacian American spirits, the exhilarating vertigo of their freeness, the sense of wild openness and possibilities and earnest, wacky, cynical, hopeful humor, all of the then and now begins to mix a little and it scares me.

I start to fall in love with you again – no, not woozy in-bed-all-day love, but the sort of reluctant and magnetic love born of intense familiarity and a strange sort of affection for/gratefulness to you for knowing me so well, for the fact that I (at one time) knew you so well.

And yet, I’ve moved on. I left you for a string of relationships with the outside world over the past six years, and the last time I saw you, United States – saw you as a boyfriend, that is, and not just flirted with the idea of meeting in brief visits – I was 22, and it was 2004. A lot has happened since then.

As Meg and I were saying driving the winding roads around Seneca Lake yesterday, a meeting with an ex-boyfriend is an opportunity to measure oneself against passing time and the former selves it contains. That encounter with you has made me realize that I want to keep you at arm’s length, United States of America – develop a healthy, even intimate relationship with you, but remain faithful to my dashing, complex, endlessly fascinating foreign lover: the world.