LAND OF THE THUNDER DRAGON. An epithet steeped in mythology, ancient traditions and mystery. Home to the majestic Himalayas, verdant valleys and serene Buddhist temples, the Kingdom of Bhutan has for generations remained isolated from external cultural influences. It is fiercely proud of its history and culture, ruling its people by a code of behavior and dress with seventeenth century roots.

Typifying its independent nature, Bhutan has pioneered the concept of Gross National Happiness (GNH) as a computation of national prosperity. GNH is governed by a strict set of nine domains that form the basis of its measurement: cultural resilience and promotion, living standards, education, health, environment, community vitality, time-use, psychological well-being and good governance. This allows the country to focus on the spiritual, social and physical health of its people and natural environment – rather than material growth and GDP.

Landing in one of the world’s most inaccessible airports, which is quite an experience, I wondered whether the Bhutanese are truly happy in their relative isolation. And whether they could teach me what happiness actually means. Two weeks and a lifetime later, I realized that they were onto something.

The thunder dragon will call me back soon. 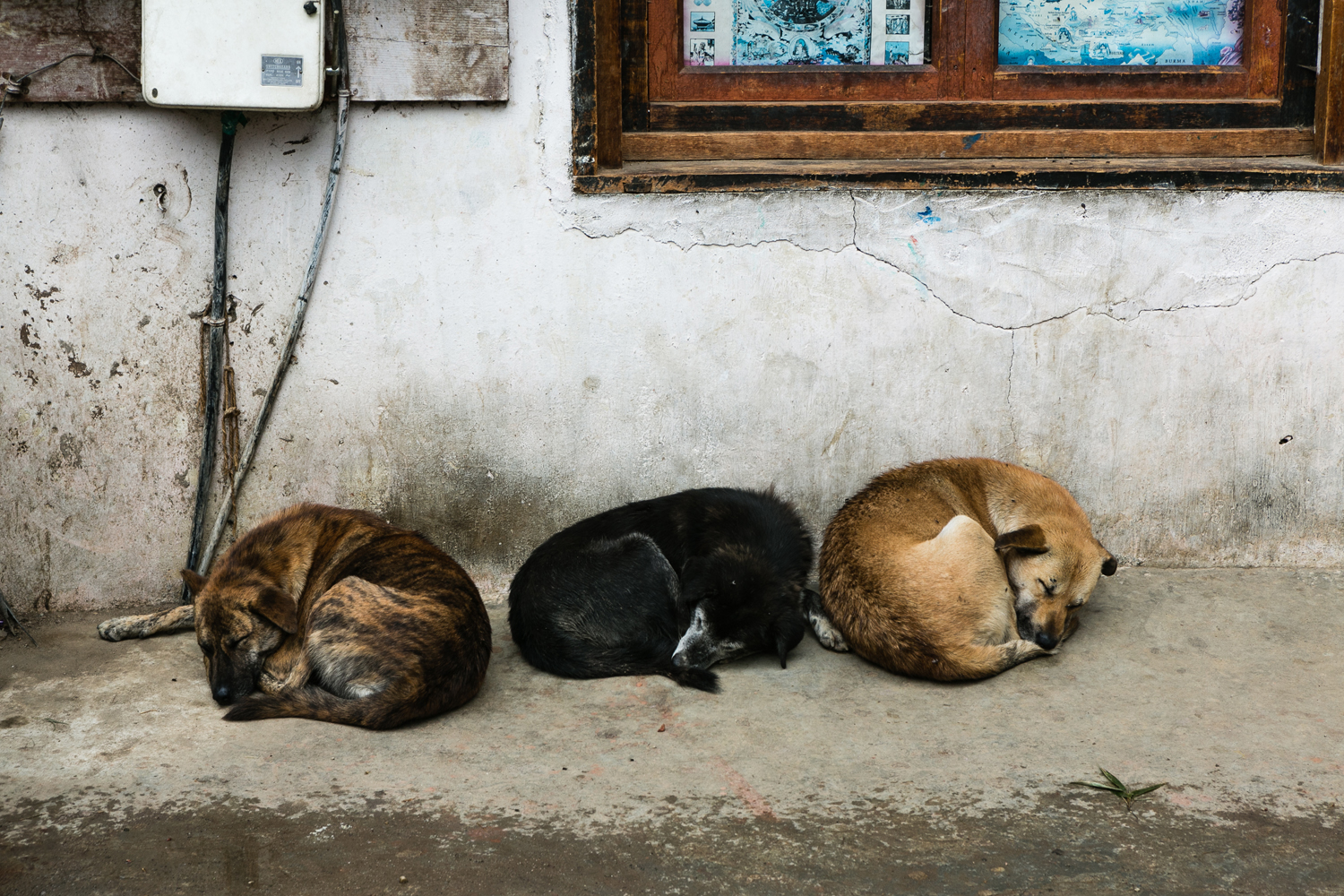 Buddhism teaches love for all living things, human and non-human. This lesson is most apparent in the city of Thimphu, where stray dogs wander the streets. Independent and organized into distinct packs, they live more or less at peace with their human neighbors. A period of rapid canine population growth, linked to a black market in meat and leftover scraps, threatened to shatter this accord. There were reports of dog attacks on humans, and complaints about noisy nocturnal altercations. In 2009 Humane Society International began a neutering/spaying and vet training program. When I visited Thimphu I noticed more street dogs than in a European city. Yet rather than being a nuisance, they illustrated the Buddhist doctrine of harmonious coexistence. 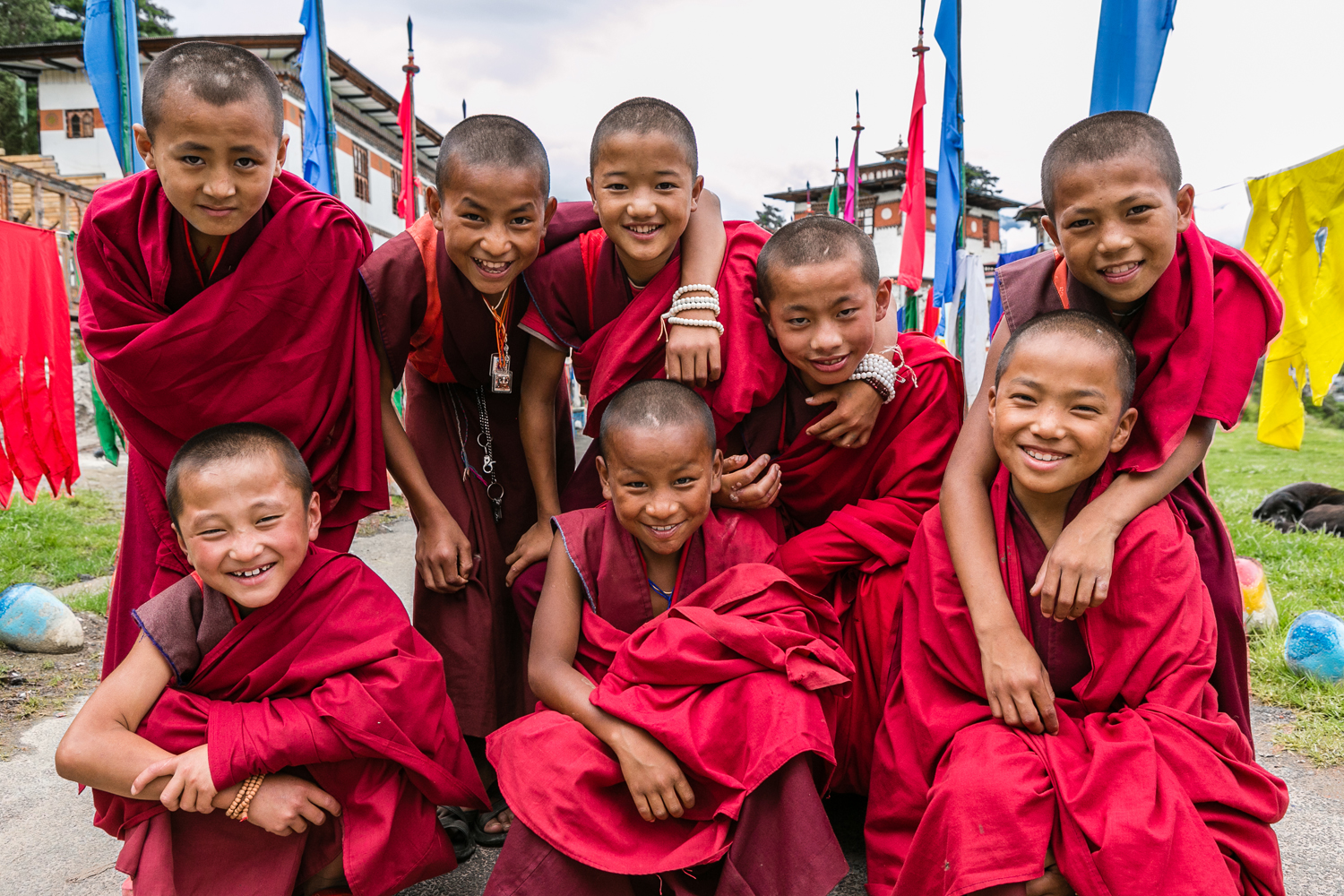 Occupying the site of Thimphu’s original twelfth century dzong (fortress), Dechen Phodrang (literal translation ‘Palace of Great Bliss’) monastery commands a breathtaking view from the top of a steep hill. Monasteries have traditionally provided education and a home for poor children and orphans. This practice is still prevalent today, with many families sending their children away when they cannot afford to feed or school them. Dechen Phodrang has housed the state monastic school since 1971. More than 450 boys are provided with an eight-year education, one of GNH’s most important domains. 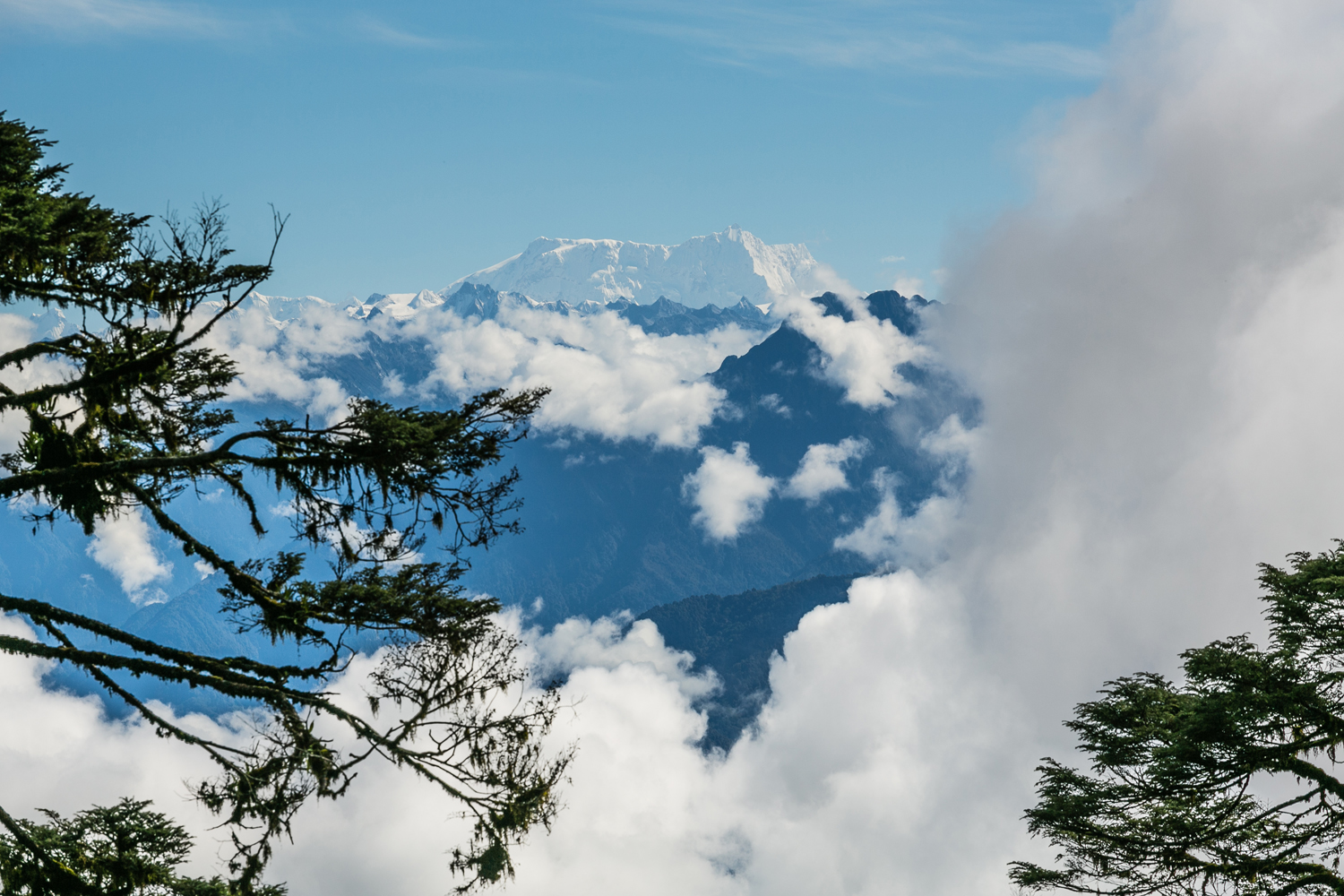 View of the Himalayas from Dochula pass

Situated 19 mi (30 km) from Thimphu on the way to Punakha, Dochula pass offers spectacular 360-degree views of the Himalayan mountain range on a clear day. It is most famous for 108 memorial chortens (stupas) commissioned by the Queen Mother to honor the victims of the 2003 clashes with rebels in India. The pass is often covered in cloud, yet I was extremely lucky to capture a shot of Gangkar Puensum, Bhutan’s highest peak. Isolated against the crystal blue sky, its stark beauty reminded me of how dangerous and exhilarating these mountains can be. 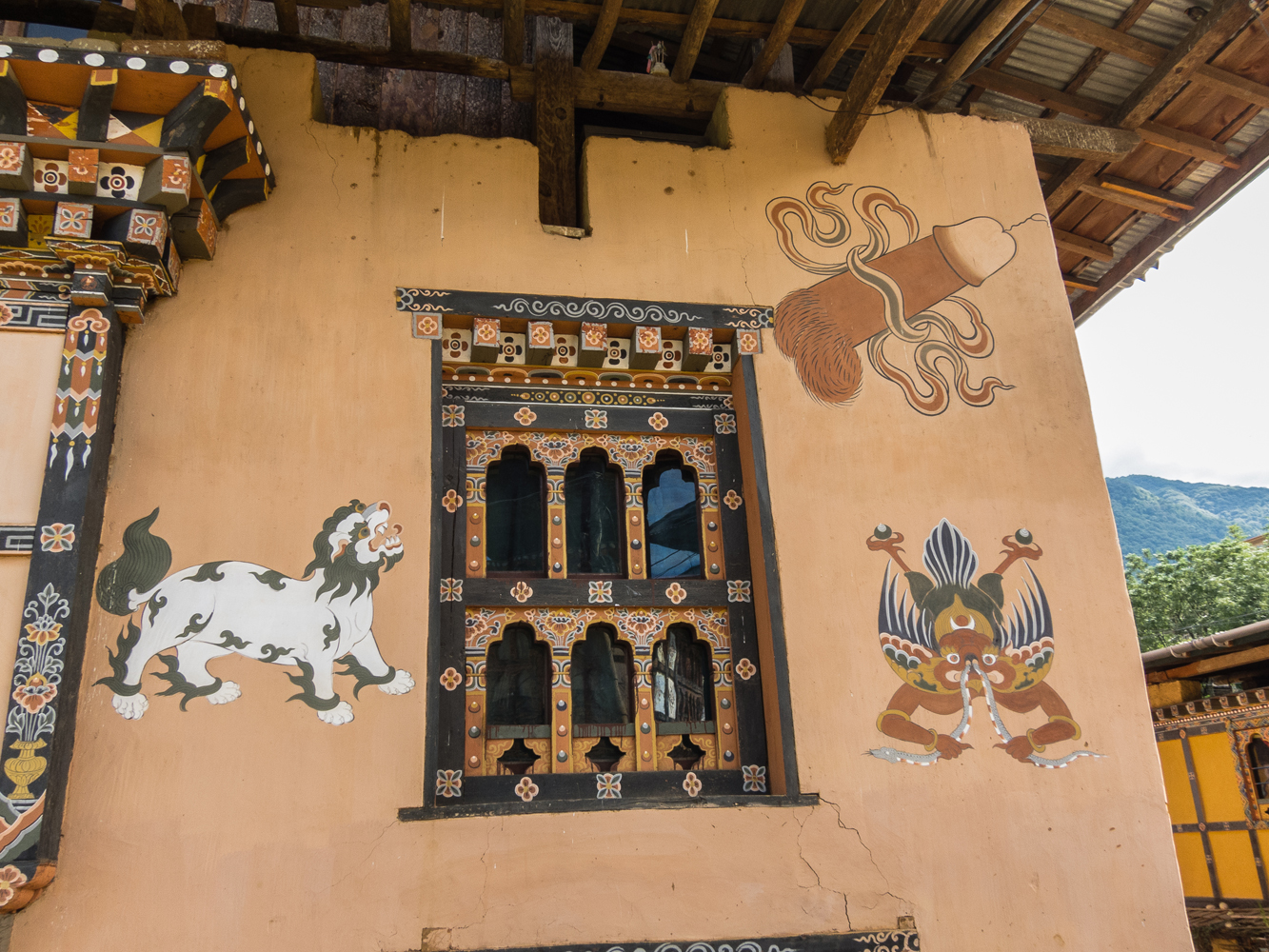 A colorful house in Punakha Valley

A fifteenth century maverick saint and beautiful Himalayan valley are unlikely partners in a conversation about phalluses. Yet without Lama Drupka Kunley and Chimi Lhakhang monastery, Bhutan would have been deprived of one if its unique cultural customs. Legends abound about Drupka Kunley’s Bacchanalian exploits; he is even reported to have turned demons into protective deities by hitting them with his penis. Yet these legends, combined with links to the ancient animist Bon religion, led to the worship of the phallus. Said to protect from evil, aid in fertility and dispel malicious gossip, phallic symbols are most notably painted on houses and hung from car mirrors. Quite simply, they make people happy. These images are an integral part of Bhutanese culture which locals and visitors delight in. 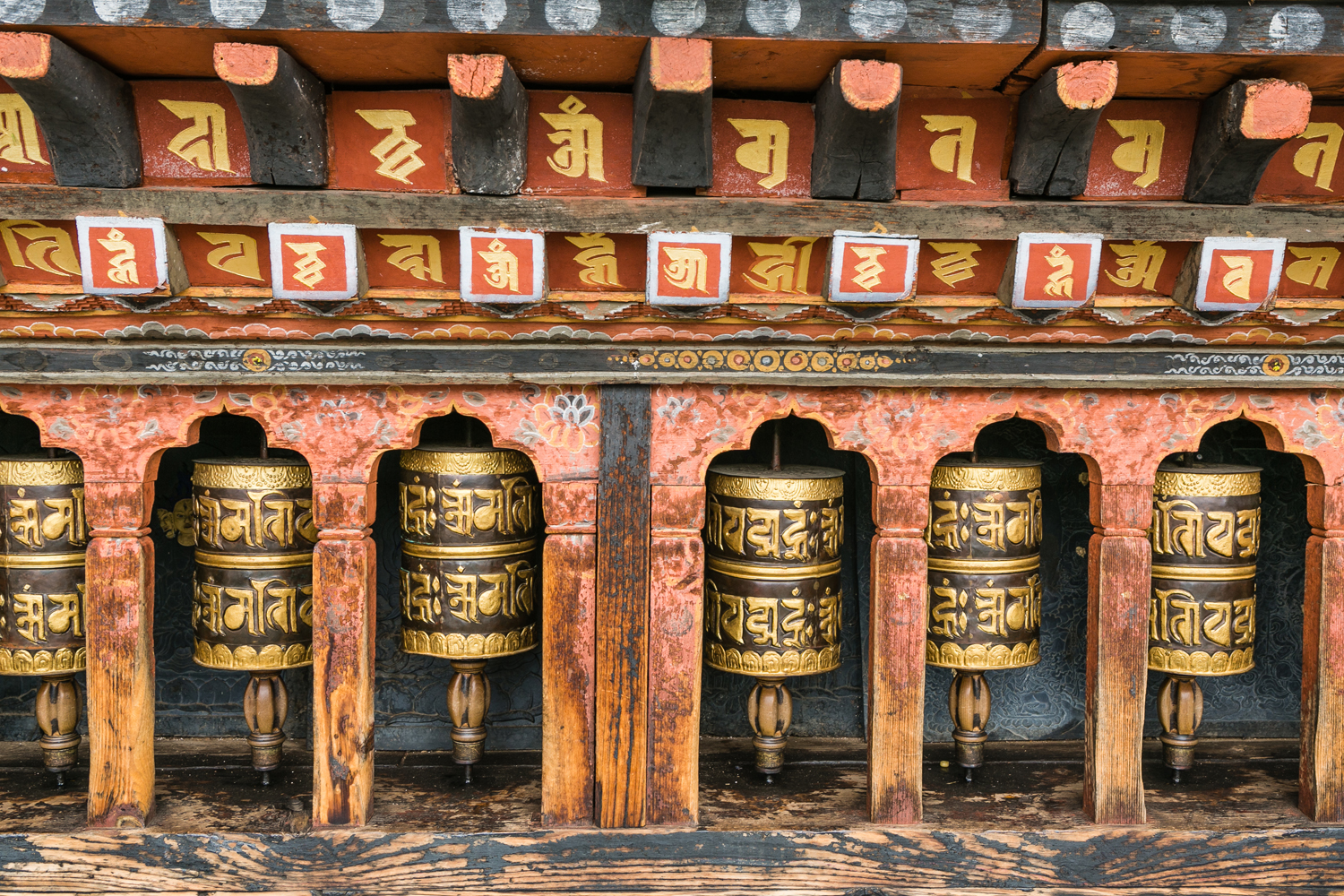 A row of prayer wheels in Thimphu

To spin or not to spin. That is indeed the question when visiting Bhutan as a non-Buddhist. Colorful prayer wheels are everywhere, appearing in all imaginable sizes from small hand-held versions to enormous, constantly turning water-propelled drums. Inside the cylinder sits a scroll embossed with a mantra. Spinning the wheel is equivalent to reading the mantra, which makes this practice particularly suitable for illiterate members of the community. The prayer wheel’s external shell is adorned with auspicious symbols and often features the words ‘Om mani padmi hum’ in Sanskrit or Tibetan script. These call forth the blessing of Chenrezig, the embodiment of compassion. And compassion is certainly one of the most prevalent values within Bhutanese society. 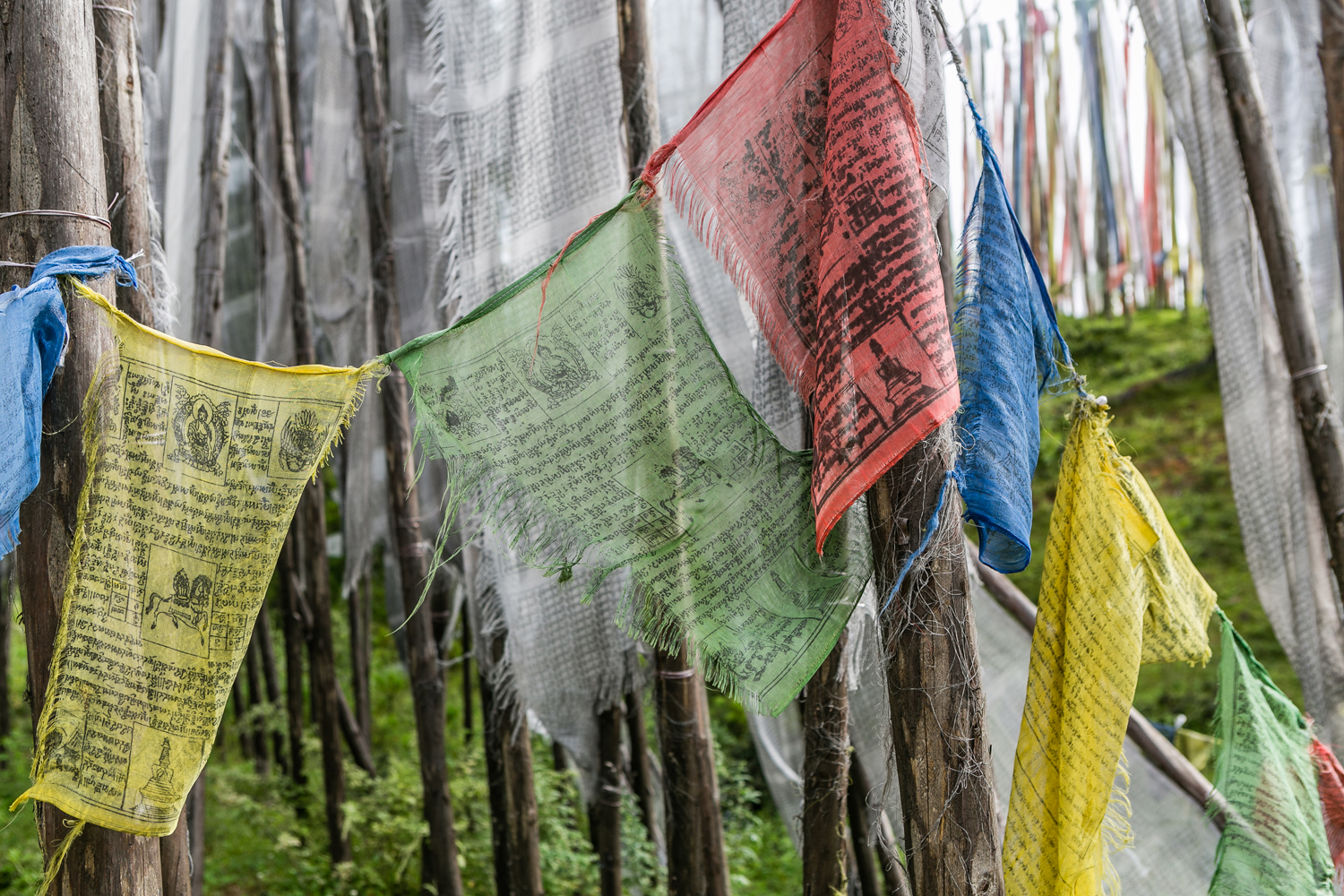 Earth. Water. Fire. Air. Space. These five elements are the cornerstones of natural existence. Their external balance ensures harmony within the environment. Their internal balance ensures harmony within the body and mind. The colors yellow, green, red, white and blue, respectively, embody the elements within Buddhism. Flags, and large banners in Bhutan, are printed with prayers, esoteric symbols and mantras. The wind carries these messages to the deities, generating natural positive energy as it blows through the pennants. Positioned near homes and spiritual places, prayer flags are an intrinsic and highly visible part of Bhutanese religion and culture. 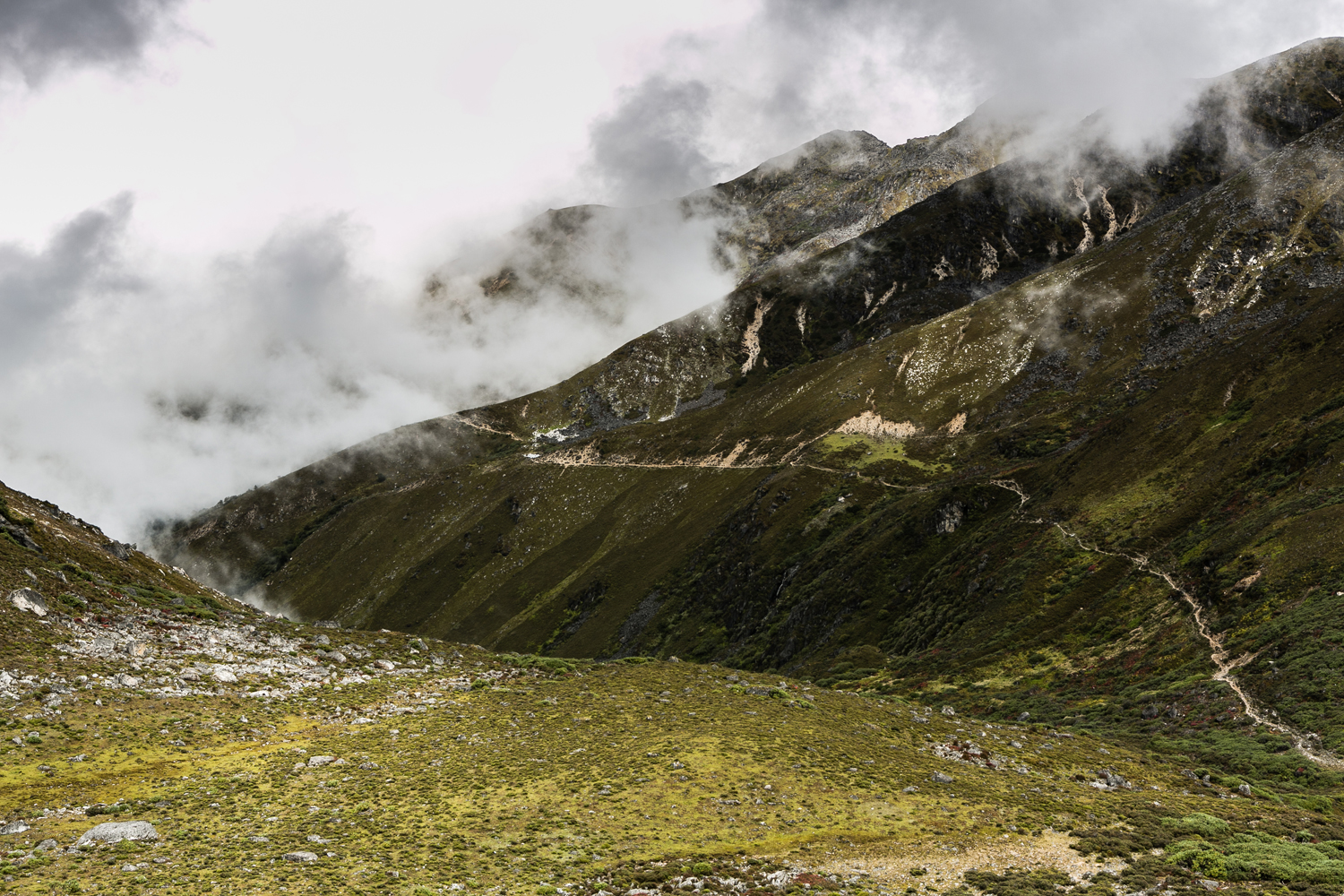 Yet again we are overtaken by the pack horses. For the past three days they have caught up with us after only a few hours of walking. Four legs are not always better than two, but in the mountains of Bhutan they are an asset! Psychological well-being is one of Bhutan’s GNH indices, and trekking through high altitude scenery certainly calms even the most jangled nerves. This trek was particularly special as it is the first time that I reached an altitude of 17,000 ft (5,200 m). The Bhutanese believe that their mountains are sacred and the homes of deities. In total silence, as low clouds enshroud peaks and valleys in misty cloaks, thoughts of benign spirits spreading compassion and harmony come easily. 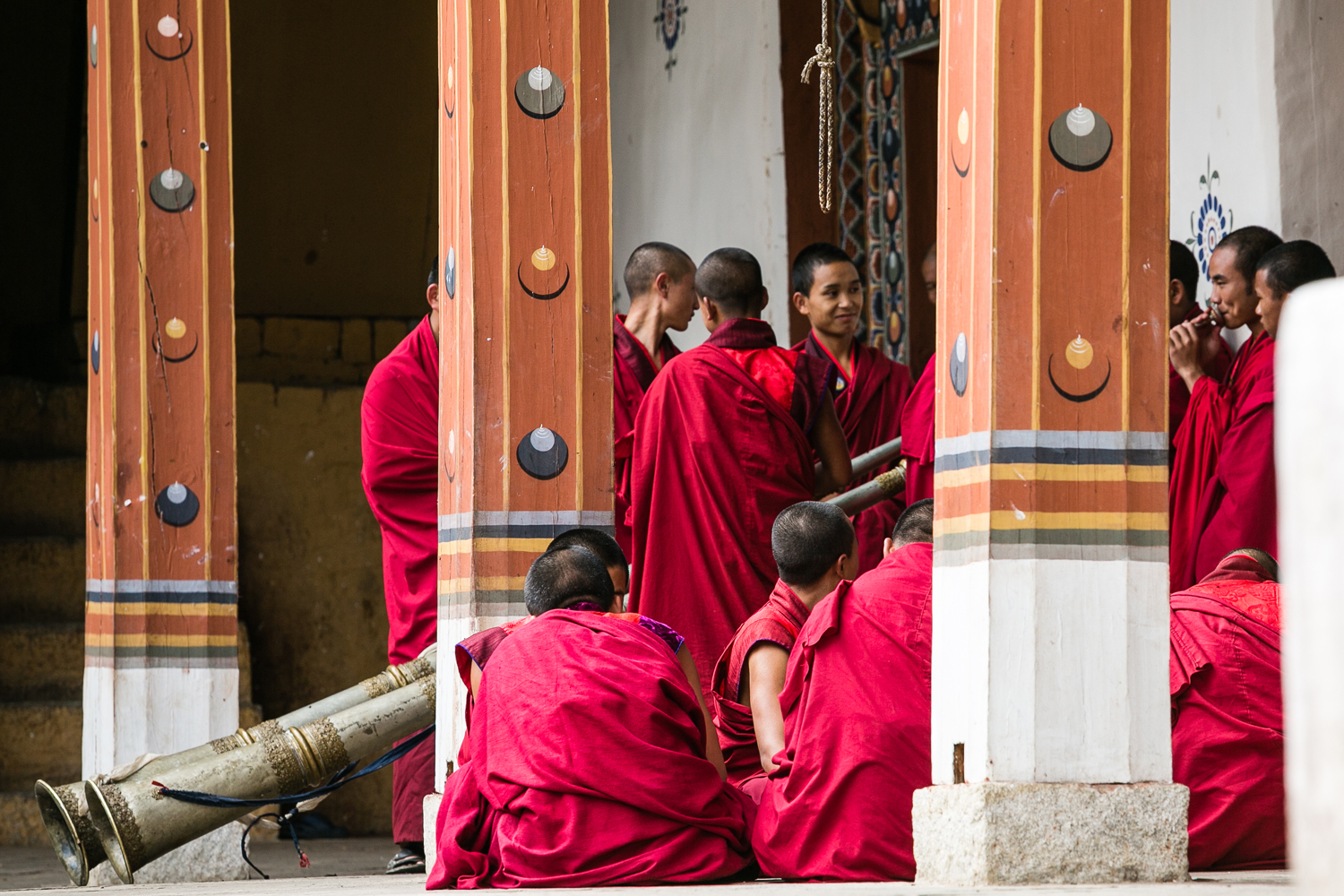 One of the most important pillars of Bhutan’s GNH is the preservation and promotion of culture. A key element of this is traditional music played on traditional instruments. While Bhutanese music is an acquired taste, the fact that this intangible cultural heritage is included in an official national identity is remarkable. The dungchen, or Tibetan horn, has been likened to elephants singing. I can verify that this is an accurate description, and have developed a new respect for anyone skilled enough to play it! 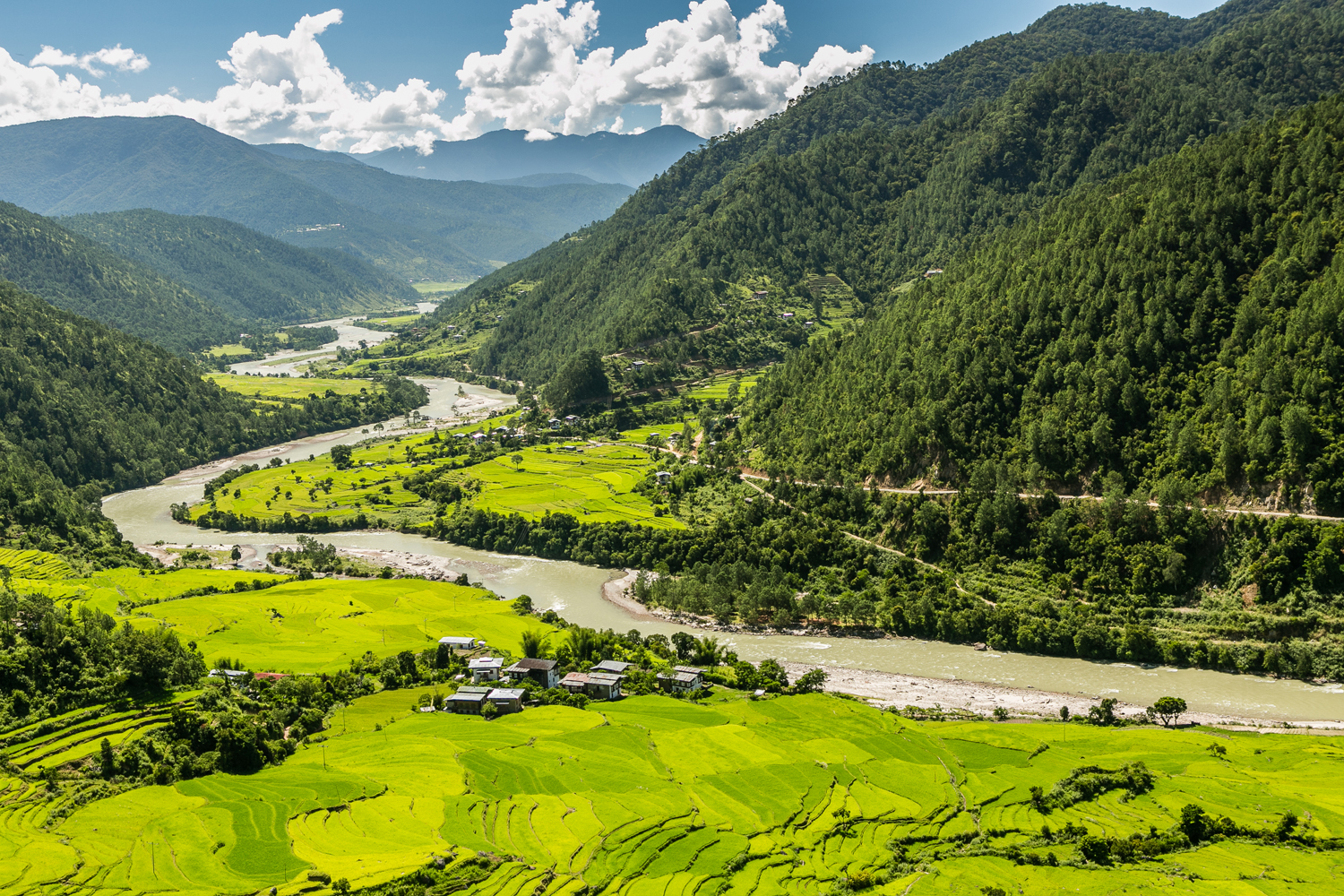 When looking at a scene such as this I understand why Bhutanese people are inherently happy. The landscape is spectacular, a perfect balance of spiritual, inaccessible mountain and fertile, life-giving valley. Rice terraces cascade down the hills, helping the country to return to self-sufficiency in this staple food. Mighty rivers, providing vital hydration, weave their way along ancient rock-strewn beds. A person cannot help but be elated when confronted with such natural beauty. 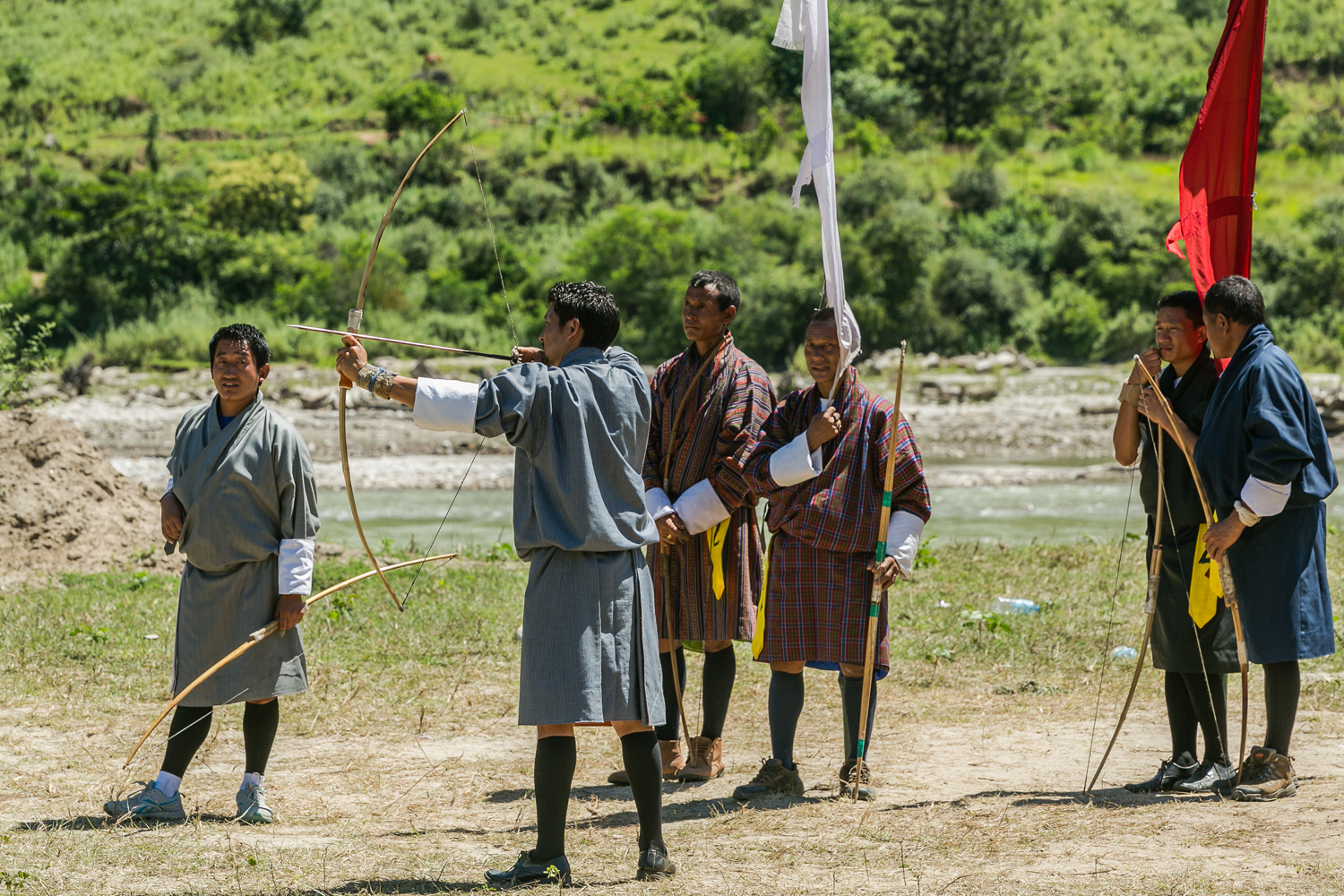 Archery is Bhutan’s national sport, practiced by all ages

Whoosh. Yet another arrow completely misses its mark and disappears into the sunset. Archery may look simple, yet for a novice like me it is far from straightforward. It requires physical and mental strength and skill. Archery, Bhutan’s national sport, is another element of GNH. Every village has an archery field and holds regular tournaments, ensuring the longevity of this ancient tradition. Although historically male-dominated, the sport is gaining a female following. During the opening ceremonies of the 2016 Rio Olympics, Bhutan’s athletes were led by flag-bearer Karma, a 26-year old archer. She may not have millions of dollars of funding behind her, yet archery has been in her blood for centuries and she is a role model for future generations. 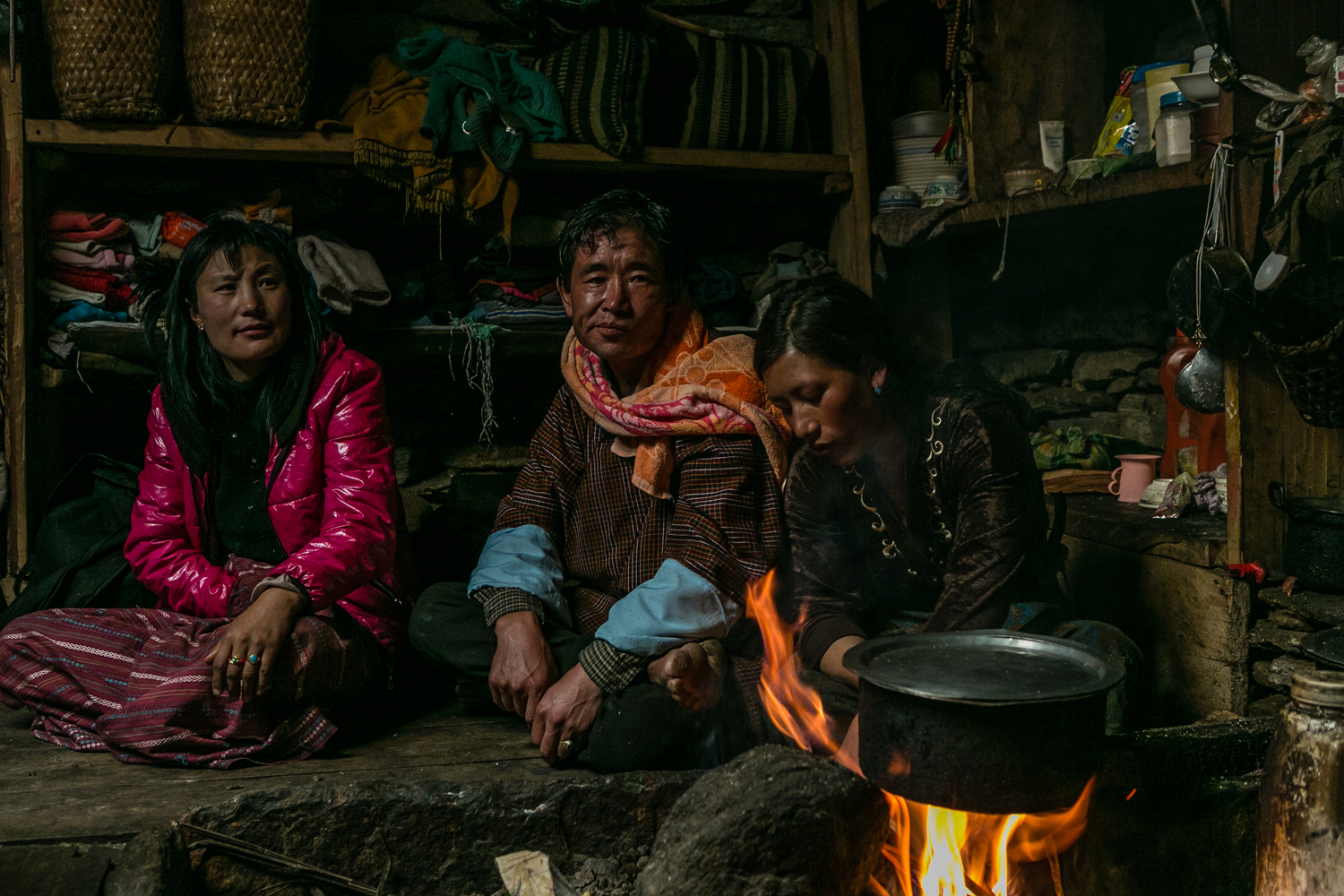 The air is smoky as we enter the cottage, and we barely make out the shapes of people sitting by the fire. We kneel by the warmth, for it is a chilly, rainy day, and are immediately offered a cup of warming butter tea. The butter is from a yak, for we are guests of a yak herder and his family. The yak is one of the most important animals in the Himalayas, providing food, transport, fuel and fertilizer. Bhutanese yak herders are semi-nomads, moving their animals to high mountain pastures during summer months. Geographical remoteness and social isolation are a challenge. Yet they are happy with their cultural identity and proud of their lifestyle. And the tea didn’t taste too bad either. 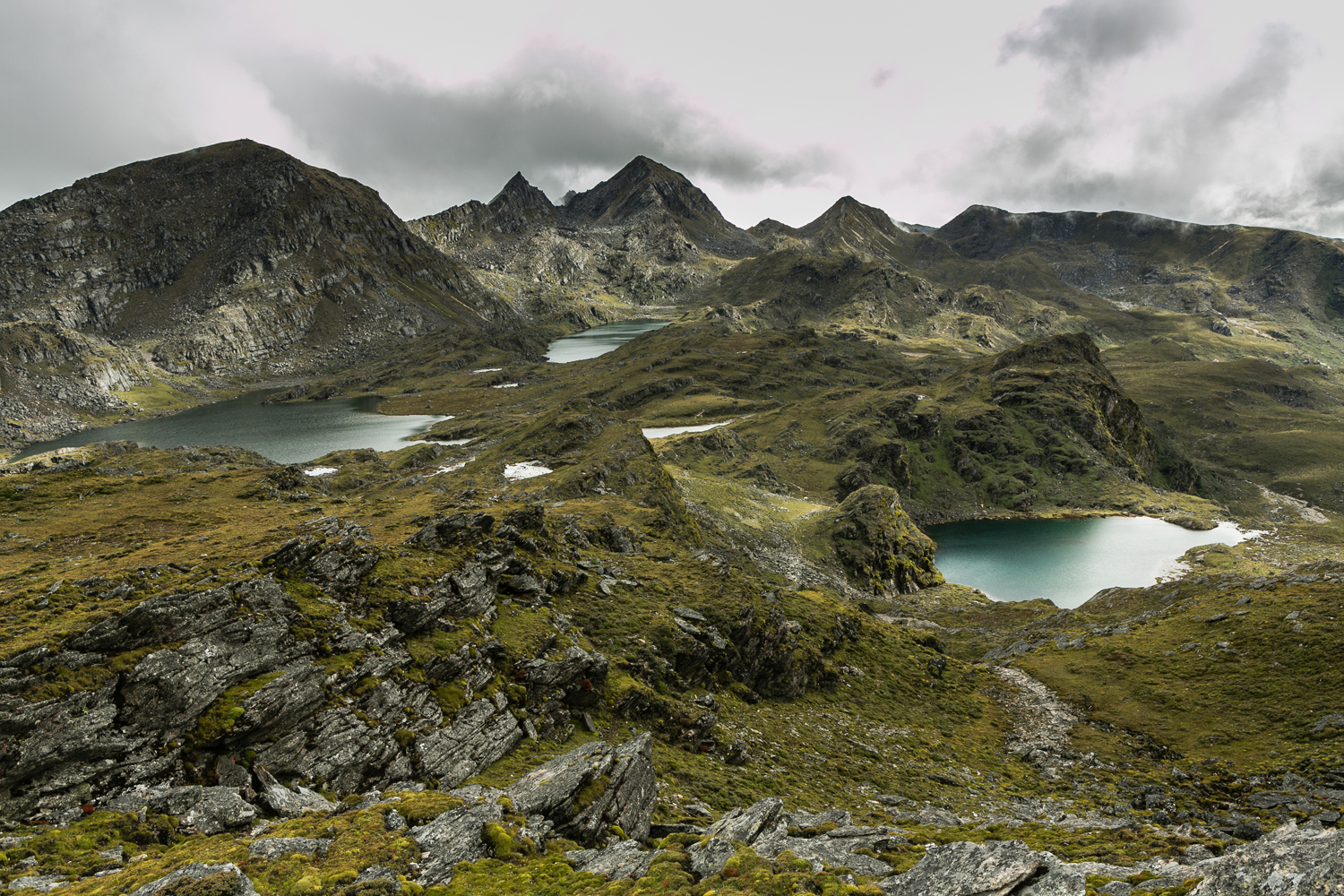 Official statistics report more than 2,000 high altitude lakes in this Himalayan mountain kingdom. I was quite unprepared for their remoteness and beauty. Filled with golden trout, many are a source of sustenance for nomadic yak herders and wild animals. Their contribution to GNH cannot be measured easily, yet trekking among these treasures filled me with much joy. 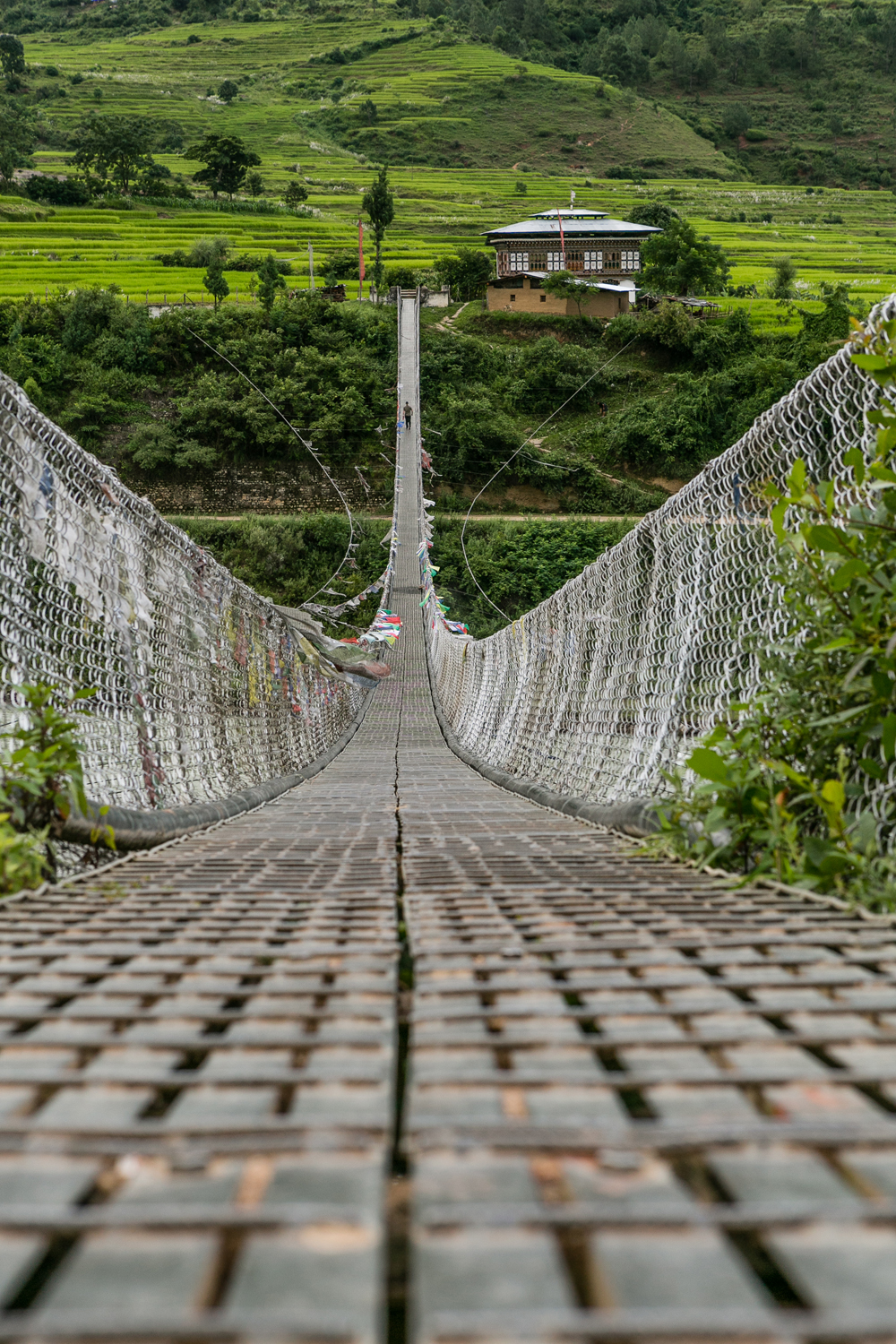 I have never had a head for heights. So the thought of hovering over the churning water of the Po Chhu river was not exactly enticing. Yet with hundreds of prayer flags to guide my way and solicit protection, I decided to overcome the mental challenge. Punakha’s bridge is the longest suspension bridge in the country, measuring almost 650 ft (200 m). It links Punakha Dzong to fields and villages on the opposite bank, allowing easy access to one of the most important buildings in the country. Does it lead to happiness? Yes – if you love heights and the feel of adrenaline pumping in your veins! 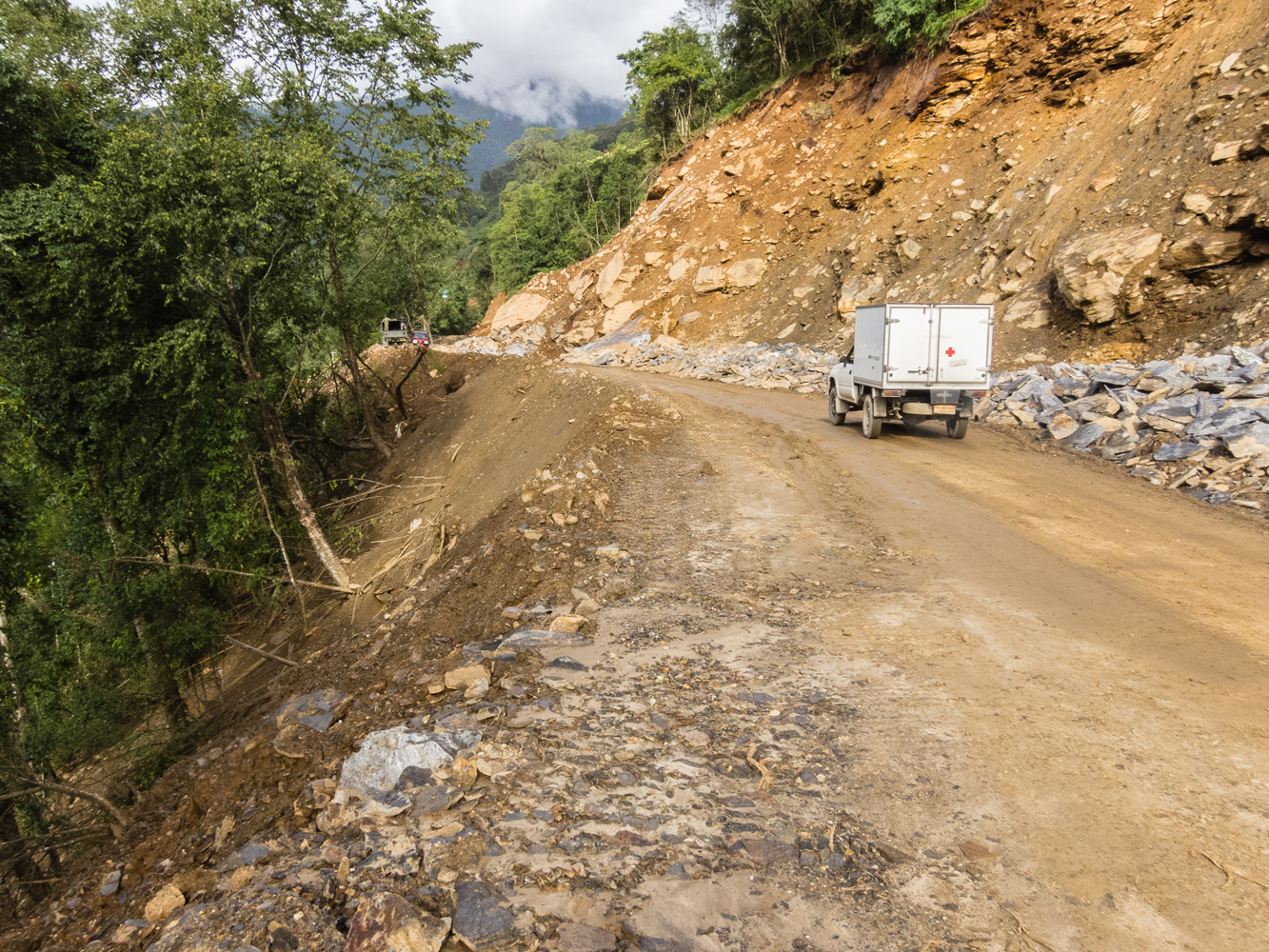 One of Bhutan’s infamous roads

“Please don’t let me be reborn as a cockroach,” I thought for the umpteenth time as I looked down at the steep incline inches away from the car’s wheels. Usually not a religious person, I suddenly felt an urgent need to believe in Buddhism’s cycle of life, death and rebirth. Following Bhutan’s world-famous airplane runway approach, which snakes through the surrounding mountains, the country’s roads are the second most treacherous part of any visit. Trucks speed along the dirt ‘highways’ which are damaged every year by rock falls and landslides following monsoon rains. Some slip over the edge, ending up at the bottom of steep ravines. It is no wonder that this mountain kingdom still remains an isolated mystery for many travelers. Yet a visit is worth the challenge – and may even make you happy.