MOST NIGHTS AT 6PM, around the time when the sun begins to recede behind Table Mountain, Salmonde goes to work. His office is a street corner located in the heart of Cape Town’s City Bowl. It was there that I met him sitting on an upturned milk crate, waiting for the evening’s customers.

“This is my job,” Salmonde told me proudly, in a thick French-Congolese accent. “I never fight, never steal, never do nothing — only look after the cars. And, after the owner gives me some [money], I find bread.”

Salmonde is a car guard. Part meter-maid, part street-corner entrepreneur, Salmonde and others like him are paid by wealthier, car-owning South Africans to keep watch over vehicles while the owners do things like buy groceries, eat at restaurants, and go to bars.

A car guard’s main objective is simple — make sure no one smashes a window or tries to steal from any of the cars he watches over. In South Africa — a country where approximately 700 burglaries are reported every day — this is not always an easy task. 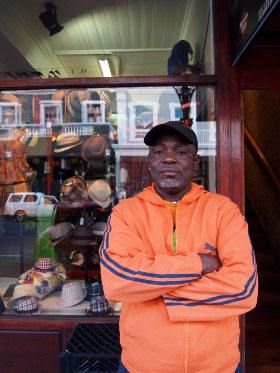 After spending considerable time in Cape Town — first as a student and then as a reporter working on a story — I found the reflective-vested car guards becoming a familiar, almost subliminal, part of the cityscape. There was the one always sporting an Arsenal jersey outside my favorite coffee shop on Kloof street, the one by the Seapoint pool who consistently smelled like liquor at 7:30AM, the one who always gave me a wave when I ran past him on my morning jogs.

But despite frequent interactions, my conversations with these figures had not exceeded the four-word mark. I’d hand over payment for watching my vehicle: “Here you go boss.” They’d graciously accept: “Thank you sister.” And that would be that.

Slowly though, together with my travel companion — a white South African who now lives in Europe — I began to see car guards in a new light. As non-locals, we were both grateful for the services they provided — helping us parallel park, waving their arms to signal an available spot on a bustling street, watching our VW Polo when we parked it on the darker side streets — but we couldn’t help but notice how often their efforts seemed to go unappreciated or unnoticed.

That curiosity is what led us to Salmonde’s street corner, where he explained that in the three years he’s been at his post, working every day except for Sunday (when he goes to church), he has developed a formula for how to do good business.

The standard rate for a car guard is anywhere from 2 to 10 rand ($1US = ~7.5 rand). On a good night, when the restaurants are fully booked and the bars are full of people, car guards can make anywhere from 80 to 200 rand, depending on location.

For some Capetonians, car guards’ constant requests for payment can become a nuisance, and an expensive one if someone parks their car in multiple locations throughout the day. For others, interactions with car guards are more of a charitable transaction, an opportunity to give money to someone who’s trying to make a living through a means other than crime or begging.

Shortly after talking to Salmonde, I met another Congolese immigrant named Ijue, whom I recognized from his post in front of Neighbourhood, my favorite Cape Town bar. Ijue told me that he liked his job and started to explain that most car guards start working in their territory or on a specific street corner when a brother or friend passes it on to them. But before he could finish, his own brother, a local security guard, interrupted him.

“Really, if he says he likes the job, I don’t think he likes the job. I know he don’t like it,” he stated bluntly. “He can like the job because he don’t have something else to do, but he isn’t enjoying it.”

When pressed, Ijue admitted to me that as an immigrant, being a car guard is about the only work he can find. In addition, he estimated that only about 50% of the people who park in his territory give him payment, while the other half choose to ignore him completely.

“Some people when they see you, they just think ‘stupid man who just come and beg,'” Ijue says. “Most of the people think like that. You can ask them for money and they just look at you like they don’t even see you. Just drive away. It happens like that.” 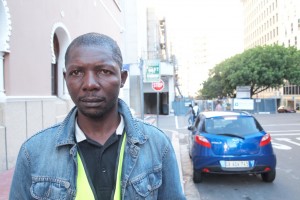 Across the street from Ijue, I met Papi, who was also Congolese. Papi was reluctant to speak about his job at first. His eyes were glazed and I could sense hardship in his soft voice. He explained how he left his family and a job as a painter five years ago to come to Cape Town — by way of Kinshasa, Zambia, Zimbabwe, then Johannesburg — and things hadn’t been going so well for him.

“I don’t like the job — small tips and too much problem from the security. They come and chase people away.”

Papi wasn’t sure why, but he said that recently security had been giving him a hard time for standing at his post. He lifted his denim jacket and showed me the reflective vest he was concealing underneath — an attempt to go unnoticed by security, but also a hindrance to doing his job.

After thanking Papi and giving him a tip for his time, we wandered back across the road for a beer. We said hello again to Ijue, who asked me for my phone number so we could be friends, and went upstairs to sit on the balcony.

From where we sat, we saw Papi walking up the road, looking like he had abandoned his post for the night.

Tagged
Cape Town, South Africa
What did you think of this story?
Meh
Good
Awesome