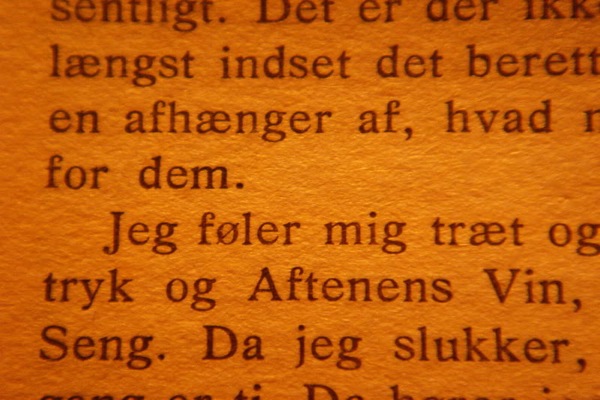 Why friends make all the difference on the path to fluency.

This was the rather dispiriting response from Kim, my new Danish flatmate, after telling him that I would be spending the coming year in Denmark trying to master his native tongue. Unfortunately, similar remarks (all in English) were common during the first few weeks of my Erasmus Study Abroad program in Århus.

Danes found it laughable that anyone would want to learn Danish, especially a native English-speaker like me. If a league table existed for the most popular Scandinavian language Danish would come bottom. Certainly it lacks the sexiness and sing-song qualities of Norwegian and Swedish, but is no means the ugly language that many make it out to be.

Looking back on it now I was fighting a losing battle, as most Danes speak English fluently, due to excellent schooling and a strict diet of American and British TV. If anything, they were learning from me, and saw my arrival as an excellent opportunity to keep their English fresh, the swines! This was not how I had imagined things going at all.

After two years of intensive university study my Danish should have been a hell of a lot better, but for some reason my grasp of it was still very basic. The prospect of living and studying in Denmark itself, therefore, was terrifying. Never mind the inevitable homesickness – how was I going to survive for a whole year with a toddler’s Danish?

“Ah, you’ll be fine. They all speak English over there, don’t they?” my friends would say.

“Yes, but that’s not the point!” I responded, shaking them in frustration.

What was the use of going abroad to learn a language and using English as a safety net? I had to master it for my university degree and I wanted to master it too. No matter how scared I was at the prospect of sounding stupid, I was determined to leave Denmark fluent.

You will understand then how frustrated I was during those opening weeks, with my aspirations slowly fading before my eyes. My insistence to speak only Danish with my flatmates had been a miserable failure and to make it worse my German friends (also fellow exchange students, who were all taking courses in English and had not planned to learn any Danish) were already fluent.

My courses at university were hardly inspiring either and left me feeling totally bewildered and dizzy, as I only concentrated on what was being said, rather than the context of the lessons. At that point it was very tempting to give in and merely revel in the careless joy of being an Erasmus student, but suddenly everything changed.

One night some friends and I found ourselves down at the student bar down by Århus harbour. We had heard there were some local bands playing and were keen to go along. The music was awful, the kind that focuses on making ears bleed rather than being entertaining, and I found myself retreating to the bar with a ringing head. While ordering a Tuborg I noticed a girl stood next to me, suffering like myself.

“De spiller alt for højt, hvad?” I shouted across to her.

She smiled and nodded, removing a finger from an ear to shake my hand and introduce herself. She was called Marie and agreed that the band in question would have us all deaf by the end of the night. After introducing myself and letting her hear that I wasn’t Danish, an amazing thing happened: breaking national law she did not immediately switch to English but carried on speaking in Danish, and even better, expressed no great surprise that a foreigner was speaking her language. I resisted the urge to hug her and weep tears of gratitude, and we continued our conversation long into the night.

Making my first Danish friend changed everything. Although I never said anything, Marie understood that I was not in Denmark just for the Erasmus parties and that I wanted to come away with something more lasting. Therefore, right from the beginning English was banned by an unspoken rule between us. Even if I was struggling to find a word or put a sentence together she refused to let me take the easy way out.

Instead she showed great patience and let me work it out for myself. The one time she did correct me caused her much hilarity. We were in a post office together one day and, unsure as to where the queue started, I asked a man

The man looked at me as with alarm and it turned out I had actually asked him whether he was “in the cow”, rather than the queue.

One night a week Marie would invite me over for dinner in her cozy flat and we would talk about all sorts of things until the early hours. What was so refreshing about this was that it didn’t feel like some sort of pre-arranged language tuition session. It was something real. It was everyday life. Finally I had fit in.

The more time I spent with Marie the better my Danish became and the more my confidence grew. I realized that doing workbook exercises and learning grammar by heart can only teach you so much and that best way to learn is to get out and meet people and just talk, talk, talk.

For a few months I had been going to a language school in town and found myself in the advanced class, which was full of Lithuanian snobs who were already fluent but who only turned up to show off. Rather than listen to them titter at my mistakes I realized that spending time with a local was a far better and cheaper way to learn.

Now that things had finally got moving I slowly began to immerse myself in the language. University classes became easier to follow and I started reading a newspaper everyday, looking up words I did not know and writing them down on note cards.

Pretty soon I could read the whole paper without the help of a dictionary and words I had never noticed before started appearing everywhere. I also listened to the radio on and soon got hooked, so much so that one day I had a visit from a radio licensing officer who demanded payment for a license.

I got in a lot of trouble for that, but at least I got some practice out of the angry words exchanged! I was even dreaming in Danish at this point (always a good sign, I’m told) and on a few occasions responded to an English friend’s questions in Danish without realizing it.

As my confidence grew I found it easier to strike up conversations with people. I made another friend called Kristian at a party who shared a love of football and we would spend literally days watching every game on TV, chatting away happily and occasionally yelling at the referee with an array of eye-wateringly strong Danish expletives.

Not every day was a good day for me in language terms. For some unknown reason I suffered from temporary Danish amnesia. One day I would be discussing the news with Marie and Kristian, and the next I couldn’t even understand the simplest questions put to me.

It was as if something in my brain had been temporarily unplugged and it used to get me really down. Infuriatingly on days like these my flatmate Kim would suddenly choose to speak to me in Danish, and when he perceived I hadn’t a clue what he’d said he would laugh in my face.

“Oh yeah? Well you’ve got a girl’s name!” I always wanted to shout at him.

Leaving Denmark was incredibly difficult. By the end of the academic year it had started to feel like my home and I was on the very cusp of being fluent in the language. On the plane home I got talking to the two girls next to me. They had noticed my Roskilde Festival wrist band and we laughed about how muddy and fun it had been. Eventually one of them asked me why I was going to England and I replied:

“What?!” one of them shrieked “We thought you were from Århus!”

If ever there was a time for a high five, that was it.

Tagged
Languages Narrative Denmark
What did you think of this story?
Meh
Good
Awesome

Wyoming is for the wild ones

This map shows hilarious literal translations of places in Denmark

Denmark’s population is aging, but check out their hilariously easy fix