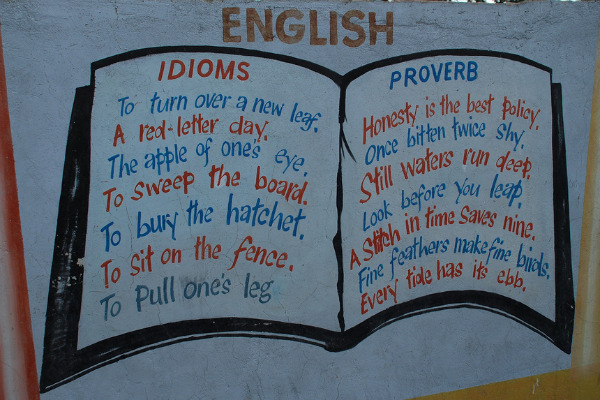 ESL teacher Anne Merritt considers what place slang and idioms should play in the classroom.

I once had an ESL student who had spent a year working in Miami. In my upper-intermediate class, alongside peers who had studied English formally for years, did he ever stand out.

One day, we discussed celebrity worship. “I think when people gossip about celebrities, they will gossip more in their own lives, about friends,” one student shared.

The Miami transplant perked up. “Shit, man, I saw so many famous people in Miami. Listen, you know that tennis player? What’s her name? The ugly chick? I saw her, man, it was nuts!”

Man? Chick? Shit? The rest of the class started flicking through their dictionaries, baffled.

We had made a list of new vocabulary on the board. Gossip, idolize, tabloid. Now, we were adding to it, with “It was nuts!” and (to my grave discomfort) “chick.” The students were insistent though. These terms, they said, must be useful too, if their classmate picked them up.

How important is slang in language learning? I’m not just talking about the four-letter words, though heaven knows they come up often. I’m speaking more broadly than that, to colloquialisms (gimme or ain’t), idioms, (hit the road) to the pop culture bits so embedded in our way of speaking (You can’t handle the truth!). 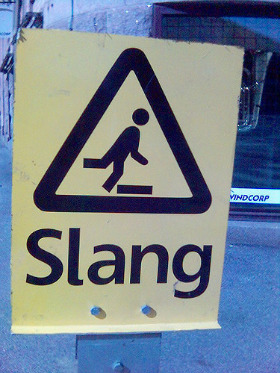 On one hand, slang is unavoidable, no matter what language you’re speaking. The phrase “worst movie ever” may not show up on BBC’s website anytime soon, but you’ll see constructions like these daily on Facebook and blogs. What’s more, communication mediums such as texting and Twitter are moving so far from formal language that even native speakers can have trouble figuring out messages like “word” and “big up.”

Let’s take a language student, attending daily classes. They study the grammar, the formalities, the subtle differences between look at and watch. They might produce lovely coherent sentences and conversations. Take this student out of the classroom and away from the textbooks, though, and they will encounter a world of language that breaks those rules. In advertising, online, and in conversation, language becomes far less structured. Taking the time to understand slang and informal speech might save someone a whole lot of confusion. In understanding and in speaking, it will allow that student to use language in a current way.

I can attest personally to the slang handicap. I studied French for fifteen years. Conversing with shopkeepers is a breeze, but a night out at a bar leaves me feeling like a scared student all over again, the speech is so different from the textbook stuff. I can read books in French, but can’t get through an article in French Glamour without a list of new terms; the slangy colloquialisms that are never taught in school.

Of course, there are some potential obstacles when you try to learn slang.

Slang is also ever-evolving, and terms can grow outdated.

For one thing, learning a language is hard enough! Remembering vocabulary and syntax is a job in itself, especially when elements of the language don’t exist in your native tongue. Attributes like tonality and honorific speaking, for example, can throw native English speakers into spirals of confusion, since they don’t exist in English.

With slang, there also comes a whole sliding scale of social appropriateness; one that can vary, confusingly, from person to person. I wouldn’t use “bullshit” or “asshole” with family; some native speakers might. One wouldn’t type “gimme” or “gonna” in an email to a professor, though the terms might be used orally in a class discussion.

Slang can also toe the line between casual and offensive. Personally, I loathe the terms “retarded” or “gay” when used in the pejorative sense. As a teacher, I would reprimand any ESL student using those terms, and yet that student probably hears them used quite casually by native speakers on a daily basis. What’s offensive or uncomfortable to some is just conversation filler to others. It’s a murky area; one in which even native speakers will slip up. Trying to navigate the best time and place for slang terms can bring about enormous confusion for a language learner.

Slang is also ever-evolving, and terms can grow outdated. Though “It’s raining cats and dogs” and “I’m so hungry I could eat a horse” are go-to idioms in any ESL textbook, how often do people really say them? It might be futile to memorize phrases that are rarely used, or are used only with a certain generation of people. 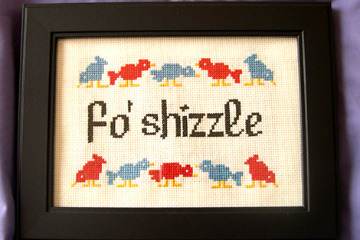 Slang terms can also vary regionally or nationally. In English, money can be “bucks” or “quid.” Food can be “chow” or “nosh.” Common slang in one country can be unheard of in another. I once had a German roommate who had studied in England but lived with Canadians for years. When he spoke, he would deliver British slang in the twangy Canadian accent that he had adopted. “Are you taking the piss, mate?”, spoken in an Ontario lilt, sounds hands-down ridiculous. What’s more, in some parts of the English-speaking world, that sentence would not be understood at all.

The effectiveness of slang also depends on your conversation partner. If you’re learning, say, Vietnamese or Finnish, you’ll likely converse mostly with native speakers who have a ready understanding of slang. Widespread languages like Arabic or French, though, are often conduits for communication between people who don’t speak one another’s language. A fellow language student may understand the language but not the slang. My ESL student with the ugly tennis player story is a good example; though I understood him clearly, his fellow English learners did not.

We’ve all met travellers who have picked up English exclusively through television and rap lyrics. They’re the ones who swear like sailors and talk like a Fresh Prince Mad Lib, with terms like fly and bro being emphasized unnaturally.

In the end, I think slang’s relevance depends on the language student’s goals. If you plan to attend university abroad, then formal language is what you’ll be using daily for essays and formal emails. If you’re using that foreign tongue for work, you will also need to communicate formally and properly. If, on the other hand, you’re learning a language in order to simply get by and socialize in a foreign place, you’ll encounter and use a lot more slang.

Slang will always come up in the language learning process. It’s important, yes, but not more so than the proper mechanics of a language. We’ve all met travellers who have picked up English exclusively through television and rap lyrics. They’re the ones who swear like sailors and talk like a Fresh Prince Mad Lib, with terms like fly and bro being emphasized unnaturally. It’s a bit charming, but a bit impractical too.

Slang is, I suppose, like the junk food of language. Some seem to survive on it exclusively, some abstain completely. However much or little you like it, I don’t think you’ll get far without taking in the basic sustenance first.

Celebrate this Fourth of July like the first Americans 30 awesome Japanese idioms we should start using in English 9 boardless, cardless games to play anywhere 21 amazing images of the new Seven Wonders of the World What you should and shouldn’t do in Amsterdam’s red-light district