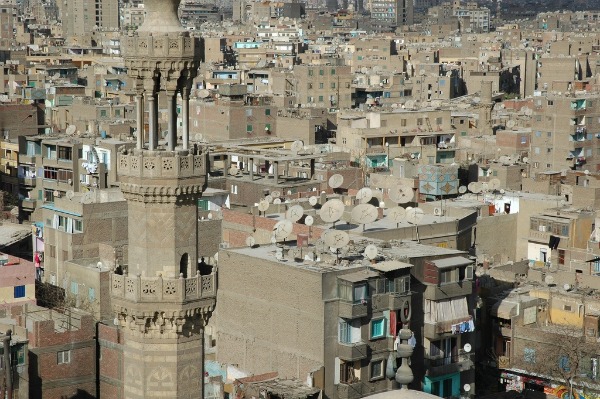 Meeting an Egyptian during a visit to Cyprus causes Theresa Everline to consider what it means to represent her adopted city abroad.

“Egypt is wonderful,” I said. This was a lie.

Ten minutes prior, I had taken off my shoes and walked alone into a mosque.

The guidebook described the building as architecturally interesting, but it looked rather mundane. As was usually the case with mosques, the space was mostly empty. Rugs covered the floor. A few wires dangled across the ceiling, intersecting like depictions of two-lane highways on a map.

This mosque was in Cyprus, the Mediterranean island that’s been divided since 1974 between a Greek-speaking south and an internationally unrecognized Turkish-speaking north. A few weeks before my visit the northern government had made it easier to cross the Green Line, the desolate, frozen-in-time ribbon of land separating the two sides.

The idea of exploring this curious anteater-shaped island with the world’s only remaining divided capital seemed irresistible, so I booked a ticket.

Heshem explained that he tended the mosque and owned a shop where he sold Egyptian-made furniture. Then he offered me tea. In Arab culture, one can’t refuse tea..

One afternoon I headed north and wandered a country that according to most of the world, technically doesn’t exist. The rest of the time I spent in southern Cyprus, and along with meandering through mildly interesting museums and seeing other sights, I sought out the few mosques – the tiny buds of Islam that still survived in the Greek Orthodox Christian south.

One quite lovely historic mosque sat next to a salt lake where flamingos gathered like puffs of cotton candy against the landscape. But this mosque where I was standing was just another mosque, a white and hushed box.

Then a bearded man came in. He stopped short when he saw me. I smiled. Maybe he spoke Greek or Turkish, but we were standing in a mosque, so I made a quick calculation.

He quickly nodded his head. “Alykum wa salaam,” he answered.

I paused, then with a tilt of my head said, “Bittikallim Araby?”

His eyes showed surprise. A slight blond woman had just asked him if he spoke Arabic. His head poked forward inquisitively.

“Shweya,” I said with a shrug. A little. I’m from America, I continued in my bad Arabic, but I live in Cairo.

His eyes widened again, and he walked towards me. “Masr?” he said, using the Arabic word that refers to both the country of Egypt and its capital. “Ana men Masr!” he said triumphantly.

I had been living and working in Cairo for nine months – living fairly unhappily, to be honest. On a much-needed break from Egypt, I had managed to run into probably the only Egyptian in southern Cyprus.

It turned out that Heshem, as I’ll call him, spoke a little English, and along with my limited Arabic I managed to explain that I was visiting Cyprus for a few days. I left out the part about how Cyprus was the nearest country to Egypt that wasn’t Muslim, so it had bars, and those bars served alcohol, and I had been sitting in those bars every night, drinking their alcohol. 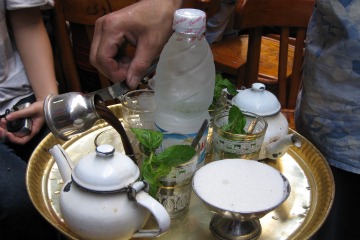 Heshem explained that he tended the mosque and owned a shop where he sold Egyptian-made furniture. Then he offered me tea. In Arab culture, one can’t refuse tea.

Thus, we headed out of the mosque and I followed Heshem a few blocks to his cramped shop. Scattered around haphazardly were chairs, tables and knickknacks, ornate and elaborate in the fussy Egyptian style.

He made tea and brought it out on a silver tray, serving it the way it was always served in Egypt, in clear glasses without handles.

That ancient country packed with remarkable treasures could thrill me. Now and then.

But mostly my feelings toward the place came down to exasperation and annoyance. Cairo was a cluttered, unattractive city whose men constantly harassed and grabbed at me. Small wisps of the oldest parts of town were breathtakingly beautiful, but generally stout, half-finished concrete buildings sprouting rebar crammed the city.

Before I arrived, I assumed Cairo would be exotic, whatever that means. But it turned out to be a city of Stalinist-looking grey structures where I commuted to work in the women’s car of a crowded subway, consistently the object of stares. It got tiresome.

But facing Heshem, I realized what he saw at that moment: a connection to his home country. At that moment, remarkably, I represented Egypt.

And so I said, “Egypt is wonderful.”

Heshem hadn’t been back to Egypt in three years. I was returning there the next day.

“It must be difficult for you sometimes,” he acknowledged.

Yes, it was difficult. We ran through some other small talk and sipped tea.

Yes, I’d sailed on a felucca on the Nile. Yes, I had Egyptian friends. No, I was not a Muslim. It was the random, mildly awkward, effortful conversation of strangers trying hard to fill the silent gaps.

We finished our drinks and I thanked him. He was a kind man. 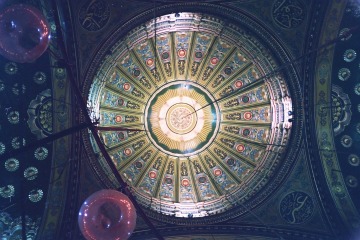 After I left him, I lamented how all the fleeting sweetness I had experienced in Egypt over the last nine months was cancelled out by its dismaying aspects.

I felt bad that I had lied to Heshem. But then again, I had told the lie after meeting him in one of the mosques I had sought out in southern Cyprus because, on some level, mosques had taken on a sense of the familiar. Even the comfortable. Maybe I needed to stop treating Egypt like a nonexistent place within me.

The next day I landed at the Cairo airport and got in a taxi. As we were pulling out of the airport’s parking lot, the driver looked in the rearview mirror and crooned, “Hallooo!”

Immediately I cloaked myself in the leave-me-alone body language I wore in Egypt. Overly friendly cab drivers who turned nasty over fares, lumpy cab seats with no seatbelts despite harrowing traffic, hot and grimy air rushing in from a window that won’t close — none of it was wonderful.

But all of it I recognized.

What kind of complicated emotions have you felt living abroad? Share your experiences in the comments.

Tagged
Expat Life Cairo, Egypt Cyprus
What did you think of this story?
Meh
Good
Awesome

10 sexual practices from around the globe that remind us the world is a big, beautiful place
The 15 best digital nomad visas from around the world
This new, glass-domed train will take you on an epic journey through the Rocky Mountains
7 picture-perfect Irish villages we want to escape to
The truth about artificial vanilla extract (and why you should always splurge for pure)

The 15 best digital nomad visas from around the world

What it’s like visiting Nicosia, Cyprus, the last divided capital on Earth

Tales from the road: Hong Kong, Bangkok, Cairo, and Jamaica